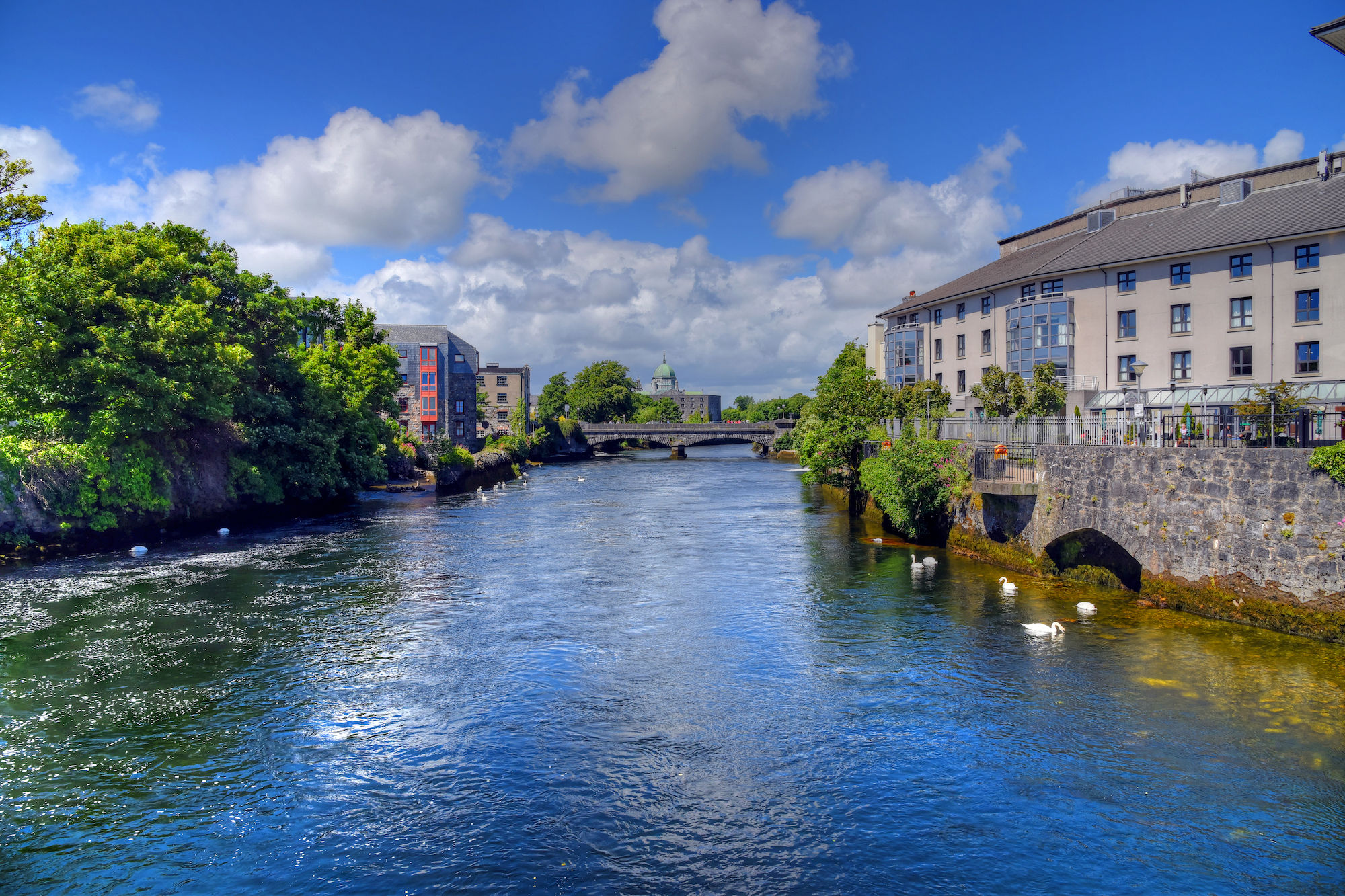 Nature, like everything else in a densely populated urban city, is controlled. Our limited contact with the green and great beyond is always obstructed by buildings that erupt from the ground like fangs, where each skyscraper carries a blinking beacon that tries to alleviate the grey-washed landscape with pale imitations of light and life. As much as we convince ourselves that the buzz of the metropolis is the force that pumps through our arteries, even the most diehard city lover will need a good dose of the wild outdoors for some respite.

We aren’t suggesting you go for a hike through the Amazon rainforest, or go recreate The Revenant in a frozen tundra (although you can if you want to). Instead, take a trip to a place that hits the sweet spot in between — a small city destination that grants you easy access to nature in all its glory. While most of us in Asia think of Osaka, Busan, or Bali as convenient options, our recent trip to Ireland saw Galway City stand out as the definitive choice if you ever visit Europe.

Located in County Galway, Galway City has achieved international acclaim thanks to Ed Sheeran’s chart-topping song, Galway Girl. The humble fishing village-turned-port city in the West of Ireland is not the ganglion for quick, cheesy romance as Sheeran suggests. Instead, it has made a name for itself as a charming locale with a proudly Irish culture that celebrates art, music, and of course, pub life. Galway City is also one of Ireland’s few doorsteps for the Wild Atlantic Way, a coastal route that spans nine counties, spotted with natural marvels in between.

Walk out of the city by the Spanish Arches, passing its snaking cobbled streets, and classic Hibernian shophouses, and you’ll find yourself at the Galway Harbour in 10 minutes. The picturesque dock beckons a walk to Mutton Island, where you’ll cross a long pier that slices the still River Corrib and the crashing Atlantic Ocean — a small tease to everything else the beautiful area has to offer.

If you do choose to visit, here is our guide to Galway City.

If you think of food in Ireland, you’ll immediately recall homely stews, pies, pub lunches, and lip-smacking fry-ups for breakfast. While those remain the backbone of the island’s culinary heritage, many younger restaurants have popped up in recent years to offer something different. Pub lunches or a delightfully greasy fish-and-chips platter should be on your to-eat list in Galway City, but its booming food scene has plenty more to offer as well, including these places that celebrate national produce with a fresh edge.

Located at the Spanish Arch, Ard Bia at Nimmos is a restaurant that transforms fresh farm-sourced ingredients into dishes that bear a European, Mediterranean and Middle Eastern flair. It is fusion done right, as well-thought-out flavour combinations dominate its menus, be it the seasonal dinner selection, or its regular breakfast and brunch options. Judge us all you want for this, but Ard Bia’s avocado and eggs, served with homemade sourdough, sandwiched with a thick slice of Colleran’s streaky bacon and a side of organic spinach, is a meal that will explain why millennials can’t afford houses. Vegan and gluten-free food are also easily available here.

Celtic-Japanese cuisine is a rare culinary breed offered by Kappa-ya, a restaurant on Middle Street. The décor is typically Japanese, and a visit during lunchtime will offer you a menu that is familiar enough — don bowls and sushi made from local Irish seafood where possible, and housemade tofu — but come on a weekend for dinner, and chef Junichi Yoshiyagawa flexes his culinary chops to create seasonal menus that are as inventive as the cuisine type he has pioneered.

Expect dishes that spark your tastebuds — a clear broth made from pink clams, dashi, lime and lavender; or lamb marinated in miso and blue cheese, then grilled with a kumquat and clove marmalade are a couple of offbeat examples.

One Michelin-starred Aniar centres its dining philosophy on the terrior of Western Ireland and contemporary Irish produce. Whether wild or farmed, anything edible from land, sky and sea will find its way to onto Aniar’s tasting menus, which change daily, depending on the season, availability of produce, and whatever inspires the restaurant’s chef-patron, JP McMahon, that day.

The dedication to showcasing the best of West Ireland through gastronomy is so ingrained into Aniar, that every daily menu contains a neat list of the suppliers and farmers who provided the raw materials for your meal. Also, the wine list is a treasury boutique of old and new world vintages, with 20 bottles available by the glass for your sampling pleasure.

We know it’s technically cheating to list a restaurant in Moycullen on a guide to Galway City, but multi-award-winning White Gables is so good, the 15-minute drive out is worth it. You might mistake the white stone cottage it is located in for a home, but keep an eye out for the restaurant’s sign, and you’ll walk past its doors into a time warp from the ’80s. White Gables is a deliberate blast from the past, and it does tradition so much better.

Sure, the steaks, roast meats, chicken liver pâté on toast, and ham with melons on the menu aren’t exactly groundbreaking inventions, but White Gables’ dedication to fine ingredients and cooking with soul is the reason behind its three-month-long waitlist. The curated wine selection is also one of the best in the county.

An Irishman told us this joke, “Every Irish village only needs two important buildings: The church, and the pub.” Catholicism is so deeply ingrained in Irish culture, history, and identity, that it is borderline impossible to visit any area in the country without running into a religious monument.

The religious epicentre of Galway City is its stunning cathedral, which even the most secular of travellers can appreciate. The whole structure is built from Irish limestone, and its vast hall, where mass is conducted daily, has a mosaic floor constructed entirely from Connemara marble with impressive rose windows that cast a soft glow onto the pews on sunny days. Fun fact: Before the cathedral was built in 1958, the site used to be occupied by the city prison.

A walk around Galway City is riveting enough, for the city is lively all hours of the day, but the Latin Quarter is where you want to be. As a hub for most of Galway’s best-known restaurants and pubs, the historic area is rife with buskers providing the tempo for the local Galwegians bustling about.

The area, which extends from the Spanish Arch to Middle Street, is also an artistic and cultural nucleus. Alongside its many handicraft and antique stores, the Latin Quarter is also home to the Galway City Museum, where entry is complimentary throughout the three exhibition floors that tell the story of the city since its early tribal days, and the Druid Theatre, where regular plays are staged, including its acclaimed rendition of Samuel Beckett’s Waiting for Godot.

Those hunting for a bar that plays Irish music can look no further than Tig Coili, whose bright red shopfront will call you from a mile away. Irish musicians perform all days of the week, and when you couple that with friendly staff, as well as heady pints of Guinness fresh from the brewery, you’ve got a recipe for an unforgettable night.

Ireland’s prominent literary culture is evident in the independent bookstores that pepper the island’s main cities. Bibliophiles will find Nirvana in Galway City’s Charlie Byrne’s bookstore, which houses a pulse-stopping 100,000 books, spanning brand new, early edition and secondhand books for the taking. Whatever your interest may be, you’re bound to find something there. Charlie Byrne’s also has one of the most extensive selections of books of Irish persuasion, if you’re keen on local literature.

With swollen shelves that scrape the ceiling, any self-respecting book lover is bound to feel overwhelmed, so turn to Charlie Byrne’s helpful staff for advice, or simply walk to its curated book club selections by the front door for a quick pick.

Just a couple of hours outside Ireland is Connemara, one of the regions that still bears a firm connection to indigenous Irish culture, where some villages within still speak the native language. Drive through the rugged landscape and bask in the tranquillity of nature as you pass the Twelve Bens mountains and peat bogs as you make your trip to the Wild Atlantic Way. Don’t pass up pit stops at its charming coastal towns, where we suggest you book an overnight stay at its homely bed and breakfasts. Clifden and Roundstone were particular favourites.

Fans of hikes can choose to climb up Diamond Hill in the Connemara National Park. It is about a two and a half hour climb up to its 442-metre summit, then down again, with plenty of forest animals to spot along the way. The less adventurous can walk the grounds of Kylemore Abbey instead. The 40,000-square-feet castle was originally the home of a British doctor, who commissioned the construction of the castle and its neighbouring five-hectare Victorian Walled Gardens for his beloved wife.

Another one of Ireland’s postcard-perfect destinations is the Cliffs of Moher, one of the country’s most-visited destinations. Located just off Liscannor, about an hour and a half drive from Galway City, the geopark makes for an easy hike across the entire circumference of the Cliffs. Fans of Harry Potter will be keen to know that Half-Blood Prince was filmed here.

Galway City is dotted with hotels, so it isn’t a challenge to find accommodation. Aside from these hotels, Airbnb, as well as bed and breakfasts make for popular choices.

Just a quick walk away from both the city’s coach centre and train station is Hotel Meyrick, a Victorian edifice that has been around since 1852, but has since upgraded to become an acclaimed hotel that melds old-world charm with excellent amenities and service.

A three-minute-walk from Eyre Square is The Galmont, an expansive compound with 262 rooms that overlook the serene Galway Bay. The modern hotel is home to the award-winning Spirit One Spa, an underground sanctuary where you can find solace through quality massages after a long day out sightseeing.

We were told that Ireland is the only place you will experience four seasons in a day, so weather is unpredictable. Bring an umbrella or sturdy poncho along as strong winds and drizzle are common occurrences. Also, don’t expect too much sunlight.

Galway City and its neighbours have a frequent schedule of local festivals during its warmer months. Food festivals are common, with the most famous being the Galway Oyster Festival in September. Art bonanzas and street markets are also worth patronising. You can check out the events calendar here.

Flying to Shannon Airport from your country is the most direct, but Galway is easily accessible from any part of Ireland with an inter-city bus or train service.

Aramsa Garden Spa Ireland Latin Quarter galway guide to galway county galway galway city ard bia nimmos the meyrick hotel galway the g hotel and spa galway west ireland wild atlantic way white gables connemara cliffs of moher aniar galway cathedral the galmont
Beatrice Bowers
Features Editor
Beatrice Bowers writes about beauty, drinks, and other nice things. When not bound to her keyboard, she moonlights as a Niffler for novels and can be found en route to bankruptcy at your nearest bookstore. Don't tell her boss.
Drinks Beauty
Sign up for our newsletters to have the latest stories delivered straight to your inbox every week.