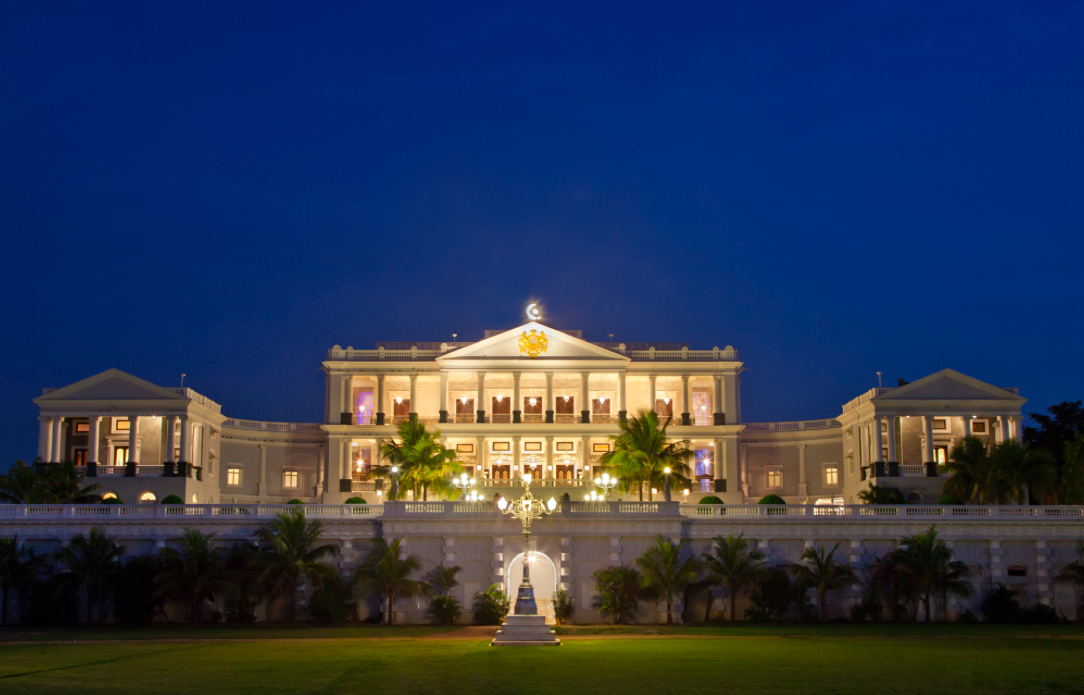 Royal retreat: 5 palace hotels for a luxurious stay in India

Travel
Royal retreat: 5 palace hotels for a luxurious stay in India
Share this article
Next article

After partying too hard at Thailand’s best beach destinations this summer, it’s time to take it easy on your next trip. A relaxing sojourn in India, where you can pamper both your mind and body, sounds exactly what you need. From amazing food to the iconic Taj Mahal, there’s a smorgasbord of reasons why India should be your holiday destination this month.

Bounded by the Indian Ocean in the southern part of Asia, there is perhaps no other country that leaves a deep, lasting impression on a traveller than India. More than just the birthplace of yoga, it also boasts a storied history and fascinating culture.

While India has often been considered as a backpacking destination, it can actually be explored and experienced in the most lavish of ways. Our recommendation? Palace hotels, which feature remnants of royal courts, so you can imagine the opulence and splendour of its early ages. And for a week or two, you can live like a royalty in these spectacular palaces, many of which have since been converted into extravagant heritage hotels. Providing modern amenities without losing their old-world charm, these palatial accommodations in Hyderabad, Kolkota, and Jaipur have everything you’ve always dreamed of. It’s easy to feel like royalty as soon as you arrive in a horse-drawn carriage for a stay at Taj Falaknuma. Overlooking the city, Taj Falaknuma Palace exudes romance and grandeur that easily makes it one of the finest palaces to visit in Hyderabad. The palace of Nizam, who was once the richest man in the world, was built in the shape of a scorpion in 1894. The 32-acre property has since been renovated into a five-star luxury hotel with 60 lavishly decorated suites. Each room shares spectacular views of the extensive lawn courtyard and the 400-year-old city, especially at night. Known as the grand dame of Chowringhee (a neighbourhood in central Kolkota), the Oberoi Grand is an iconic landmark situated near the central business district and bustling markets in Calcutta. The hotel was built in the late 1880s, and its Grand Ballroom is the largest pillarless ballroom in the city. Its comfortable rooms are decorated with old prints, and miniature paintings that reflect the city’s rich heritage.

Must-do hotel activity: Indulge in an opulent breakfast spread every morning at the new 363 Restaurant and Bar, which has replaced the old La Terrasse. Aside from Indian cuisine, it also includes dishes from the long-established Chinese community in Calcutta. 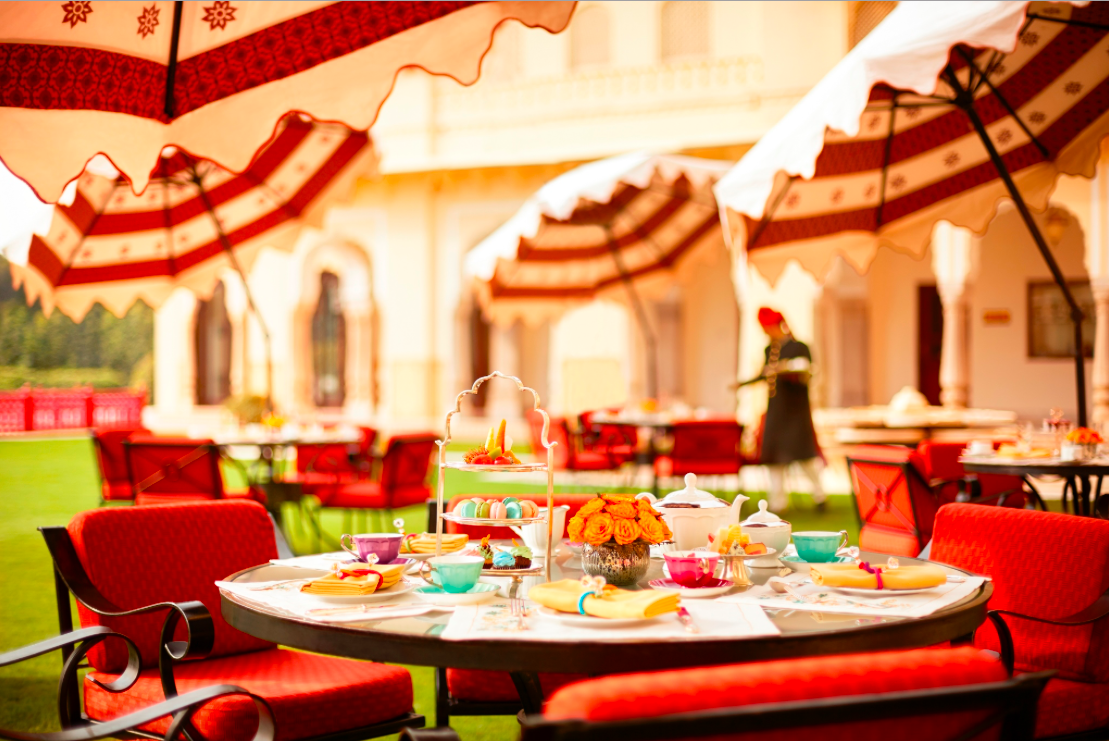 Many of India’s oldest palaces can be found in Jaipur. And the Rambagh Palace is definitely the grandest in the city. A former hunting lodge for royals, the palace hotel sits in a 47-acre plot just south of the city centre with a stunning courtyard, croquet lawn, and a grand fountain. Also once a royal residence to the great rulers of Jaipur, it boasts extraordinarily high ceilings, and abundant pieces of mahogany furniture and other antiques. Aside from the courtyard, much of the property’s original structure has been maintained, including its arcades as well as indoor pool.

Must-do hotel activity: Every 8pm, you can have a chat with the resident astronomer on the front lawns, or hire a vintage car for a tour of the city. 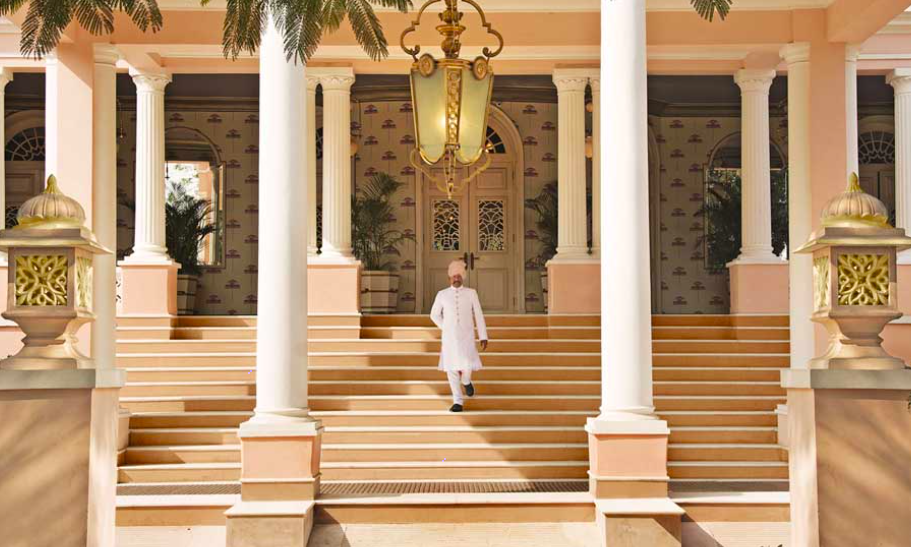 Hailed as one of the most photogenic hotels in the world, this 250-year-old palace with 14 meticulously refurbished apartments, suites and rooms is not to be missed in Jaipur. Set in the extensive lawned gardens inside the old walled city, the property used to be home to Jaipur ruler Sawai Jai Singh II. From unique hand-crafted wallpapers to mirrored doors, exuberant modern architecture has replaced the old grandeur of the luxury property. Even the smallest rooms look palatial with their soaring ceilings. The sitting areas are scattered with books, photographs, and curiosities that can be found in a typical English country house.

Must-do hotel activity: Dine like a royal at the Orient Occident, an upbeat room with 51 shades of pink wallpaper in tribute to the Pink City that is Jaipur. One of the most romantic spots in the world, this 18th century white marble palace floats like a vision in Lake Pichola in Udaipur. Built as a summer escape for a prince in 1743, it was converted into a luxury hotel where James Bond’s Octopussy was filmed. Chandeliers, silk drapes, and antique furniture decorate each of its 66 palatial rooms and 17 grand suites. Guests will enjoy breath-taking views from the neighbouring City Palace, as well as Aravalli and Machla Hills.

Planning a micro wedding soon? Here’s where you can host an intimate mini-matrimony