Where to stay in Brooklyn, one of New York’s most eclectic boroughs

Travel
Where to stay in Brooklyn, one of New York’s most eclectic boroughs
Share this article
Next article

In every city, there’s bound to be an artsy, more hip neighbourhood that most would flock to in search of the less mainstream. For New York City, that neighbourhood is Brooklyn.

However, the area is now well and truly gentrified. Once the grittier sibling to the more upmarket Manhattan, this New York City borough is coming into its own, drawing just as many visitors.

The fact that it’s calmer and greener than most parts of Manhattan is also one of its biggest allure. Snazzy restaurants and bars are increasingly making their homes here and even the prestigious Soho House couldn’t resist but place its latest outpost, Dumbo House, in the neighbourhood.

This growth has also meant that some of the area’s last warehouses have been snapped up to become what is now a new generation of hotels. Still, these high-design locales aren’t forgetting their roots anytime soon; you can expect an artsy, laid-back Brooklyn vibe no matter where you go, alongside a subtle homage of the building’s manufacturing roots. Williamsburg might’ve seen most of its grit polished up thanks to rapid gentrification, but The Hoxton isn’t ready to give up on its edginess just yet. Built on the site of the former Rosenwach water tower factory is the new nine-storey establishment, which besides retaining its original industrial elements have also gone to lengths to preserve the factory’s old carriage house.

All of its 175 rooms are a masterclass in space usage, and each are blessed with views across the river to Manhattan and Brooklyn from the comforts of your slick confines. As a hipster-approved brand, this Hoxton follows the business model of its other establishments by creating a homely atmosphere, with a coffee bar tucked within the lobby for a convenient pick-me-up.

The Hoxton sits alongside a long list of hip coffee shops, cocktail bars, and restaurants, so you’re in the right place if you’re on a foodie trail. Another hotspot right in the heart of this trendy district is The William Vale, and you won’t miss it. The 183-key hotel has taken over 13 floors of one of the area’s most distinctive buildings, dreamt up by architects Albo Liberis with every intention of veering off the usual industrial vibe. The result is an ‘urban resort’ that’s equal parts futuristic and snazzy, with light interiors that echo the building’s sense of lightness.

Its pool is the largest hotel pool New York can offer, and makes for a plush hangout spot for the four months of the year it’s open, from July to September. Dining options are aplenty too; food and drinks are curated by two top Michelin-starred chefs, and moods at these eateries can range from casual chic to modern glam. Wythe Hotel is another that’s nailed the industrial aesthetic that’s so defined the enclave. Set within a century-old factory, the light-filled property celebrates the best of Brooklyn — bare bricks and all.

Its 70 light-filled rooms are spacious and laid-back, with polished concrete floors and cast-iron columns that extend the factory chic theme within. The beds are custom created from reclaimed ceiling timbres, and the fact that the hotel has its own in-house curator who handpicks art for the entire space makes it clear why it attracts mainly the creative-type millennials.

For food, look no further than its ground-floor restaurant and bar Reynard, which is helmed by executive chef Christina Lecki, who’s trained under April Bloomfield of London’s The Spotted Pig fame. Stunning views of downtown New York and beyond aside, 1 Brooklyn Bridge is one of the city’s finest living options for plenty of reasons. As an eco-friendly establishment, the hotel integrates natural materials both inside and out, so expect plenty of greenery and raw design cues throughout.

The hotel offers a wide range of facilities, but you’ll be inclined to spend more of your sunny days by its pool, which besides being vantage point for more Manhattan views is also an easy photo-op. The rooftop bar is known amongst locals to be one of the best around, while the Bamford Haybarn Spa offers treatments using restorative and natural ingredients.

If you’re a hardcore tree-hugger, you’ll rest easy knowing this hotel operates entirely on wind power and gets its water by irrigating rain from Brooklyn Park next door. 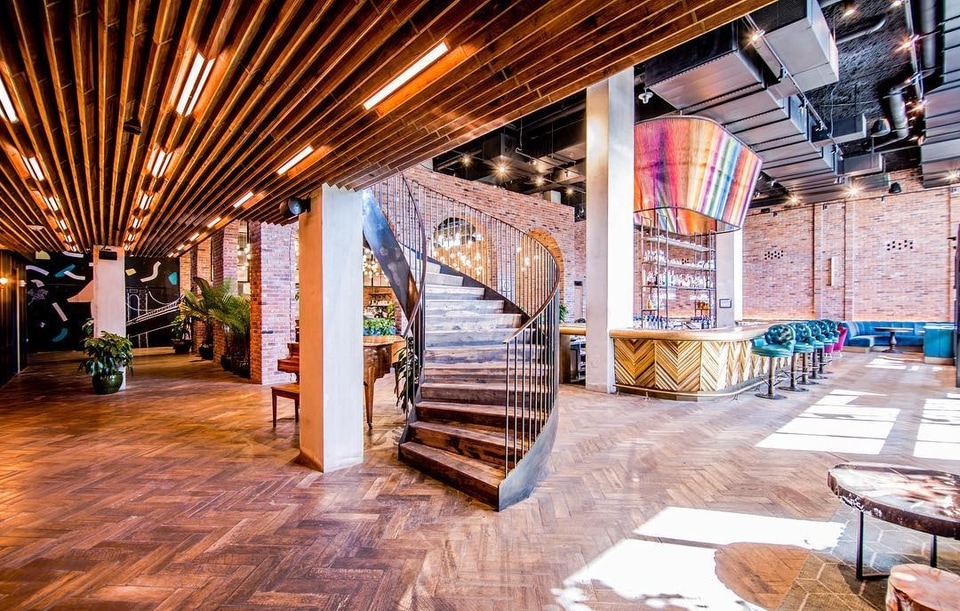 Like many other hotels in Brooklyn, The Williamsburg Hotel is a masterclass in surprises. After all, its red-bricked facade doesn’t let in the fact that its chockfull of plush velvet sofas, a grand central copper bar, and custom-designed toile wallpaper designed by Mike Diamond of the Beastie Boys.

Rooms are just as eclectic; white walls and freshly-pressed linens are punctuated by pops of bright colours everywhere, from the cushions to the bathroom tiles. Those who have trouble settling into a new environment will enjoy the sound machine, which offers the soothing sounds of rain or waves to calm the mind after all the city bustle.

The Harvey restaurant serves up trendy NY-approved bites such as avo-toasts and bagels at breakfast, and then pizzas and pasta by dusk.

Travel Hotels New York north america Brooklyn
Shatricia Nair
Managing Editor
Shatricia Nair is a motoring, watches, and wellness writer who is perpetually knee-deep in the world of V8s, tourbillons, and the latest fitness trends. She is fuelled by peanut butter and three cups of coffee a day.
Motoring Wellness Watches Beauty Style