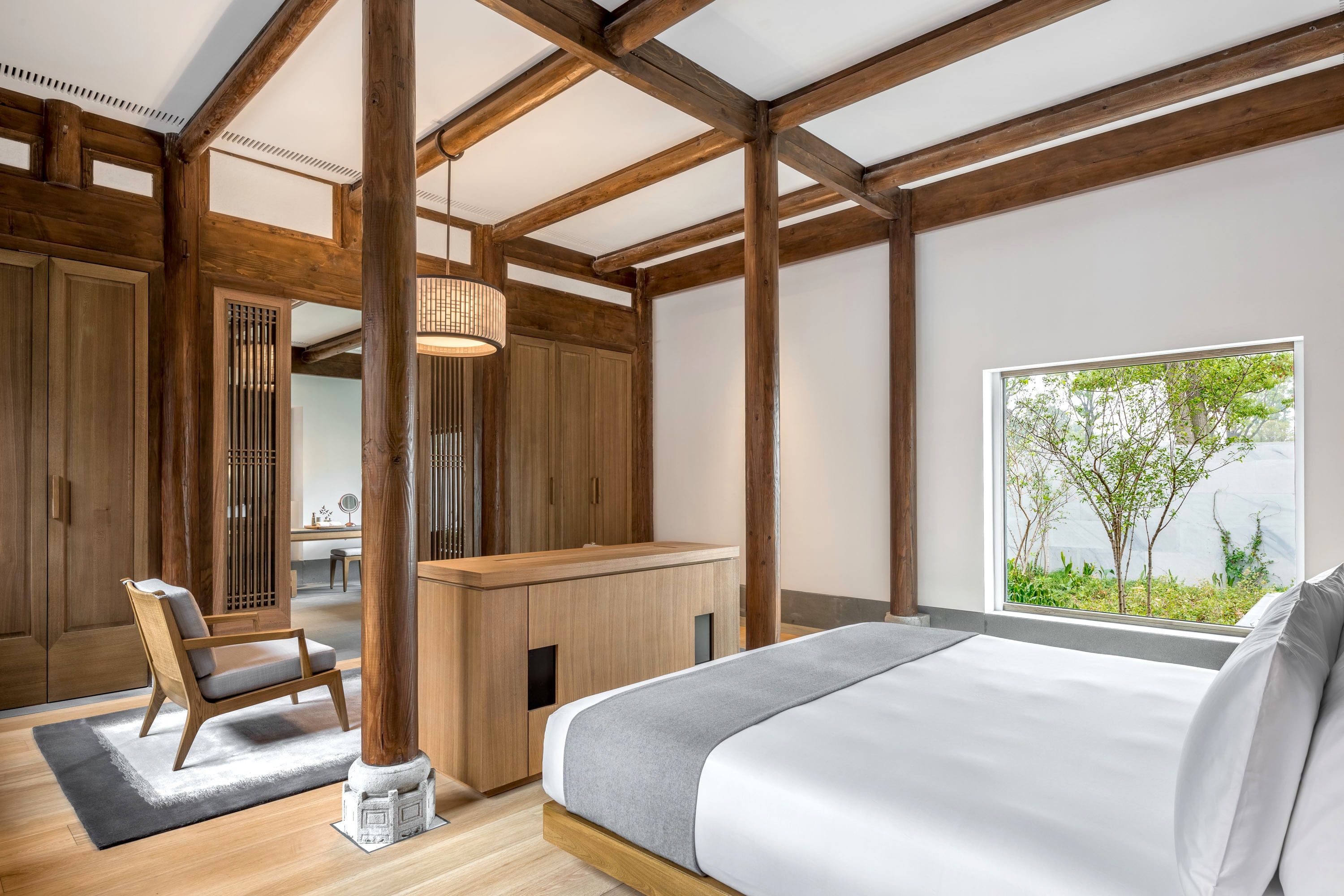 If a weakened yuan and ongoing China-U.S. trade hostilities are cause for concern, then Shanghai property developers certainly don’t seem perturbed. Since Q2 of last year, China’s international financial hub has welcomed an ever-increasing number of eclectic hotel properties. From The St. Regis to a new chapter of W Hotels (overlooking the iconic Huangpu River) the city is awash with exciting new projects — aimed at servicing some 305 million tourists who visit annually. For our money, there’s never been a better time — notwithstanding the infamous Golden Week holiday — to bed down in the Paris of the East. Whether you’re searching for designer glamour or the ultimate urban retreat, here are 7 of our favourite Shanghai hotels in 2018 that ought to be on your radar.

Borne from an ambitious restoration project fit to rival the creation of the Forbidden City, Amanyangyun (“Aman Nourishing Cloud”) is the result of a unique collaboration between Aman Hotels & Resorts, Kerry Hill Architects and Jiangxi entrepreneur Ma Dadong. Composed of 13 painstakingly reassembled villas (dated to the Ming and Qing era) this resort is a living testament to the history of ancient China — a cultural heritage that’s disappearing (in the name of progress) throughout the country at an alarming rate. A further 24 courtyard suites round out the grounds, ably modernising Amanyangyun’s enchanting exterior with elegant cabin-esque spaces. The exhaustive array of Chinese, Italian and Japanese dining options alleviate any need to ever leave the hotel; yet all of these pale in comparison to Nanshufang — the inimitable cultural hub at the literal and figurative heart of Amanyangyun. Here, guests are invited to immerse themselves in the classic activities of China’s 17th century literati: encompassing tea making ceremonies; calligraphy; incense burning; and the study of ancient musical instruments like the guqin.

In what must surely be one of the oddest couplings in corporate history, MGM Resorts International and Diaoyutai (a state-owned hotelier best known for its eponymous Beijing guesthouse) have joined hands to open a Shanghai outpost of the world famous Bellagio. A pastiche of Art-Deco and Borghese influences, the new Diaoyutai-MGM property is nothing if not haltingly opulent. Featuring a four-storey atrium, Italian fine dining (courtesy of celebrity chef Julian Serrano) and palatial views of the iconic Lujiazui skyline, Bellagio’s Shanghai outpost faithfully translates the core identity of its Las Vegas predecessor for a modern Chinese audience.

Located on a quiet stretch of North Henan Road (in the fairly centralised district of Huangpu), the sixth property in Bulgari’s burgeoning hotel portfolio is already attracting the global fashion set in a big way. A 48-storey monolith houses various Sino-Italian guest rooms (designed by renowned architectural firm Antonio Citterio Patricia Viel); and is adjoined to the former Chinese Chamber of Commerce via courtyard access. The latter building, completed in 1916, is a red bricked Neoclassical marvel: inside, guests will find the property’s Chinese fine dining venue, triple ceilinged ballroom and dedicated whisky bar. Add to that a subterranean pool and 47th storey F&B outlet, and what you’ve got is a hotel full of fashionably dramatic contrasts.

Most properties operated by Capella emphasise generous square footage, serenity and an unbeatable sense of place. The Singaporean hotelier’s Shanghai outpost (located in the tranquil low-rise district of Xuhui) is no exception. The hotel repurposes a cluster of traditional Shanghainese shikumen: turning them into 55 grandiose villas replete with the best creature comforts that money can buy. Akin to a secluded residential compound, the Capella Shanghai’s public areas feature verdant greenery and a stylised Chinoiserie aesthetic courtesy of Indonesian designer Jaya Ibrahim. Even if you’re not staying in-house, the hotel’s singular dining option, Le Comptoir de Pierre Gagnaire is a destination unto itself — representing the eponymous three-Michelin-starred chef’s first venture in mainland China.

Situated in close proximity to the enclave of galleries and museums which populate the West Bund, Marriott International’s newest EDITION property brings an urbane boutique experience to Shanghai. Though individually tailored service and glossy interior design reigns supreme, the Shanghai EDITION is not short on choice when it comes to F&B programming (this is, after all, a Marriott property). The hotel is home to two rooftop bars, three lounges and a skyward Japanese restaurant; but its most intriguing outlet is poised to be Canton Disco — a retro-infused dancehall serving modern Chinese food from the mind of Ho Lee Fook‘s Jowett Yu.

Hongkongers are certainly no strangers to the House Collective: mega-developer Swire Properties’ portfolio of achingly stylish hotels in and around China. Given the enduring appeal of The Upper House, it’s no surprise that the group’s Shanghai property — smack-dab in the centre of Jing An — was among the most anticipated hotel openings this year. Critical consensus around The Middle House remains overwhelmingly positive. The moment guests enter (greeted in the lobby by a 3,760-piece Venetian chandelier), the hotel sinks its well manicured claws in: from three outstanding F&B venues (including a Shanghai iteration of the ever-popular Café Gray Deluxe) to Piero Lissoni’s effortlessly executed interiors. Without a doubt, The Middle House is a commendable addition to Swire’s curated list of award-winning hotel properties.

When it comes to hotels focusing on lifestyle and wellness, few do it better than The Sukhothai. The Thai hotelier’s Bangkok flagship was joined in April by another property in Shanghai — a temple of grey and cream interiors where guests’ health and environmental concerns are assuaged in lavish style. Thanks to its wildly popular Southeast Asian spa programme and wellness-focused amenities (e.g. an in-room diatom-silica air purifier), The Sukhothai is likely to achieve positioning amongst Shanghai’s top “urban oasis” hotels.

Head to Tamil Nadu, India and don’t miss out on these glamping experiences