Home > Travel > Hotels & Resorts > Check in to these luxury hotels in Kolkata, the Indian city of arts 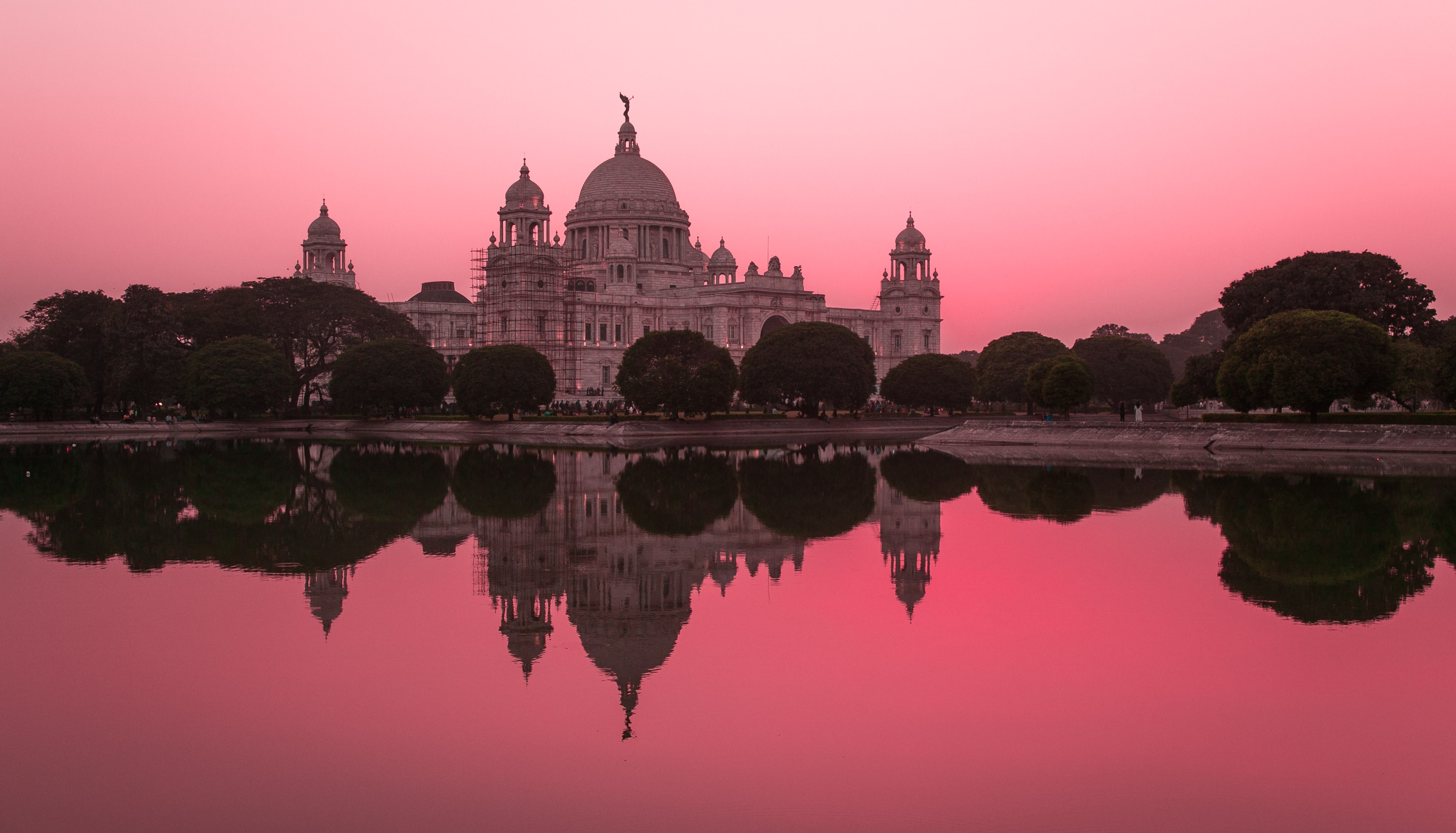 Check in to these luxury hotels in Kolkata, the Indian city of arts

Travel
Check in to these luxury hotels in Kolkata, the Indian city of arts
Share this article
Next article

It’s known as the city of joy, but Kolkata has always been a pioneer for the arts, theatre, and literature in India. If you’re an appreciator of the fine arts, then this eastern Indian city is the place for you to visit. Naturally, you’ll need to check in to one of these luxury hotels in Kolkata to complete the experience.

Other than checking out the art scene, Kolkata is also home to some of the best wildlife experiences in India. There’s Sundarbans, the largest river delta and estuarine mangrove in the world. Tourists will need permission to enter the estuarine delta area, but you’ll be able to spot the iconic Bengal tigers.

Also worth checking out while you’re in Kolkata is the Victoria Memorial Palace, an exquisite marble building set in the Indo-Saracenic Revival Architectural Style. It’s now a museum dedicated to preserving the story behind its construction.

Naturally, you can’t miss out on checking out the art and cultural heritage that Kolkata is so known for. Visit Kumortuli, the city’s pottery district, where all the clay idols of Hindu gods and goddesses are made. There are workshops that you can participate in and shops for you to purchase the clay idols too.

After all that fanfare, it’s time to take a much-needed rest in one of these hotels in Kolkata. Only the best will do, so check out the list of luxury hotels below. 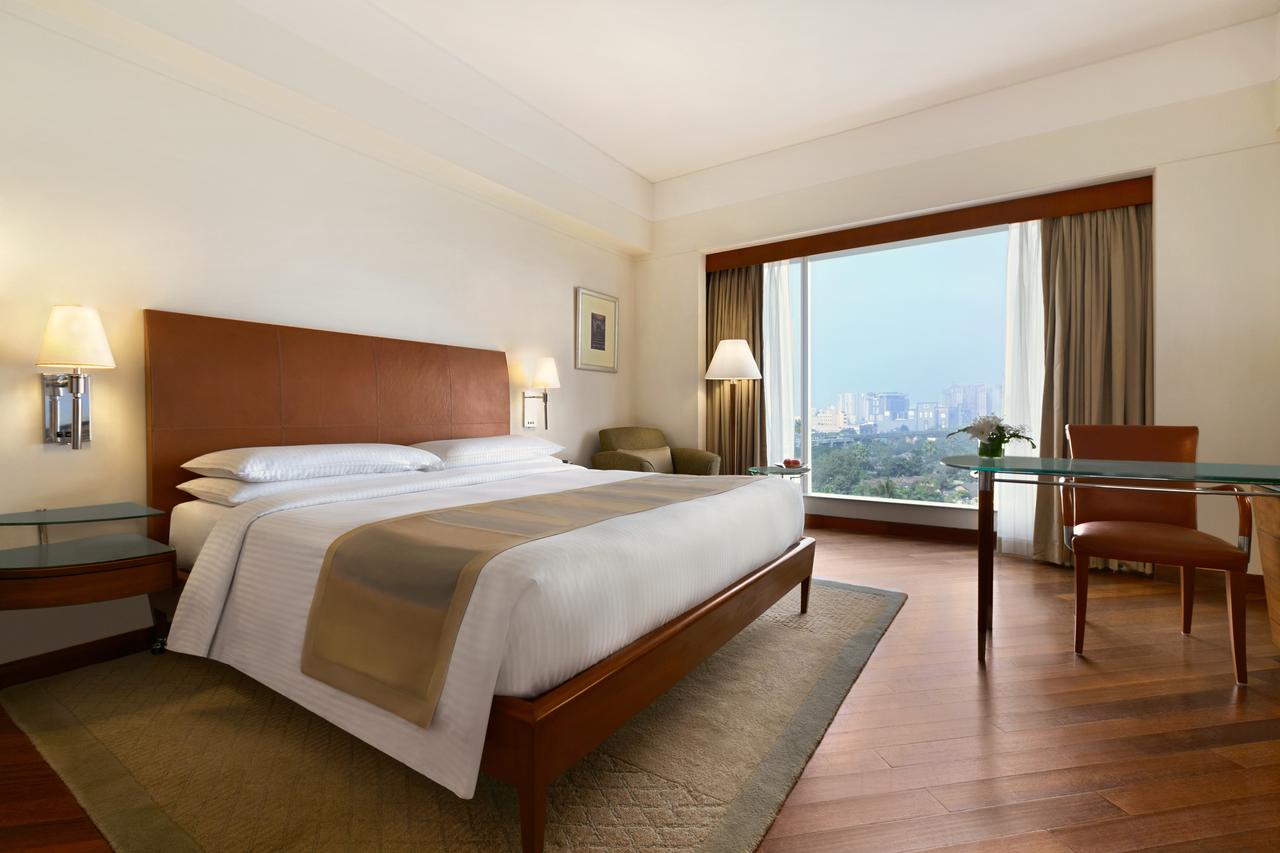 The Hyatt Regency Kolkata is located in the business district of Salt Lake City (not to be mistaken with a certain city in the US), making it more of a business hotel. However, the amenities there will make any leisure traveller comfortable too. The rooms have a modern design with wood-panelled flooring, compared to the palace hotels you find in Jaipur. Other amenities include an outdoor swimming pool and spa, while the six restaurants and bars within the hotel will keep you covered during your time there.

The ITC Sonar is a gorgeous property – a contemporary boxy building rises amongst a pond of water lilies. It’s one of the more modern buildings in a city steeped in history. The hotel calls itself a business resort, merging the efficiency of a business hotel with the relaxation of a leisure one. There are 237 guest rooms and seven suites to pick from, each dressed in rich hues of mahogany wood. Five dining outlets complete the gastronomic experience of guests, bringing you from the North West to refined royal Indian cuisine. When it comes to luxury, it’s hard to top the JW Marriott Hotel Kolkata. The hotel is sumptuous in its design, from the shiny doors in the lobby to the classically elegant rooms. If you’re feeling fancy, be sure to book yourself an Executive Suite to get a view of the Kolkata cityscapes. Luxurious marble bathrooms complete the experience, while plush featherbeds ensure you’ll have a good night’s rest after exploring the city. Dine in one of the four restaurants in the hotel, which include Vintage Asia showcasing Thai, Chinese, and Indian cuisine, or party the night away in Gold, one of the city’s best clubs. 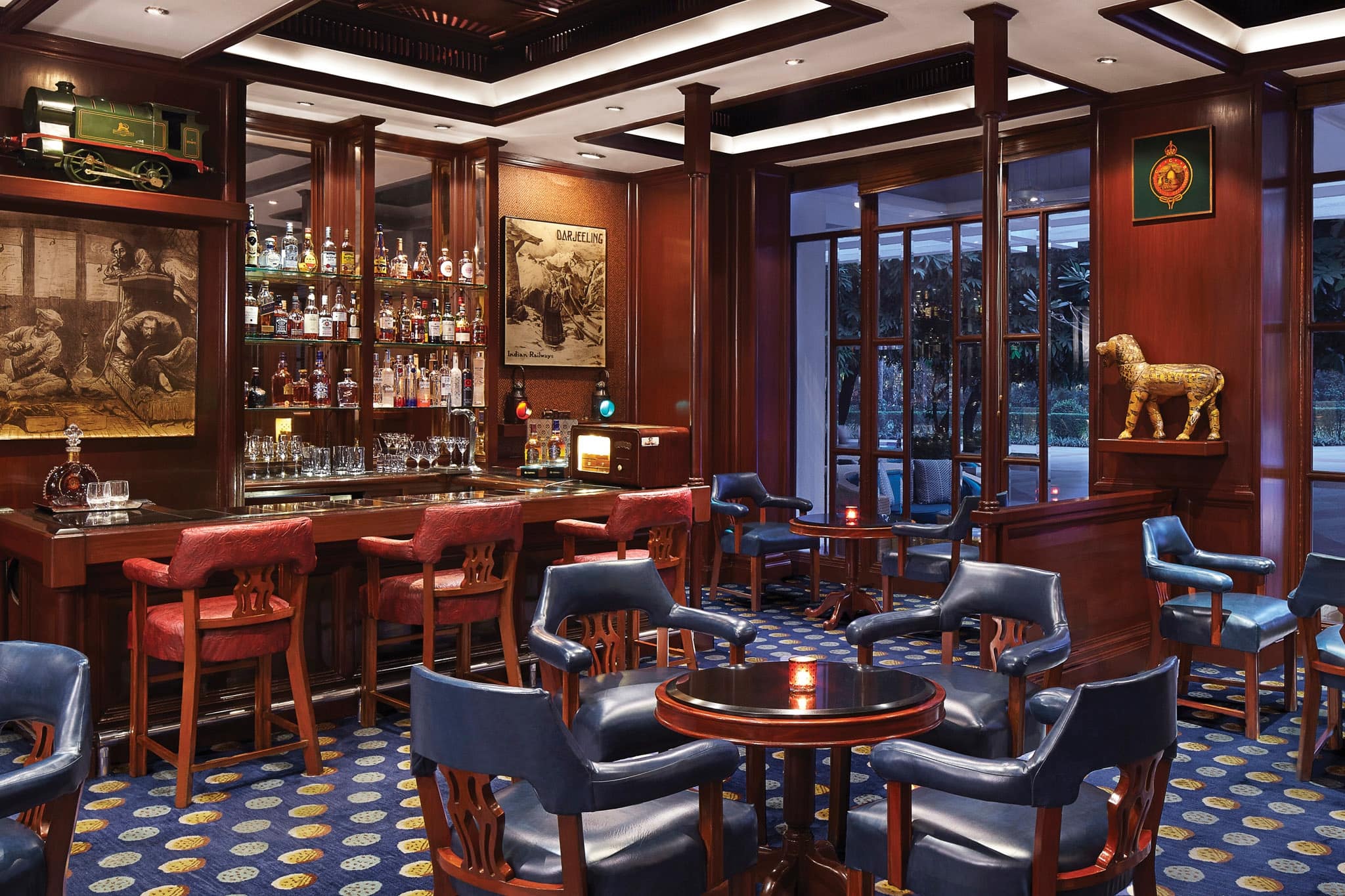 Built in 1989, the Taj Bengal Kolkata certainly has its history. It still retains its regal glamour, filled with contemporary and local art with an imposing atrium lobby. The architect behind the building is none other than Bob Fox, who took influences from the art, culture, and heritage of the city. But that doesn’t mean the hotel is old fashioned — the 229 rooms and 11 suites are fitted with modern amenities. The selection of fine dining restaurants in the hotel is also sure to please even the most discerning of palates. There’s Sonargaon serving influences of British Raj, Islamic, and Punjabi-inspired dishes; Souk, which serves Mediterranean and Middle-Eastern dishes; Chinoiserie for Chinese fine dining; The Hub for brunch; The Junction, a railway-themed bar; and more all-day dining options. 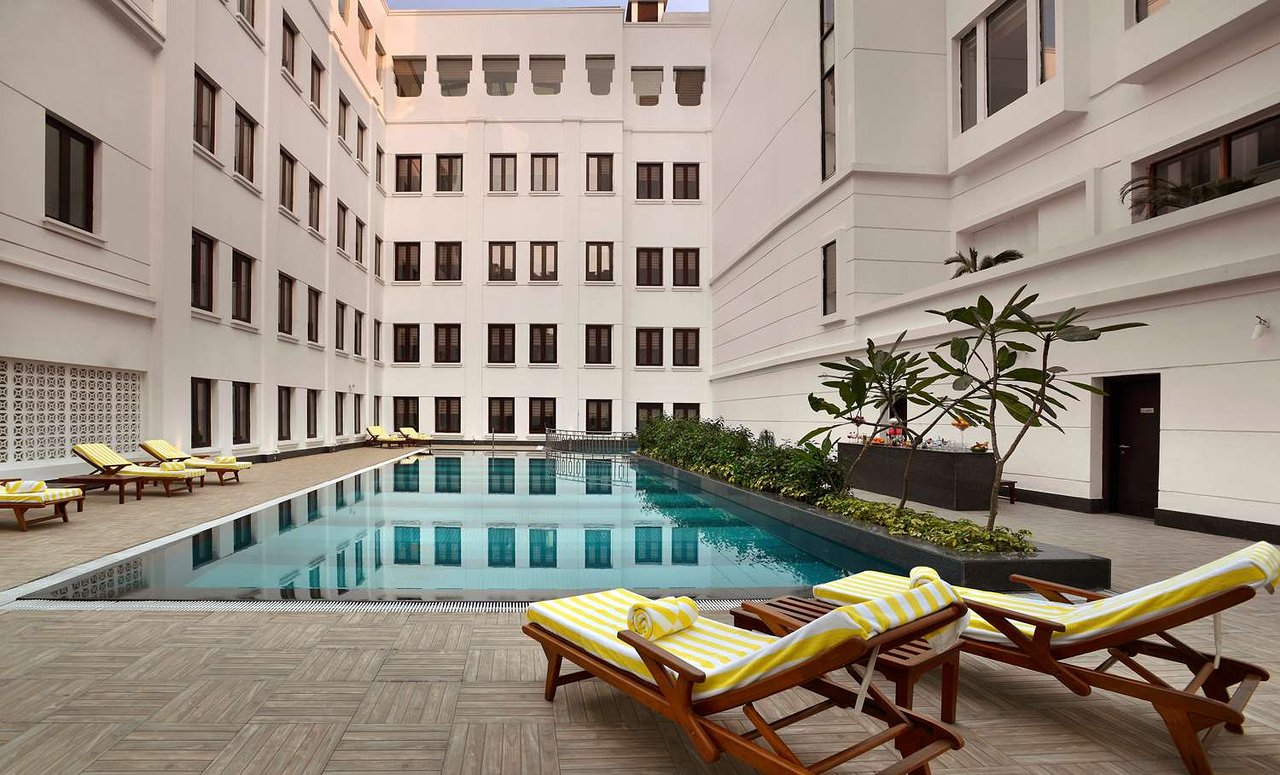 Should you be the kind who enjoys being close to the old quarters of a historical city, then The LaLit Great Eastern Kolkata will be your ideal hotel as it’s situated within walking distance of the colonial-era buildings in the city and main attractions. Despite having been refurbished, the building still retains some of its original features dating back to over 160 years ago. Rooms are large with modern amenities, but certain old touches remain, including the traditional wooden Karkhari window shutters. Dine at Alfresco, the in-house restaurant that specialises in Bengali and local cuisine. 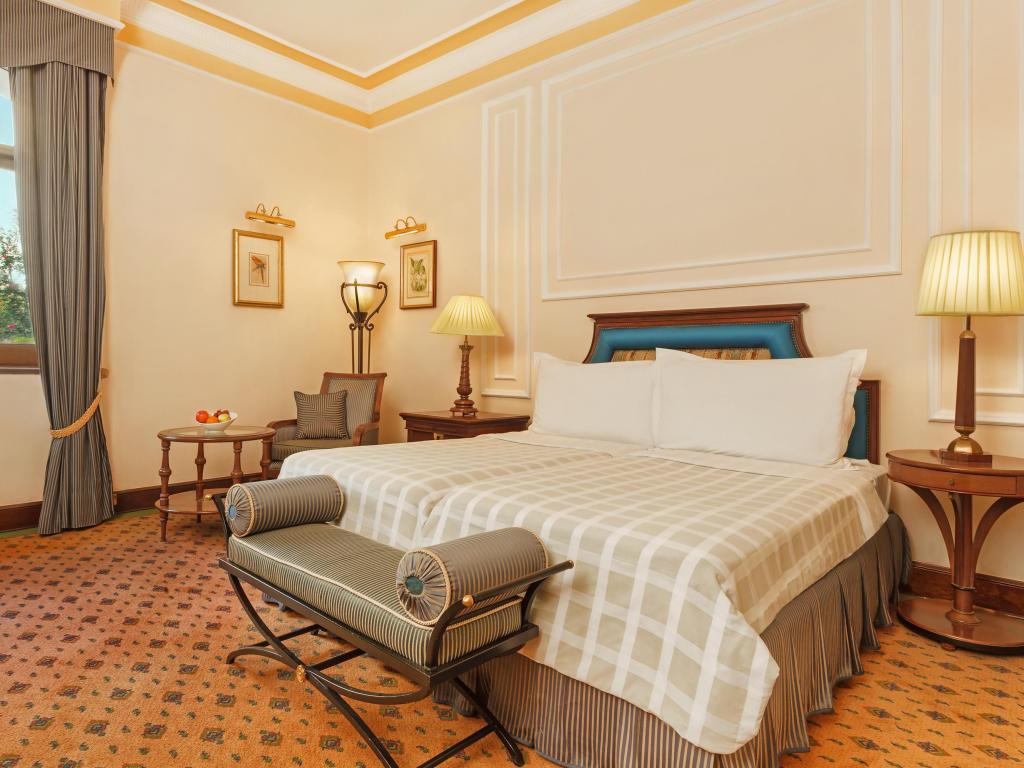 You can’t mention luxury hotels in Kolkata without including The Oberoi Grand, perhaps the most palatial and historical of them all. Opened in 1888, this large 19th-century building takes on a colonial-style reminiscent of its time. Rooms are quietly elegant, but it’s the dining outlets that really take the spotlight here. The Thai restaurant Baan Thai is exquisite, while La Terraces dishes up Bengali and Indian dishes. Have drinks at the Chowringhee Bar, which boasts a large selection of spirits and wine.

see more
Kolkata luxury hotels india hotels in kolkata
PohNee Chin
Editor, Kuala Lumpur
Poh Nee is the editor and writes about travel and drinks. When she's not living out her holiday dreams via Google Earth and sipping on an Old Fashioned down at the local bars, you can find her snug at home bingeing on Netflix and mystery fiction.
Travel Drinks