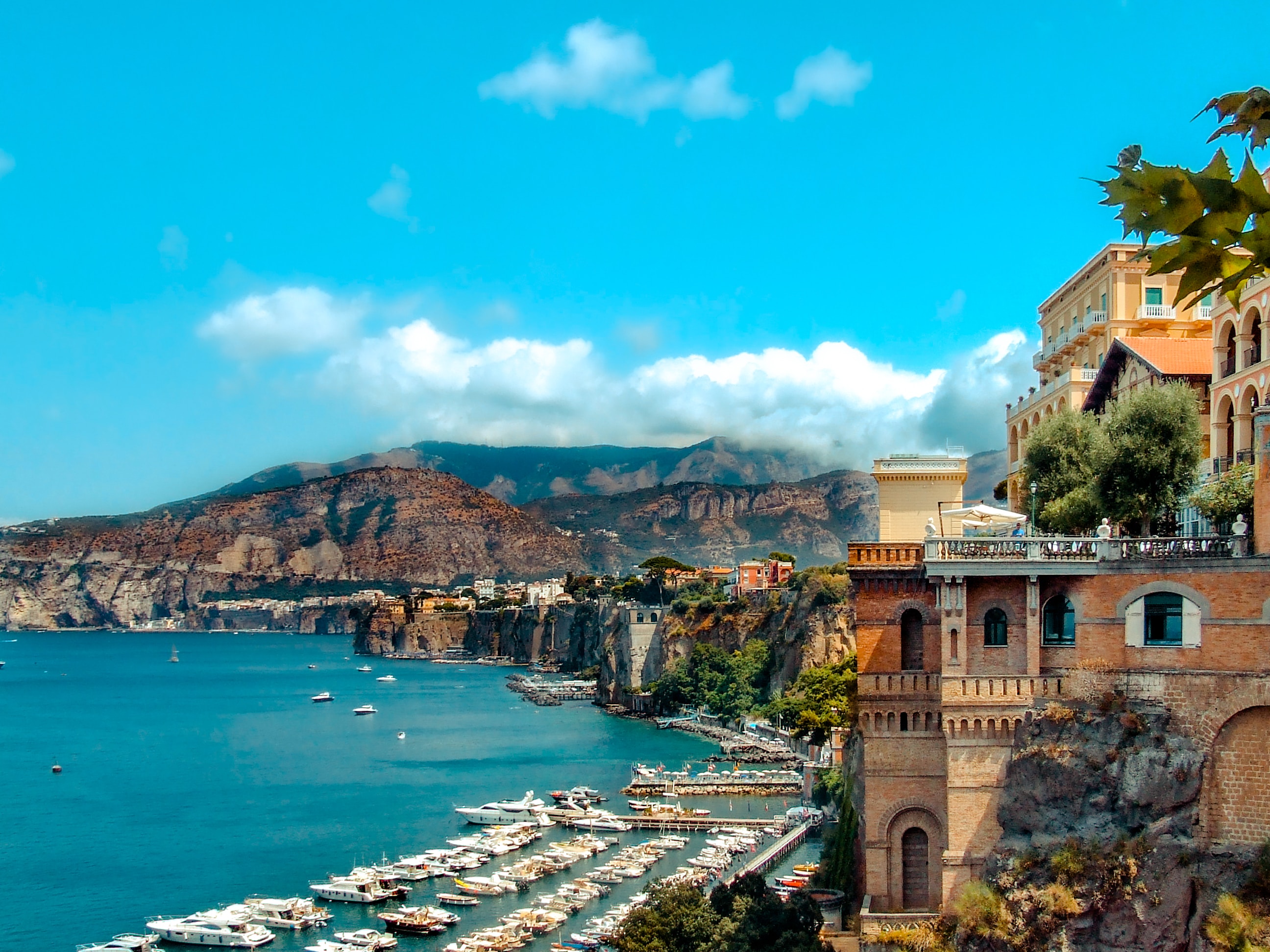 Like a scene out of a James Bond movie, the isle of Capri is a magical one. It’s a place that’s seemingly frozen in time with perpetual sunny days, blue seas, and worlds away from reality. It’s best you check into one of the many luxury hotels in Capri before you continue languishing on this dream.

Of course, like many coastal Italian cities, Capri is where the rich and famous come for a vacation. With luxury yachts moored at the port ready to take you out to sea on a feast of champagne and oysters, as well as high fashion boutiques lining the main town area, this surely is a place for the affluent to splash out on.

Still, the wondrous nature of Capri is a sight to behold – just see the Blue Grotto and its luminous azure waters, the towering Faraglioni rock formations and rugged sceneries. If you’ve yet to visit, you definitely need to keep this on your bucket list.

Allow us to help you out on that with a list of the finest luxury hotels in Capri that you can check in to. 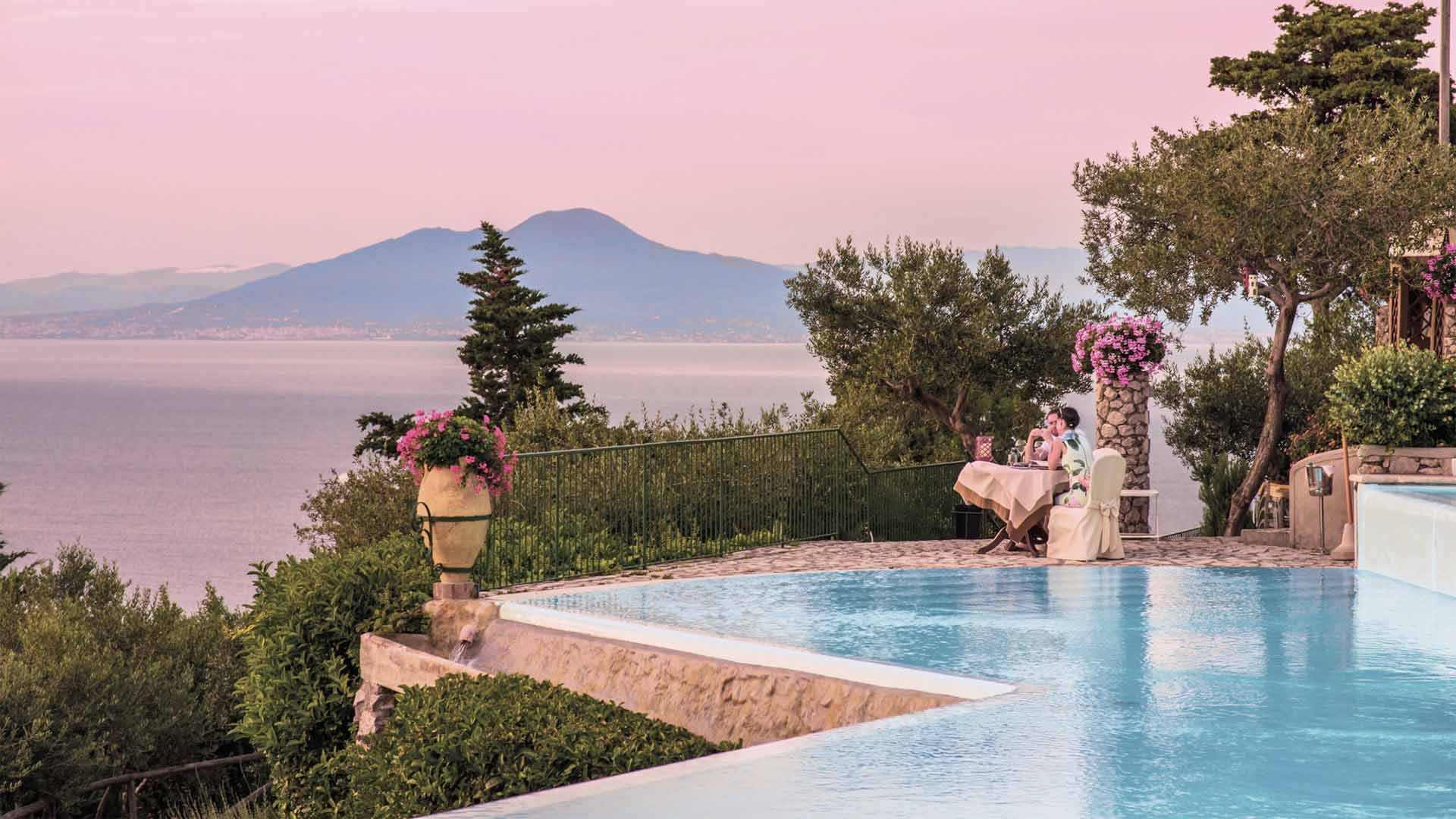 Like many European hotels, the Caesar Augustus is steeped in history. It was first built in 1850 as a private villa, and later became an inn for the workers constructing the Capri-Anacapri road two decades later. Then, it became a refuge for a Russian exile who filled the place with much art and culture. Sometime during World War 2, it was sold to the first generation of the current family that continues running the hotel, now transformed into a luxury five-star resort. The rooms may have vintage touches, but its amenities are state-of-the-art. Within the property is also a spa and infinity swimming pool, which are perfect to admire the gorgeous spectacle that is the Bay of Naples as well as the Amalfi Coast. The in-house restaurant practices locavorism, with much of the produce coming from the kitchen garden itself. 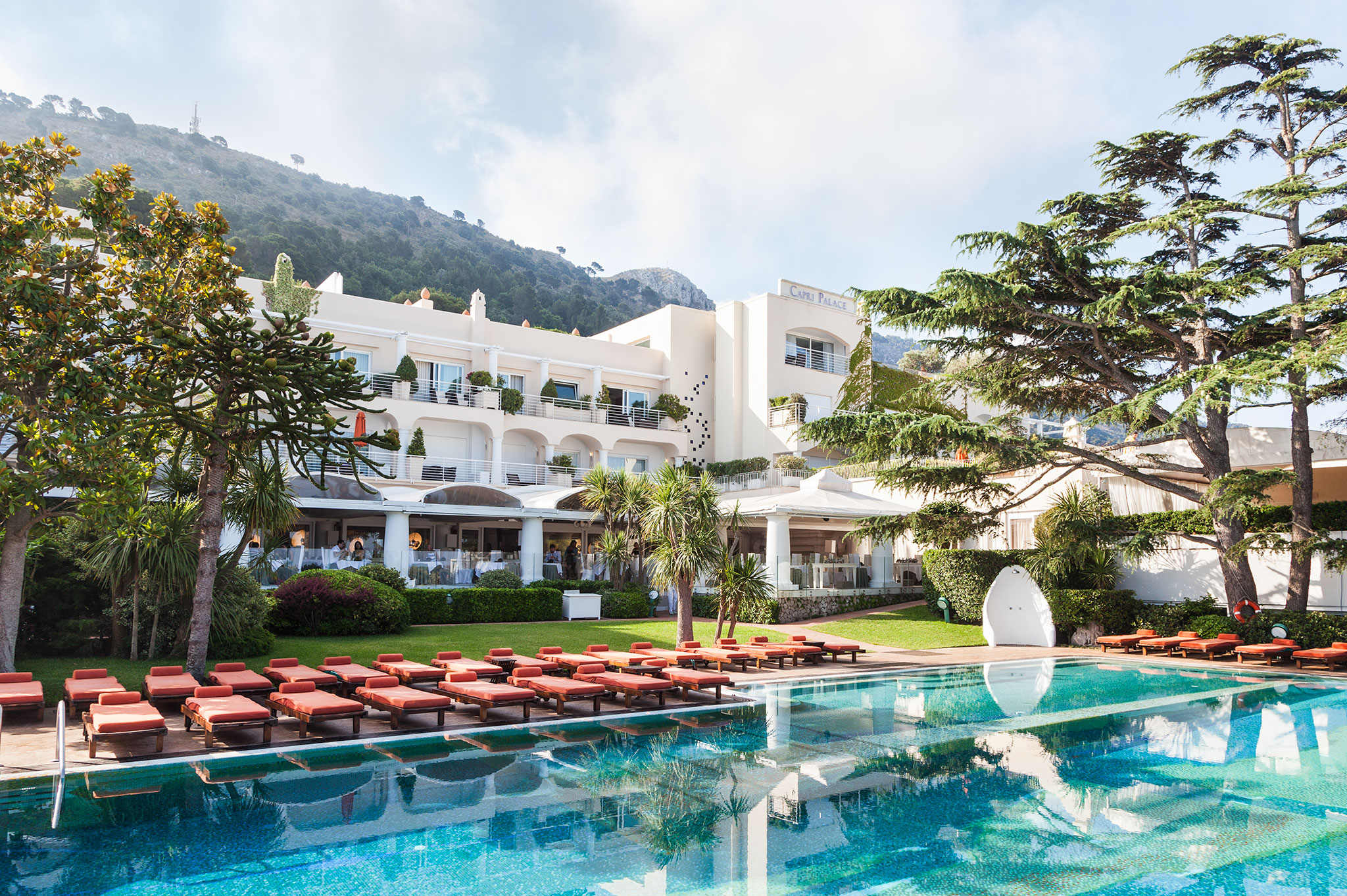 Capri is known for its glitz and glamour, but if you’d like to get away from it, the Capri Palace is the best place to stay on the island. You can take a chairlift from right outside the hotel to head up to Mount Solaro, and the hotel is also a short drive away from the Blue Grotto, a sea cave with bright blue illuminated waters thanks to sunlight passing through an underwater cavity. The hotel itself is chic and elegant, decked in mostly shades of white and cream – reminiscent of a Neapolitan palazzo. Be sure to book yourself a session at the award-winning Capri Beauty Farm, which boasts a team of 25 doctors, dietitians, beauticians, chefs, and therapists. The Michelin-starred Il Riccio beach club and two Michelin-starred L’Olivo is also worth several visits for fresh seafood and creative takes on local dishes respectively. 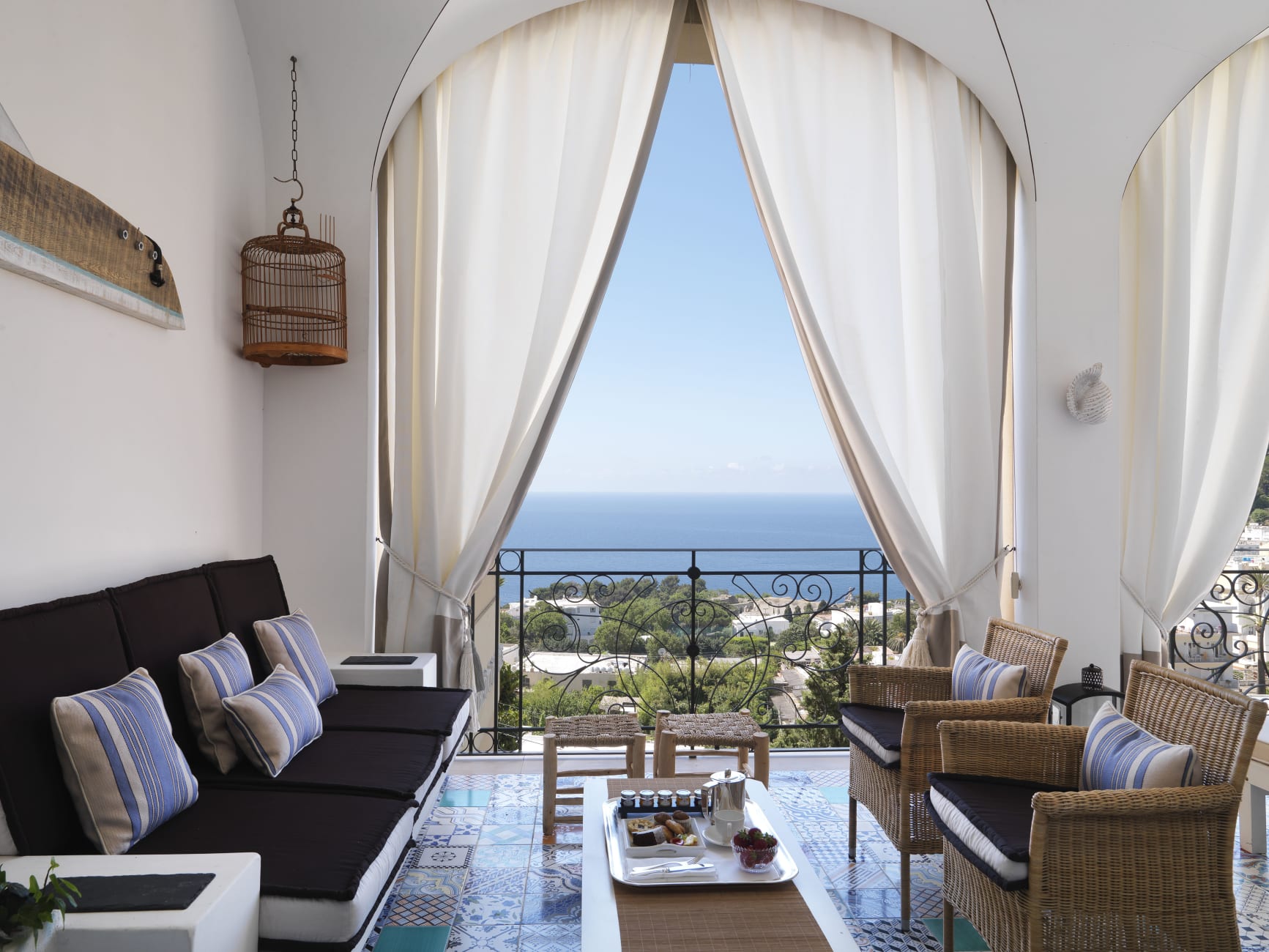 From a 19th-century palazzo, the Capri Tiberio Palace has since been transformed into a luxurious boutique hotel with funky and quirky interiors – think pop art pieces, colourful furniture, and a collection of memorabilia from around the world. This is the place for those who want to visit Capri and be in the most happening area – but you’re still able to manage a semblance of peace because the hotel is tucked within the shops that are slightly out of the crowded area. One thing’s for sure, the rooms are cool thanks to the little decor touches, but still cosy enough to feel like you can relax. As for dining options, it’s worth noting that there are Kosher and halal options, making the hotel a good consideration if you’re of a particular faith.

Despite being in an age of sustainability, old European towns and eco-friendly hotels rarely go hand in hand. The Excelsior Parco is one exception, being an eco-friendly boutique hotel with even an electric car to ferry guests between the hotel and the port, which is five minutes away. The interior is decked in an Art Nouveau style and only has 11 rooms on the property. The eco-friendly part comes in to play with energy-efficient cooling and heating systems as well as organic toiletries. Dining in the hotel focuses on organic produce as well as a selection of vegan and vegetarian dishes. 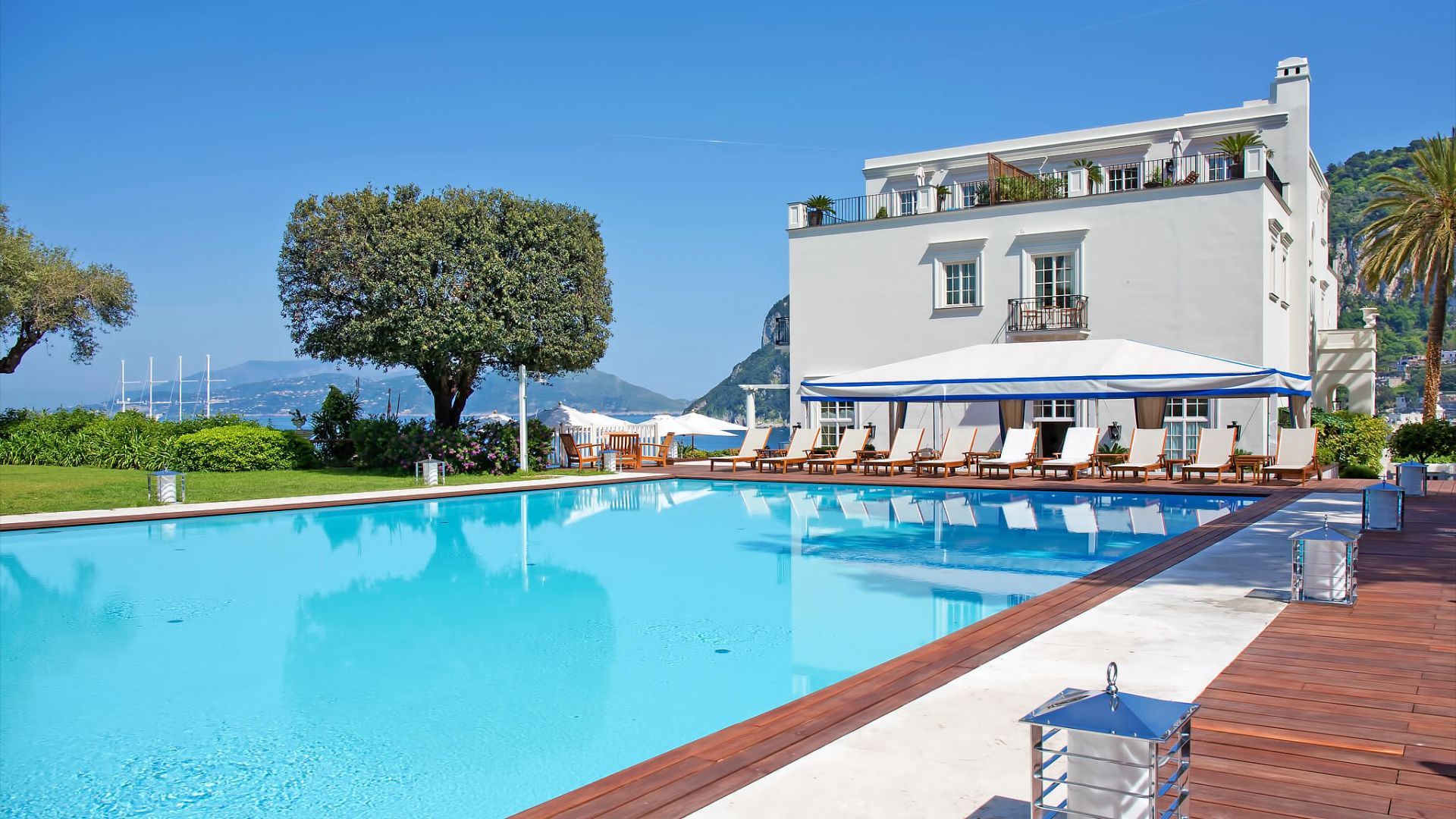 On the sprawling grounds of this hotel, one of its most eye-catching features has to be the large swimming pool lined with lanterns by Estro. The hotel has traditional architecture with heritage pieces in its furnishings, and the 22 individually-styled rooms are tastefully done up. Most of the rooms boast sea views. There is only one restaurant within the property – JKitchen – but it’s all you’ll ever need. In fact, it has made a name for itself as one of the best restaurants in Capri, serving up haute cuisine inspired by the chef’s Neapolitan grandmother. 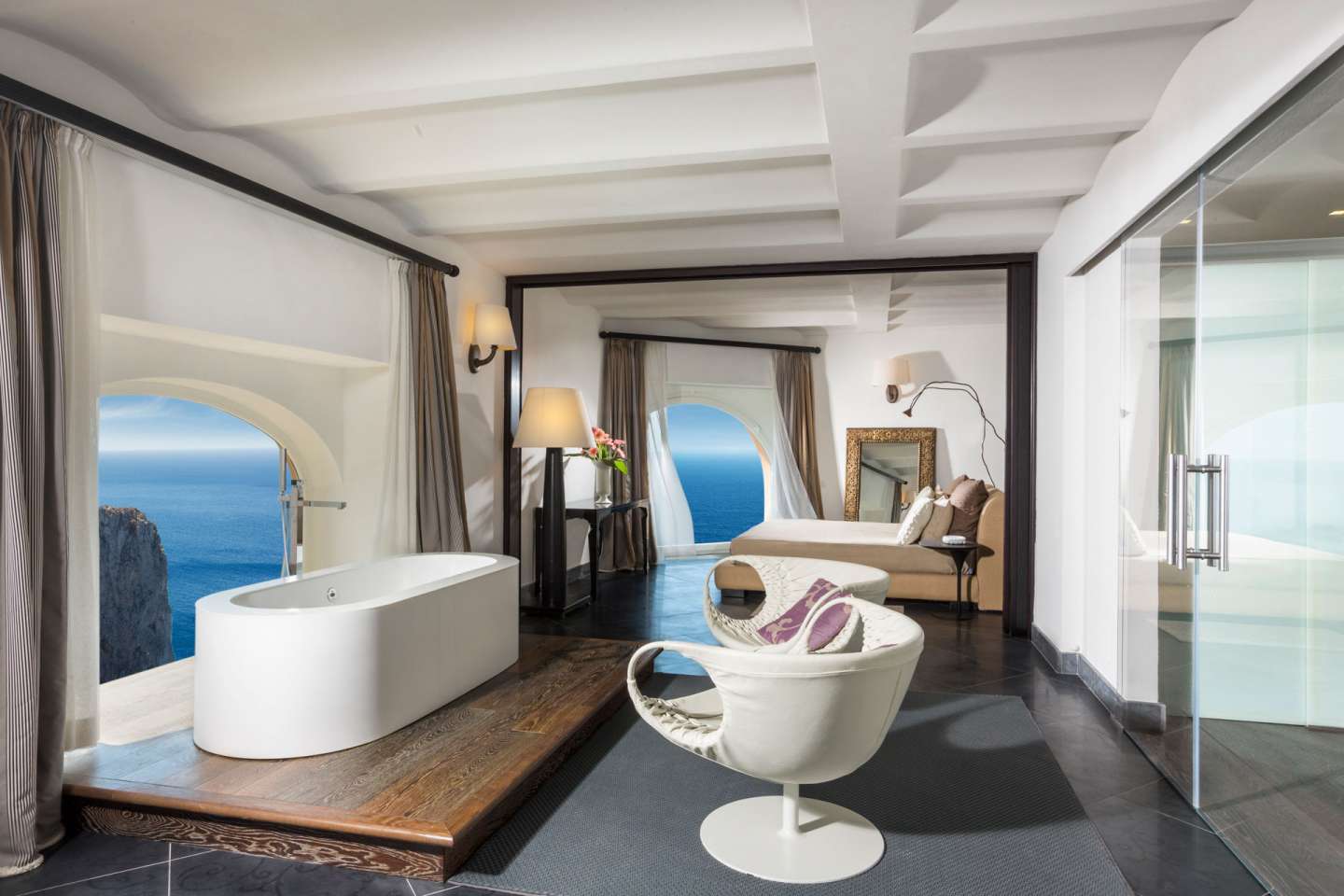 For the best location with the most amazing view of the Faraglioni cliffs, you have to check in to the Punta Tragara. The hotel was first a villa designed in 1920 for a Lombardy engineer and later became an American military base, hosting known figures such as Winston Churchill and Dwight D. Eisenhower. Now a luxurious hotel, the rose-pink building hosts 38 rooms and six suites, all of which have differing interiors ranging from classic to contemporary. All rooms come with its own terrace or balcony and are equipped with five-star amenities. On the hotel grounds is the Le Monzù restaurant serving inventive and fresh dishes with Capri influences, while the hotel’s other restaurant located in town is the Michelin-starred Mammà, which will make for a memorable meal.

see more
hotels in italy Capri hotels in capri
PohNee Chin
Editor, Kuala Lumpur
Poh Nee is the editor and writes about travel and drinks. When she's not living out her holiday dreams via Google Earth and sipping on an Old Fashioned down at the local bars, you can find her snug at home bingeing on Netflix and mystery fiction.
Travel Drinks

Luxury hotels in KL are offering their own WFH packages