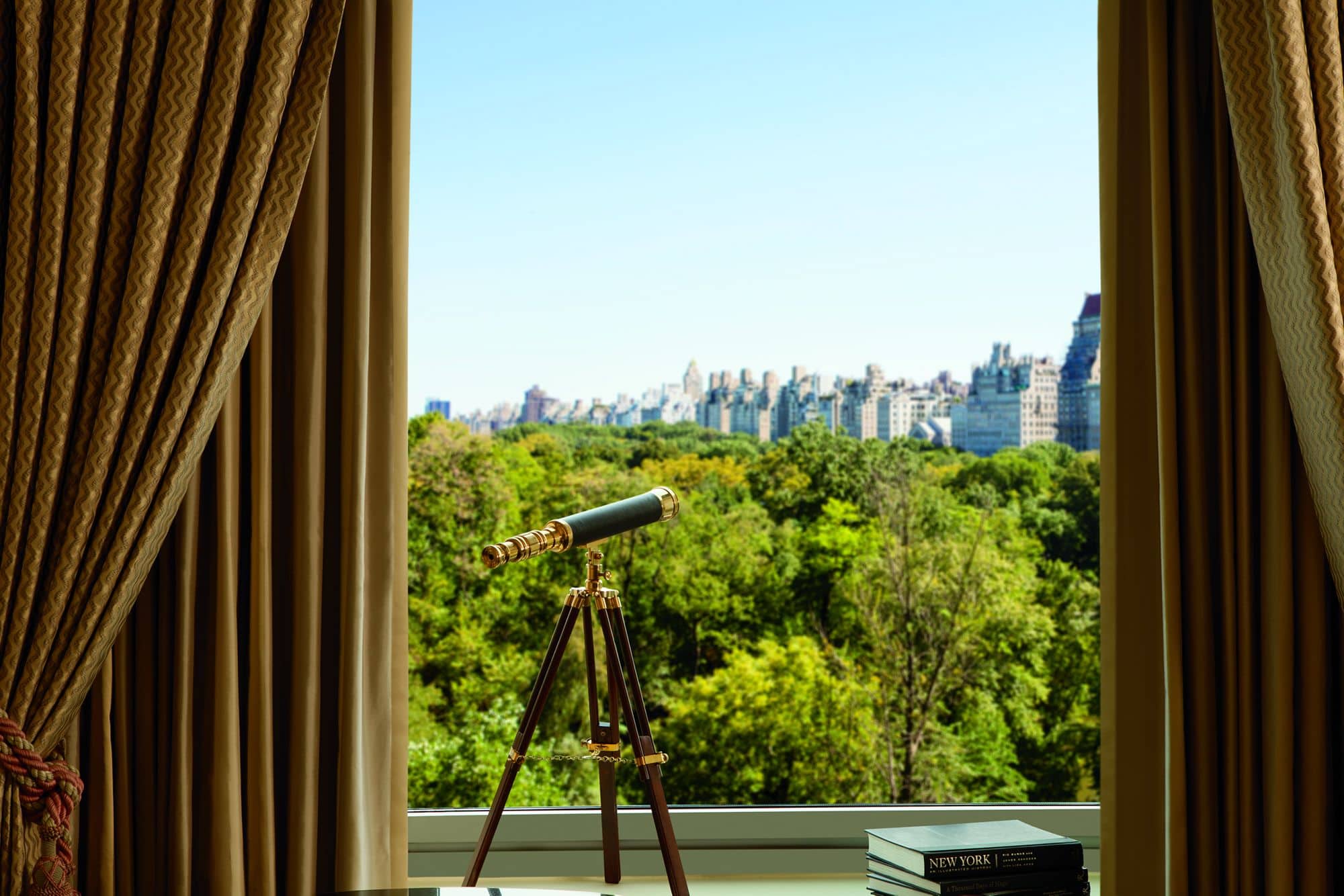 The most exquisite luxury hotels in New York to stay in

New York — a concrete jungle where dreams are made of. There are a million things to do in this city that never sleeps, ranging from interests to price points. But one thing that you shouldn’t compromise on is rest. While you’re at it, why not make it one of the most prestigious luxury hotels in New York? The Big Apple has no shortage of hotels, which means that it’ll be even more difficult to pick the right one.

The key to nailing your stay in New York is cherry-picking only the best of the lot. Forget chic boutique hotels and quaint Airbnb homes — go for the most upscale and prestigious ones that will either bring you back to the glory days of old Hollywood or to the gritty yet fashionable meatpacking district that is synonymous with New York.

So sink into your plush bed, put on a face mask, and order room service of champagne, burgers, and fries. Turn on the TV to the American Movie Classics (AMC) channel — How To Steal A Million, perhaps? — and simply enjoy your stay in one of these luxury hotels in New York. The gorgeous courtyard is perhaps one of the iconic features of this lavish hotel. Inside, the hotel is just as beautiful. The lobby itself boasts a cosy and timeless style of Moroccan tiles, leather armchairs, polished oak floors, and Italian marble. The hotel owned by Robert De Niro is in the middle of Tribeca and close to the Hudson River. There are 88 rooms and suites in The Greenwich Hotel, not a single one is exactly the same. Some take on a European interior style, while others have a more Scandinavian approach. It may not be as old as The Plaza, but The High Line Hotel gets brownie points for being industrially chic and just outside the entrance of the High Line Park. The beautiful red brick building is nestled in trendy West Chelsea, within close proximity to the chicest fashion boutiques and art galleries in town. The interior takes on a European vibe with plenty of vintage bits and bobs from the rugs to the furniture — all curated by design firm Roman and Williams. The High Line Hotel also has an Intelligentsia coffee bar, which will please the third wave coffee drinkers. 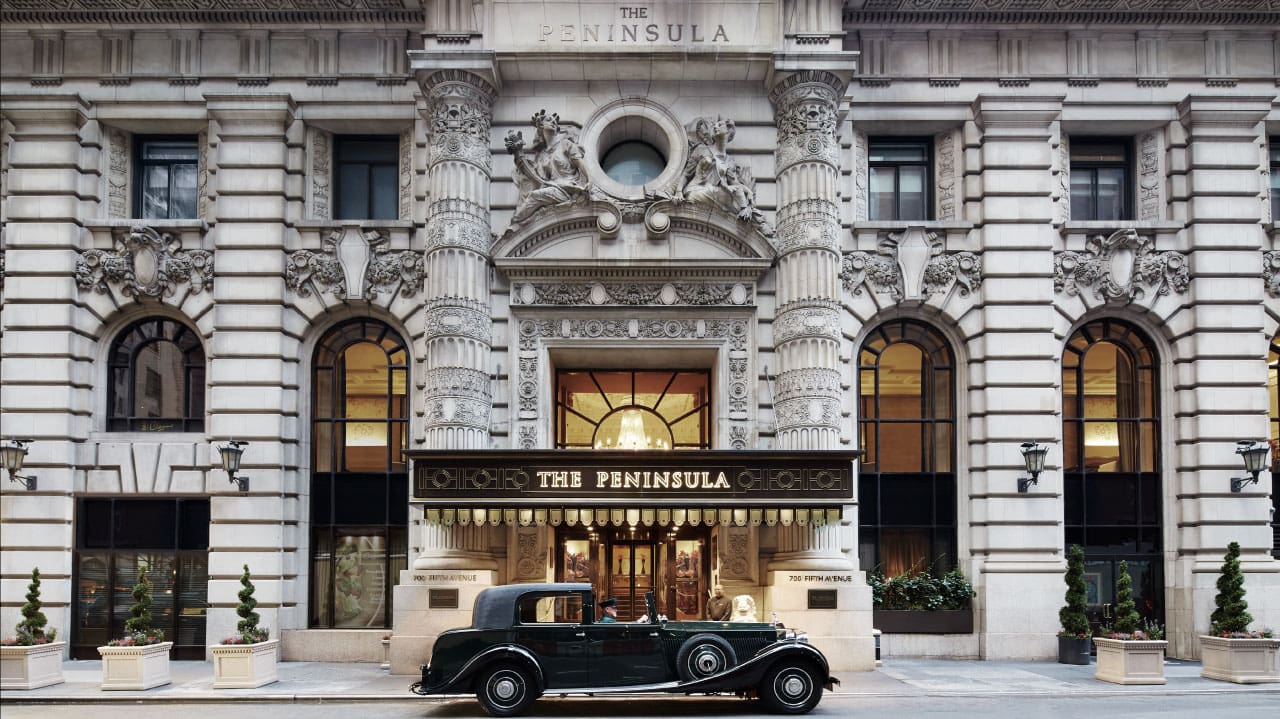 One of the hotels you should go to for a taste of old Hollywood is The Peninsula New York. Upon stepping into the lobby, its grandeur sweeps you away instantly — the grand staircase is almost perpetually decked in fresh flowers, the plaster ceiling is ornate, and the crystal chandelier close to blinding. It truly is a sight to behold. 235 large rooms fill the hotel in classic neutral tones and Oscar de la Renta bath products. Don’t miss out on cocktails in the Gotham Lounge or the rooftop bar Salon de Ning — one of the city’s most stylish places to get a drink. 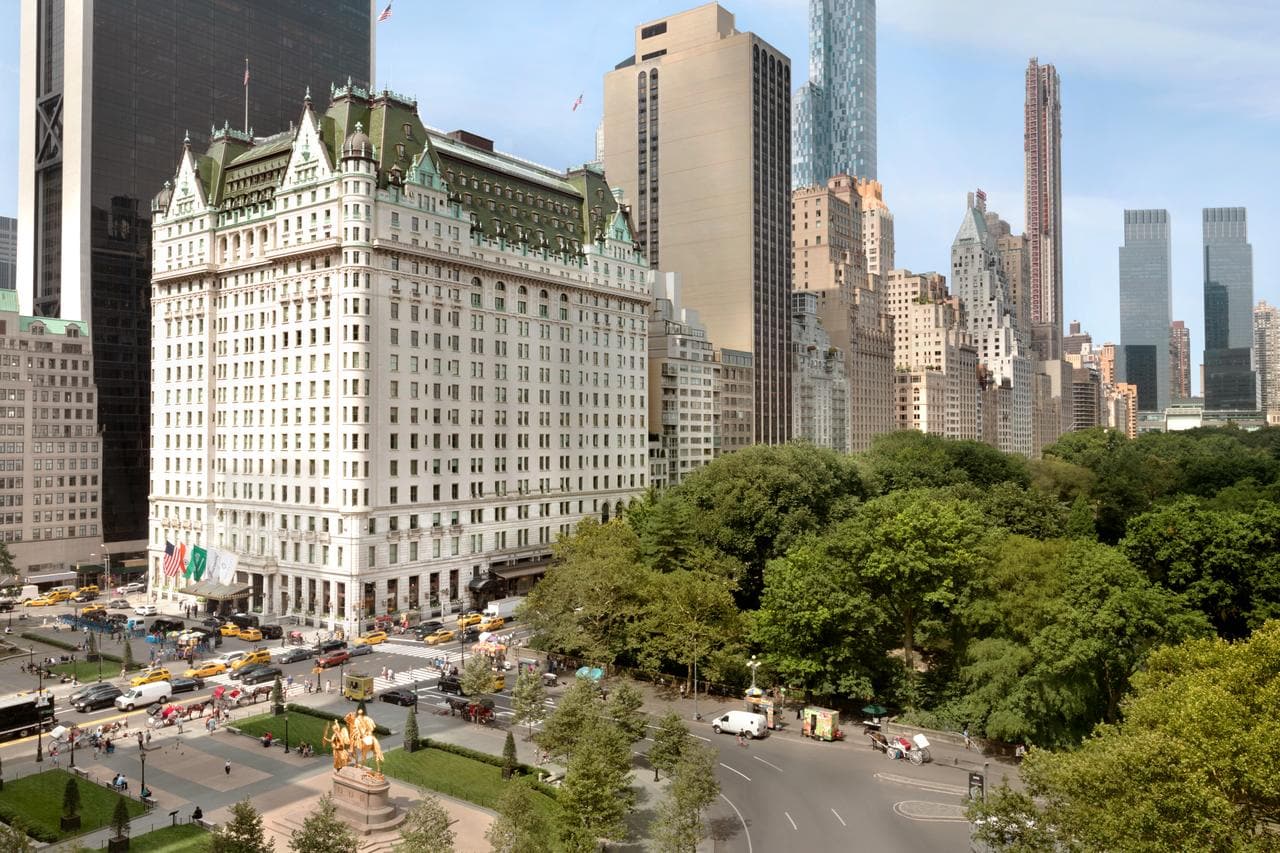 No other hotel is as synonymous to New York as The Plaza. A grand feature in many Hollywood movies, the Beaux-Arts building is sure to take your breath away the first time you lay eyes on it. Even its location on the corner of Fifth Avenue and Central Park South is on prime real estate. The hotel is the perfect example of old-world luxury, as one will be able to tell from just the lobby — marble, gilded sculptures, crystal chandeliers, and fresh flowers. The rooms are elegant and lavish — larger than most New York hotel rooms, high ceilings, tall windows, and luxurious bedding. While most suites come with bespoke furniture and art pieces, you can also opt for the more contemporary Eloise Suite, designed by Betsey Johnson that comes with pink prints and bold black accents. It doesn’t get more authentic than a luxury hotel that overlooks the famed Central Park in New York. The Ritz-Carlton New York Central Park is also home to the country’s first La Prairie spa. If their Caviar treatments are anything to go by, it’ll probably be one of the more luxe spa treatments you’ll ever experience. The 19th-century building was formerly the St. Moritz Hotel before Ritz-Carlton took over in 2002. Inside, the hotel boasts dark wood, polished brass, and heavy brocade drapes that mute the sound of the busy outdoors. The hotel comprises 259 rooms and suites in soft brown and pink accents. If you do happen to check into them, note the in-room fragrance, Central Park, exclusively created by L’arganique Beauté. 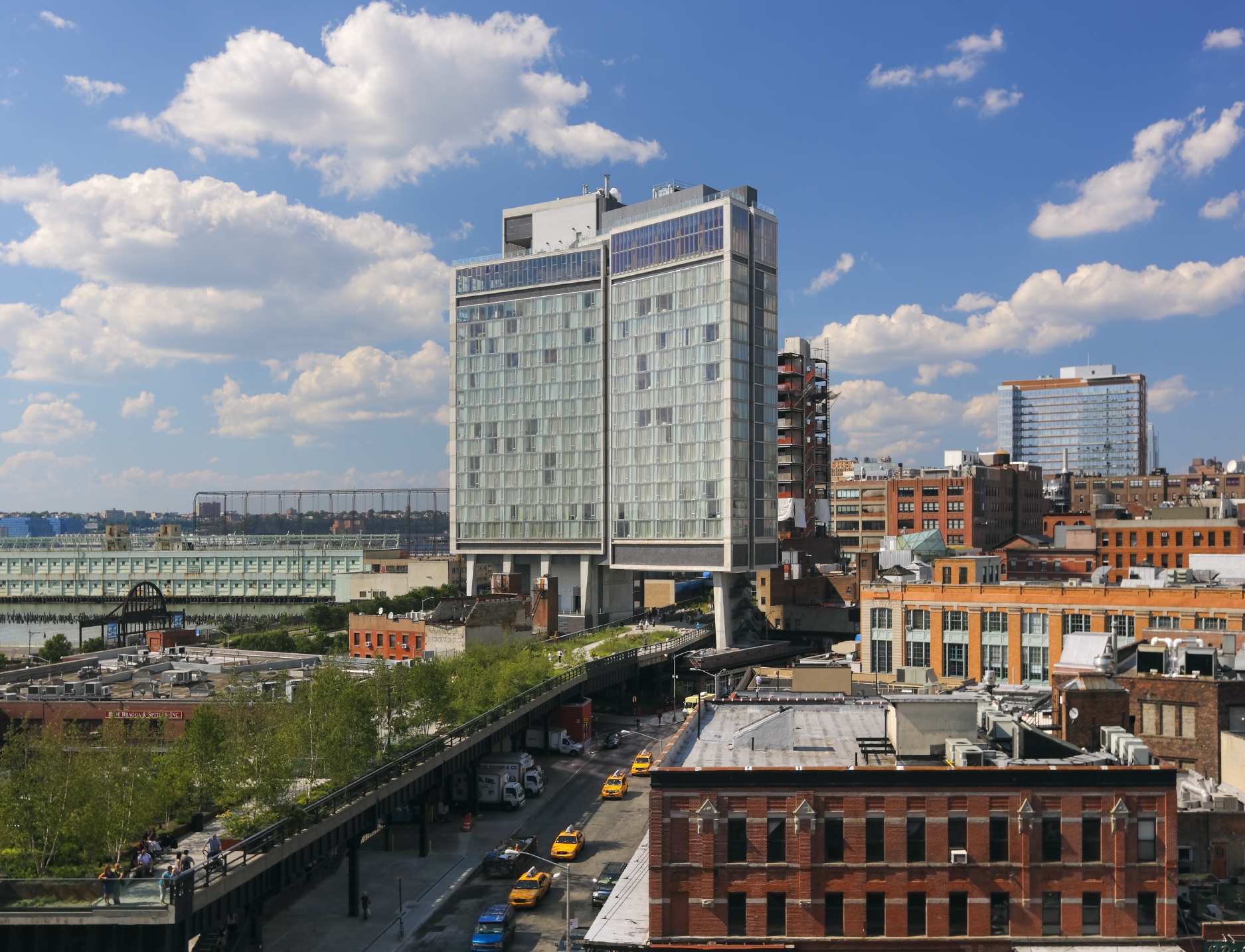 If old-world luxury is not your cup of tea, then perhaps something more modern like The Standard High Line will be up your alley. Nestled in the trendy meatpacking district and overlooking the Hudson River, the gleaming building is said to take on an “LA flash meets New York glamour” vibe. Floor-to-ceiling windows take up most of the rooms, including the upper floor gym that’s completely encased in glass. It’s also home to a swanky penthouse club and a bar with some of the best views in town. 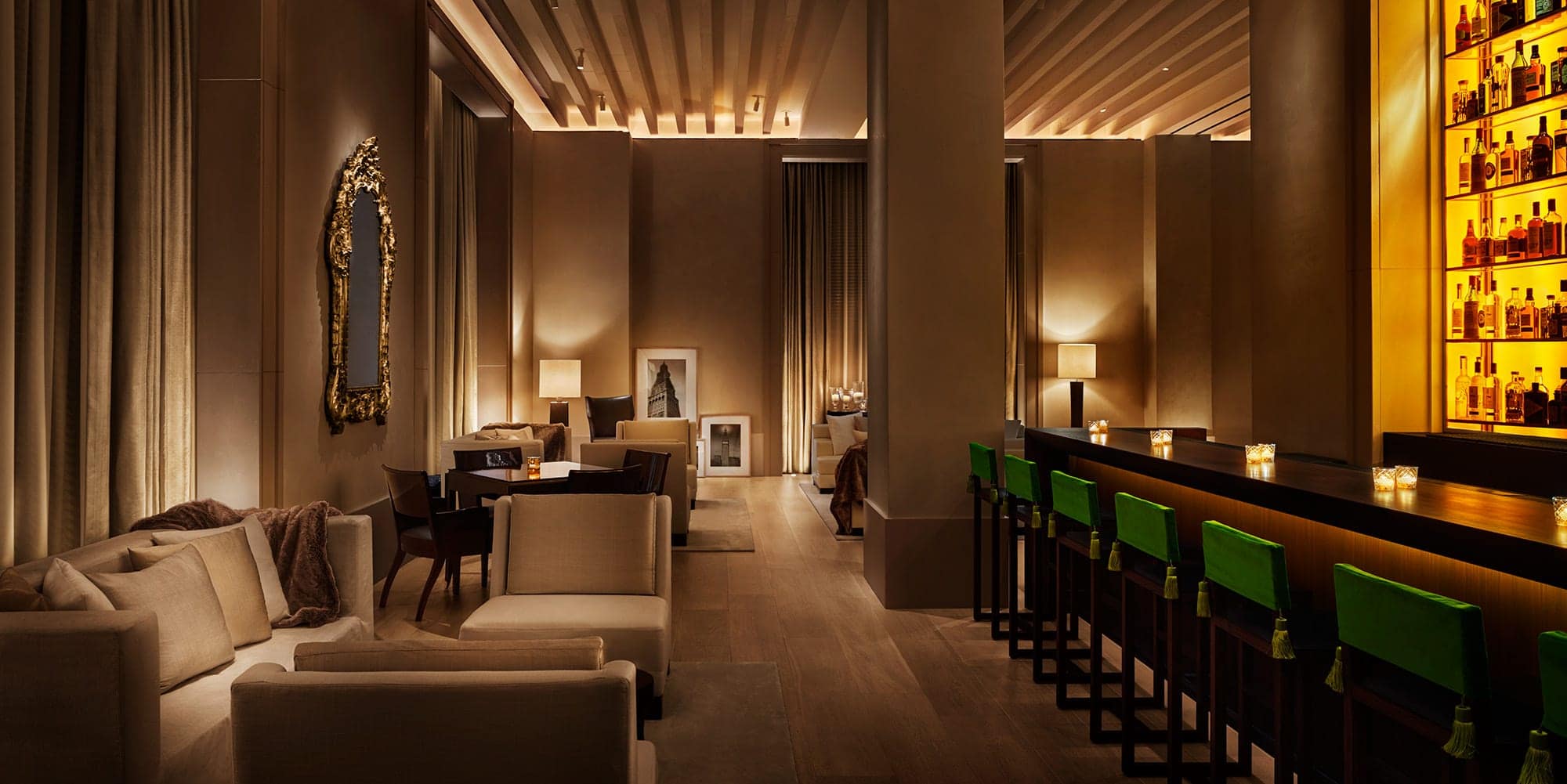 There are many interesting buildings in the world repurposed into hotels — one of them is The New York Edition, housed in a former clock tower. It’s elegant, modern, and sophisticated with plenty of glass and steel. The room design takes on a minimalistic and clean approach with light wooden flooring, beige walls, and white furniture. The hotel is also home to a restaurant helmed by Michelin-starred Chef Jason Atherton. He also curates the Lobby Bar’s light menu.