With a decidedly cosmopolitan outlook, and some of the best urban infrastructure on the planet, Singapore has long been hallowed ground for big business and all of its attendant spectacle. The World Gourmet Summit, F1 Night Race, an EDM festival that’s literally held at sea — when it comes to big thrills, everybody knows the Lion City can tango with the best of them. Despite all that, in the pantheon of short-haul holidays, Singapore remains an undervalued destination amongst Hongkongers — most of whom prefer the convenience of Taipei or dynamism of Shanghai. (A report by the Singapore Tourism Board indicates that Hong Kong visitor arrivals are down 0.41 percent this year.)

Consequently, in this instalment of our ‘Travel Guide’ series, we dispense with tourist traps and chintzy fountains, zeroing in on the very best that Singapore has to offer. We’ll point you in the direction of a legendary luxury hotel (newly reopened following a gargantuan 2-year restoration), uncover world-class libations that are blissfully without gimmickry, and familiarise you with a newer more visceral way to see Singapore. Needless to say: you won’t find any mega-clubs or airport malls here.

For additional on-the-ground coverage of all the latest dining, travel and cultural news, be sure to check out our sister website — LSA Singapore. 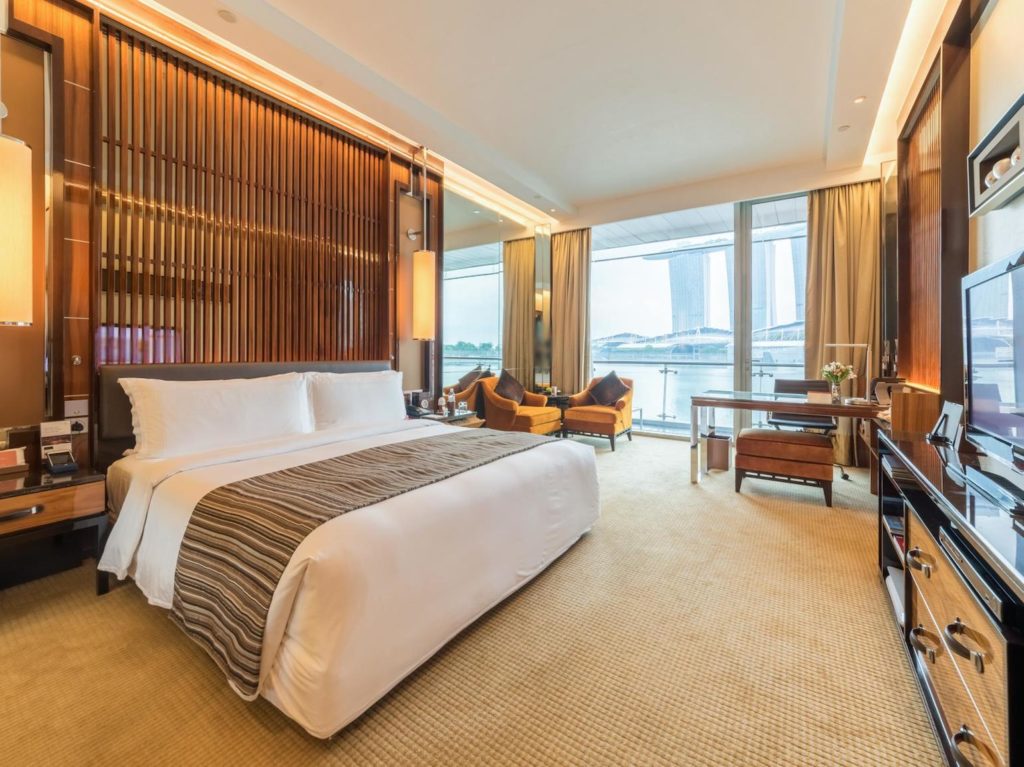 Architectural wunderkind André Fu may be best known for stylish Hong Kong haunts like Upper House and the Kerry Hotel, but the award-winning designer’s work on The Fullerton Bay is equally worthy of attention.
Billed as the original Fullerton’s sleeker contemporary cousin, this entire 100-room property is waterborne, straddling the boundary between One Fullerton and the nearby Heritage Precinct. In-house attractions are plentiful — the rooftop pool boasts some of the best views in Singapore — though few of these rival the joy of setting foot in one of the hotel’s Premier Bay View Rooms. Featuring verdant outdoor sundecks and panoramic views of Marina Bay Sands, it’s the perfect vantage from which to break your fast or enjoy a tranquil sunset cocktail. 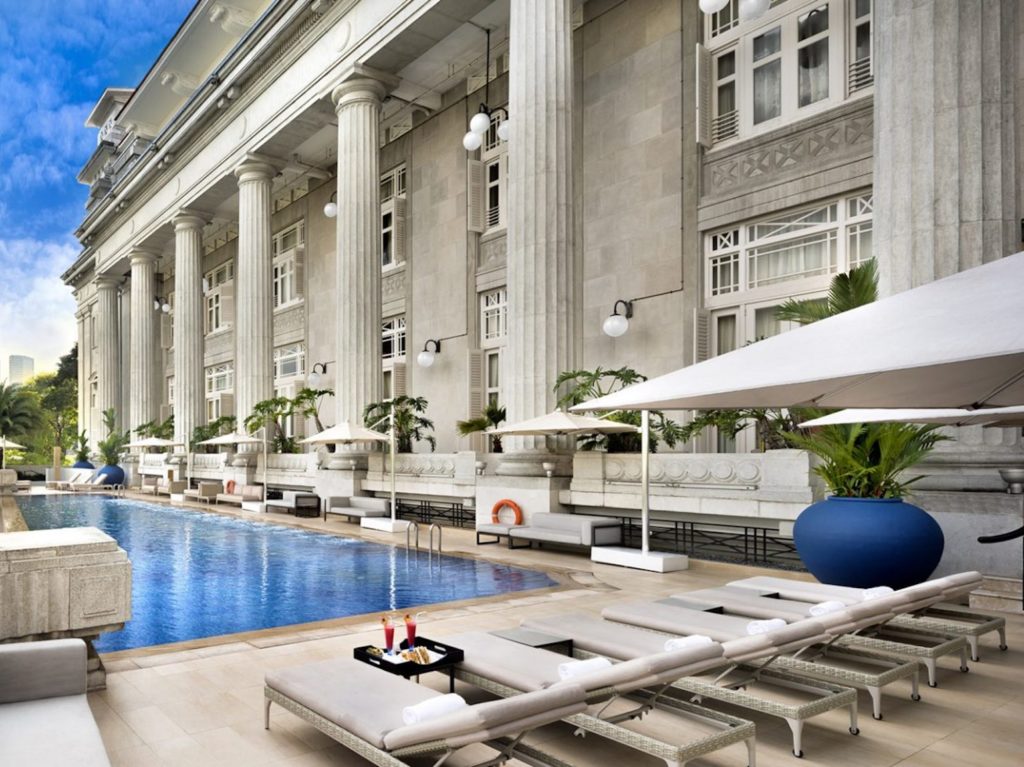 Originally erected in 1928 (and gazetted as a National Monument in 2015), The Fullerton is a grand dame of a hotel — steeped in Palladian architecture and the delicate scent of orchids. Guests staying on the premises have 400 rooms to choose from — we recommend something in the ‘Straits Club’ category, facing towards Marina Bay — in addition to five bars & restaurants, covering most of the city’s popular culinary bases. Think a killer buffet spread, Italian and fine Cantonese. 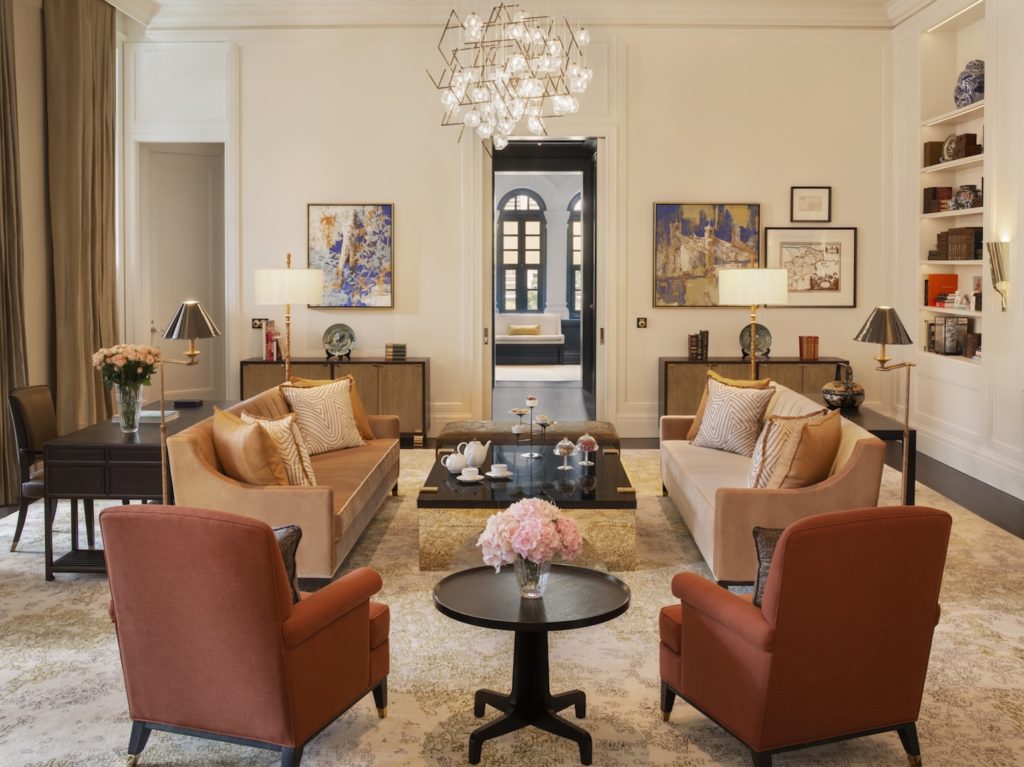 Birthplace of the Singapore Sling, preferred digs of Chaplin and Kipling — when it comes to iconic luxury hotels, Raffles needs no introduction. The 132-year old property just emerged, bigger and bolder, from an exhaustive two-year renovation; yet still possesses the same old-world glamour for which it is legendary. Guests alighting in the hotel’s driveway are treated to every sensorial pleasure: from impeccably uniformed door men to the underfoot crunch of freshly raked gravel.
Inside, a king’s ransom of new dining options have been added. Iconic spaces such as the hotel’s Long Bar are joined by restaurants from French masters Anne-Sophic Pic and Alain Ducasse, whereas a seven-room spa (located in the swanky Raffles Arcade) caters to guests who are eager to cut through jet lag.
Our take? Even if you aren’t staying in-house, take a moment to bask in the aptly-named Grand Lobby, before ducking your head into the accompanying ‘Writers Bar’ — home to what is quite possibly Singapore’s best martini. 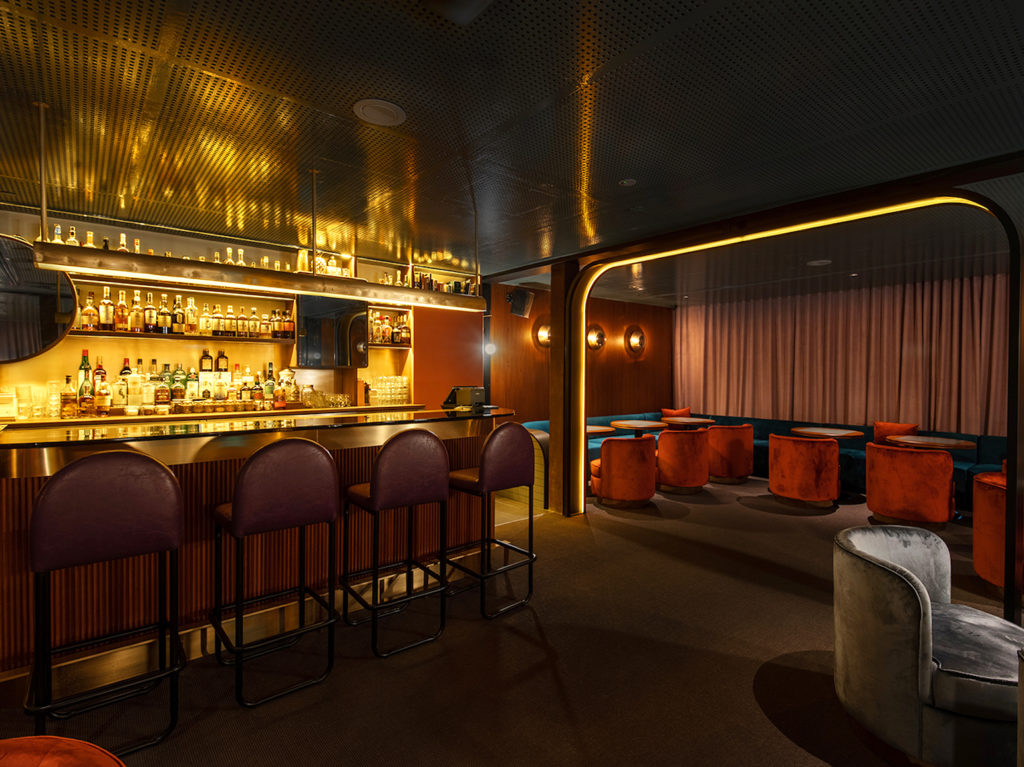 Regularly named one of Asia’s 50 Best Bars, Jigger & Pony (located off of the lobby of Amara Singapore) is a refreshingly old-school joint — the kind that embraces classic hotel cocktails that, as a rule of thumb, emphasise the titular jigger/pony measuring device. Head bartender Jerrold Khoo’s menu is blissfully compact: dedicated to tipples like the Ramos Gin Fizz or a blastingly cool, uber-refreshing Moscow Mule. Reservations on Fridays and Saturdays are highly recommended. 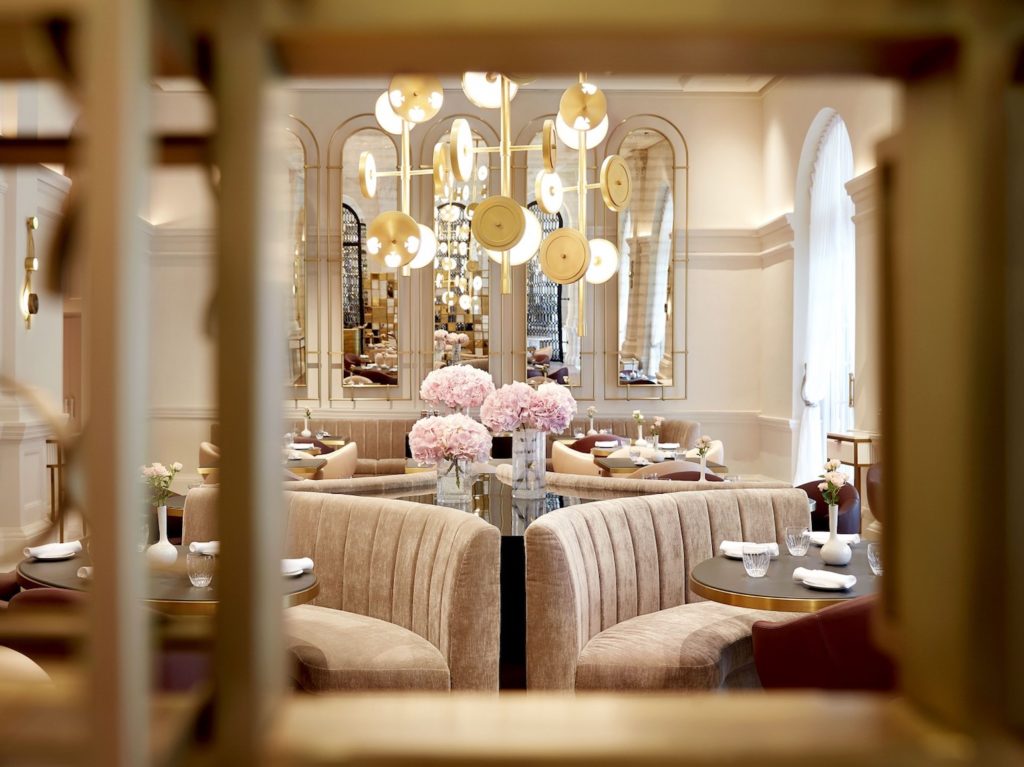 To be blunt, Singapore isn’t exactly suffering from a deficit of fine French diners, but if you only have time to secure one reservation whilst you’re in town then La Dame de Pic should be unequivocally ‘top of the pops’, as they say.
Anne-Sophie Pic’s inaugural outpost in Asia — nestled within the Grand Lobby of Raffles, no less — is a masterstroke of complex flavours and evocative presentation. Under the ministrations of protégé and Chef de Cuisine Kevin Gatin, the trappings of Pic’s Valentinois cuisine slowly reveal a clever, clandestine sense of place. Signature Berlingots — diminutive little morsels of cheese-filled pasta — are set to the pleasantly bitter thrum of emulsified Herb of Grace (an edible plant which Pic associates with her earliest memories of Singapore). Meanwhile, dishes like White Mille-feuille — a modernist cube of chantilly cream, concealing layer upon layer of brown butter pastry and grapefruit gel — are bound to tickle purists pink. Reservations are recommended. This marquee name in Hainanese chicken rice, which operates four shopfronts across its native Singapore, is an ever-reliable option for those craving fragrant, delicately poached poultry. Unlike many of its competitors, Wee Nam Kee exclusively sources chickens weighing between 2 and 2.2 kilos, cooking them in a lighter vegetable-based solution instead of chicken fat. For a balanced anatomical selection, you can’t go wrong ordering the ‘Signature’ plate — a combination of various white and dark cuts, interspersed with richly flavoured slivers of chicken liver. 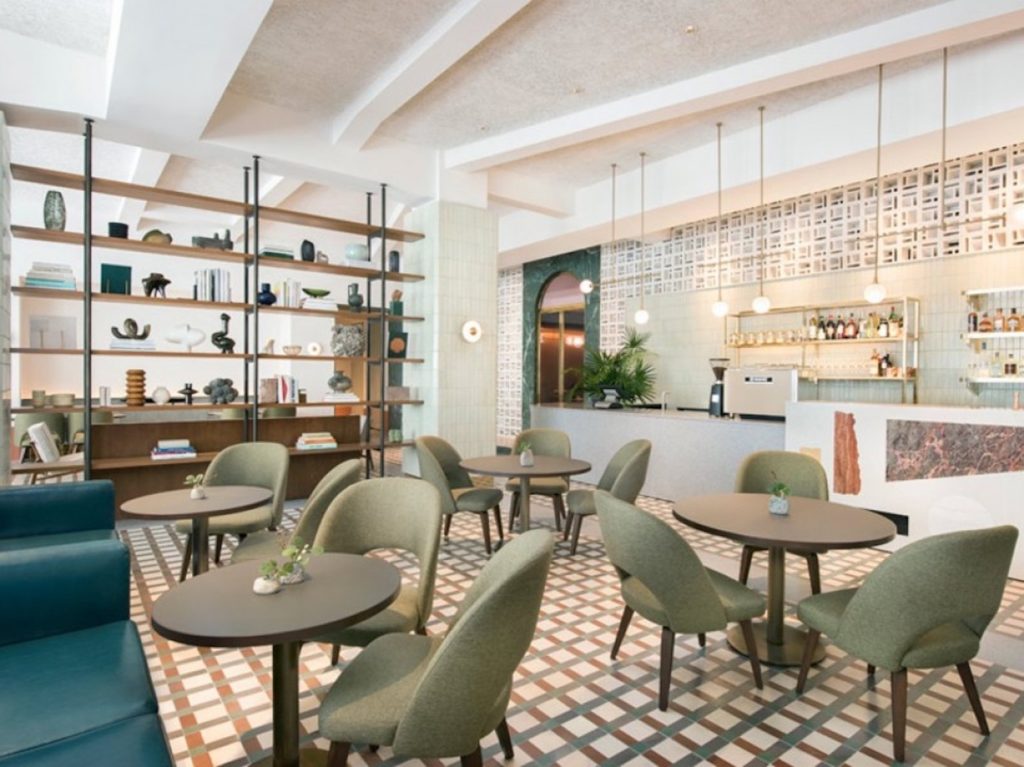 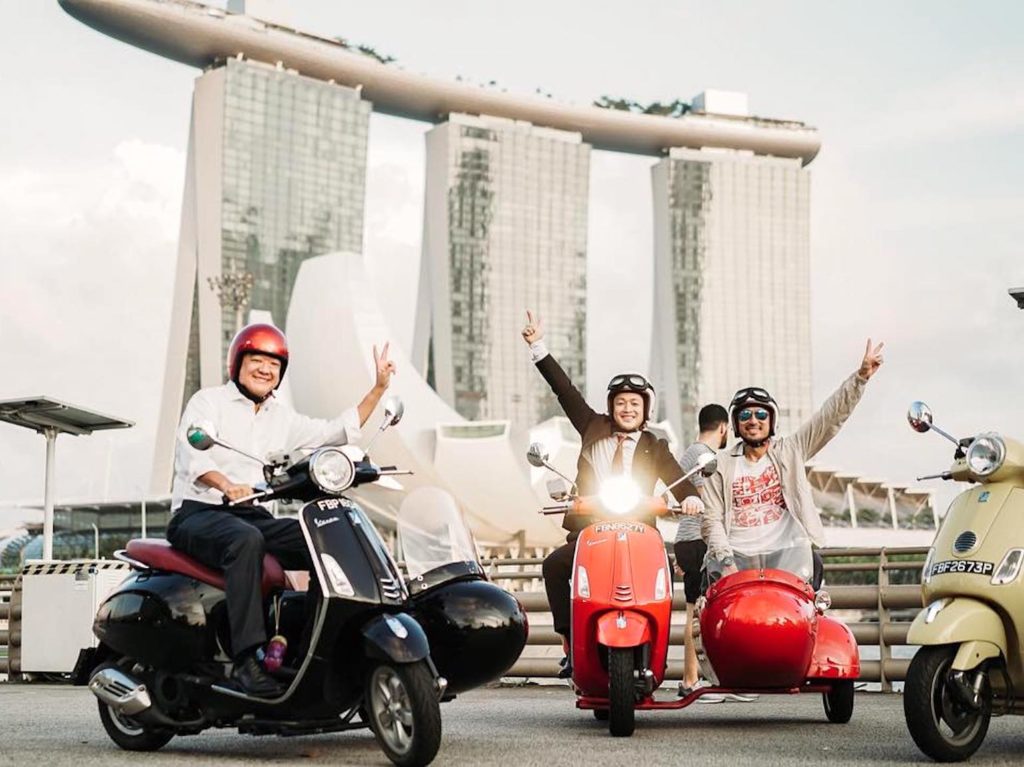 8
Tour the city from a vintage Vespa sidecar

Originally established as a social enterprise by Hongkonger Simon Wong, Singapore Sidecars offers you an exciting new way to sightsee in the Lion City. Namely: from the cockpit of a vintage Vespa sidecar. Tours range anywhere between one to four hours in duration, and can be tailored to suit a variety of interests. From rides which shall see you whooshing through glittering city nightscapes to heritage-themed excursions around Kampong Glam, the sidecar tour is an exhilarating (occasionally conspicuous) way to get the most out of a brief stay in Singapore. If it’s good enough for the Russo Brothers (Avengers: Endgame), then who are we to complain? 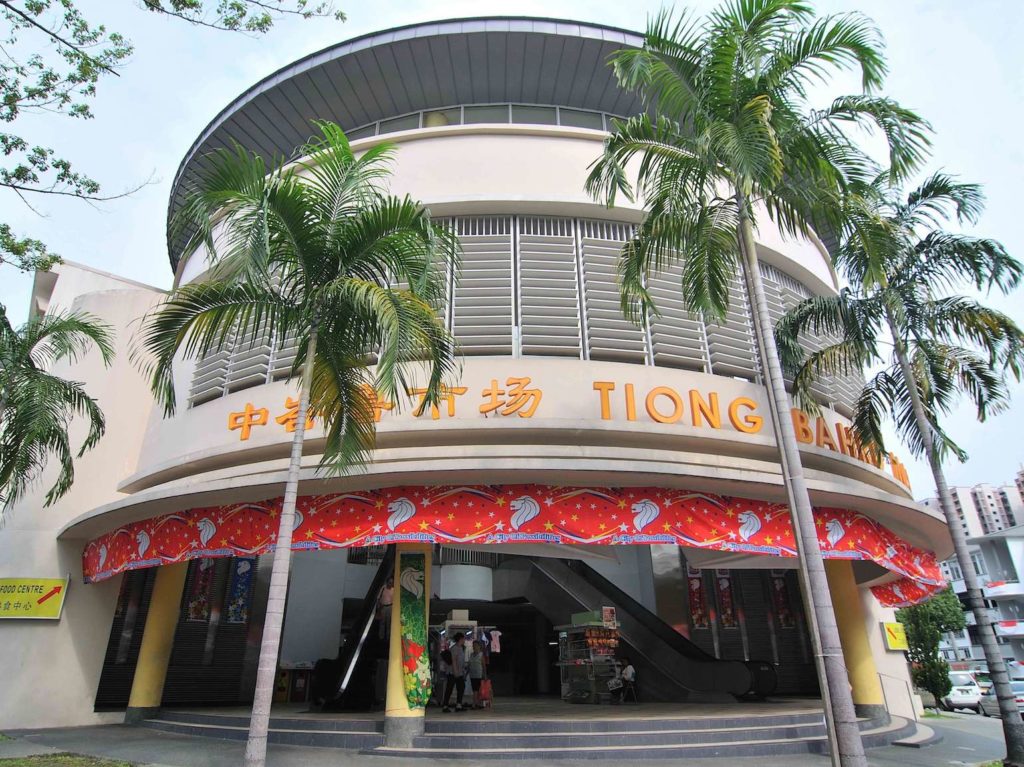 There’s no shortage of excellent hawker centres to be found throughout the Central Area of Singapore — shoutout to Lau Pa Sat and Newton — but if you’re looking for a side of heritage to be served with your char kway teow, we suggest Tiong Bahru Food Centre. Erected in 1955 (then known as Seng Poh Market), the complex is home to some of Singapore’s most traditional hawker fare. Lor Mee 178 serves a hearty bowl of unctuous, dark gravy soaked noodles, complete with shark nuggets; whereas Hong Heng’s Hokkien mee, served dry with the stall’s own homemade sauce of chilli, is so beloved that it has won Bib Gourmand status three years running. To avoid the lunchtime rush, we recommend visiting early on weekdays.

Singapore Travel Guide Raffles Singapore The Fullerton travel guides
Randy Lai
Editor
Having worked in the Australian digital media landscape for over 5 years, Randy has extensive experience in men's specialist categories such as classic clothing, watches and spirits. He is partial to mid-century chronographs and a nice chianti.
Style Watches Drinks Tailoring Travel

A list of luxury resorts in Langkawi welcoming international travellers