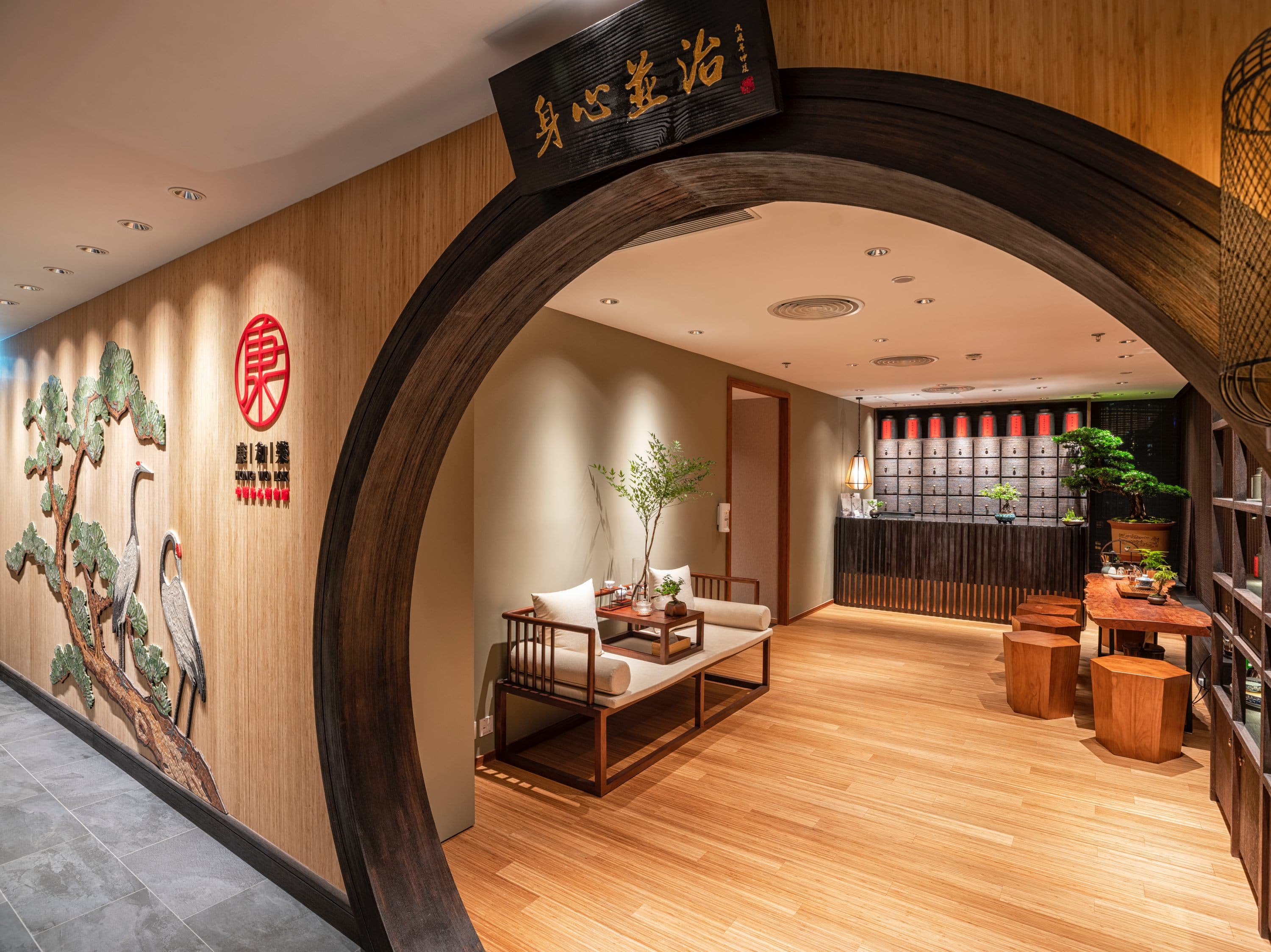 Let’s face it: we’re obsessed with balancing the imbalances in our bodies when it comes to wellness these days, and not just with physical wellbeing, but inner wellness too. Whether it’s taking 10 minutes to listen to a meditation app, doing a yoga sequence in the morning, making sure you get your weekly exercise in or drinking your favourite tonics to keep your digestion in top shape, we’re more attuned than ever to the importance of wellness — and exploring new ways to fit it in our busy schedules every day.

One particular avenue that’s growing in popularity when it comes to addressing stress-related issues is none other than traditional Chinese medicine. Working on the basis of preserving health by maintaining balance (rather than combating illness as it comes), TCM can be a particularly attractive method of alternative therapy for those interested in their holistic wellbeing.

Overlapping between a spa-like wellness centre and a health clinic, Hong Wo Lok (translating literally to ‘health and happiness’) is the first Therapeutic Chinese Medicine Health Club in Hong Kong, located in Tsim Sha Tsui’s Hillwood Road. Founders Tommy and Stella are a young couple who are long-time believers in the efficacy of maintaining health through TCM — Stella particularly, who relied on TCM to successfully manage her chronic menstrual pain throughout the years where generic medicine failed to do so. Former property investors in the UK, the two grew up and were educated abroad, but decided to base themselves in Hong Kong to build their passion project together.

A trip to Hong Wo Lok is far from an ordinary visit to the Chinese practitioner’s office. Stepping into Hong Wo Lok, chances are you’ll be welcomed by the friendly presence of Teddy, the resident therapy dog (or “Dr. Ip,” as he is affectionately known) who can instantly brighten up your day from the get-go. A first visit starts with a comprehensive personal consultation; mine took over 40 minutes to go through my current health concerns, past illness history, and daily eating, sleeping and even bathroom habits. It got a little awkward telling Practitioner Zhou about my bowel movements and periods, for instance, but he embraced all of it professionally without the bat of an eye, and was very determined to find the root of my health problems. Namely for me, my main concerns were bad digestion and bloating (with this season of indulgent eating, can you blame me?), and Zhou asked me plenty of questions, some requiring a detailed knowledge in western medicine as well to properly determine my health state.

After Zhou took my pulse, I almost got a sense that I was at a fortune teller rather than a Chinese doctor. Zhou mentioned my pulse felt ‘rough,’ like running your finger across a serrated edge rather than a smooth, unblocked one of a healthy pulse, and that this was indicative of a heart or lung disorder or emotional stress (all bingo, thanks to being born with a weak lung and some heavy personal gripes I was handling that week). I was diagnosed with a phlegm-dampness constitution, which, disturbing as it may sound, just means I tend to collect more dampness in the body than others.

Dampness is a major no-no according to TCM. Normally associated with weak kidneys, spleen and sometimes a weak lung, as well as a result of over-eating and over-indulgence. It often manifests itself in lethargy, heavy limbs, or profuse sweating. It can make us swell up and it can also block regular bodily functions. With this, Zhou gave me a chart of foods belonging to certain categories along with a cold-heat spectrum that I could eat: Crab, considered “cooling” or lamb and offal, considered “hot” and “warm” respectively, were foods I had to avoid, and instead stick to the milder foods in the middle of the spectrum, including white fish, chicken and root vegetables. The dampness inherent in my body type, according to the TCM perspective, could be easily exacerbated by heaty or cooling foods. I was also recommended a session of Ginger Moxibustion along my front and leg meridians to boost the yang energy and blood circulation to help dispel that dampness. Finally, I was prescribed a digestive tea that I could take home.

Among other therapies available at Hong Wo Lok — from tui na massages and lymphatic detox sessions to fascia stretching therapy to cupping to even ovary and breast health massage — one of the most unique is Ginger Moxibustion. More popular in mainland China, Hong Wo Lok is one of the few registered centres that can do the treatment in Hong Kong. Moxibustion involves lighting a cone of moxa, or crushed mugwort, and using the heat and smoke to stimulate blood and qi energy circulation in the body. Ginger Moxibustion, a method favoured for digestion issues and joint pain, adds a layer of ginger between the skin and moxa, allowing the heat to penetrate through the ginger. With the strong medicinal smell of this particular treatment, Hong Wo Lok has a dedicated room with special gear to help soak up all the smoke so the whole centre doesn’t smell like a herbal barbecue.

Prepping for the hour-long Moxibustion session, my therapist massaged me vigorously from shoulder to calves, and even gave me a firm stomach rub knowing I had bloating troubles. Then, I was covered in towels except for a long strip of gauze running from my chest to my abdomen, where my therapist then laid down a bed of warm, juicy ginger shreds that had been freshly heated up. I could smell the aromatic ginger already beginning to warm up my body, like how a comforting sip of hot tea in the winter zaps its warmth all the way to your fingertips.

Placing the moxa dollops along my stomach, she began to light them up. She positioned transparent trays above me to catch all the smoke; I felt like I was a cross between laying on an operating table and a human buffet, and as my therapist patted the bed of ginger on, it looked more and more like she was cooking some kind of strange fried rice on my body.

As the herb burned, I felt at first a soft warmth engulfing my exposed skin, but after a few minutes as the heat expanded through the ginger, my body began to sweat — my arms and back were drenched, I was sure. I was unable to move under the mound of ginger, and she had also strapped wooden moxibustion boxes to my legs; on my shins, ankles and knees along the two meridians there. Pain here was directly linked to the health of the digestive system too, according to TCM wisdom, she said.

There I lay for a good part of the session as the moxa continued to burn. When she added more mugwort to my stomach, I eventually felt a gentle searing heat penetrating my body, to which she adjusted the positioning of each dollop accordingly when it got unbearably hot. I was really sweating — my chest and face feeling pink and my body feeling just a little too toasty, and my lower legs, normally cold after lying down too long, were also comfortably warm.

When I emerged from the moxibustion room, surprisingly my hair and belongings didn’t smell much of the herbal medicine. I felt pumped; lighter, detoxed somehow, or could it have been a placebo? Moxibustion is known to be popular for pregnant women with breech babies, with sessions used to help their baby turn before birth. I hoped it had done something to the qi in my body too.

One of the highlights of the session was the post-therapy tea — guests are invited out on the veranda, a tranquil and green space overlooking an unexpected miniature forest in the backyard of Tsim Sha Tsui. Looking down into the old weather observatory, the 16th floor location was perfect so as to not catch any of the road noise downstairs, but still catch the sounds of gentle birdsong from the not-so-distant trees. The perfect place to sip a fantastic quality tea in solitude before braving the streets below once again.

Whether it was the tea, the massage or the truly blood-pumping moxibustion session, I can definitely say that I found less bloat in the next ensuing days, plus my digestive system seemed to have gotten a wake-up call, with food in one end and out the other several times a day (if you’ll excuse the TMI). But I’d have to say I am most taken by the comfortable atmosphere of Hong Wo Lok and the detailed knowledge I gained about my own health, with a rare English-speaker-friendly experience of Chinese medicine. I look forward to checking out other therapy offerings at the centre next time I feel like my insides need some recalibrating, and sipping tea on the veranda with Dr. Ip sitting by my side.

Sessions at Hong Wo Lok start from HK$350 for a first-time TCM consultation and HK$770 introductory price for Ginger Moxibustion, with member prices to follow. Service costs can be deducted from a membership package that can be shared between family members. A mobile app is also available for members to keep track of their health reports and reservations. Hong Wo Lok, 16/F, Nathan Hill, 38 Hillwood Road, Tsim Sha Tsui, Hong Kong, +852 2592 6000

What is eccentric exercise — and why should you incorporate it into your training programme?

How to Get Enough Protein On a Plant-Based Diet

Thirsty? These water tracking apps will help you stay hydrated