Home > Beauty & Grooming > Wellness > The surprising benefits of mushrooms, and how to incorporate them into your meals 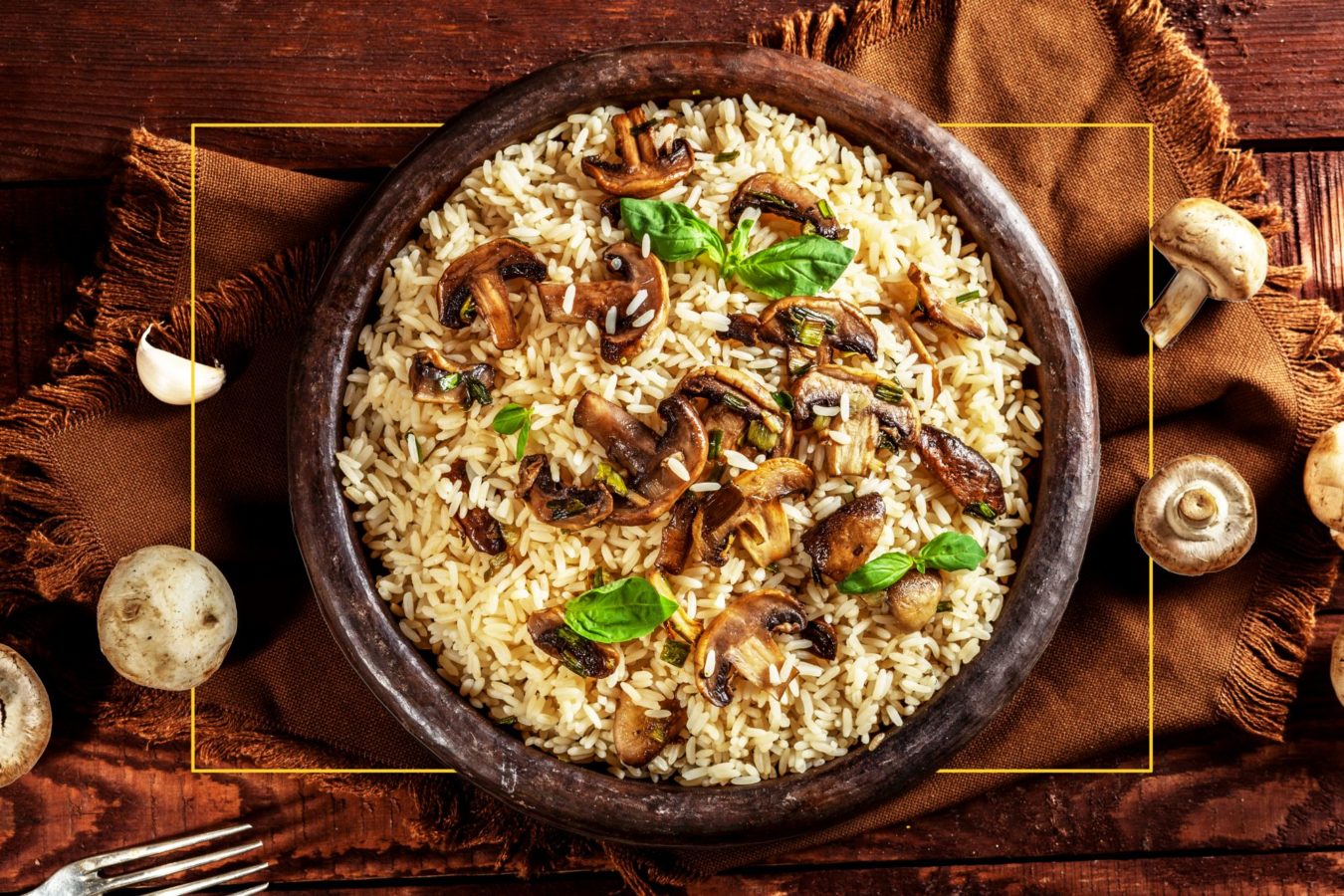 The surprising benefits of mushrooms, and how to incorporate them into your meals

Beauty & Grooming
The surprising benefits of mushrooms, and how to incorporate them into your meals
Share this article
Next article

Known for their meaty texture and umami flavour, mushrooms are some of the most interesting foods you can eat. They’re also nutritional superstars, thanks to their rich vitamin and fibre content. Plus, mushrooms are super versatile, as they can be enjoyed in soups, sandwiches, and more. Read on to learn about their health benefits, according to dieticians and research.

First, it’s important to get one thing straight: Mushrooms are not vegetables. They are fungi, aka organisms that produce spores (reproductive cells), according to Colorado State University. Each mushroom has a stem and fleshy cap, which is the “fruit” of the fungi and the part that you eat.

They vary in size, colour, and shape. There are also about 14,000 species of mushrooms (!!), but only 300-ish are edible, according to CSU. The most common varieties used in cooking are “white button, cremini, portobello, maitake, shiitake, enoki, and oyster [mushrooms],” says Jonathan Purtell, RD, a registered dietitian at Lenox Hill Hospital.

Others — including reishi, chaga, and lion’s mane — are known as medicinal mushrooms or “adaptogens,” meaning they help the body adapt to physical, biological, and or chemical stress. These varieties are mainly used as herbal supplements, and sometimes, in food. For ease, this article will mainly focus on those used in cooking.

The humble mushroom packs a nutritional punch. Collectively speaking, they contain protein, fibre, and nutrients such as vitamin D, B12, and C, according to an article in the International Journal of Microbiology. The vitamin D content is especially impressive, as mushrooms are the only non-animal food that offers the nutrient, according to an article in Frontiers in Pharmacology.

What’s more, they offer myriad antioxidant compounds, including polyphenols and carotenoids, according to the Harvard TH Chan School of Public Health.

To get an idea of mushroom nutrition, check out the nutritional profile of five raw shiitake mushrooms (~95 grams), a common household variety (though, their nutrition will vary depending on the type), according to the United States Department of Agriculture:

Sure, mushrooms aren’t veggies, but they’re still a nutritional powerhouse. Ahead, the science behind the health benefits of mushrooms.

Over time, oxidative stress can lead to chronic diseases such as heart disease and cancer, according to a scientific review in Oxidative Medicine and Cellular Longevity. To top it off, mushrooms contain beta-glucan, a type of polysaccharide (read: carbohydrate) with cancer-fighting properties, according to the Harvard TH Chan School of Health. Beta-glucans scavenge and get rid of free radicals, further enhancing their disease-fighting activity.

Medicinal or adaptogenic mushrooms (eg reishi and turkey tail) boast especially potent antioxidant, anti-inflammatory, and anti-cancer properties, according to a scientific review in the International Journal of Molecular Sciences. These also owe their health-promoting effects to beta-glucans, as well as many other types of beneficial polysaccharides, according to a scientific article in Annals of Translational Medicine.

Thanks to their vitamin D content, mushrooms help promote bone health. That’s because vitamin D supports the absorption of calcium, a mineral required for healthy bone density and strength, according to Isa Kujawski, MPH, RDN, registered dietitian and founder of Mea Nutrition.

ICYMI above, mushrooms contain beta-glucan. It’s a type of soluble fibre, meaning it dissolves in water, according to the Harvard TH Chan School of Public Health. Like most other soluble fibres, beta-glucan is a prebiotic, meaning it feeds the “good” bacteria in the gut, helping them flourish and grow. This supports a balanced gut microbiome, which is essential for proper nutrient absorption and digestion, according to an article in the journal Molecules.

On the flip side, if the gut microbiome becomes imbalanced, it can lead to digestive issues including inflammatory bowel disease (IBD) and irritable bowel syndrome (IBS). But thanks to their beta-glucan, mushrooms can keep your gut microbiome in check.

The beta-glucan also helps to regulate blood sugar. Again, beta-glucan is a soluble fibre, meaning it dissolves in water in the gut. When this happens, the fibre turns into a gel-like substance, says Kujawski. This slows down the absorption of glucose in the small intestine, and therefore, your bloodstream. The effect prevents sudden blood sugar spikes, which is key for staving off type 2 diabetes.

Otherwise, “frequent spikes in blood sugar can blunt the body’s ability to use glucose,” resulting in type 2 diabetes, explains Kujawski. (Specifically, insulin — the hormone that normally shuttles glucose from the blood and into cells — stops working effectively, she says.) However, the beta-glucans in mushrooms can keep blood sugar levels in check, ultimately lowering type 2 diabetes risk.

High blood pressure and high blood cholesterol are two major risk factors for heart disease, according to the Centers for Disease Control and Prevention (CDC). But luckily, mushrooms contain nutrients that target both issues. Firstly, the potassium in them regulates blood pressure.

It works by easing the tension of blood vessel walls, thus reducing high blood pressure, says Purtell. Potassium also increases the excretion of sodium in the urine, he adds. This is noteworthy because excess sodium can constrict your blood vessels and increase blood pressure, according to the University of San Francisco California.

Secondly, the beta-glucans combat high blood cholesterol since the fibre binds to cholesterol in the small intestine, according to Purtell. From there, fibre is excreted in the stool, bringing cholesterol along with it. This prevents cholesterol from entering the blood, says Purtell, which keeps levels within healthy limits.

Not all mushrooms are equal. Avoid any you find in the wild (eg while hiking in the woods). Many wild mushrooms (such as death cap and webcap mushrooms) contain toxins, which can cause diarrhea, vomiting, confusion, and hallucinations — and sometimes, kidney or liver failure, according to Colorado State University.

The exception is if you, or someone you’re trekking with, know how to forage and identify safe mushrooms. (Mushroom identification books can serve as a resource for those interested in foraging.) Otherwise, your safest bet is to stick to the stuff from the store.

How to Buy, Prepare and Eat Mushrooms

Although they aren’t veggies, you can find raw edible mushrooms in the produce section of the grocery store. As mentioned earlier, there are many types available, from shiitake to portobello. Different mushrooms have different flavours and textures, says Purtell, so there’s truly something for every dish. You can also find mushrooms frozen, canned, pickled, or dried. Some ready-made dishes, such as frozen entrees or pizzas, may also contain mushrooms.

When buying raw ones, look for shrooms that are firm and evenly textured. Avoid the ones that are slimy, discoloured, or blemished, as these are signs of spoilage, according to the Institute of Culinary Education. Also, consider how you want to use the them, as this will dictate the best fungi for the job.

For example, if you want to make stuffed mushrooms as an appetiser, choose a smaller variety such as white button mushrooms. Or, if you’re craving a hearty sandwich sans meat, pick portobello mushrooms, which are about the same size as standard burgers.

On that note, mushrooms are the MVPs of vegan and vegetarian dishes. “Due to their versatility, [meaty] texture, and a savoury flavour, many vegans [and] vegetarians rely on mushrooms as a staple substitute for traditional meat-based dishes, such as burgers or soup stocks,” says Kujawski.

Moreover, they offer nutrients that are often low or missing in vegan or vegetarian diets, including vitamin D, iron, and zinc notes Kujawski. So, if you’d like to incorporate more vegan/vegetarian/plant-based meals into your routine, consider reaching for mushrooms.

At home, it’s best to follow certain techniques for storage and preparation. That’s because mushrooms are like sponges, so they absorb moisture easily — a situation that promotes spoilage. Raw mushrooms should be stored in the refrigerator for up to a week in an open brown paper bag, according to the Harvard TH Chan School of Public Health.

The bag will help absorb moisture, unlike the plastic wrapping typically surrounding supermarket mushrooms. Before using, gently rinse the mushrooms under running water and remove any dirt with a damp paper towel. You can also use a mushroom brush which is designed just for this purpose.

From there, you can eat them whole, sliced, or diced whether they’re raw or cooked (eg boiled, grilled, roasted, baked, or sautéed). To retain as many nutrients as possible, you should sauté them briefly over high heat or simmer them over low heat (such as in a stew or soup), according to the Harvard TH Chan School of Public Health. Methods that use high-heat water (think: boiling) can cause the nutrients in mushrooms to leach into the water.

Though many people love the meaty texture of mushrooms, it’s not for everyone. Sound familiar? Try using dried or powdered mushrooms as a seasoning/flavour enhancer in your meals, suggests Kujawski. You can also blend raw mushrooms into soups or pulse them into tiny bits for dishes such as stir fry. This way, you can enjoy the umami flavour mushrooms without the texture, says Kujawski.

How to Use Mushrooms

Generally, mushrooms work well in any savoury dish that needs an extra oomph. Here’s some cooking inspiration to get you started:

As a cooked side dish. For a simple side, sauté or grill them with your favourite seasonings and produce. The umami flavour will complement many types of produce, as seen in the summer squash and shiitake mushrooms and grilled maitake mushrooms with tart plums recipes.

In eggs. Elevate your morning meal by adding chopped or sliced mushrooms (of any kind) to omelets or a frittata. You can even give eggs benedict a vegan spin with the spinach and portobello benedict.

As a burger. Grilled portobello mushroom caps make for excellent sandwich fillings. Simply cut off the stems, marinate the cap in spices and olive oil (or your fave sauce) for 10-ish minutes, then grill for three minutes until caramelised. Try the grilled portobello burger with basil mayo for a delish vegetarian meal. Alternatively, you can pulse mushrooms with other ingredients (such as whole grains) and form them into patties, as with these mushroom-barley burgers with sage.

As a stuffed appetiser. Stuffed mushrooms are a classic appetiser — and for good reason. They’re party-friendly, versatile, and delicious. Try this recipe for baked stuffed mushrooms, which calls for white button mushrooms and a Parmesan filling.

In soup. Bulk up your winter soup with mushrooms. The chicken and mushroom ramen, which features shiitake mushrooms, ginger, and chicken stock, is a 10. For a vegan option, make the vegan kale and mushroom soup.