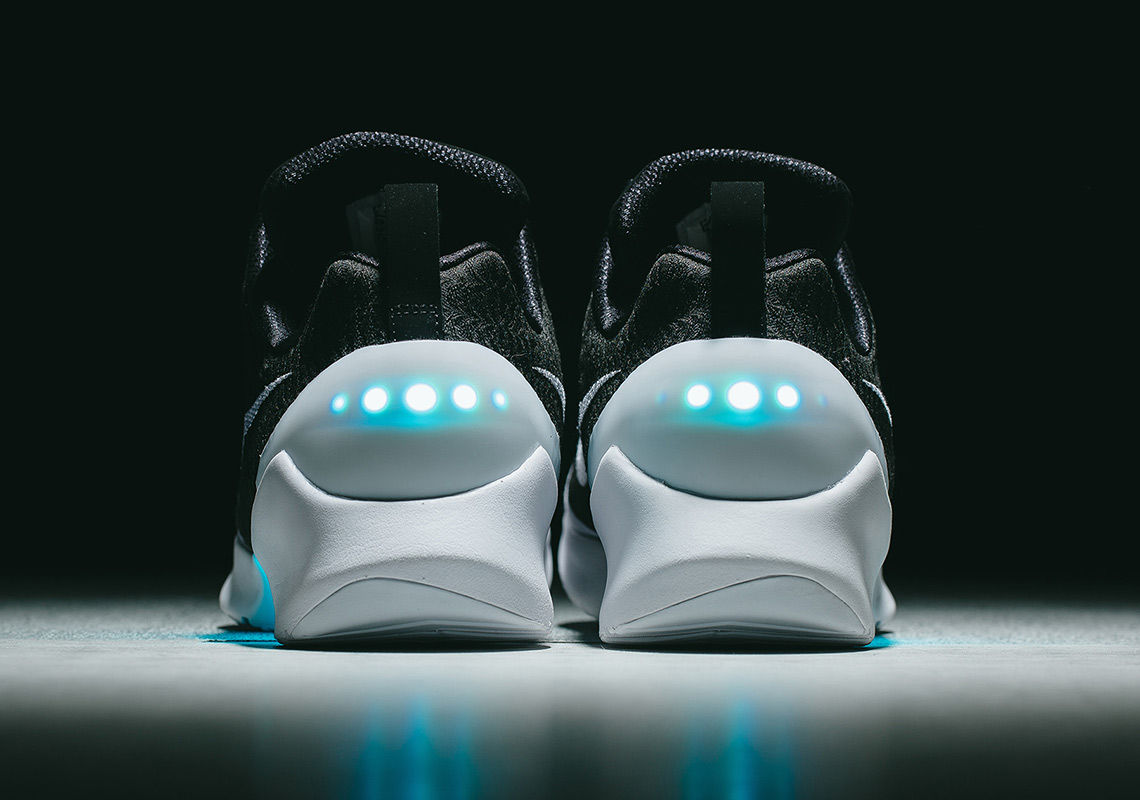 If you’ve watched the Back to the Future movies as a kid, there are a few scenes that would’ve stuck over the years. The DeLorean taking off might be top of your list, as would Marty zipping around on a hoverboard. Then there are his Nike Mags, the self-lacing shoes that transcended pop culture and attained cult — almost holy grail — status in the footwear world.

But just like how the DeLorean didn’t actually fly, the fictional Mags couldn’t lace themselves. Nike had to wait several years for technology to catch up. In 2016, 89 pairs of fully functional auto-lacing Mags surfaced, one of which became the world’s most expensive pair of sneakers at auction, which sold for S$136,000.

Now for the mere mortals who can’t be bothered to tie their own shoelaces, Nike hasn’t forsaken you. Created by Swoosh design legend and sneaker provocateur Tinker Hatfield, the HyperAdapt 1.0 will finally be coming to Singapore, and yes, you’ll never have to bend down nor trip over your laces again.

Made to cater to the increasingly tech-driven athletic market, the Nike HyperAdapt 1.0 shoes are the first performance vehicles to drive the brand’s adaptive lacing technology.

Tension and lacing preferences can be as personal an affair as the shoe’s design, but Tiffany Beers, Nike’s senior innovator, has it all figured out. “When you step in, your heel will hit a sensor and the system will automatically tighten. Then there are two buttons on the side to tighten and loosen. You can adjust it until it’s perfect,” she explains.

Style
The history behind the hype: Nike Air Force 1s

Hatfield wanted the HyperAdapt 1.0 to be a serious game changer for athletes. The American extraordinaire is, after all, the creator of Air Jordans, Huaraches, and Air Max 1s — all of which were technically and aesthetically shocking during their time. He promises precise and swift micro-adjustments on the fly, so tight tying and slippage from loose laces will no longer hinder performance.

Let’s not ignore the fact that the sneakers light up too.

While it’s still a manual process, Hatfield hopes to create a nearly symbiotic relationship between the foot and shoe in the future. “Wouldn’t it be great if a shoe, in the future, could sense when you needed to have it tighter or looser? Could it take you even tighter than you’d normally go if it senses you really need extra snugness in a quick manoeuvre? That’s where we’re headed. In the future, products will come alive,” he muses.

If you can’t wait for that future, the Nike HyperAdapt 1.0 will be only available in-store at Dover Street Market Singapore from 12 April 2018 onwards in three colourways. If you’re unsure about committing to the S$999 price tag, Nike will be holding trial sessions from 12 to 14 April so you can test out the underfoot lacing mechanism that we promise will be all the hype.

Nike Dover Street Market Singapore Nike HyperAdapt 1.0 self-lacing shoes nike self-lacing shoes back to the future iconic shoes collectible sneakers Nike Mag Tinker Hatfield sneaker launch
Shatricia Nair
Managing Editor
Shatricia Nair is a motoring, watches, and wellness writer who is perpetually knee-deep in the world of V8s, tourbillons, and the latest fitness trends. She is fuelled by peanut butter and three cups of coffee a day.
Motoring Wellness Watches Beauty Style
Sign up for our newsletters to have the latest stories delivered straight to your inbox every week.