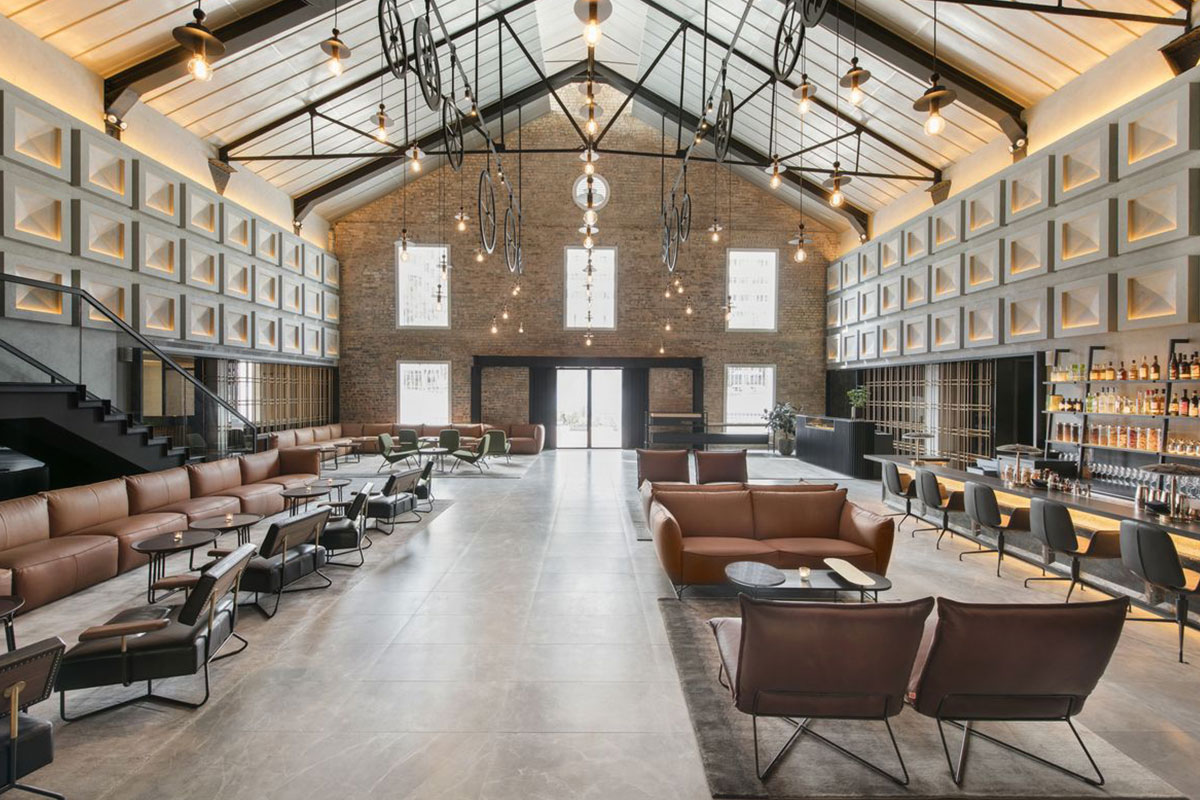 Is there a Singapore design identity? Chris Lee of Asylum responds

Culture
Is there a Singapore design identity? Chris Lee of Asylum responds
Share this article
Next article

It’s a Thursday morning, and we’re spending it at the headquarters of cross-disciplinary firm Asylum, which spans over three floors of a converted shophouse in the eclectic Geylang district. Our agenda for the day? To have a chat with Chris Lee, the founder of the firm, and pick his brains on the state of design in Singapore, as well as what he thinks about our design identity.

After all, Lee is renowned for being one of the trailblazers of Singapore’s design scene. He started the agency on his own back in 1999, back when there was a dent in the local market for design firms. Twenty years later, the firm is now one of Singapore’s success stories, garnering many accolades along the way. Its latest is the design of the year for The Warehouse Hotel at the Presidents’ Design Award 2018.

Congrats on receiving the ‘Design of the Year’ at the President's Design Award 2018. What was it like to design a heritage hotel?

Everyone knows the warehouse disco which opened in 1986 and closed 10 years later. So everyone knew of the building, but nothing has been done to it for a very long time. When the client first came to me to conceptualise The Warehouse Hotel, I knew immediately that it would be a great project; and in the back of my mind, the pressure was there. We were very mindful that we won’t screw it up.

In Singapore, shophouses are abundant — but warehouses are a rare find. Our focus was to make it relevant for today, but with a whole level of comfort. We didn’t want it to be a budget design hotel. From day one, we were always brainstorming about who we wanted to attract. It’s a certain group of people who appreciate design and luxury.

What were the factors that went into designing the hotel?

The warehouse began as an illegal distillery for moonshine alcohol before becoming a disco. These were the stories we could dig out and then populate the space. Part of the reason why we do interiors is that we’re storytellers. This is the same with graphic designing. If you design a brochure, it’s not just the layout, but also how you tell the story. It’s the same thing for space. It’s how you layer a story within the space so it’s more meaningful and contextual.

The Warehouse Hotel is our first full hotel project, and the number of accolades we won was just unforeseeable. What can you foresee in the future regarding heritage buildings in Singapore?

I think most heritage buildings are already being converted to hotels. The Straits Clan, which we did the branding for, is an example of a very good use of heritage building being repurposed into a private club.

The government is doing a good job securing these buildings to make sure local architects and designers can keep doing interesting projects and change the Singapore landscape as we know it. But maybe we should also expand the word heritage to something that’s not just old, but also significant to protect. If we do that, maybe they’ll open up a new range of buildings, such as old post offices. If you have more of these areas, there’ll be more opportunities to do something interesting.

What do you think is the state of design in Singapore now?

Design is changing very quickly. The type of work is also moving at a fast pace. When I first started, there weren’t as many opportunities; but there also wasn’t that much competition. Today, opportunities abound. You find a lot of young entrepreneurs coming out to do stuff. The design companies multiplied by dozens. It’s more competitive today; but is more exciting at the same time. In my opinion, if the design scene is moving at this pace, the designers themselves need to look out of Singapore to be able to harness on the expertise and do projects outside Singapore.

If everyone is happily contained here, there are not enough projects to go around. Singaporean designers and companies have a certain skill set, they’re very resilient. That’s the culture of design in Singapore. We are limited on resources that we do things we don’t readily have. You see people starting magazines or film festivals on their own. They think, “things that are interesting that do not yet exist in Singapore, let’s just do it.”

There isn’t a Singaporean style in design. In my opinion, people are influenced by the design identity from Japan or the UK or US, for example. There’s a certain attitude that we have that’s more prevalent in that design style, for example.

How is the industry different now compared to when you first started out?

Back then, it was really a blank canvas.

I started the company in 1999 because I thought the Singapore design scene was too sterile. I thought to myself, why couldn’t we become like the UK or Japan; these countries are vibrant and good with design? I felt like I needed to contribute to the local scene, that’s why I started Asylum. From there, we just took every opportunity to be different and make a dent in the industry.

There was a generation of design companies during that period. Our work was getting recognised internationally, winning awards and the local scene was just progressing. Today, there are many clients with big projects, but also really small companies; so everyone has to work harder.

Was this difficult to pave your own way when you first started?

Naturally, when you don’t have a road in front of you, you just dance in the dark. And sometimes, dancing in the dark is not a bad thing. Younger designers now have trails in front of them. But that comes as a disadvantage, too. Because sometimes with trails, you have to pick one or the other. In our time, we just danced around and slowly morphed our own direction.

Now you see the design companies of my generation all doing very different things. Black, for example, specialises in government projects, while Higher focuses on curation. Everybody has moved into different tracks because we’ve found a niche based on our interests and strengths. Do you think Singapore has a specific design identity?

Visually, we don’t have one. But the attitude I mentioned makes up our cultural identity. From an outsiders’ point of view, Singapore is a success because we are so international. The Japanese, for example, come to Singapore and see us as the gateway to the world. Lots of design companies are doing projects overseas.

That is our strength, that we are nimble. Singaporean designers can really morph and be adaptable to different situations. The Japanese, given their long-standing culture, are very inward looking — so it’s hard for them to understand why we can be the way we are.

Our struggle is how you look national instead of international. Between one another, we took the international route. It’s something you have to sacrifice; because you can’t have your cake and eat it.

How does this translate to what you do with Asylum?

We have twenty years behind us, so we can now look forward. Before this, we were just doing the best work, any kind of work. Now that we have these 20 years, we know the projects that are behind us. Now, the projects we pick are those that significantly change the landscape of the cities they’re in. If we do a project in India, for example, we want to make sure the project has a huge impact on the space. We want to really find our voice in different parts of the world, and try to activate so it becomes a cultural exchange.

What do you think is the future of Singapore design?

Ironically, it’s for designers to work outside of Singapore and really just work to make the Lion City the office for Asia. The reason Asylum has an office here because it’s so easy to fly anywhere. I’ve resisted opening offices in Shanghai or Jakarta because right now, we’re at a really strategic position — so we make that convenience part of what we do. Our designers just fly everywhere. So yes, I think Singapore needs to be a bigger influence in Asia, if possible.

Within Singapore itself, the projects are still there and exciting — so it’s easy for young designers to make an impact. However, I’m worried about the ambitions of young designers now.

Why do you say so?

There are now a plethora of choices in life for them as they embark on their career. Although it’s good, the negative impact is that they don’t spend enough time perfecting their craft. Everyone wants to do a bit of everything and become freelancers. However, you can’t tackle bigger projects that way.

I think that’s the worry. No one wants to have a full-time job anymore, nobody wants to work a 9-5 job, and there’ll be no more major companies as a result. It’s not only happening in Singapore, but around the world.

What would be your advice to local designers who are just starting out?

For me, if you want to specialise in something, you need to put the time in to sharpen your skills. If you dabble in different things, it’s hard to find people who specialise in anything. Young designers need to have the passion, that’s the key thing.

Let the passion guide you, and the rest will come.

Interview Local Designers Chris Lee asylum
Dewi Nurjuwita
Senior Writer
Dewi Nurjuwita is a travel and design writer who can be found exploring the streets of foreign cities with passport in one hand and a cup of coffee in the other.
Travel Architecture Interior Design