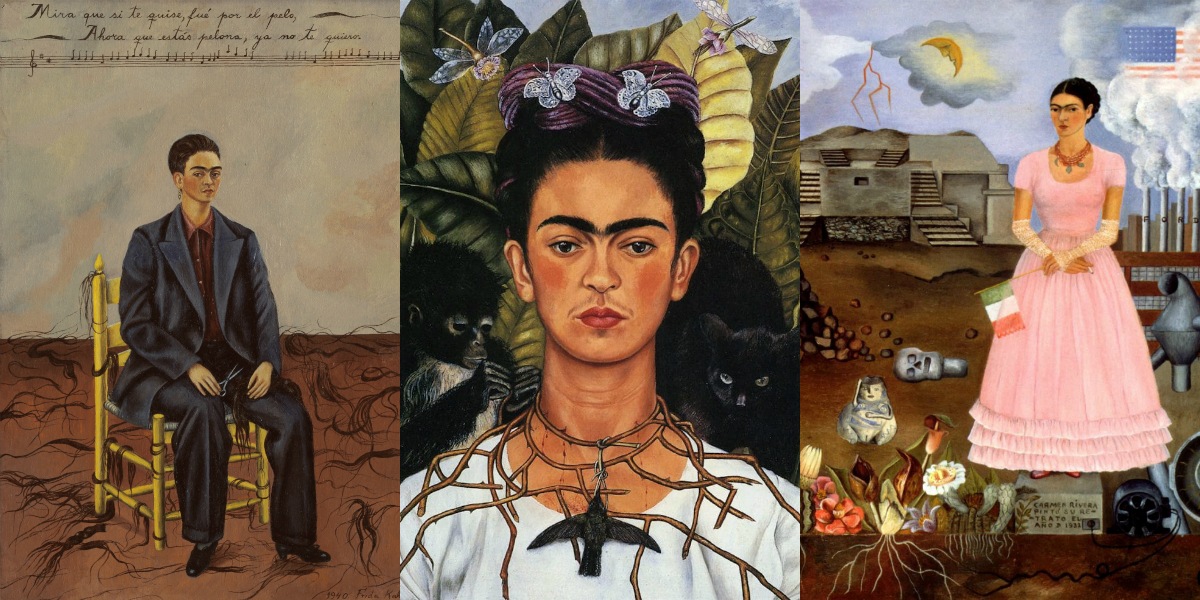 The meaning behind some of Frida Kahlo’s most iconic works

Sixty-four years after Frida Kahlo’s death, her charisma and powerful sense of style continue to captivate the world. The Mexican artist, famed for her self-portraits, is celebrated in her home country for her attention to indigenous culture, and by feminists worldwide for her depiction of the female experience and form. In fact, she was an advocate of feminism way before it became a “buzzword” in the social media age.

Aptly enough, her personal items are making their debut for the first time outside Mexico, where they had been locked away for 50 years in the Blue House (or casa-estudio), that the artist shared with her muralist husband Diego Rivera.

Her clothes, cosmetics and most intimate possessions are currently being exhibited at an ongoing showcase till 4 November at the Victoria & Albert Museum in London. Titled Frida Kahlo: Making Her Self Up, the exhibition will feature over 200 artefacts, giving the public a fresh perspective on Kahlo’s compelling life story (and how she fashioned her identity) through the iconic artist’s personal belongings. Highlights include a Guatemalan cotton coat with a Mazatec huipil belonging to the artist, a selection of Frida’s cosmetics and the prosthetic leg with a leather boot that she used to wear.

“This exhibition has brought together dress historians, art historians, jewellery and photography curators to show how Kahlo controlled and constructed her identity, her singular strength in the face of illness and adversity and the artistry with which she presented herself to the world,” said Claire Wilcox, Senior Curator of Fashion at the V&A and exhibition co-curator in an interview with Harpers Bazaar UK.

Culture
State of Art: 7 exhibitions to see in Singapore this June 2018

One of the most revolutionary artists of the 20th century, Kahlo is known for her self-portraits which were representations of her own life and emotions. Her paintings explored several themes from her ancestry and heritage to her struggles with childlessness and feminity. However, her most well-known artworks seem to revolve around two major events in her life: Her divorce from Mexican muralist Diego Rivera, and a nearly fatal accident she survived as a teenager.

To further understand the inner workings of Kahlo’s mind, we take a look at six of her most iconic works, as well as the stories and symbolism behind them. 1
Self-Portrait at the Border Between Mexico and the US, 1932

Following the couple’s marriage in 1929, Rivera received several commissions to paint murals in the United States — so Kahlo naturally followed. However, while her husband was happy with his success in America, Kahlo was homesick and miserable — with her experience living in “Gringolandia” inspiring the painting Self-portrait at the border between Mexico and the US.

The painting depicts Kahlo wearing a simple pink dress, standing on a pedestal in the centre of the picture. The background is full of images representing both countries. On one side, Mexico is represented by nature, vibrant colour and images of the Aztec culture, while on the other side, industry and technology allude to the USA. In her hand, she holds a Mexican flag, suggesting the country to which her heart (and loyalty) belong. Her first marriage to Rivera lasted 11 years. The Two Fridas, completed shortly after her divorce, is one of Kahlo’s most recognised compositions and is deeply symbolic of the artist’s emotional pain.

The double self-portrait shows the artist’s two different personalities — a traditional version of herself wearing a Tehuana costume, sitting next to an independent, modern-dressed Frida. While she initially wrote in her diary that the painting originated from her memory of an imaginary childhood friend, the artist later admitted that it expressed her desperation and loneliness from her separation.

The painting, which was acquired by the Nacional de Bellas Artes (National Institute of Fine Arts) in Mexico City in 1947, fetched 4,000 Pesos (about US$1,000 at that time) — marking the highest price Kahlo was ever paid for a painting during her lifetime. 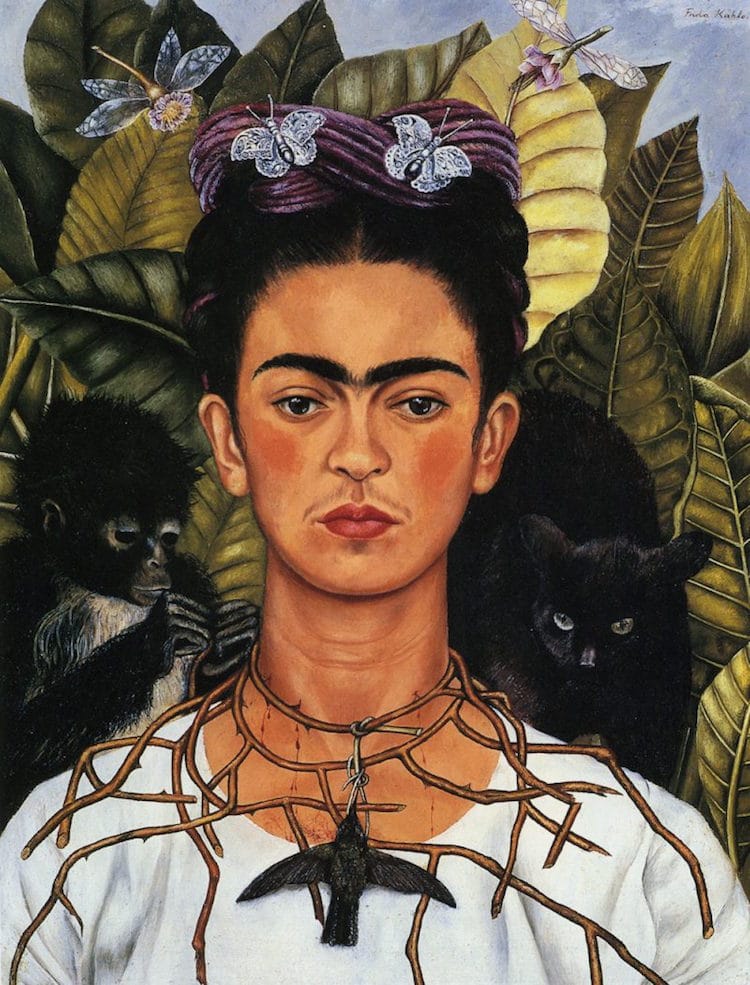 3
Self-Portrait with Thorn Necklace and Hummingbird, 1940

Out of 55 self-portraits Kahlo painted throughout the course of her career, the Self-Portrait with Thorn Necklace and Hummingbird remains one of her most widely-recognised ones. The piece, completed one year after her tumultuous divorce from Rivera, is widely believed to be a reflection of her emotional state following her divorce.

In the self-portrait, Kahlo wears a necklace made out of thorns and adorned with a seemingly lifeless hummingbird — a symbol alluding to the biblical Crown of Thorns. Her stoic expression in the painting is typical of Kahlo, who — even when devastated over her divorce — stated that “at the end of the day, we can endure much more than we think we can.” 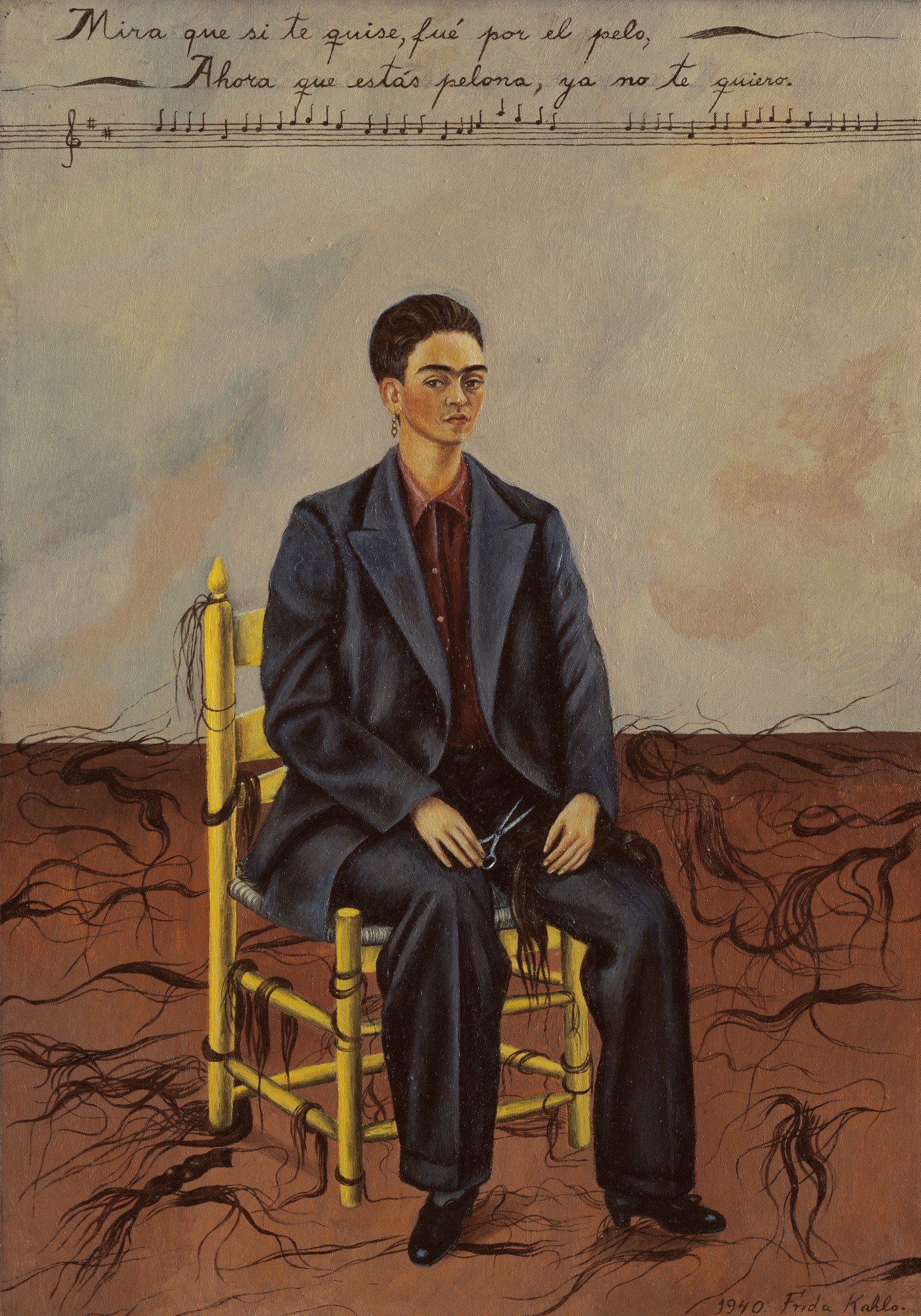 Kahlo chopped off her long hair a month after she divorced her unfaithful husband, and painted Self-Portrait with Cropped Hair shortly after. The artwork — in which she depicted herself with short hair and in a man’s shirt, shoes and oversized suit (presumably her former husband’s) — is a contrast to her previous self-portraits, where she wore Mexican women’s traditional dresses and flowing hair,

She holds a pair of scissors in one hand and a lock of hair in the other, representing the times she would cut the hair Rivera loved when he had affairs. The scene is accompanied by a sequence of musical notes — lyrics from a Mexican folk song that, when translated, read: “Look, if I loved you it was because of your hair. Now that you are without hair, I don’t love you anymore.” 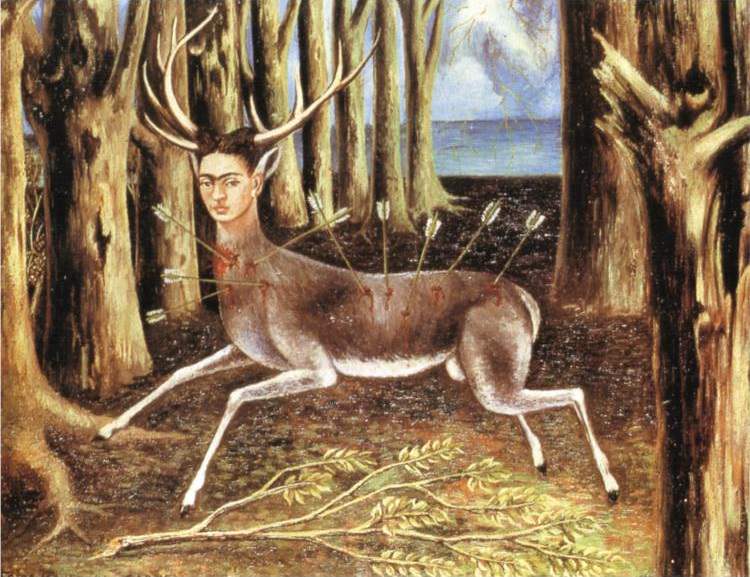 Kahlo is famed for her ability to replicate her unbearable pain onto other images — in this case, a deer with her face on it. The Wounded Deer was painted after her spinal surgery that she underwent to lessen her pain, but on the contrary, brought even more backaches.

The painting depicts a deer fatally wounded by a bunch of arrows, left alone in the middle of the forest — implying the feeling of fear and desperation. In the distant background is the stormy, lightning-lit sky which signifies hope that the deer will never be able to reach. Kahlo completed the painting by scrawling the word “karma,” meaning “fate” in the lower left corner. 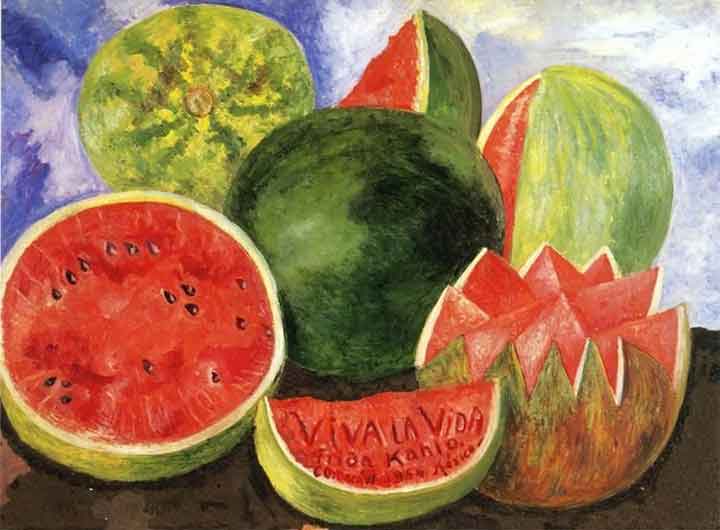 Known to be the last painting Kahlo did, completed just eight days before her death, Viva La Vida continues to be one of the most important artworks in history — and have inspired many artists, actors and musicians over the years.

While some art critics may argue that the watermelons were painted much earlier, the inscription, meaning “Long live life” or “Live the life” was her famous last words. For an artist plagued by pain and suffering throughout her short life (Kahlo died from pulmonary embolism), the vibrant colours and title of the artwork form a surprising tribute to life — and are testament of Kahlo’s strength and fierceness. In her own words, she hoped that “the exit is joyful, and I hope never to return.”

London Mexico Frida Kahlo Feminism frida kahlo exhibition V&A museum 20th century artists Victoria & Albert Museum Frida Kahlo: Making Her Self Up Self-Portrait at the Border Between Mexico and the US The Two Fridas Self-Portrait with Thorn Necklace and Hummingbird Self-Portrait with Cropped Hair The Wounded Deer Viva La Vida
Dewi Nurjuwita
Senior Writer
Dewi Nurjuwita is a travel and design writer who can be found exploring the streets of foreign cities with passport in one hand and a cup of coffee in the other.
Travel Architecture Interior Design