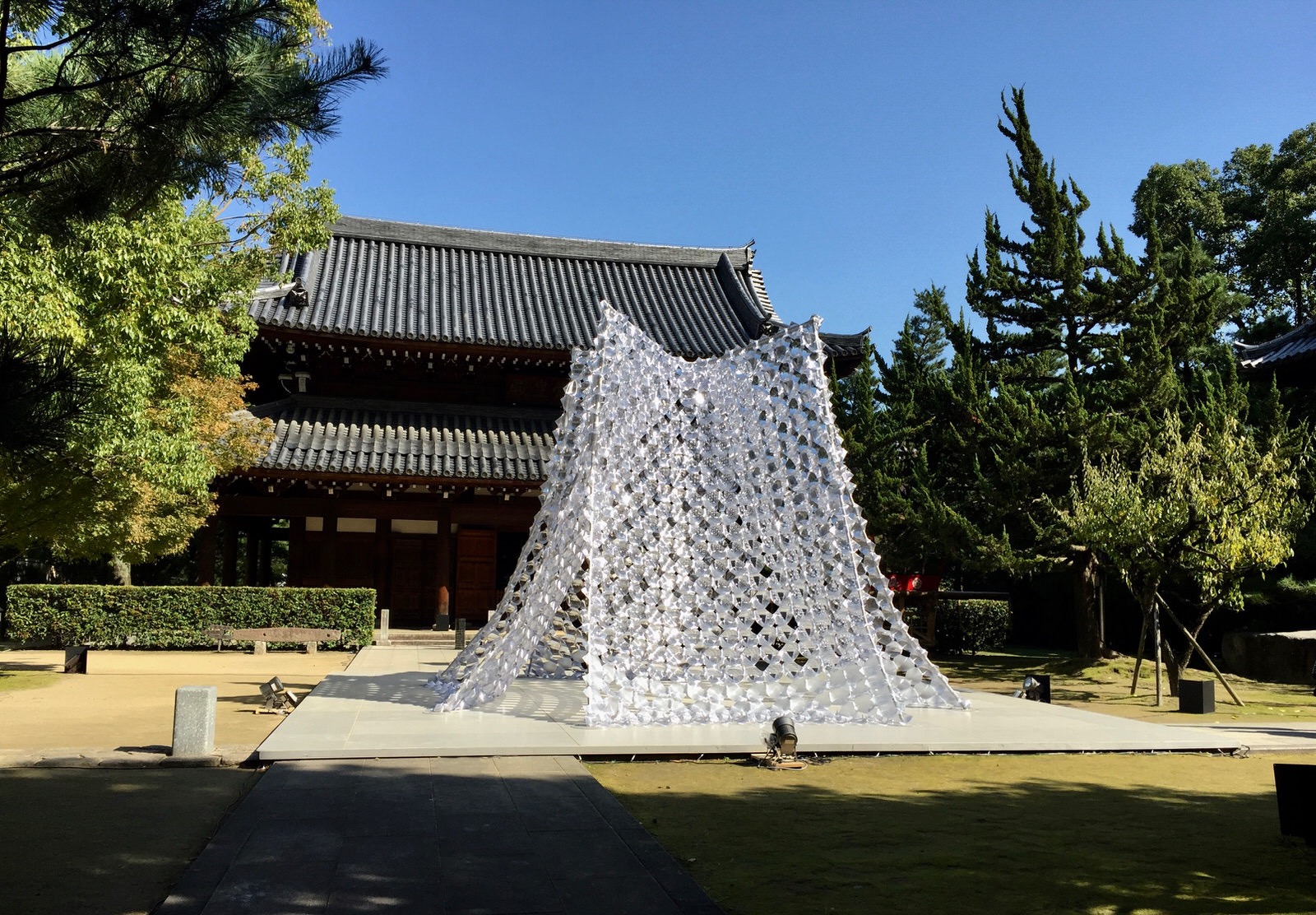 Q&A: Suzann Victor on paving her way as a female Singaporean artist in the 1980s

Culture
Q&A: Suzann Victor on paving her way as a female Singaporean artist in the 1980s
Share this article
Next article

One of the highlights at this year’s Singapore Night Festival was a pavilion-like structure in Raffles City Shopping Mall made up of a unique soft architecture of transparent lenses distinctively assembled, transforming the way the audience views and experience the surrounding environment. Called A Thousand Skies, the structure was an artwork by internationally-acclaimed artist Suzann Victor.

The Singapore-born artist is one of the city’s lauded talents, known for her compelling public artworks and installations that respond to context, space and architecture with distinctive forms and ideas. Victor has represented Singapore at the 49th Venice Biennale, 6th Havana Biennale and 2nd Asia-Pacific Triennial, and was nominated for the prestigious New York-based Civitella Ranieri Foundation Fellowship (2009) and the coveted artist residency at the STPI (2014). Her artworks can be found at high profile locations such as the World Square Sydney and the National Museum of Singapore.

Yet, things haven’t always been smooth-sailing for the strong-spirited artist. She moved to Australia in the late 1990s, after a controversy with 5th Passage Artists, an initiative that she co-founded to provide a community-based platform for emerging artists in Singapore.

“5th Passage Artists was really a point in my practice where I begin a line of inquiry to question the way art is produced, displayed, presented, collected. The kind of artwork the institutions and galleries were promoting,” she said.

While 5th Passage eventually started by promoting a broad spectrum of art, from contemporary art to design and mural-sized photography, the focus eventually shifted towards issues of gender and identity, which was important especially during the era she first started her practice.

We caught up with Victor before her flight back to Australia, and she tells us about the challenges she faced as a female Singaporean artist in the 1980s, and her thoughts on modern feminism.

What as the inspiration behind A Thousand Skies?

A Thousand Skies was first commissioned by the Fukuoka Asian Art Museum in 2017. I took on this very special residency and was invited to create a Southeast Asian artist response to the city of Fukuoka. For this installation, I used a magical material: magnifying lenses.

The work is comprised of about 1600 to 1800 lenses that were assembled together. The sculpture can take any form, from a dome-shape to a contemporary shrine, which was what I did for the Singapore Night Festival.

The sculpture intercepts and interrupts the spectacle of the shopping experience in Raffles City. When you go close to the magnifying glass, it multiplies everything that is in its surroundings. It turns it upside down and fragments it. In Japan, where it was conceived originally, the installation was outdoors — so it repeated the beautiful skies more than a thousand times. That’s how it got its name.

What were the disadvantages you faced when you first started your practice in 1988?

A main disadvantage is the lack of infrastructure for the arts at that time, especially in terms of funding.

But in my opinion, that was also an advantage in itself, because art was fairly unregulated. Artists and students, all of us from Lasalle, were able to seed new ideas relatively easier. It takes personal initiative. For an artist to develop a new concept or idea in a public space now, the idea has to go through rounds of approval. There’s a lot of bureaucracy compared to those days. I would cite that as one of the differences working in the early 90s and what you might experience now.

As a female artist in the 1980s, did you feel like you were at a disadvantage purely because of your gender?

Yes. In the industry, there’s an unconscious bias within the institutions. The default reference is always towards the male artist. Whether we’re thinking about the intuition of the social process or art making, even just mingling – the visibility was given towards the male artist. Maybe it’s not in an overtly intentional way. But there was an unconscious bias towards that at that time.

What advantage do you feel you have over the male artist?

I think the advantages are perhaps inherent in being female and a woman. While it may sound stereotypical, statistically, women are more intuitive and nurturing. We are naturally geared towards engaging with people. So if your project is one that is community-based, that is an advantage; to relate and connect with people.

I would believe it’s a lot harder in 1988. How do you think those now have it easier?

The artists now have access to huge amounts of funding. There are all sorts of grants, subdivided to cater to many different needs and requirements. The schools are much more structured and the standard of qualification is better. So the basic support system is there. I wouldn’t say they have it easier, but artists these days have more access.

Who were the female figures you looked up to?

I really admire the women who created the Changi quilts when they were interned in Changi Prison during the Japanese occupation in Singapore. They sewed secret messages onto quilts to communicate with their loved ones and husbands in other camps. What they created were the most profound handmade objects to be made by women in a politically-confined space in Singapore.

It’s such an ingenious and loving way, showing how creative women can be.

And they did that without violence, too.

Who is your favourite female artist of all time?

Australian-based artist Fiona Foley. She works with materials, concept and visual language so eloquently. She is also very conscious of aboriginal rights in Australia. To me, she represents a female artist with so much humanity in her, not just in a self-interested way, but who also addresses one’s topics. In her case, that is bringing visibility to aboriginal artists and their rights.

What is feminism to you?

I think feminism has become its own undoing. It really is any form of response that exposes and resists discrimination based on one’s gender. But it doesn’t create a disadvantage in itself. Feminism provokes thinking, but not in a militant kind of way. The latter, to me, is one step forward and three steps backwards.

Do you think the topics echoing the internet now (#metoo for example) are a misrepresentation of what feminism should be?

I think that the #metoo movement is a brilliant movement. It brought what women have tolerated for so long to the forefront. However, the way it was used indiscriminately, or how it has been abused, has created a backlash. I think that its motivation was a good one and its about time that took place. But especially with the advent of social media, it’s hard to control what happens to it.

I think people do have to take responsibility for what they say and what they do, but unfortunately, I don’t think people think their actions through. It’s just exploited to an extent that it is creating its own backlash. Hopefully, it gets back on track.

What are the difference between feminist issues then and now?

Because people are educated about it, they’re more conscious about being politically correct. It becomes more sinister and insidious because the way that one is discriminated against becomes more obscured. You have to be really switched on to be able to detect it.

How can art relay the message more effectively?

To be an influential artist, you have to provoke thinking and questioning. The way that art is used to relay the message of feminism, it has to be carefully thought through to subtly address the issue to create change and growth. It shouldn’t feel like you’re slamming it down the audience’s throat. Never underestimate the intelligence of your audience.

Interview Artist Suzann Victor Singapore Night Festival
Dewi Nurjuwita
Senior Writer
Dewi Nurjuwita is a travel and design writer who can be found exploring the streets of foreign cities with passport in one hand and a cup of coffee in the other.
Travel Architecture Interior Design