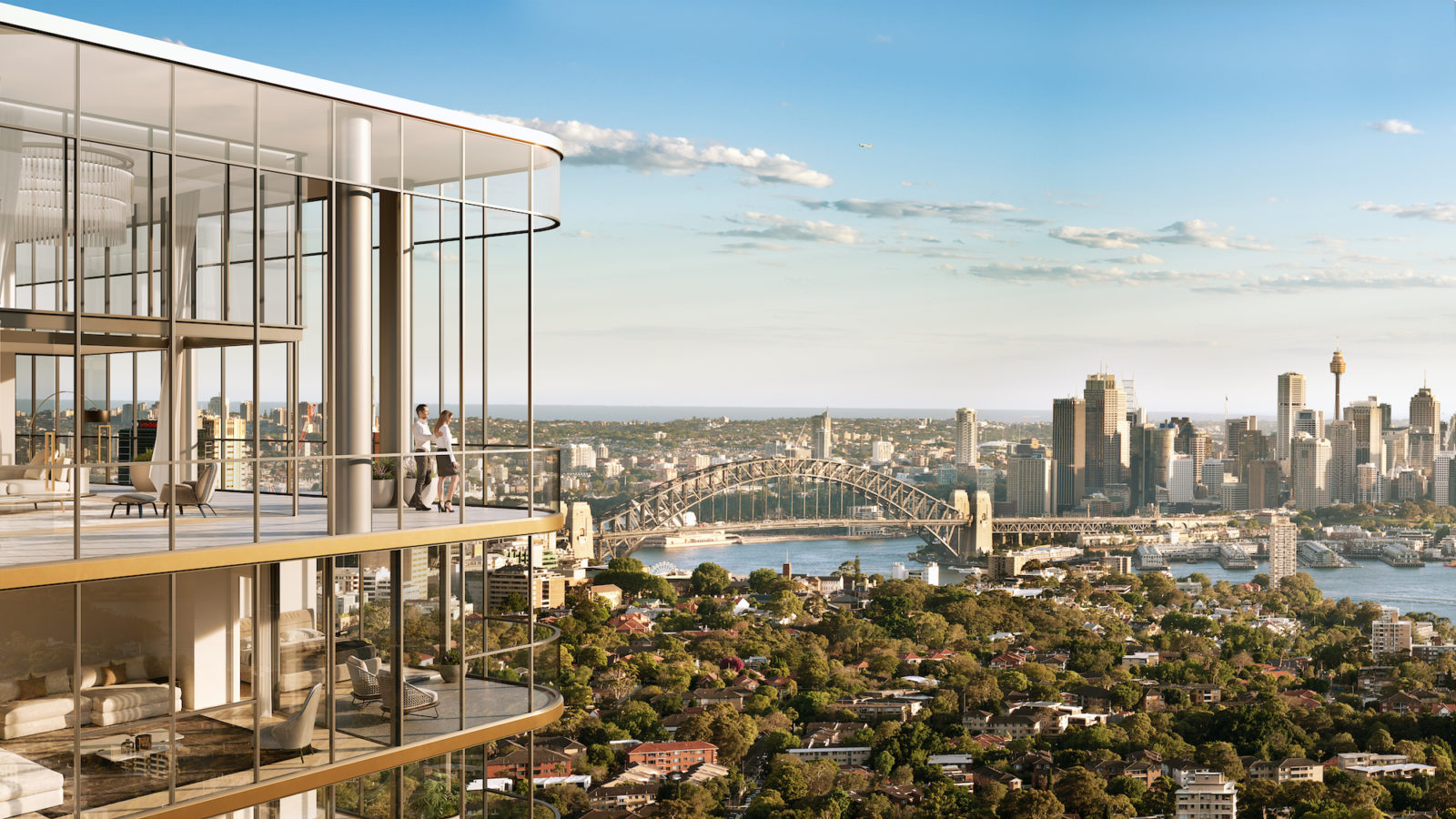 Sydney isn’t short of landmarks — the Opera House, Bondi Beach, and Darling Harbour are but a few of many — but there’s going to be a new, glitzy kid on the block.

Located on 88 Christie Street at St Leonards, on North Shore (the northern suburbs of Sydney adjoining Sydney Harbour) is 88 by JQZ, a new luxury residential project that looks set to change the way people experience the city, most notably via the four two-storey penthouses that top this three-tower urban transformation precinct. Perched on a ridge, these penthouses will offer the highest elevation of any residences on the north shore. If panoramic views are your thing, expect to see the likes of Sydney’s CBD, the Sydney Harbour Bridge, and Sydney Harbour from the comfort of your own home. It is, however, what’s inside that’s truly special. Designed by Angus Henderson from award-winning architectural design firm Henderson & Co. — who also led projects like the futuristic Sydney AMG showroom, the contemporary Australian Sailing Headquarters, and the Gatsby-inspired bar, The Cat’s Meow — the penthouses’ interiors offer modern-day living at its finest.

They were, after all, inspired by “the unparalleled views future penthouse owners will enjoy,” according to Henderson. “They really will own the sky. In fact, there’s not a higher point of living, from an altitude perspective, on the north shore until you reach the Gold Coast in Queensland,” he adds. With that in mind, he crafted the space to best capture the environment. Luxury living is epitomised with plenty of creature comforts that riddle the four-bedroom properties, so expect double-sided fireplaces between dining and living rooms, home cinema rooms, and large balconies to come as standard for both the 279sqm and 318sqm options.

The land that surround the building is interpreted via curved forms within the residence, as well as the muted colour and textures you’ll find throughout. The interior’s soft, glowing light and floor-to-ceiling windows lend airiness to the space, while the sea is paid homage to via the use of precious metals and finishes that create sparkling reflections.

“Given this unique building can be seen as a lighthouse on the ridge watching over Sydney and its beautiful surrounds, we considered how we could shape something that is truly an object of designer luxury from a finishings perspective,” said Henderson.

Leading Sydney-based property developer JQZ has also equipped each penthouse with a home automation system that brings lighting, audio and visual, security services and window furnishings together seamlessly — a feature that should please most millennials. Residents who venture out of their sanctuary will find a whole list of amenities within 88 by JQZ, including a rooftop recreation deck where the expansive recreation deck, swimming pool and clubhouse are located.

Prices for the ultra-contemporary penthouses will start from just over S$10 million.

Interior Design Architecture Property
Shatricia Nair
Shatricia Nair is a motoring, watches, and wellness writer who is perpetually knee-deep in the world of V8s, tourbillons, and the latest fitness trends. She is fuelled by peanut butter and three cups of coffee a day.
Motoring Wellness Watches