Home > Culture > Property & Architecture > Hassell, the architecture firm behind some of Singapore’s leading restaurants and bars

Hassell, the architecture firm behind some of Singapore’s leading restaurants and bars

Extravagant, larger-than-life interiors that look like something out of The Great Gatsby or Crazy Rich Asians have recently become a recurring design trend for restaurants and bars in Singapore. Think grand chandeliers, one-of-a-kind custom art fixtures, and splashy chrome finishes from the swinging ’60s and ’70s.

Take, for instance, the Atlas Bar at Parkview Square (more famously known as the Gotham Building), which has been the talk of the town mainly because of its Art Deco-inspired design. With its gilded gold accents, beautifully restored frescos, graphic etchings and touches of black-and-white, the gin bar is a portal to the roaring twenties. While unique, its interiors are reminiscent of yet another award-winning bar located on the second level of Regent Singapore — Manhattan Bar.

Hassell
The similar design nucleus can be attributed to the fact that these spaces were both dreamt up by the same geniuses from Hassell, a leading multidisciplinary design practice responsible for some of the most breathtaking spaces in Singapore — including The Great Room Offices, Luke’s Oyster Bar and Chophouse, and The Regent’s Tea Lounge. Established in Australia in 1938, the firm has now expanded globally and has spread across 10 studios around the world, namely in Australia, China, South East Asia, United Kingdom, and the United States of America.

Perhaps much of the firm’s success in Singapore’s hospitality design sector was strengthened by its merger with Distillery in 2015. Founded in 2008 by Paul Semple and Matthew Shang, the latter was a Singapore-based design studio with a reputation as a trailblazer in Singapore’s luxury hospitality scene — changing the face of some of the Lion City’s most exciting and defining venues in the last decade.

Helmed by both Semple and Shang, Distillery was responsible for some of Singapore’s most stylish venues, including Wild Honey in Scotts Square and the Manhattan Bar.

Since the merger in 2015, Semple and Shang have lent their signature style into Hassell’s projects. The latest ones include two spaces in Regent Singapore; namely Dolcetto by Basilico and Tea Lounge, both sitting on opposite ends of the grand atrium. The two venues were designed to complement the hotel’s iconic form and architecture, taking into consideration existing features like its panelling, ceiling details, and floor tiles. 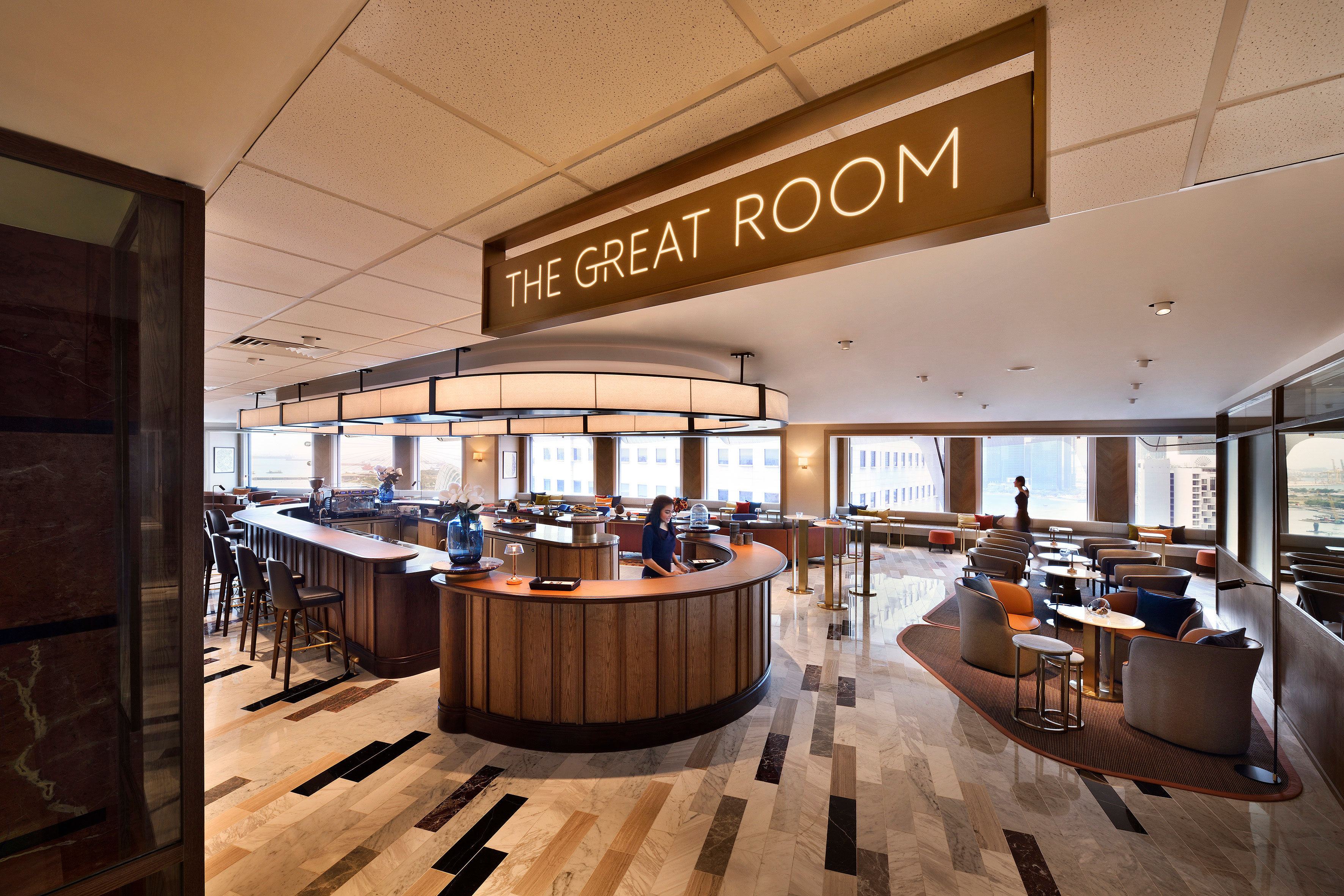 Tea Lounge at Regent Singapore
“It’s about having a very clear, defined story behind an existing space,” Semple shared when we met him over tea at the stunning Tea Lounge at Regent Singapore, the latest F&B project from the multidisciplinary firm. “So we explored the idea of the winter gardens in classic European hotels, and decided on a balcony experience to really introduce the tropical aspect.”

Indeed, we caught glimpses of the surrounding tropical greenery through the perimeter shutters flanking the restaurant — a homage to the colonial veranda. The focus, however, is the space inside. The interiors of the restaurant feature a touch of dark ebonised timber accented with golden brass, set against earthy tones of terracotta and dark green. Seating comes in the form of colonial wicker lounge chairs which complement the mid-century bamboo screens upholstered with tropical prints.

“The design language references tropical furniture in an old black and white house,” Semple explained as he showed us around the space. “We have chosen soft mossy greens and earthy tones to complement the floral prints. It’s a very modern colonial aesthetic.”

Far from just an ordinary tea lounge, the multi-functional space serves up gourmet pastries and authentic Italian coffee, tasty gelato and mouth-watering paninis throughout the day before transforming into a more sophisticated setting for a traditional Aperitivo Hour in the evening.

“The challenge is always about how to create something that is practical and workable but is also visually engaging when it’s not being used to display food or drinks,” he pointed at the island counter (used to display the buffet spread during lunch service) in the centre of the space which doubles as a sculptural piece when not in use.

Other projects
Upstairs, you’ll find the world-renowned Manhattan Bar. Reminiscing the classic American cocktail bar, the space evokes the ‘golden age’ of cocktail making. The interiors of Manhattan Bar are moody and sophisticated — with its main seating area featuring Chesterfield sofas, luxurious velvet armchairs, rich plum drapery, as well as bespoke marble and mahogany tables and bar counters. Under the watch of both Semple and Shang, the bar was honoured at the 2015 Asia Hotel Design Awards.

“Manhattan is behind closed doors and takes you to a different world,” Semple continued. “It’s a little bit disconnected from the other parts of the hotel in that regard, yet sits comfortably within this whole volume. It’s always that balance in hotel rooms, the degree of connection and disconnection that you create when designing these spaces.”

Indeed, it has proven to be successful. Its classy interiors, along with its impressive cocktail menu, has landed the bar a spot amongst the world’s top 50 bars.

So we were curious, what was the inspiration for Atlas?

“It started with a very simple principle. It was inspired by grand hotel lobby bars in Europe; because that was the nature of the environment we were in,” Semple reminisced with a proud smile. “We started to create a beverage menu and planned around that. We then responded to that and it became a gin bar storing the biggest gin collection in the world.” 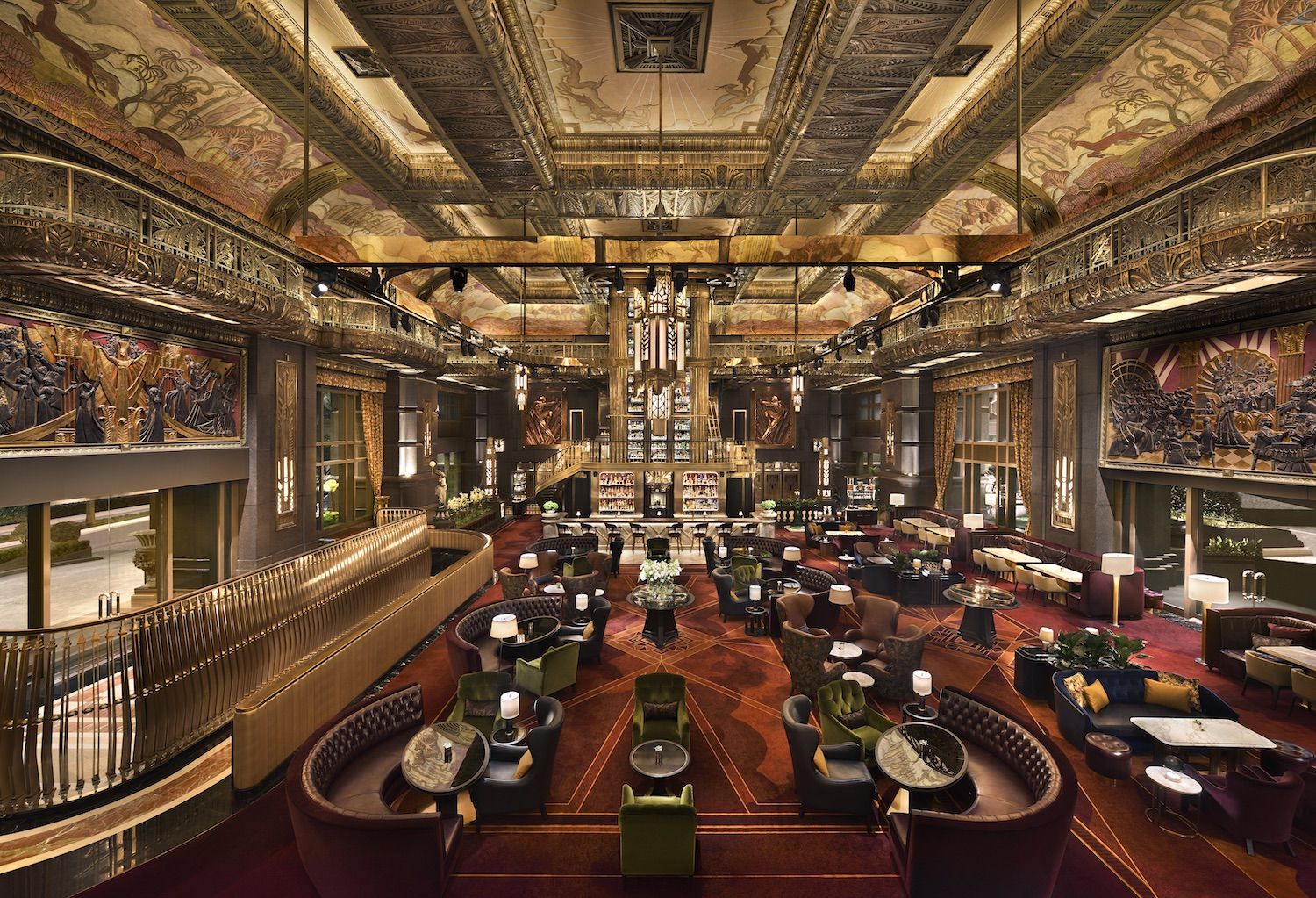 Trends in F&B design
“Restaurants are becoming more responsive to the way people live, which is more relaxed,” Semple revealed when we asked him about the upcoming trends in the restaurant and bar category. “I think people are more willing to use all sorts of different spaces in ways that they won’t necessarily use traditionally. Operators now have the ability to be flexible to what the audience wants — so the idea of taking over a cafe or restaurant for a group breakfast meeting (for instance) is possible.”

The restaurant seating layout is a huge factor in restaurant design, we were told. It sets the tone for guests’ to dine in; evident from the privacy of the cosy nook we were sitting in.

“Understanding what people do in a space helps design. It’s important to comprehend what the customer experience is going to be and what kind of people are coming in here, and what are they here for,” he explained. “In Tea Lounge, we placed long tables and two-seaters. Whether you’re having a one-on-one business meeting or a big group coming in for high tea or a bridal shower, each occasion calls for a different seating layout.”

What’s next for Hassell?
Manhattan, Atlas Bar, and the Tea Lounge won’t be the last of Hassell’s projects to grace the Lion City. “We’ve got a really strong long-term relationship with Proof & Co, as we’ve worked with them for Manhattan Bar and Atlas,” Semple hinted. “We’re currently collaborating on two other projects with them at the moment.”

For now, his lips are sealed. However, he reveals that one of the projects will be based in Singapore and is slated to be completed at the end of the year — so we’ll just have to wait patiently.