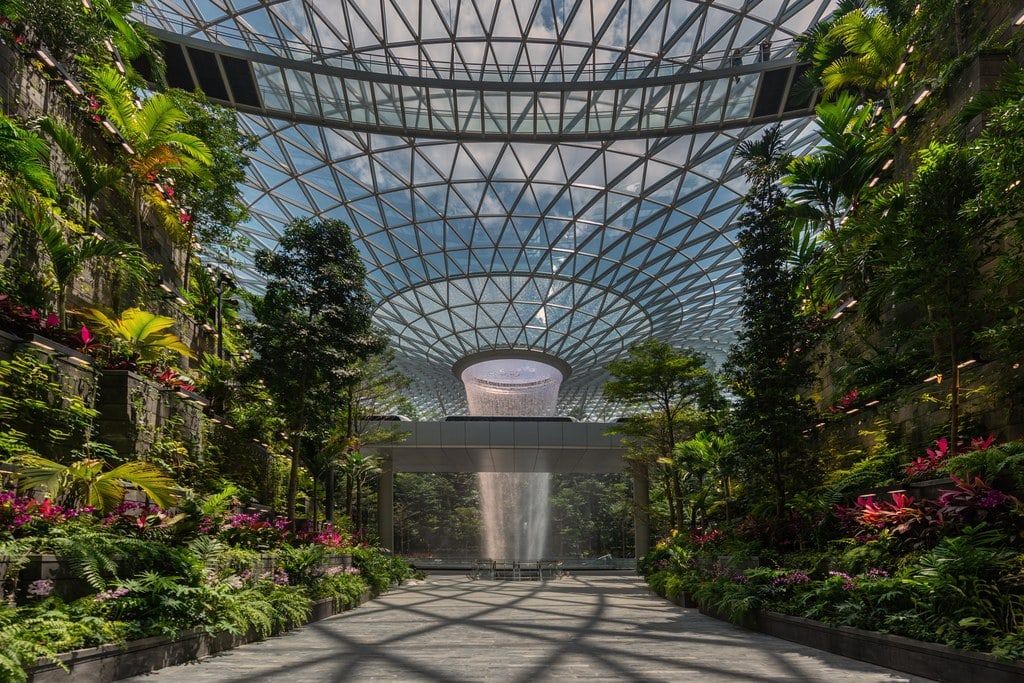 The new Jewel at Changi Airport is Singapore’s newest obsession. Just open the Instagram app, and you’ll probably see a boomerang (or two) of its most prominent installation, a 40-meter-tall indoor waterfall, or photos of the snaking queues at its dining establishments.

While a major draw of Jewel is its 112 F&B outlets ranging from the triple-concept Shang Social to the popular Shake Shack, it still makes its mark on the world map as Southeast Asia’s latest architectural wonder. Since its official opening on 17 April 2019, it has attracted visitors — both locals and tourists — by droves.

A fact not many people may know is that Jewel was dreamt up by the same architect behind the revolutionary Marina Bay Sands.

Who is Moshe Safdie?

The brains behind both architectural marvels? Multi-award-winning architect Moshe Safdie. The Israeli-Canadian architect emerged on the international architectural circuit as a student in 1976 with his Habitat 67 housing complex, built for the Montreal World’s Fair. Little did he know that the project would mark the beginning of his prolific career.

Since then, Safdie has designed various unique cultural, civic, and educational buildings around the world. His architectural style includes the use of bold shapes contrasted against integrated green spaces in large-scale urban projects.

“Architecture is designing and constructing our living environment,” Safdie said in an interview with Architectural Digest during the World Architecture Festival (WAF) in 2015. “It is conceiving first, and realising second, where we live, our cities, our buildings, our houses.”

This is apparent in his design for Jewel, in which he has built a whole ecosystem in the heart of Singapore’s Changi Airport. It houses a market place on one side, and a nature reserve just adjacent to it. The inspiration for Singapore’s new lifestyle destination is the lush gardens around the island. In fact, Safdie mentioned that he took notes right out of ancient scriptures and literature.

Enclosed in the 1,460,660-square-foot (135,700-square-meter) glass toroidal building is over 235,000 square feet (21,832 square meters) of landscaping. This includes a five-story garden (called Forest Valley), made up of more than 200 plant species, with walking trails — all of which is flanked by a steel dome made up of more than 9,300 glass panels. On its fifth level, you will find a 150,695-square-foot Canopy Park; which includes a suspended bridge, mazes, slides, an animal topiary, and mist gardens. Its Canopy Bridge, suspended 23 metres above the ground, features a glass bottom at the centre for a gripping vantage point.

Lastly, the heart of Jewel, an epic 131-foot-tall (40-meter-tall) Rain Vortex. Lauded as the world’s tallest indoor waterfall, it falls seven stories from the roof’s oculus. The feature recirculates rain water to cool the indoor environment and for reuse, in addition to the aesthetics of seven stories of water dropping in a cylindrical shape from the sky.

If it all seems rather familiar, it is. The Rain Vortex echoes something else Safdie has previously designed, a two-storey high rain oculus in Marina Bay Sands. A collaboration between artist and sculptor Ned Khan and Safdie, the rain collector also functions as a skylight feature. The collected rainwater, which emerges from the side nozzles, is sent in a downward vortex, filling a canal that runs through the atrium.

The Marina Bay Sands has become such an integral part of the Singapore skyline that it is hard to believe it was only constructed less than a decade ago. Characterised by three 55-storey towers connected by the Sands SkyPark, the monumental building is a unique skyscraper that makes up a facet of the city’s skyline.

“It’s all about rethinking and proposing a new kind of public realm, which is the contrary to the dominant typology of cluster of towers sitting over a mall, turning its back to the rest of the city,” Safdie said in an interview with Dezeen, “Then we had the dilemma of where are we going to put the swimming pool? How do we make this a resort? That’s when the idea of the Sky Park was born. It’s on the 57th floor, it’s 2.5 acres cantilevering 65 metres off the tower with all these gardens and it’s proven to be magical. It’s really put us on the map in Asia.”

While the project has indeed, revolutionised the Singapore skyline, Safdie’s work for Marina Bay Sands is far from complete. Early this year, plans were revealed that Safdie Architects (along with two other global architectural firms Aedas and Gensler) is set to add a fourth tower to Marina Bay Sands resort. The new stand-alone tower will contain more hotel rooms, taking cues from the existing glass buildings, which were completed in 2011. The new development is part of a S$9 billion expansion by MBS and Resorts World Sentosa, which will include a new entertainment district. This will be home to a state of the art 15,000-seat music arena, meeting rooms, ballrooms and exhibition halls.

In terms of how the new building would sit in the current Singapore skyline, Safdie has revealed that the new tower will consist of two curvilinear planes wrapping around each other, with a multi-level SkyPark at the top. Once completed, the new tower will offer 1,000 luxury hotel rooms in Singapore’s CBD.

“The ensemble of the new tower and arena should be, in my opinion, harmonious with the Marina Bay Sands complex, while at the same time, being iconic in its own right,” Safdie said in an interview with The Straits Times.

For now, the details of when the tower will be constructed is yet to be released. But we doubt that this will be his last project in the Lion City. After all, it’s safe to say that Singapore’s skyline will not be what it is without Safdie’s creative genius. He has undoubtedly changed the face of Singapore’s skyline.