Home > Culture > The Arts > 5 unconventional artists you need to know 5 unconventional artists you need to know

In 1968, Japanese artist Yayoi Kusama met with a group of friends at the iconic Alice in Wonderland statue in New York’s Central Park. The mood was upbeat and cheerful, and it looked almost like any regular gathering — until her friends started stripping off their clothes and letting her paint polka dots all over their nude bodies.

To casual onlookers, such a sight might have been rather bizarre. But this was nothing unusual to Kusama. She had staged several similar performances in the Big Apple before, as well as in Germany and Belgium, and referred to them as “Happenings”. Unsurprisingly, the New York police were well-acquainted with her by this point.

Kusama’s eccentricities, however, made her even more prominent in the art scene. Her popularity grew after those public performances, and up till today, she’s renowned for her quirky art and love for polka dots. She isn’t the only artist known for her unconventional style — other personalities the likes of English artist Damien Hirst have also made their mark on the art scene with their unusual (and sometimes weird) creations. Hirst, for instance, shocked visitors at his 2012 Tate Modern show with his installation A Thousand Years, which featured a decomposing cow’s head covered in flies and maggots.

Of course, art doesn’t always have to be morbid. Random International specialises in fusing art with science and technology, while Guy Laramée carves jaw-droppingly beautiful landscapes into books. Here are 5 unconventional artists to watch, if you adore anything that’s out of the ordinary. 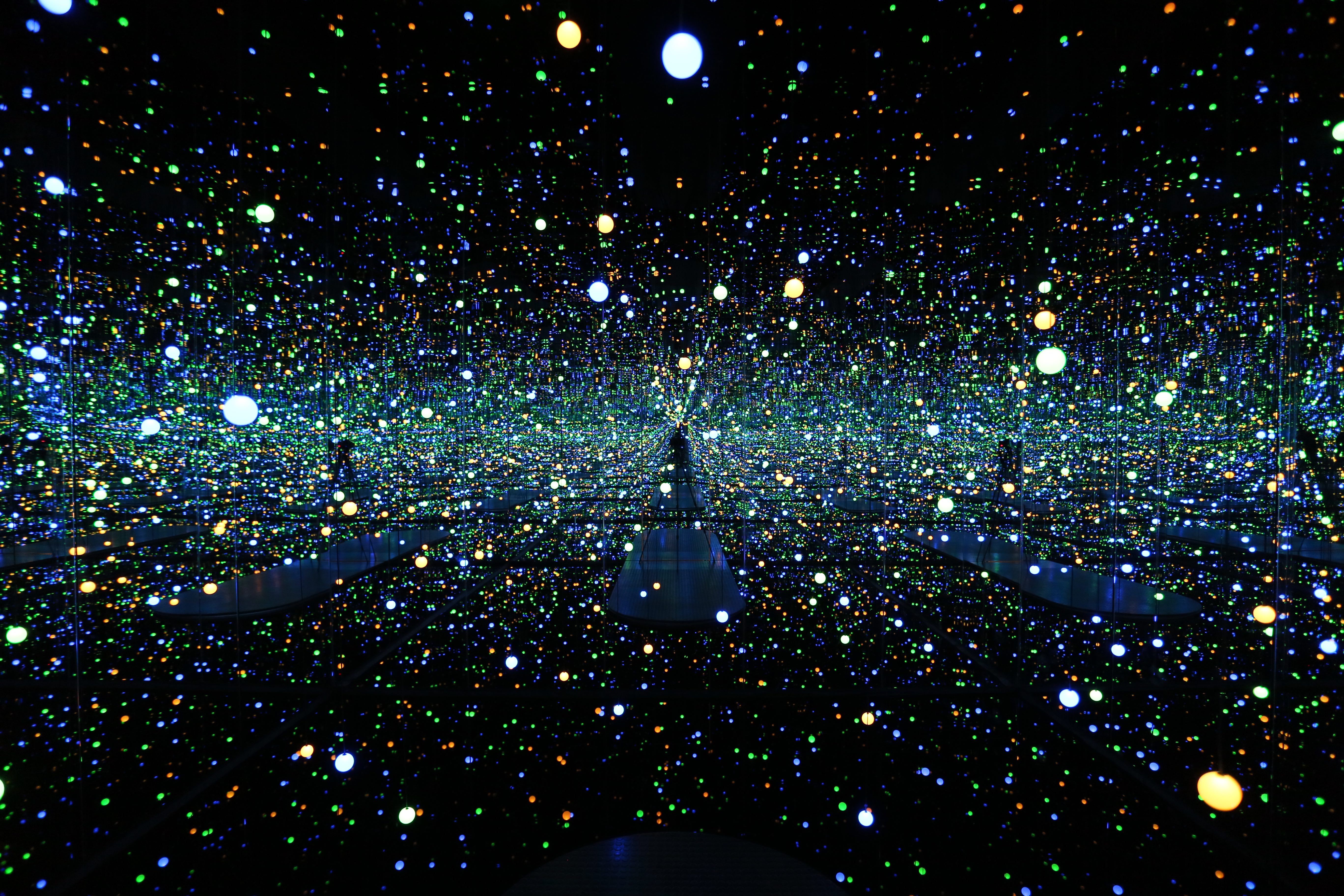 Her infamous “Happenings” of the ’60s may have sparked controversy, but Japanese artist Yayoi Kusama remains a beloved household name till today. Dubbed the “High Priestess of Polka Dots”, she’s best known for her use of polka dots, which have decorated everything from paintings to Louis Vuitton bags and her famous Infinity Rooms — which are constructed with mirrors and lights to conjure a sense of wonder. Her retrospective exhibition, Life is the Heart of a Rainbow, officially launches at National Gallery Singapore today, and showcases over 120 of her creations.

Despite the vibrant colours and quirky pumpkin motifs that dominate her work, there’s actually a rather dark backstory behind Kusama’s artistic inclinations. Born and raised in Matsumoto, Nagano, she had an abusive mother and philandering father, and struggled with hallucinations throughout her childhood. She turned to art as a form of release, and in 1977, checked herself into a psychiatric hospital, where she still lives in an open ward today at the age of 88. 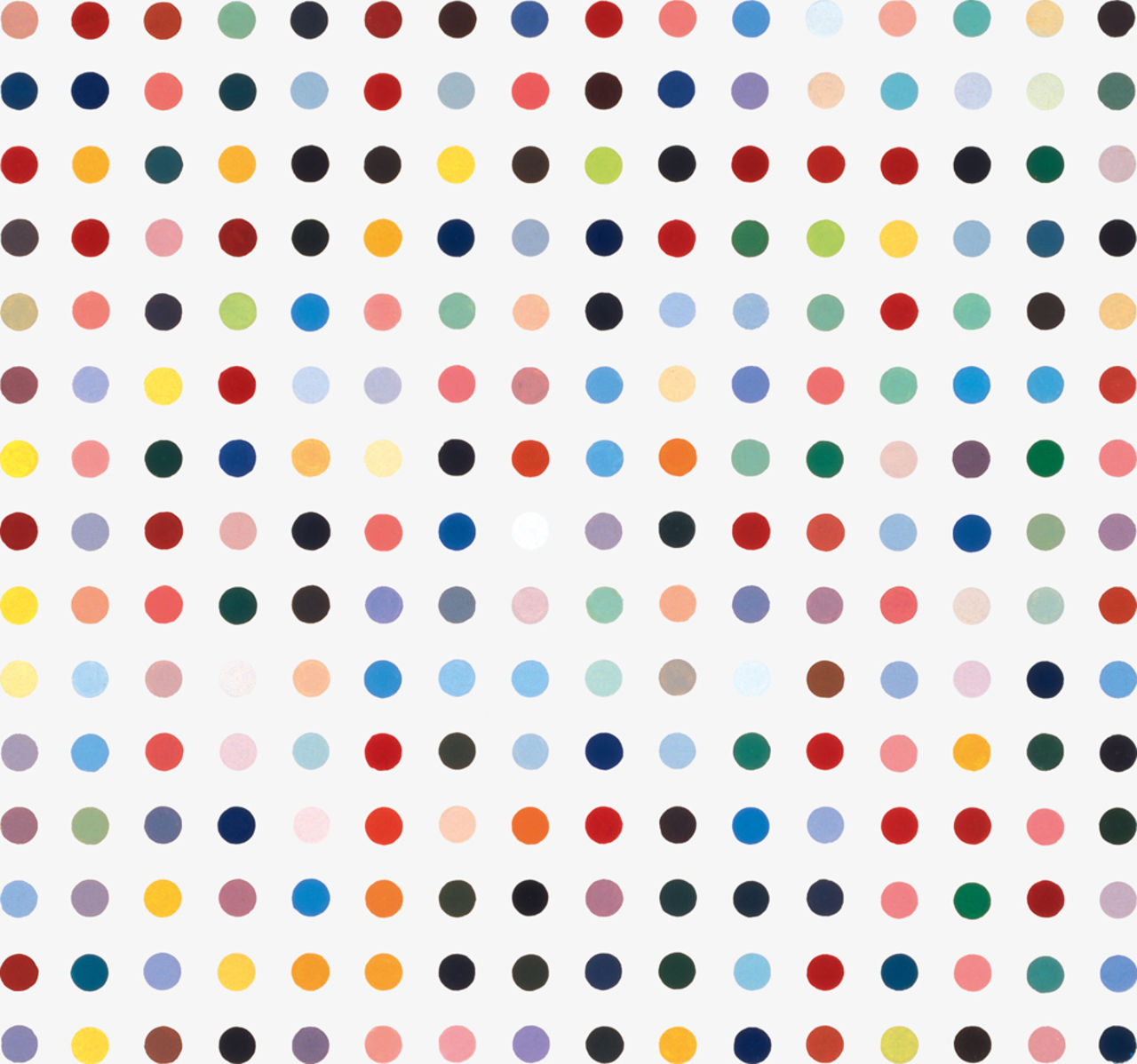 Damien Hirst is by no means an unknown name in the art world. Touted as an enfant terrible of the contemporary art scene, he is notorious for using disturbing elements such as dead animals preserved in formaldehyde, in his work. And then there are his colourful spot paintings, which aren’t as gruesome but have also drawn brickbats, as they aren’t actually produced by him — Hirst employs a team of assistants to make them.

His polka dotted works have drawn comparisons to Yayoi Kusama’s signature style, but the latter remains diplomatic about this in interviews, and has even praised his talent. She did, however, make a comment in a 2012 interview with The Guardian that seemed like a subtle dig: “I think that if someone tries to sell their work at a high price, that is the wrong way of doing it…I have done all the work myself, not assistants.” 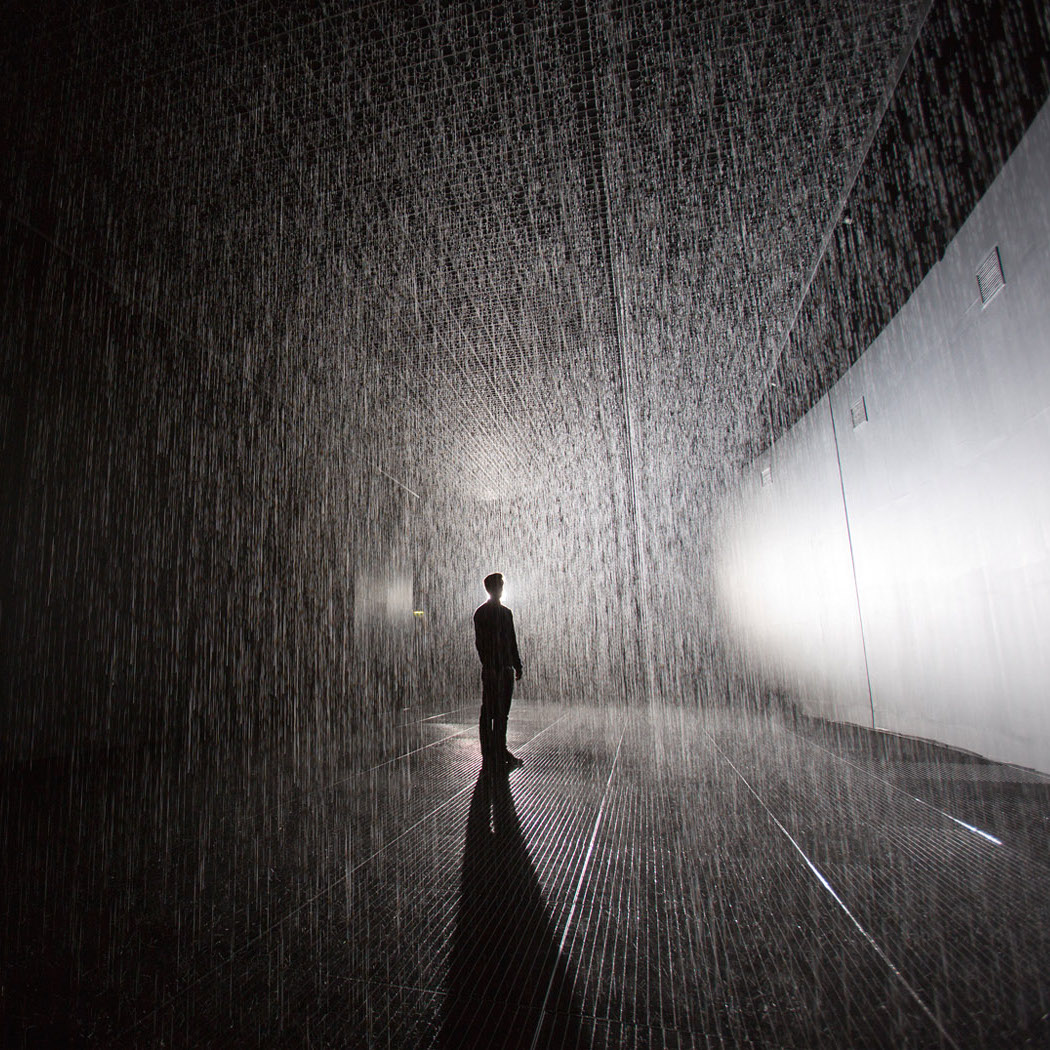 Founded in 2005, Random International is a London-based collaborative studio that focuses on experimental contemporary art that explores “behaviour, reaction and intuition in relation to natural phenomena and the human form”. Among its whimsical creations is its 2012 Rain Room, an interactive light and sound installation that produces a downpour. Through the use of 3D tracking cameras and sensors, the rain is programmed to only fall around visitors as they explore the space — so they never get drenched.

Other noteworthy works by Random International include “Swarm Study (Glass)”, its latest installation featuring LED lights embedded within glass sheets. The lights are designed to behave as if they are independent living organisms, and move about at random. 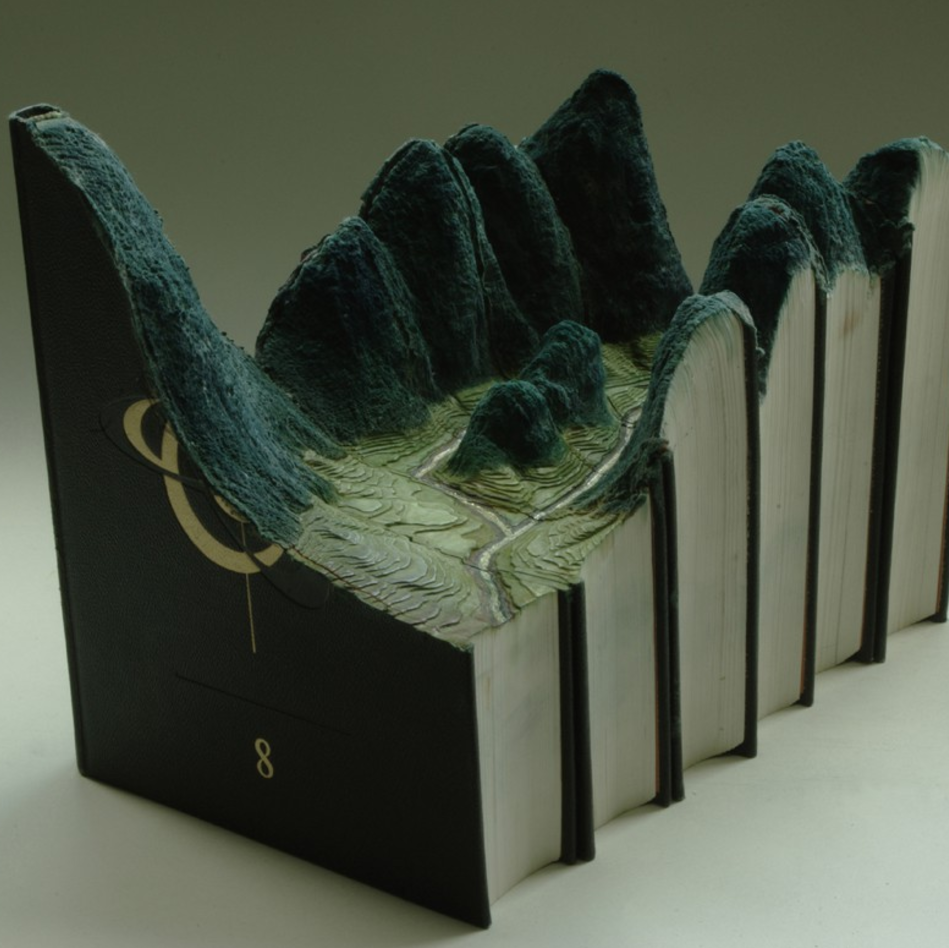 Many people read books to escape the mundanity of reality, or, in the case of non-fiction tomes and textbooks, to gain knowledge of certain topics. Montreal-based interdisciplinary artist Guy Laramée, however, uses books to literally carve out whole new landscapes, mountains and caves. He does this by sandblasting shapes into old dictionaries and encyclopaedias, and applying inks, paints, beeswax and even crayons to add colour and dimension to his masterpieces. Some of these book sculptures are modelled after famous landmarks such as the Great Wall of China and the ancient city of Petra.

A jack of all trades, Laramée has tried his hand at a variety of art forms including theatre writing and directing, contemporary music composition, musical instrument design and building, singing and literature. 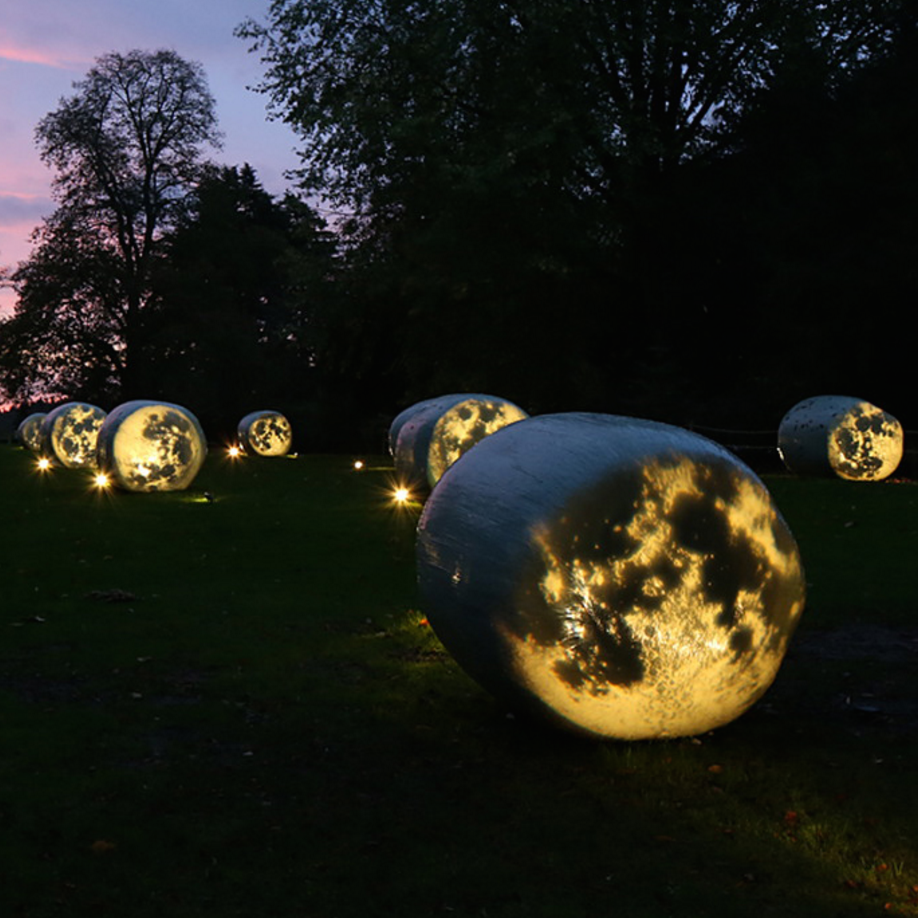 Famed for his stunning large-scale light installations, British artist Bruce Munro’s luminous, site-specific works can be found across the UK, US and Australia. Highlights (pun intended) from his repertoire include Moon Harvest (pictured), which comprises 20 bales of hay illuminated by strategically placed lights. The light casts intriguing shadows upon the bales’ surface, calling to mind images of the moon. This installation was displayed at Aviary Glade at Waddesdon Manor in 2014.

Equally beautiful is Field of Light, which Munro has recreated for several locations including Edinburgh, Houston and — most recently — the Nicholas Conservatory and Gardens in Illinois, US. This work showcases many glowing stalks of glass and acrylic buds, which are lit up by light sources within.