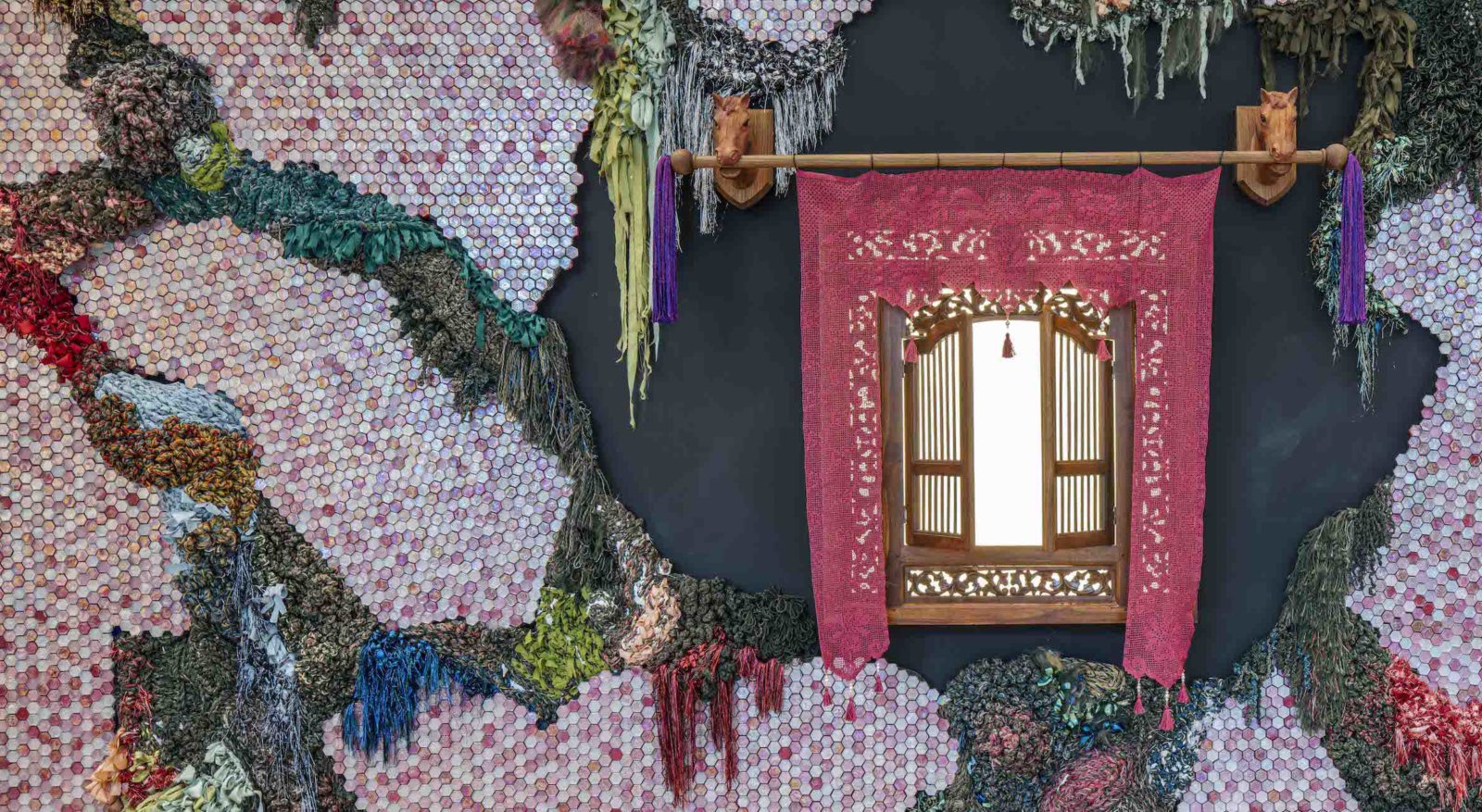 It’s easy to think of a Gucci boutique as a candy store for grown-ups.

Walk into one and you’re treated to colourful confections in all forms (think bags, clothing, shoes and jewellery, because a maximalist should never be forced to choose); you’ll be teased with an assortment of rich textures (feathers, sequins, exotic leathers) that you just want to touch.

At the Gucci flagship at Marina Bay Sands, newly refreshed for the brand’s 100th anniversary, those sensorial delights will be found not just in the products designed by Alessandro Michele, but in a five-metre-long wall art display by Kelly Limerick.

You may also like…
Culture
Tufting is the new craft craze — here are the best tools and workshops to make your own rugs
Style
Gucci x Balenciaga: 6 collectible pieces from the biggest collaboration of 2021

The self-taught crochet artist is known for her eclecticism, which applies as much to her style as her textile artworks. (On the day of the Gucci MBS store re-opening, for example, Kelly’s face was framed by a pink crocheted face mask and braids with glittering yarns.) In other words, she fits right into the Gucci universe, which is why the Italian fashion brand commissioned her to create its first in-store art wall display in the region.

The artwork, like the rest of the store, captures a clash of ideas: man-made versus natural, modern versus traditional, spontaneity versus precision. Creative impulse is what informs most of Kelly’s artwork, which took three weeks to make, but the lace curtain at the centre required discipline for her to stitch its intricate GG monogram by hand. And there is, in fact, more to be discovered  beyond the veil.

Below, Kelly Limerick takes us through the knitty-gritty details of her colourful masterpiece.

What inspired your artwork for Gucci?

I really loved the last scene for the Gucci Aria video — the part where the girl pushes open the doors, and a sliver of light cuts through. She then walks into a terrestrial paradise, surrounded by plants, gambolling animals and people just being free. I wanted to recreate, more than the visual of it, the emotion of transcending into nature from the manmade — represented by the dark room in the video.

In my artwork, I have used tiles to represent the manmade world. The wooden window in the centre emanating ‘daylight’ symbolises an exit — or ‘entrance’ depending on how you look at it — into the other world. The crocheted plant forms in my work are creeping through the tiles, showing the strength of Mother Nature as she embraces the manmade. Lastly, I have included a sparkly lace curtain in front of the window to give it an air of mystery; a nod to some of the pieces in the Gucci Aria collection, which features sparkly material and lace.

Some of the textile surplus from the Gucci Aria collection also figures into your artwork. Can you tell me more about that?

I’ve worked with some waste materials as well as items destined for trash in my previous artworks, and it’s something I’m trying to explore. Not just for the sake of ’sustainability’, but also to give more character to my work. In this particular project, I requested for textile surplus from Gucci to include in the piece. It really gives the installation much more personality with the pops of colour, as well as varying textures — especially the sparkly fabric which is so recognisable and visually ties the work to the collection.

How did you feel about being asked to create this for Gucci?

Of course, I was extremely honoured, having been a fan of Gucci for a long time. I would say it is not just the fact that it’s a huge, globally-recognised brand that excites me; but it is also that I resonate with the ethos of the brand and love its boldness and aesthetic.

Also, I feel proud that crochet (or textile art) has reached this stage where it is featured in an art-wall in Gucci. I feel like it is a huge step forward for textile art in Singapore as it is not widely recognised as an art form (and sometimes still considered a ‘craft’), and I feel happy that I could be the artist given the chance to push this boundary.

Do you have a favourite look from the Gucci Aria collection?

Not one particular one, but I do love anything with feathers because of the movement it brings.

Finally, what do you love the most about the Gucci universe that Alessandro Michele has created?

I feel like it has blurred the boundaries between fashion and art, and has embraced so many different forms of expression, culture and people. This inclusion and recognition that we are all different but beautiful in our own way is one I truly appreciate.

The Gucci flagship store (#B1-109) is now open at The Shoppes at Marina Bay Sands.