Home > Culture > The Arts > How Bearbrick became one of the biggest icons, and how to start collecting 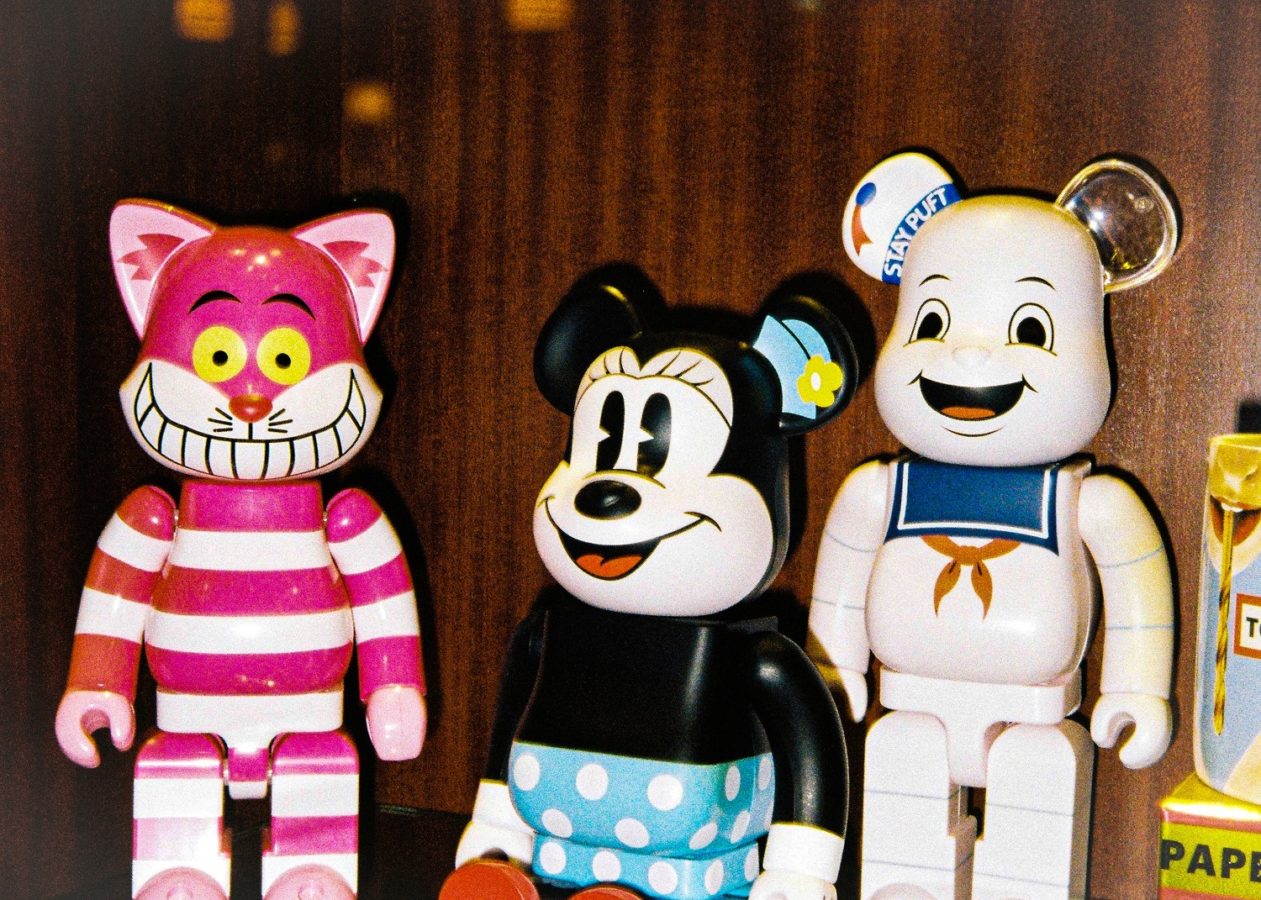 Culture
How Bearbrick became one of the biggest icons, and how to start collecting
Share this article
Next article

When collecting something becomes a rage, no matter how extraordinarily simple it may be, it becomes a cherished collectable in no time. The case of Bearbrick (stylised as Be@rbrick) is one such example.

In case you have never come across a cute looking, distinctive anthropomorphic bear figurine with a potbelly, below is what a Bearbrick looks like.

Today, the ‘bear’ is as much a major icon in fashion as it is in the world of art. An intelligent creation, it effortlessly blends the simplicity of a plastic toy with the aesthetic impressionability of modern art and dynamic luxury fashion.

Bearbrick is a unique vinyl toy, which has been one of the most fervently desired collectables since its release around 21 years ago. Although a simple plastic toy, some of the world’s biggest fashion houses and designers have adopted it to showcase their latest designs and projects.

Despite being moderately priced, the plastic bear-shaped figurine is immensely valuable to collectors. Moreover, some of these are sold for tens of thousands of dollars at auctions. This is why American musician Joe Hahn popularly dubbed it as an “adult collectible toy”.

The vinyl toys are nothing but simple plastic figurines and yet have disrupted the toy industry like nothing else.

Bearbrick was created by Tatsuhiko Akashi, who founded the Japanese company, Medicom Toy, in 1996. One of Medicom Toy’s earliest creations was Kubrick, a Lego-like humanoid figure named after the acclaimed filmmaker Stanley Kubrick.

Akashi created Bearbrick for the 2001 World Character Convention in Tokyo after organisers approached him to make a toy they could hand out as a gift to the attendees. However, the organisers requested hundreds of toys in a short time.

So, Akashi, encouraged by the fact that the teddy bears soft toy — those children have played with through decades — was celebrating its 100th anniversary in 2000, hit upon the idea of placing a bear’s head on the body of a Kubrick.

Thus, on 27 May, 2001, Medicom Toy launched Bearbrick, which is now less of a toy and more of a prized artefact.

In a 2017 interview, Akashi told Otaku Mode that he doesn’t conduct market research. Pointing at a Bearbrick, he said, “If I did, this wouldn’t have come out. There’s no way we would have put this out.”

Indeed, Bearbrick is so simple that its phenomenal popularity is confounding to most.

Which major names have had Bearbrick associations?

Upon its initial launch, Japan’s Medicom Toy joined hands with Tokyo’s record shop HMV to make a unique Bearbrick. That was the first collaboration.

Ever since, the company has been producing special editions of the toy, marking festivals such as Halloween and Christmas, as well as cartoon and comic characters like Winnie the Pooh, Avengers and Star Wars.

Designers such as Yue Minjun, Takashi Murakami, KAWS and Hebru Brantley, besides music groups like Daft Punk and Sandaime J Soul Brothers, have also had their own Bearbrick launches.

Why are they so exclusive?

No one can exactly point to what has made Bearbrick so wildly popular among design aficionados. But two factors that certainly contributed to its exclusivity are the uniqueness of its design and limited-edition figures.

A Bearbrick toy is like a blank slate on which anyone can draw anything. Imagine a video game where you can dress your favourite character in any way you like. Bearbrick is something like that.

The regular Bearbrick collectables can be a “basic” toy or a “standard” one. Bearbricks launched in this category are part of a set series designed to resemble a character pertaining to the horror genre or science fiction universe, a hero, an animal, a general pattern, a flag, or simply a cute-looking figurine.

On the other hand, the “secret” series consists of extremely rare Bearbrick themes. Above all, Bearbricks that are not meant for sale but for promotion are even rarer to find.

Such is the diversity in design that every Bearbrick edition is different from the other. Because of these reasons, Bearbrick has become something of a trophy that is desired by many but held by a few.

What are some of the most famous Bearbrick designs?

The Yue Minjun ‘Qiu Tu’ 1000% Bearbrick, which was released in 2008, is to this date the most expensive Bearbrick ever sold when it went under the hammer for GBP 126,000 at an auction a few years ago.

One of the most easily identifiable Bearbricks is the KAWS blue bear-shaped ‘Chomper’ edition, whose eyes have the distinctive ‘X’ mark of the artist.

The Parisian boutique Colette created a special Bearbrick for its 10th anniversary in 2007 — a simple white bear, featuring the signatures of 12 street artists, including Michael Lau and KAWS. 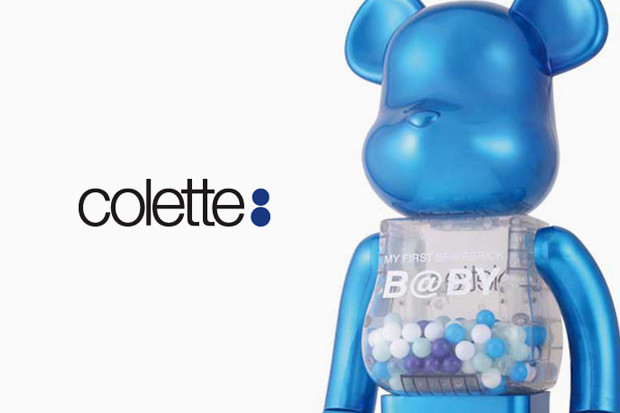 Colette was also involved in a limited-edition creation known as My First Bearbrick B@BY. Designed by Japanese actress Chiaki Kuriyama, the unique Bearbrick has a transparent belly filled with coloured beads. When shaken, it makes a rattling sound, which babies are particularly drawn to.

In 2009, Colette also sold Bearbricks labelled “White Crystal Christmas” for around US$14,000. These extremely rare collectables were embedded with Swarovski crystals.

Among the rarest Bearbricks is the one designed by Karl Lagerfeld in 2007. Only 1,000 pieces were made, and these were displayed in the luxury fashion label’s boutiques.

The Bearbrick was styled in Coco Chanel’s signature dress — a tweed suit complete with pearls. It was launched to benefit the Hong Kong Blood Cancer Foundation for the event known as ‘Love is Big, Love is Bearbrick’. One of these fetched approximately US$30,000 at a Christie’s auction in November 2019.

Recent releases include the Readymade x Mickey Mouse 1000% Bearbrick, which is, of course, Mickey Mouse as the collectible toy. A unique feature of the plastic figure is that it can be dressed in Ghillie suit, military wear that reflects on the Japanese company Readymade’s upcycled military surplus garments.

Among the recent releases is a special wooden Bearbrick, created by Medicom, in collaboration with iconic Japanese furniture maker Karimoku. Though Karimoku has previously launched Bearbricks with Medicom, it is the first time that they released a 1000% size Bearbrick.

How to start your own collection?

First thing, you must keep an eye out for are auctions. That is where the rarest of rare Bearbricks show up. However, a general collection can be started by simply buying from the official Bearbrick site.

Bearbricks are launched by SERIES and TYPES. Each SERIES has four TYPES. The current is SERIES 42. The official site lets you browse Bearbricks by year and size. You can select 2001 from the drop-down menu and take your pick out of the many that were released then.

The 2021 releases include quite a few special editions such as the textile sculptor themed Anne Valérie Dupond Bearbrick or the translucent Jimmy Choo one which is fitted with a light bulb inside.

There is also a Bearbrick dedicated to Lightning McQueen, the hero of the Disney animated feature film Cars.

Once a collection is started, there is every chance that it will continue, as more uniquely designed Bearbricks keep tumbling out of Medicom Toy and older ones become rarer figures.