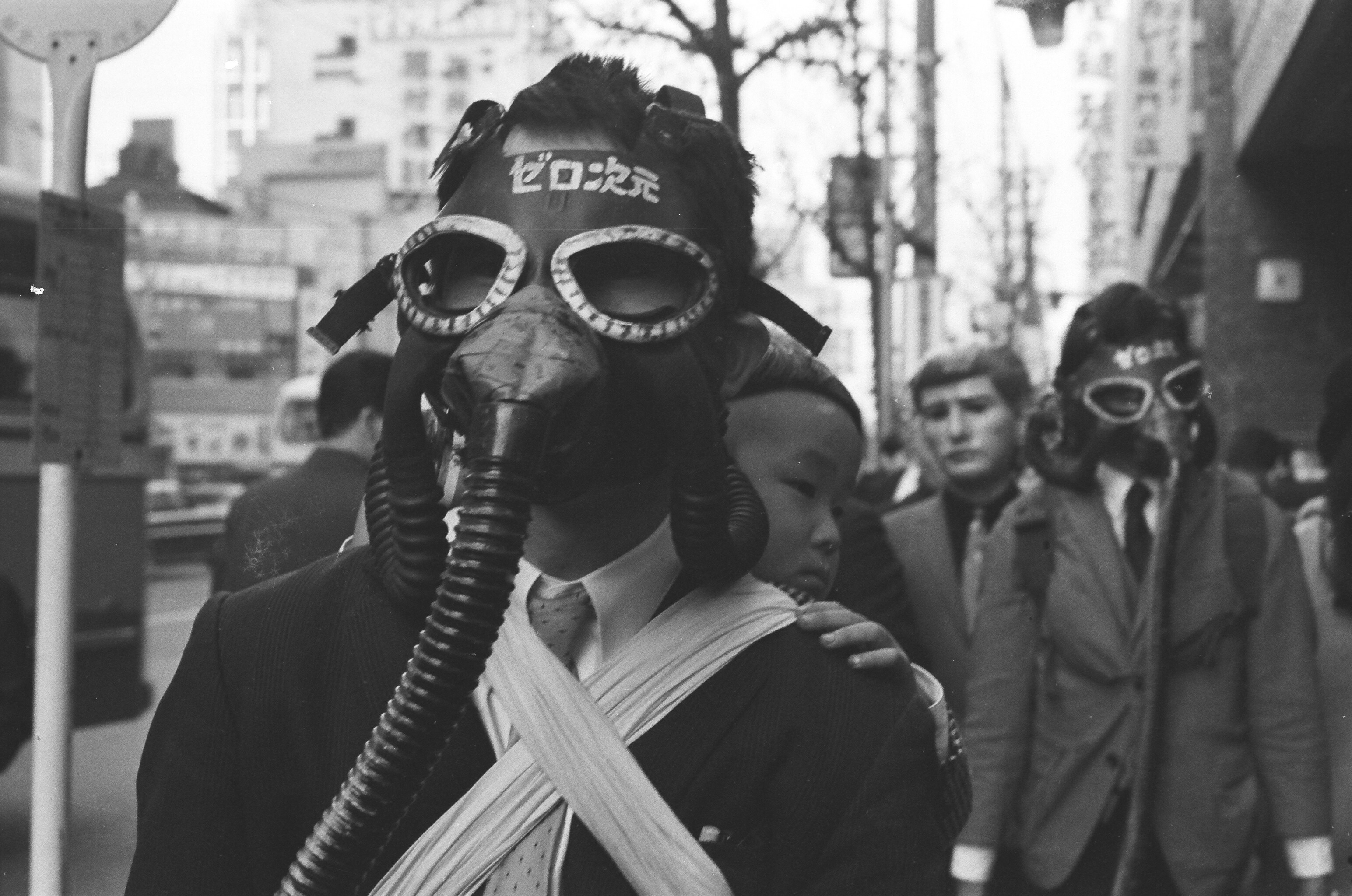 In recent weeks, Hong Kongers marched in protest against their government. Singaporeans braved the rain for the annual LGBT demonstration, Pink Dot. Just across the border, Malaysia is moving to decriminalise street protests.

There couldn’t be a more appropriate time for the National Gallery Singapore’s latest exhibition, Awakenings: Art in Society in Asia 1960s-1990s. The travelling exhibition is on its last leg and it is set to leave a lasting impression with a massive curation of artworks documenting a tumultuous period marked by social movements and activism.

More than 140 artworks were gathered from all over Asia, some reproductions of lost works or sourced from rare archives. The ambitious project that took a total of four years and three other museums — Museum of Modern Art Tokyo, Museum of Modern and Contemporary Art Korea and the Japan Foundation Asia Center — to put together.

Culture
State of Art: 5 exhibitions to see in July 2019

One shouldn’t expect less from an exhibition aiming to cover one of the most complicated moments in modern Asian history. Awakenings covers a poignant three decades which saw Asia facing rapid modernisation, rising nationalism and political differences. Countries sought independence and identity as they moved on from the harrowing moments of World War II.

It also proved to be a fruitful period for Asian artists. Creative minds and rebellious spirits work hand-in-hand to play devil’s advocate in criticising politics and highlighting on-going struggles of those marginalised from society. As a result, it has given birth to a rich scope of inventive art forms and movements. Artists and art groups worked with new technologies of the time or go beyond the lines of ‘common decency’ to create ground-breaking work.

Most of these works aren’t entirely relatable for those with a lack of context of each country’s politics and culture. Instead, the bravado of artists who continue the fight against ideologies and propaganda despite all obstacles is one that’s worth appreciating.

Now, when censorship is rampant and alternative voices are met with derision, the exhibition serves as a stark reminder of an outspoken past. Awakenings probably won’t inspire a sudden revolution amongst its audiences, but it does offer an assurance that offering a voice isn’t all that detrimental to society as it is made out to be. 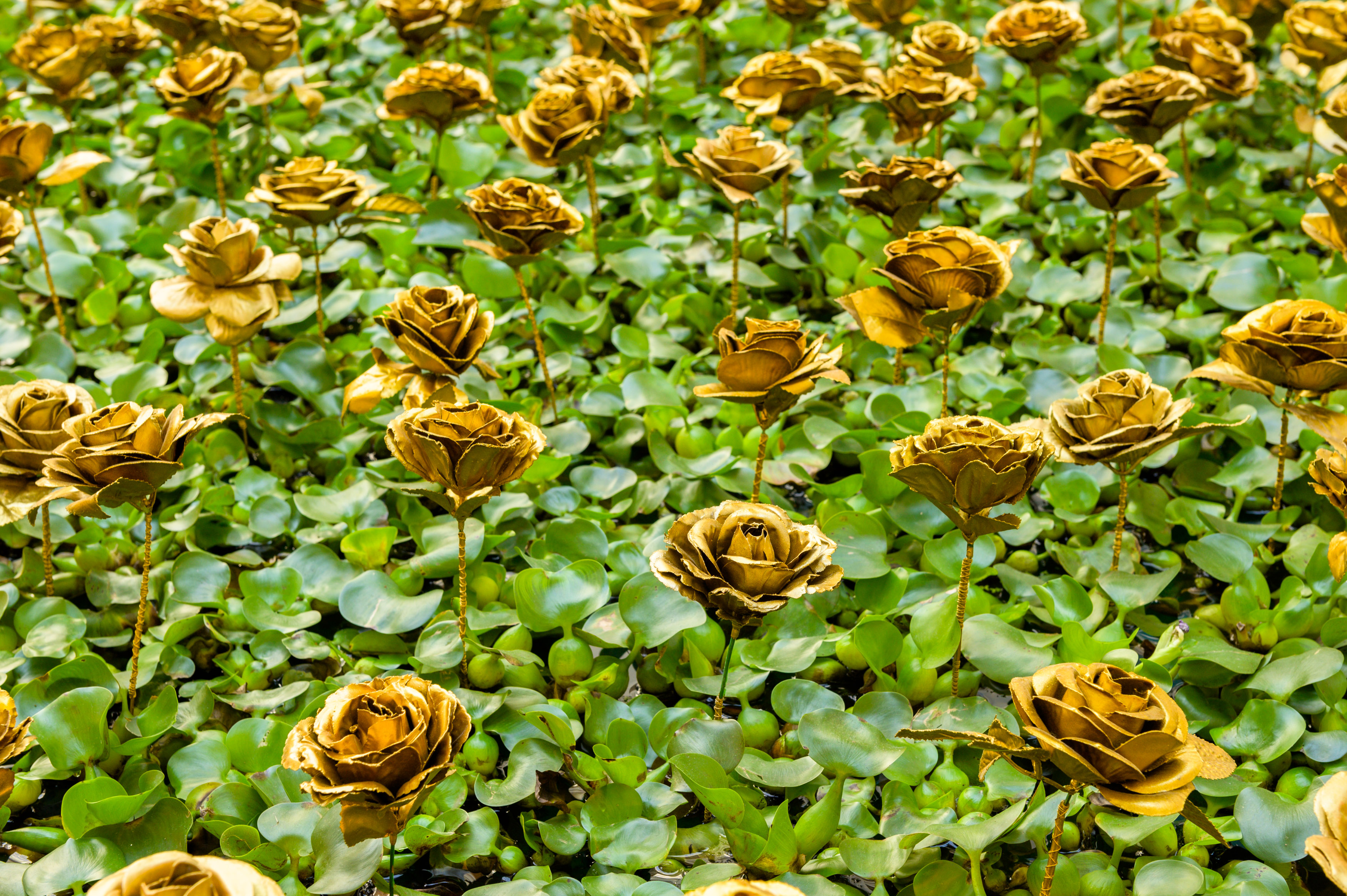 This pond of water hyacinths and gold plastic roses graces the entrance of the National Gallery Singapore for the duration of the exhibition. This idyllic-looking installation was the start of a movement in Indonesia, where artists shited away from traditional painting and sculpture for experimental mediums. The 1979 installation by Siti Adiyati served as a criticism of growing consumerism under Indonesia’s then-President Suharto’s New Order. In the artist’s words, “It is just an illusion symbolised by the golden rose in the sea of absolute poverty that the eceng gondok (water hyacinth) represents.” 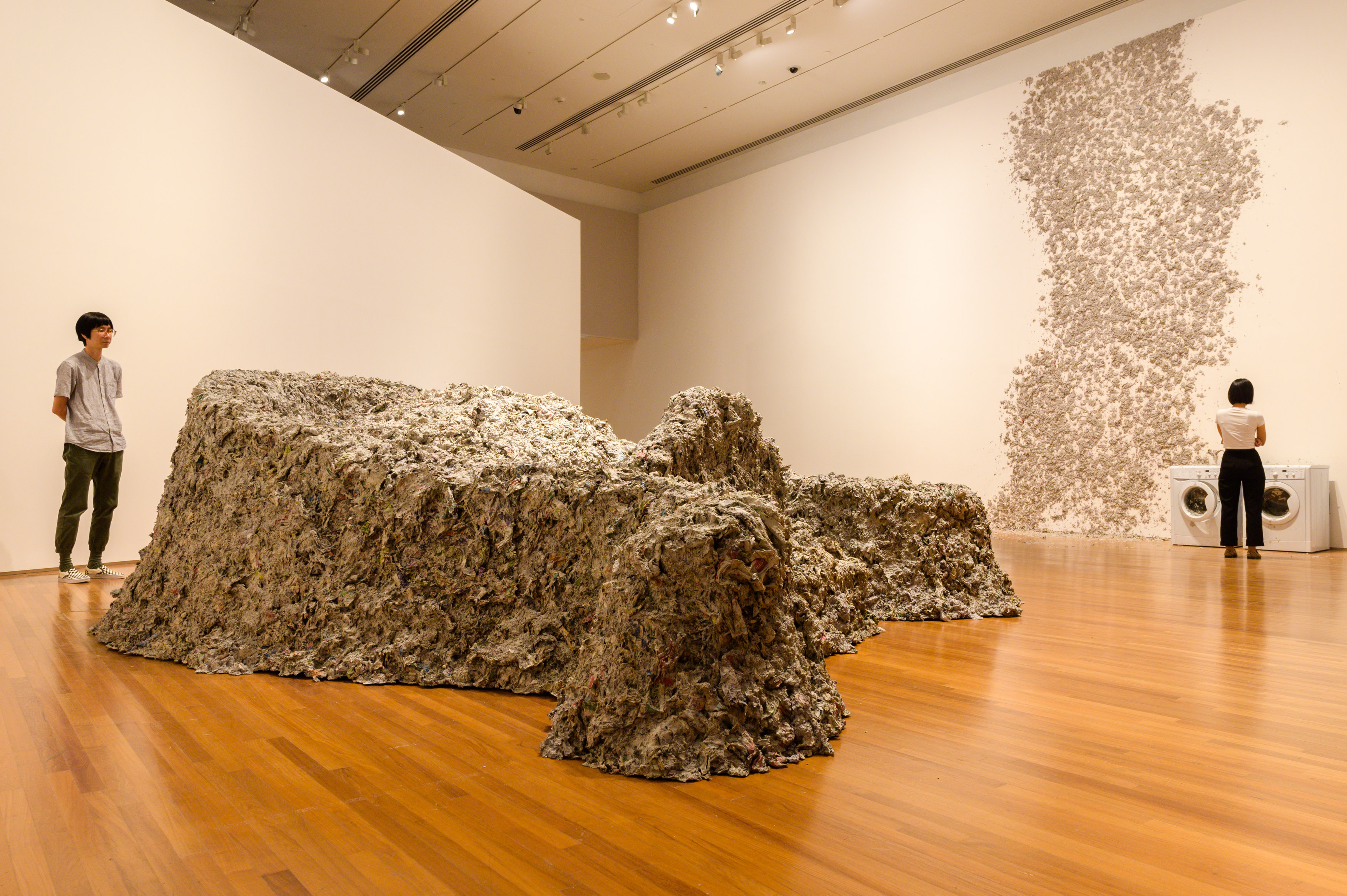 The Chinese-born French artist is no stranger to controversy. Huang Yong Ping made headlines after his infamous Theatre of the World installation featuring live animals was shut down last year for animal cruelty. This installation here, recreated in 2013, is not quite as radical but is no less provocative. Reptiles sees traditional Chinese tombs made out of paper pulp churned from running French newspapers in washing machines, reflecting the connections and conflict between the East and West. 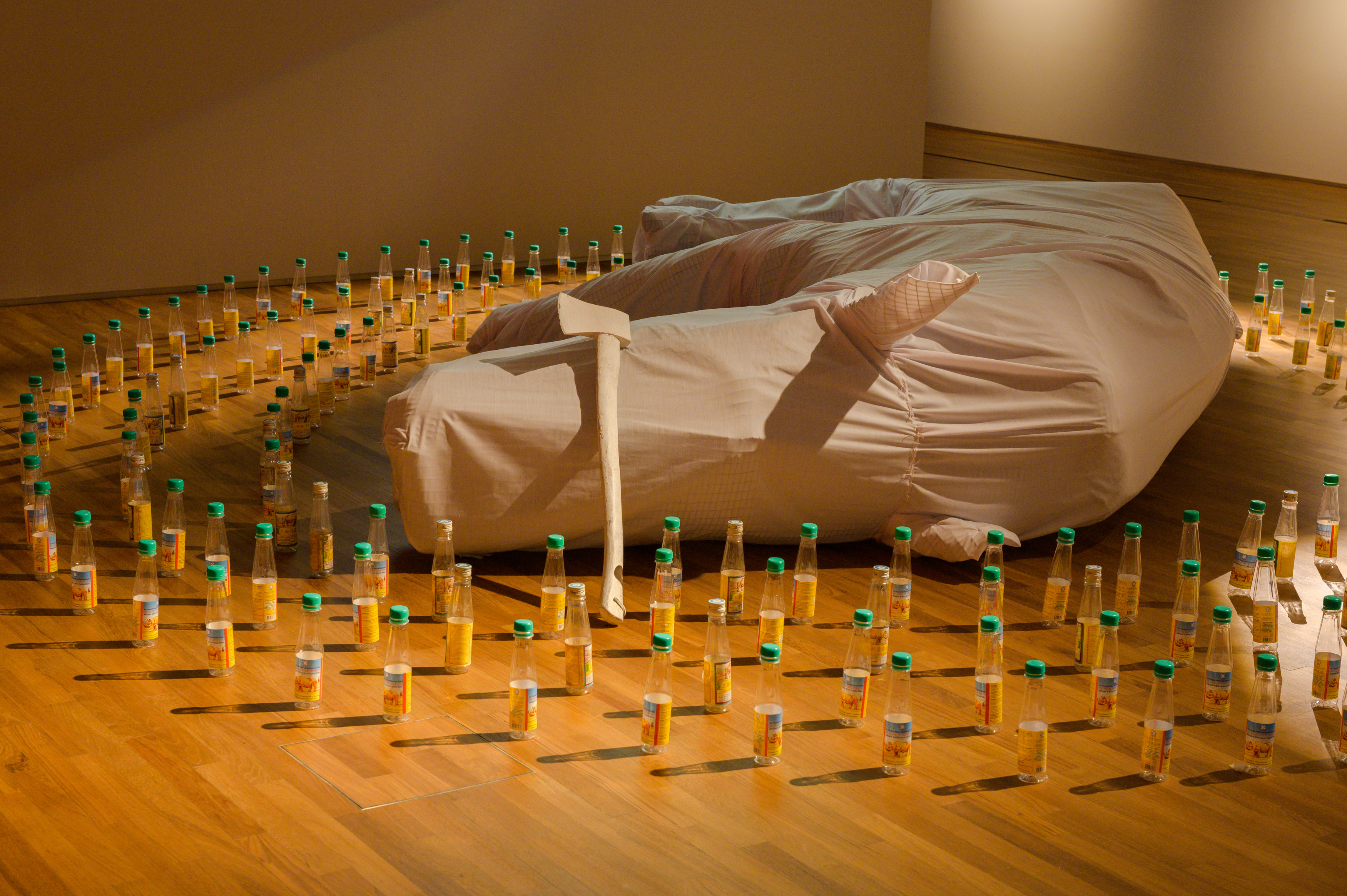 3
They Poach the Rhino, Chop Off His Horn and Make This Drink by Tang Da Wu

Singapore’s art pioneer Tang Da Wu staged this piece twice in 1989 at the former National Musuem Art Gallery and the Singapore Zoo. Tang uses this as a critique of the traditional belief on the ‘cooling’ medicinal properties of the rhinoceros horn. The installation sees the artist mourning a rhinoceros sculpture in linen and knocking away bottles of traditional Chinese ‘cooling water’ surrounding it. 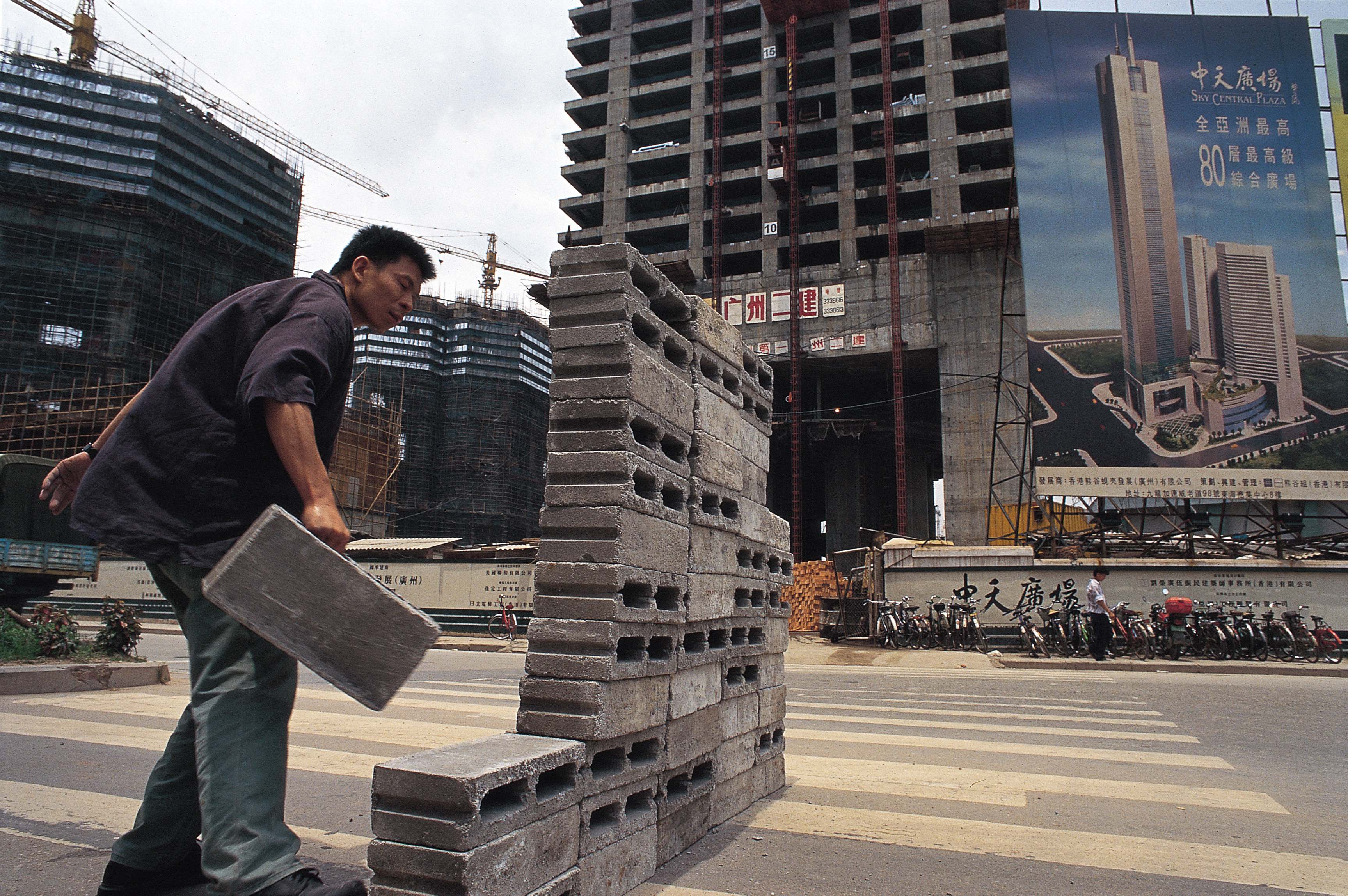 This site-specific performance saw Chinese artist Lin Yilin build and remove a wall of concrete blocks across a busy road in Guangzhou. In the process, Lin interrupted traffic in the city for 90 minutes. But more than just being a mere traffic nuisance, Lin hoped to highlight the rapid development in China as well as the relationship between urban environment and people. 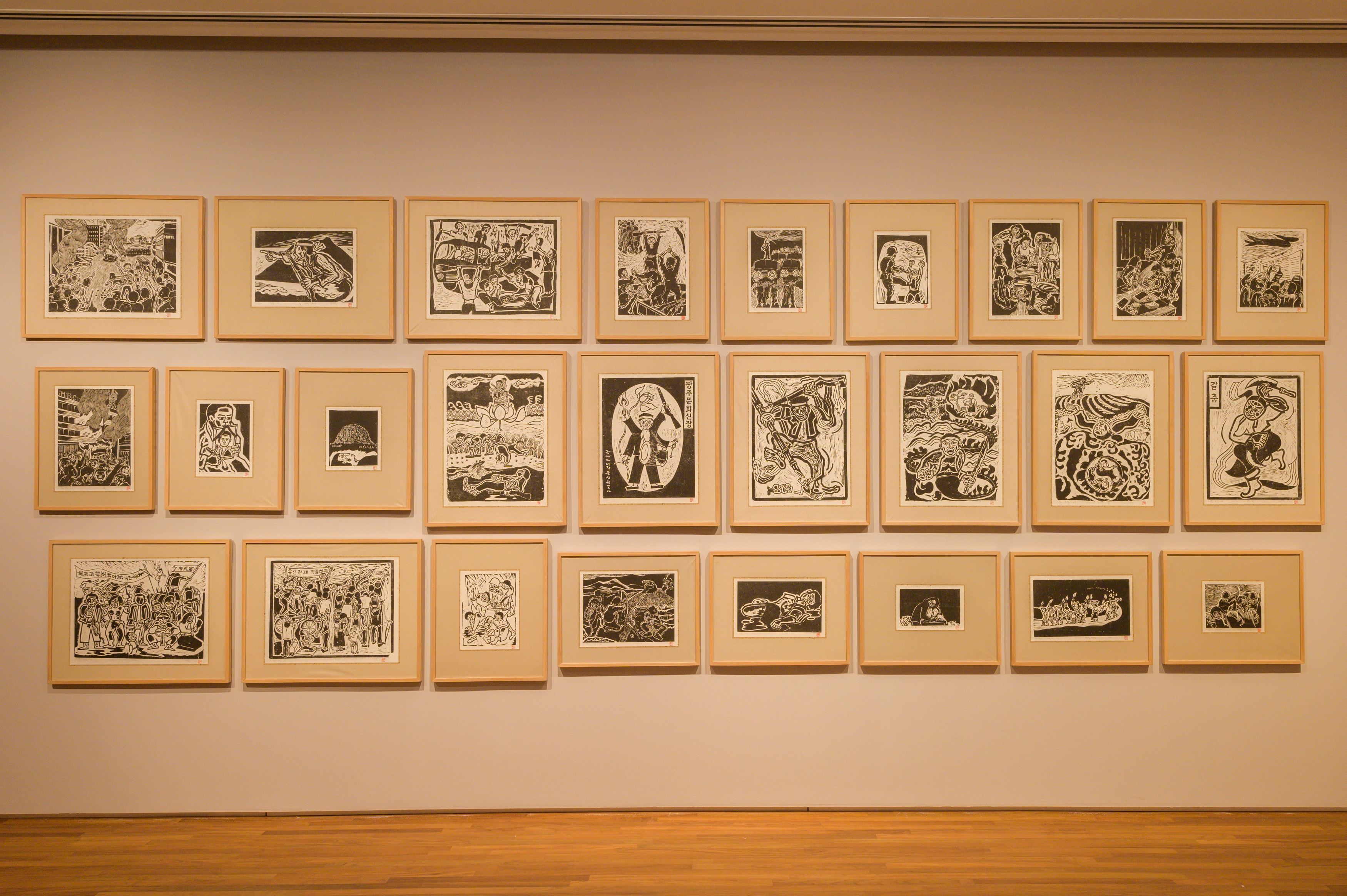 The 50-piece series depicts scenes of the tragic uprising from beginning to end: the early stages, the new military regime’s conspiracy and tyranny, the people’s resistance, the deportation of the martial army, and the final suppression of violence and bloodshed. It proved an effective way of gaining supporters against the government.

National Gallery of Singapore
Jasmine Tay
Senior Writer
Jasmine Tay is the dining, culture and jewellery writer. She makes fine silver jewellery and causes mini-explosions in the kitchen when she can't afford fancy dinners. Sometimes she tells people what she thinks about art, and binges on the music of Danzig when they don’t agree.
Dining Culture Jewellery