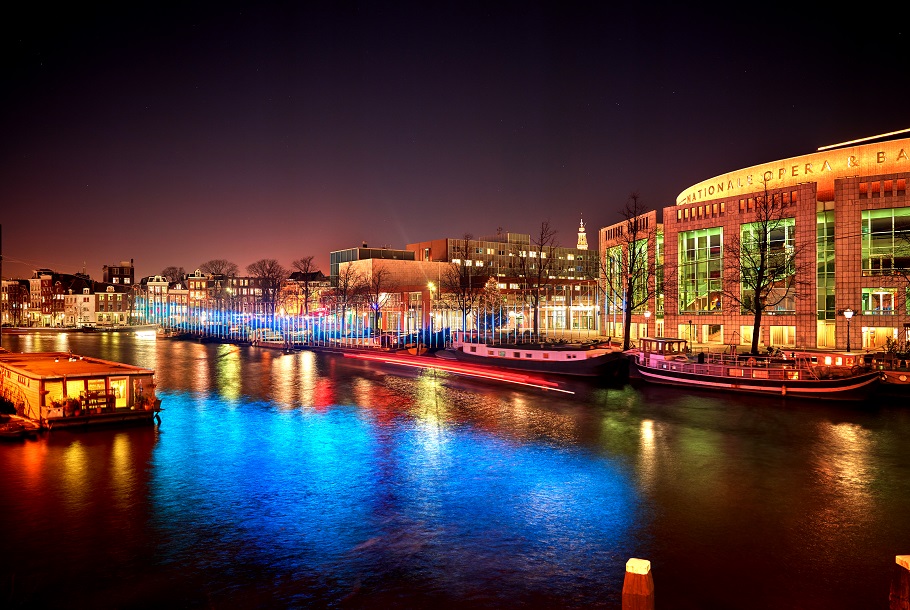 State of Art: 7 highlights at i Light Marina Bay

Culture
State of Art: 7 highlights at i Light Marina Bay
Share this article
Next article

Into its fifth edition, the annual i Light Marina Bay exhibition returns this year to illuminate the Marina Bay waterfront. The sustainable light art festival is held from 3 to 26 March, and features 20 installations created by artists from nine countries including France, Sweden and Singapore. The artworks are centred on the theme of “Light and Nature”, and are crafted with energy-saving lighting and environmentally-friendly materials.

Apart from the installations, the festival showcases other highlights such as music performances, a bazaar, a symposium about the role of light in social settings, and — for the young’uns and young at heart — a zoo-inspired inflatable playground. There will also be pop-up stalls by eateries such as A Poké Theory, Starker Bistro and The Skewer Bar, so you can savour your food while perusing the various artworks.

Here are 7 exhibits to check out at i Light Marina Bay. Ranging from a Northern Lights-inspired presentation, to synthetic flowers that can be “adopted” and brought home, these beautiful installations will help you see art in a different light. This intriguing structure comprises many lightweight umbrellas pieced together to form a dandelion-like shape. It is equipped with a smart lighting system that responds according to visitors’ movement inside. The installation is a collaborative effort by Singapore-based design consultancy COLOURS: Collectively Ours, engineering design firm Web Structure, and a team from SUTD. You can check it out beside Gluttons’ Bay. 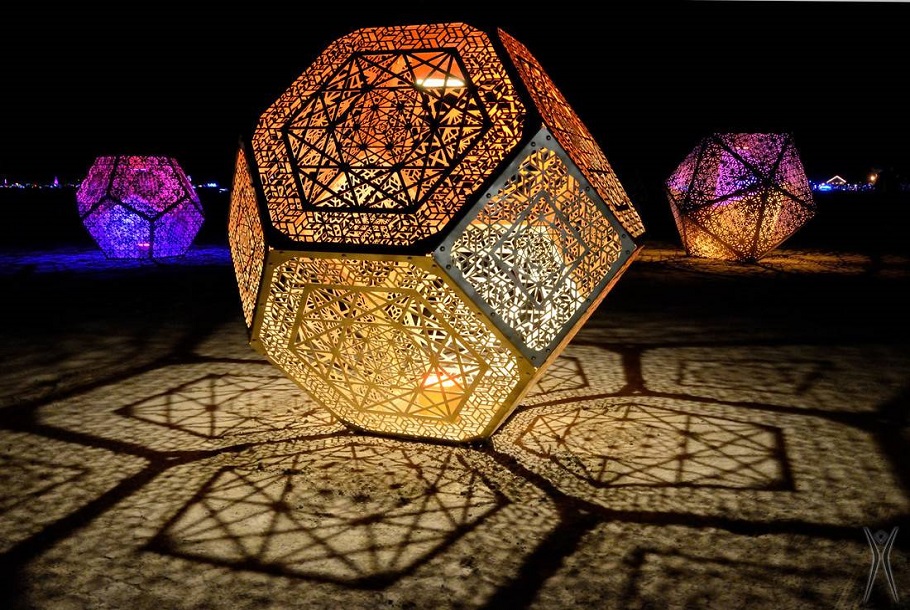 Created by US-based artists Yelena Filipchuk and Serge Beaulieu, this stunning gold installation draws inspiration from science, technology and geometry, and is incorporated with motifs based on ancient Islamic tiles, and patterns created by particle physicists. It is located beside Gluttons’ Bay. 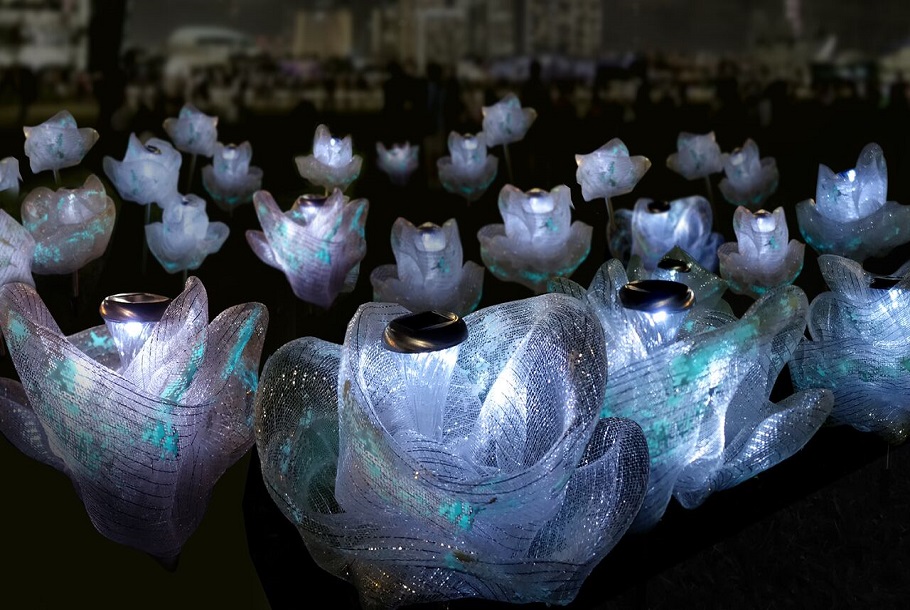 Nature and technology come together in this eye-catching display of glow-in-the-dark, wire mesh flowers by local industrial designer Lee Yun Qin. Each flower is illuminated by its own solar-powered LED bulb, and, for a S$5 donation to the Garden City Fund (a charity that support NParks’ green efforts), can be brought home as a souvenir after the last day of i Light Marina Bay. The flowers can be viewed at the Promontory. 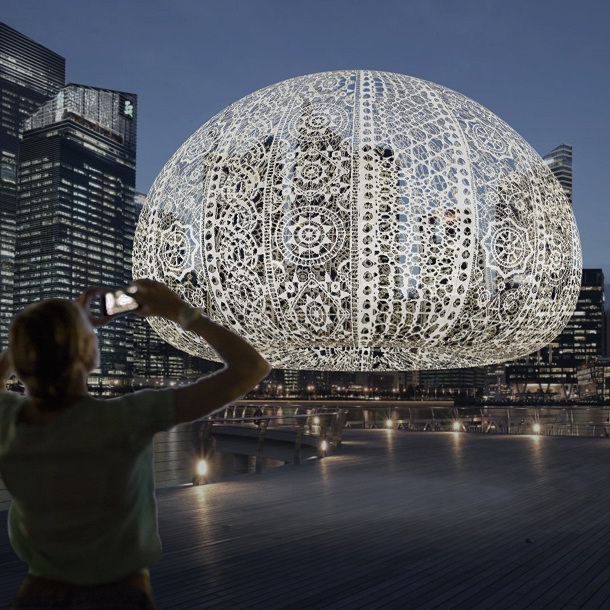 Inspired by the sea urchin, this installation is crafted with intricate lace patterns that light up beautifully at night. It is the brainchild of US designers Jin Choi and Thomas Shine, who run Choi+Shine Architects, and is displayed along the lower boardwalk area.

If you have never seen the Northern Lights, you can finally do so along Marina Boulevard. Well, sort of. This light-art installation by Swedish designer Aleksandra Stratimirovic is inspired by the aurora borealis, and comprises 100 vertically positional light lines equipped with LED sources, which illuminate to create a light show. This quirky exhibit features gleaming giant eyeballs that move and morph when approached by visitors. Depending on how you see it (pun intended), they are either pretty fascinating or downright scary. The eyeballs are placed along Marina Bay Boulevard, and are created by Tropism Art & Science Collective, a Dutch group of artists, designers, scientists and filmmakers. 7
The Body of the Sea

The iconic Merlion gets a luminous makeover in this project by French multidisciplinary art and design team Danny Rose. Thanks to some snazzy lighting, it is bathed in vivid colours and light patterns reminiscent of coral and the skin of marine creatures. The installation can be viewed at the Merlion Park.

Art Culture Design Marina Bay Light State of Art i Light Marina Bay 2017 i Light Marina Bay Light Art
Sara Yap
Deputy Director, Digital Operations (Asia)
Sara Yap is the Deputy Director of Digital Operations at BurdaLuxury, and a contributing writer to Lifestyle Asia’s dining and jewellery beats. When she’s not on the lookout for exciting new restaurants or bejewelled trinkets, she’s probably buried in a riveting read, or reminiscing the good ol’ days with her favourite playlist of ’90s boyband hits.
Dining Pass the Salt Jewellery On The Rocks