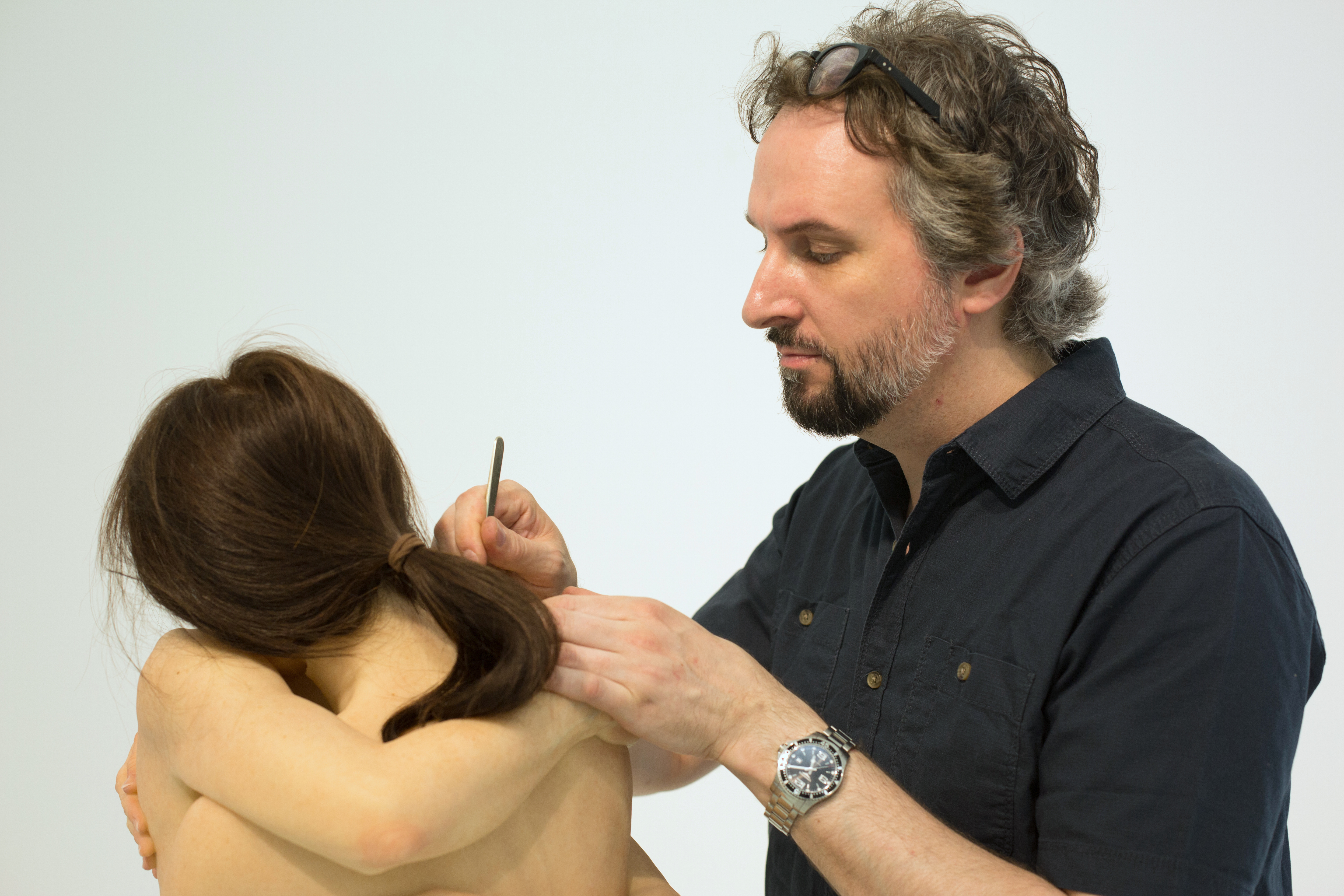 State of Art: Sam Jinks on bringing art to life

Culture
State of Art: Sam Jinks on bringing art to life
Share this article
Next article

A disembodied woman’s head takes centre stage at Australian artist Sam Jinks’ latest exhibition. Its eyes are wide open in an intense stare, while a tangle of snakes takes the place of its hair. With its delicate eyelashes, and fine lines etched in its face, the head looks uncannily lifelike. Over in a corner of the room, a man stands pensively with his eyes closed, and a carcass slung over his shoulder. His hands are spotted with blood from the dead animal, making for quite an unsettling sight.

No, there hasn’t been a grisly crime of any sort. Both the head — named Medusa and based on the eponymous Greek mythological character — and man (titled Carcass Bearer) are crafted from silicone and resin, and are two of three works on display at Immortality Project I, Jinks’ ongoing show at Sullivan+Strumpf Singapore. The 43-year-old artist is known for his signature style of creating hyperrealistic sculptures, and his new exhibition draws inspiration from the concept of immortality and cultural anthropologist Ernest Becker’s The Denial of Death.

Jinks was recently in town for the opening of his showcase, and told us about the concepts behind his sculptures, his penchant for using human hair in his work, and how his wife was his muse for the Medusa head (and loved it).

Lifestyle Asia (LSA): Your exhibition is inspired by the theme of immortality. What does immortality mean to you?

Sam Jinks (SJ): The whole concept of it is about making something that will live on beyond me — like a little ripple or echo. I’m always striving towards trying to make an object that’s more than the sum of its parts. An example would be a crucifix. It’s quite simple, but in times of trouble, people gain comfort from it. My goal has always been to make something special like that. I gravitate towards things that are a bit more profound.

LSA: Can you tell us about the works you currently have on display?

SJ: These are sculptures I’ve been working on for the last year and a half. I feel like they fit nicely together because of their textural elements. For Carcass Bearer, I was referencing the Hellenic sculpture of the Calf Bearer, which was created over 2,500 years ago. There’s also the juxtaposition of the living and the dead, as you have a “living” figure carrying a dead animal.

Then there’s Reunion, which depicts two identical women embracing. A few years ago, I made a sculpture of an old lady holding a baby. And that was inspired by the sight of my mother holding my daughter. Reunion is an extension of that, but with a person embracing herself.

LSA: Medusa is modelled after your wife’s likeness. Why did you pick her as your muse, and how did she respond when you approached her about the idea?

SJ: For me, Medusa is about the whole idea of facing the reality of life and moving on. I’ve wanted to make a Medusa sculpture for a while, and I’ve also always wanted to make a sculpture of my wife Emma. So it seemed appropriate at that time to combine the two. Emma has a tough exterior, but she’s sensitive on the inside. When I first told her about my plan, she was like, “Yes, do it. I’d like to be a sculpture.” So she would sit, I would sculpt, and then I started introducing snakes.

LSA: How did you get started on this style of art?

SJ: I used to work in advertising and was a commercial artist in Australia. I also worked briefly in film, and sculpted dead bodies for movies. I was always interested in making models. And I thought, what better way than to use a little bit of realism to try to trick the brain?

LSA: Your sculptures are a little smaller than the average human size. Is there a reason for this?

SJ: I make the sculptures smaller than life-size because this creates a kind of creepiness. It’s like that feeling when you walk into a dark room, and there’s a mop that looks like it’s got hair and could be a person, and you feel uncomfortable.

LSA: Has anyone ever told you that your works are, well, creepy?

SJ: Yes, of course. In fact, I don’t have any of my sculptures in my house. My six-year-old daughter is frightened of them.

LSA: You often incorporate human hair in your sculptures. Where exactly do you get the hair from?

SJ: Sometimes I buy it, and sometimes I get it from friends. The problem with synthetic hair is that it fades over time, so I prefer to use human hair. I’ve got plenty of people willing to donate their hair. Because of the scale of things, I tend not to require pubic hair. Leg hair suffices because of its reduced size and finer texture. I’ve got a mate who’s like a gorilla, and he has donated quite a bit of hair. But yes, it does get a bit strange and awkward sometimes to receive hair from my friends.

Art Gillman Barracks Culture State of Art Sam Jinks Sullivan+Strumpf Singapore
Sara Yap
Deputy Director, Digital Operations (Asia)
Sara Yap is the Deputy Director of Digital Operations at BurdaLuxury, and a contributing writer to Lifestyle Asia’s dining and jewellery beats. When she’s not on the lookout for exciting new restaurants or bejewelled trinkets, she’s probably buried in a riveting read, or reminiscing the good ol’ days with her favourite playlist of ’90s boyband hits.
Dining Pass the Salt Jewellery On The Rocks