Suntory World Whisky Ao is a multinational blend for the masses

If you ever have intergalactic visitors, Suntory World Whisky ‘Ao’ is a fitting introduction to what we drink on earth.

Officially launched in Singapore this month, The House of Suntory whisky is a blend of the world’s five top whisky producing regions. Suntory also calls Ao extremely versatile, and is showcasing this by partnering with Singapore bar Nutmeg & Clove to serve it in four festive cocktails.

Ao is made up of seven whiskies from five countries: Ardmore and Glen Garioch in Scotland, Ireland’s Cooley, Canada’s Alberta Distillers, Jim Beam from the US, and Japan’s Yamazaki and Hakushu. In a tribute to the oceans that the nations share, the name comes from the Japanese word for blue.

The blend was only possible after parent group Suntory Holdings acquired Beam Inc. in 2014, merging all the brands together under the Beam Suntory name. Suntory chief blender, Shinji Fukuyo was then called upon to create a globetrotting whisky. “It was something I hadn’t done,” he said. “It’s hard to predict each whisky’s nature from different country’s distilleries, not to mention what they would be like blended.”

Fukuyo started by analysing samples from each region. “The process of carefully reviewing each whisky’s strengths was like baseball,” he said. “Is it fast, defensive, or a good hitter?” Working with another blender to consider the whisky composition “three-dimensionally,” they eventually settled on a formula based on the one-hundredth sample, nearly 18 months since Fukuyo began. 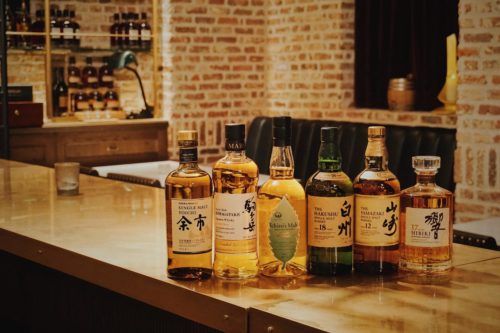 Fukuyo believed this made the whisky very adaptable. “Ao will differ from person to person and situation to situation, he said. “Some will find it sweet, others spicy. Some may find it smooth, while others find it complex.” In our case, the nose was sweet, floral, and quietly smoky. The palate offered vanilla, cinnamon, and an array of tropical fruits, topping out in a smooth, silky finish.

Even if consumers don’t have Fukuyo’s senses, he is confident they will be able to pick out three distinct profiles. “Find the dazzle of Jim Beam, the smoky depth of Ardmore, and the sherry flavour of Yamazaki,” he said. “I think these three flavours are relatively easy to find.”

Fukuyo recommends first drinking Ao neat in a large glass, then adding ice to change its taste. As the ice melts, new flavours can be teased out by adding water. It also works in cocktails, which Nutmeg & Clove demonstrated. The bar has created four examples for the holiday season, including a Boulevardier with dark chocolate, and an egg nog that has Nanyang coffee port wine and brown butter.

Multinational whisky is not new. Independent Japanese distiller Ichiro’s Malt has released thr acclaimed Malt & Grain World Blended Whisky, while American brand High West has combined bourbon, rye, and Scotch in its Campfire blend. Thanks to looser regulations in Japan, some producers there also buy Scotch and bottle it as Japanese whisky.

Jethro enjoys wine, biking, and climbing, and he's terrible at all three. In between them, he drinks commercial lagers, and eats dumplings and gelati.