India consists of 29 states holding a vast wealth of different cultures and traditions, and this diversity unsurprisingly extends to their sweets.

Like their savoury dishes, Indian confectionaries (also known as mithai) are just as varied, complex, and compelling, with each cultural group having their own version. However, many of them share common ingredients. There’s usually a grain or bean flour like chickpea. It’s often cooked in ghee and sweetened with an unrefined cane sugar called jaggery. Additional flavourings include cardamon, rosewater, saffron, pistachio, coconut, or dried fruits.

These mithai are consumed on a daily basis, but with Deepavali coming on 4 November, we thought it’s appropriate to round up five mithai easily available in Singapore. Read on to find out more and where you can get them.

Burfi is a confectionary made from milk and sugar. Either condensed milk or milk powder is used, and it’s cooked over a low flame until a dough forms. The dough is poured onto a baking tray, flavoured with ingredients like pistachio, cashew, cardamon, or dried fruit. An edible gold or silver leaf is also commonly pressed on top. The dough is allowed to set until it becomes firm then cut into rectangular shapes.

Jamun is a round, dairy-based sweet. It’s traditionally made from milk curds called khoya but sometimes milk powder is used instead. Flour and ghee is added to khoya and the mixture is kneaded until a dough forms. It is then divided into balls, fried in oil, and coated in a sugar syrup.

Kheer is a pudding made from milk, sugar, and a grain-like basmati rice. The grain is simmered in milk until mushy before sugar is added. Other flavourings like pistachio, cardamon, and rosewater can be included. Before serving, it’s sometimes garnished with saffron and dried fruits.

Ladoo, sometimes spelled laddu or laddoo, is a meatball-shaped sweet. It’s commonly made from chickpea flour called besan, but other alternatives include wheat or ground coconut. The flour is combined with spices like saffron (or an artificial alternative) for colour, fried in ghee, then combined with a sugar syrup. Flavourings such as dried fruit, nuts, and seeds are added before it’s shaped and allowed to cool.

Peda is another khoya-based sweet. It’s shaped like a thick coin and has a design pressed into it. To make it, khoya, sugar, milk, and a powdered spice like cardamon are mixed and simmered until it thickens. The mixture is then cooled, separated into small pieces, and shaped in a mould. Sometimes nuts like almond or pistachio are added on top.

Where to get the best Indian sweets in Singapore: Moghul Sweet Shop is a store in Little India that’s been selling mithai since 1996. They have burfi, peda, ladoo, and jamun, as well as dilkush (a type of puff pastry made with khoya and pistachio) and the doughnut-like balushai.

Online, Moghul sells their sweets in boxes consisting either of a single variety or an assortment. Alternatively, head to their location to try single pieces. 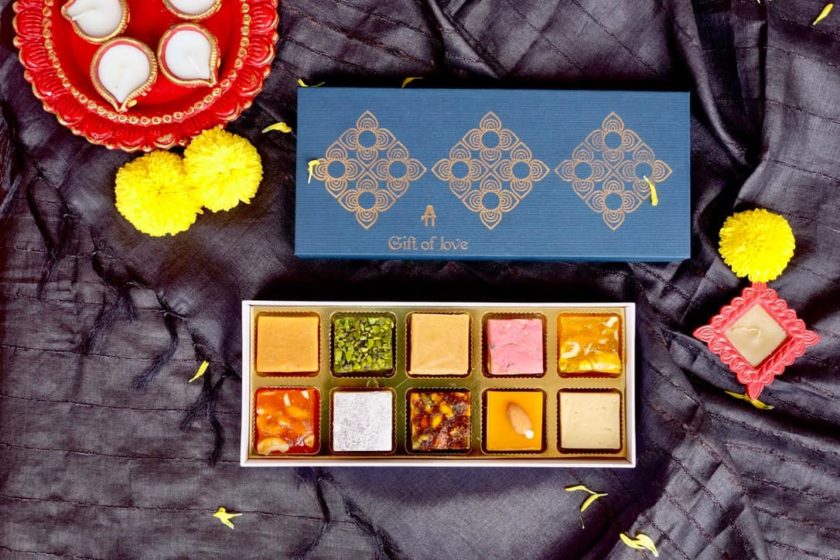 Annalakshmi is an Indian vegetarian restaurant that’s been operating since 1986. It’s staffed by volunteers who serve disadvantaged communities such as migrant workers, low income families, and the elderly with special dietary needs.

Support them by buying their mithai: they have chocolate or coconut burfi, besan ladoo, as well as nei urundai, a type of ladoo made from yellow lentils. The sweets are available either in a set of six for S$9 or gift boxes starting at S$25.

Annalakshmi is open from 11.30am to 3pm and 6pm to 9pm from Tuesdays to Sundays. 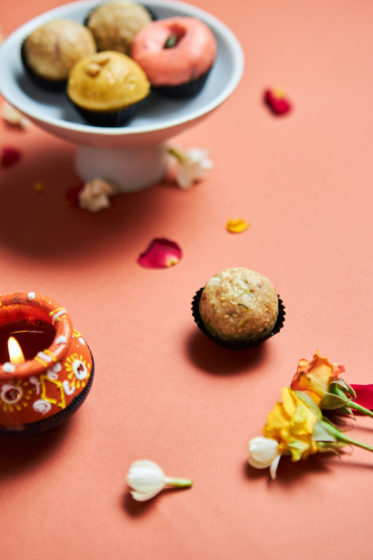 You can try Shangri-La’s mithai two ways this Deepavali. The first is through their gift boxes, which consist of 12 assorted sweets including strawberry peda, coconut ladoo, and sesame ladoo. Boxes are S$49+ each, and you get 10 percent off if you order by 22 October.

The second way is through their Milaap high tea set ($78+). Designed to be enjoyed at home, they have sweets like kaju katli (cashew burfi), motichoor ladoo, and dodha burfi. Savoury bites range from tandoori tiger prawn and lobster tart to chicken curry puff with cumin eggplant puree.

Both the gift boxes and the high tea set are available from 20 October to 7 November 2021. Shangri-La requires you to preorder 24 hours in advance. Orders can be placed from now till 5 November 2021. 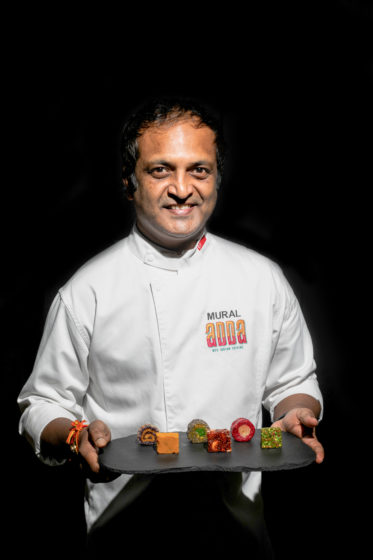 Adda brings back its mithai boxes for 2021 with new and past favourites. They have six styles in total this year, and new flavours include pistachio and paan ( betel leaves with areca nut), blueberry and almond, and mango and lotus.

Returning flavours include lychee and a rose compote called gulkand, saffron, melon seeds, and lentils, and figs, dates, mulberry, and nuts. All mithai are handmade, vegetarian friendly, and do not contain any preservatives.

The boxes are available for pick up from now till 5 November. Additional delivery charges may apply.