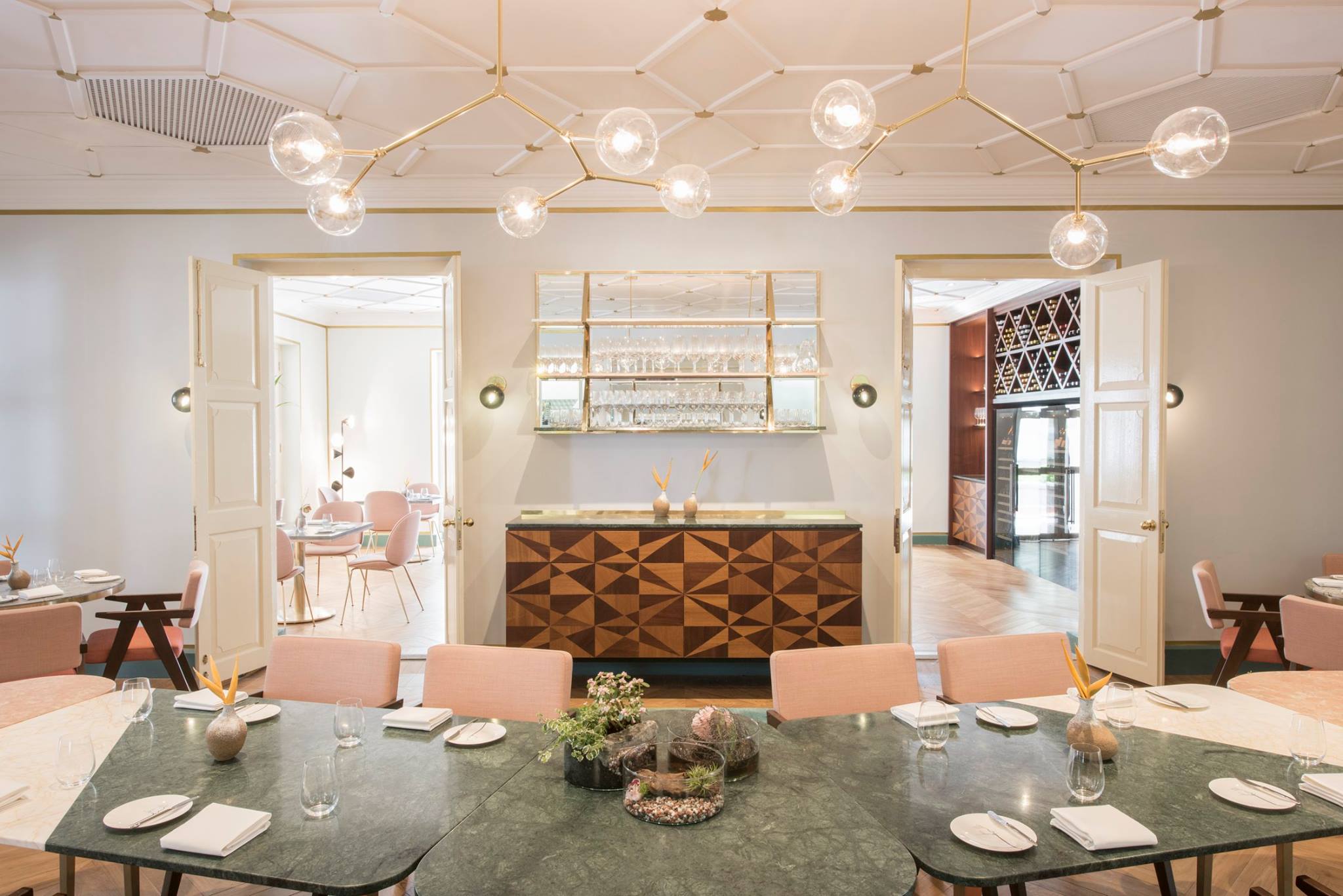 The art of the meal: Restaurant design takes centre stage

There are several factors that contribute to a memorable dining experience. After all, everyone wants to feel pampered and get their buck’s worth when they eat out. But one integral aspect is the design of the restaurant itself.

Be it a laid-back lunch or a fancy fine dining dinner, one can’t deny that a comfortable and stylish locale does make dining out a more pleasant affair. With this in mind, a number of restaurants in Singapore have turned to established design studios to create attractive yet functional spaces.

Popular design concepts include heritage-inspired spaces and the industrial-chic style with exposed structures. We spoke to four prominent design firms to find out more about these trends, and how important is design to the dining experience.

Step into any hipster-chic cafe and you’re bound to see any (or all) of the following: Rough brick walls, cement floors and exposed pipes. Even restaurants such as vegan joint Afterglow, celebrity chef Gordon Ramsay’s Bread Street Kitchen and Indian eatery Zaffron Kitchen seem to have jumped on the bandwagon with stripped-down aesthetics.

“Over the past four to five years, we have seen an increase in industrial and raw design…We expect that this will be trendy for a while more,” says Jerlyn Poh, founder and Chief Designer of JP Concept, which designed Zaffron Kitchen’s interiors. “One important reason for this is that it’s more economical to construct,” adds the designer.

Furnished with exposed brick walls and suspended lamps, Zaffron Kitchen is unabashedly industrial, but gets a dash of glam thanks to the addition of quirky orange chairs and retro floor tiles. “The restaurant has a cosmopolitan and laid-back industrial ambience, with an eclectic mix of furniture and different segments of dining space,” explains Poh, whose firm has also worked on the interiors of Forlino, Garibaldi and La Braceria.

Not all designers are enthusiastic about this style, though. “There’s a knee-jerk reaction to the easy industrial-meets-hipster concept…It’s starting to look lazy,” says Kelly Dickinson, owner and Creative Director of The Stripe Collective, which has designed for Oxwell & Co, La Cantine and Sabio by the Sea.

Getting inspired by space and heritage

Designers are also looking to the restaurant’s venue, history and cuisine as major influences on the concept. Take for instance, London-based firm Universal Design Studio’s work on Odette, which was inspired by Chef Julien Royer’s personal experiences and refined food.

“The restaurant was conceived as a romantic tribute to chef Royer’s grandmother, Odette, who was the inspiration behind his career. So it was foreseen as a feminine and timeless space which feels elegant but human at the same time,” says company director Jason Holley.

To achieve this, Holley used dainty pastel hues, pink terrazzo marble and bold brass accents to create a space that was classically beautiful without being overly formal and straight-laced. “[Odette] is based around a direct dialogue with its location and culture,” he adds.

Local firm Takenouchi Webb was guided by similar principles when it designed the interiors of Modern Australian restaurant Whitegrass. As the establishment is situated in Chjimes’ Caldwell House — a historical building constructed in 1840 for a magistrate’s clerk — the designers decided to create a concept befitting of its rich heritage.

To do this, they segmented the restaurant into various dining rooms that were similar in style but with “subtle differences in the colour palette, furniture and materials to differentiate each space” and added brass, marble and timber — elements that were present in the historical building.

“Our studio believes in a holistic approach to design, and we develop the architecture, interior and furniture specifically for each project,” says Takenouchi Webb co-founder Marc Webb, whose other projects include the Oriental-inspired Empress and colonial-style The White Rabbit.

A greater focus on customisation and craftsmanship

According to Dickinson, who runs The Stripe Collective, a restaurant should be designed to create an immersive dining experience. “How a patron feels when he enters, the immediate sensory experience, what he sits on, sees around him, eats off – all are important staging for the food they are going to eat.  And for bringing them back again.”

To achieve this, some firms have turned to incorporating handcrafted or customised details into their projects. Take for instance, The Stripe Collective’s work on Sacha & Sons, a New York-inspired deli at Mandarin Gallery. The eatery is adorned with handmade elements such as aqua blue tiles on a counter top, while old black and white photos line a wall.

“Every detail — down to the historical family photos — take the diner into the New York deli world, which enhances their enjoyment,” explains Dickinson.

Customised details are also present in Takenouchi Webb’s design for Whitegrass, which includes a wall mural by local artist Messymsxi. Her mural “incorporates the chef’s ideas of food and nature” by featuring animals, plants and herbs, and injects a dash of quirkiness into the restaurant’s sophisticated interiors. “If we could pin-point one of the many restaurant design trends, there has been a move more towards the hand-made, the natural and a greater awareness of quality in both interiors and the cuisine,” says Webb.

Universal Design Studio is also dedicated to using handcrafted and specially curated elements in its works. Its concept for Odette showcases a whimsical art installation by local artist Dawn Ng, while its design for UK restaurant Hoi Polloi contains materials inspired by East London’s “longstanding role as a historic home to skilled trades and manufacturing”.

The latter is modelled after an English modernist brasserie, and juxtaposes luxurious materials such pink marble, natural saddle leather and polished brass with casual linoleum table tops and rustic timber panelling. “The design focuses on craftsmanship, while embedding the space within the historic context of Shoreditch in London, where it’s located,” says the firm’s director Holley.

Gorgeous interiors aside, a restaurant’s design must also take into account practical aspects such as kitchen service and comfortable seating. “Where the service stations are, the flow in and out of the kitchen, and the spacing of the dining tables —  all these things are critical to a guest’s dining experience. We have to get this right and integrated with the overall design for the whole experience to be successful,” says Webb. Holley shares the same sentiment, adding that “materiality, detail, lighting and acoustics are equally important” to the overall dining experience.

Ultimately, designers are committed to creating spaces where patrons can savour not just the cuisine, but the complete experience of dining out. “When you go to a restaurant, there is a sense of theatre and occasion that is emphasised by the interior design,” says Webb. “It’s not just about the food, but also the interiors, service and music.”

Review: After 20 years and a pandemic, Saint Pierre emerges more polished than ever

All the new food and drink menus for August 2020