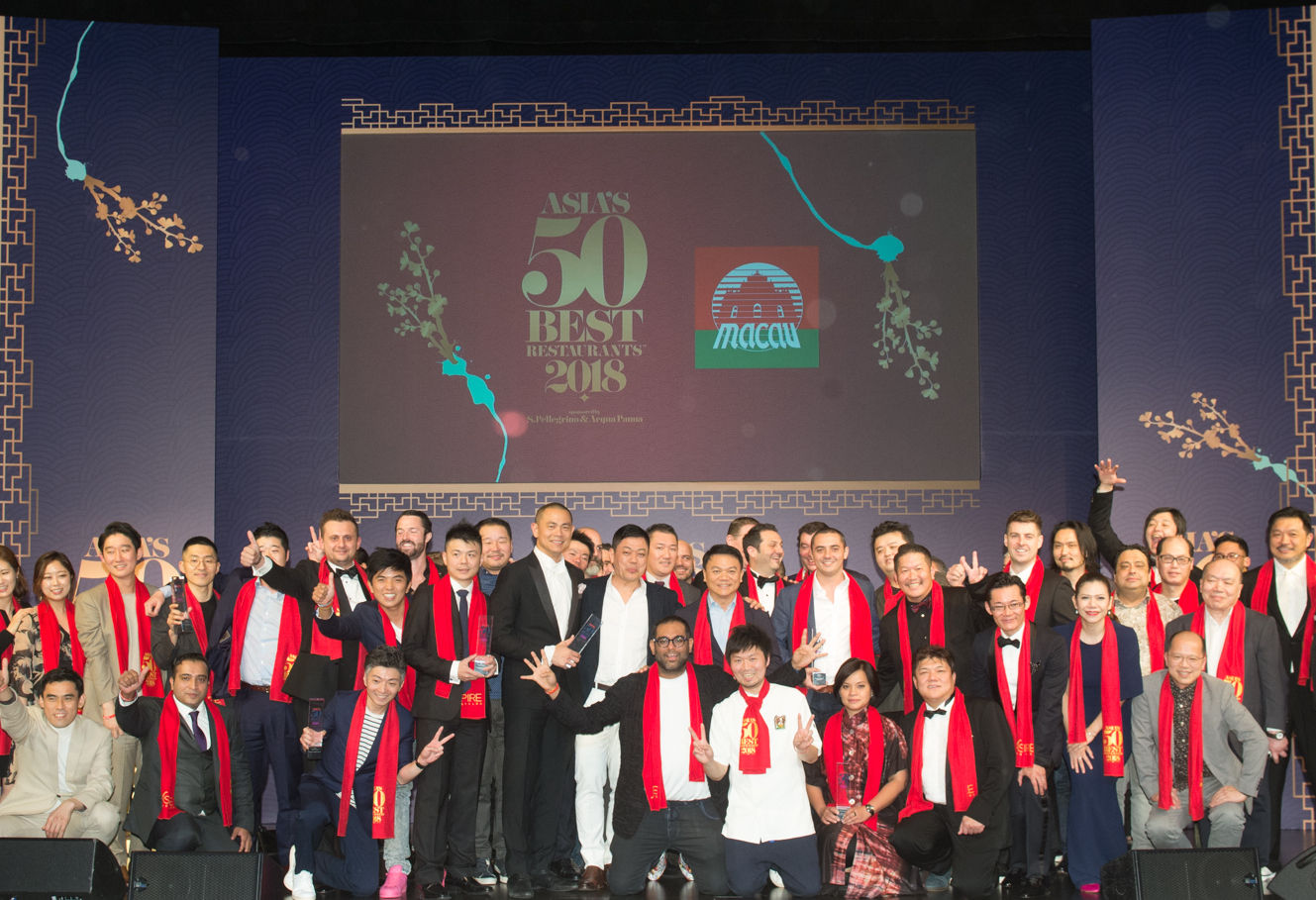 Asia’s 50 Best Restaurants 2018: Here are all the winners on this year’s list

Food & Drink
Asia’s 50 Best Restaurants 2018: Here are all the winners on this year’s list
Share this article
Next article

Every year, the restaurant industry holds its collective breadth for the announcement of Asia’s 50 Best Restaurants sponsored by S.Pellegrino & Acqua Panna — annual restaurant rankings based on a (some would say highly subjective) process of nominated experts, critics and chefs casting their votes for the best dining experiences they’ve had over the past 18 months. Highly influential nonetheless, this year’s awards were held in Macau, and it was a culinary star-studded event with nominees and award winners from top restaurants all across Asia descending on the Wynn Palace for the anticipated results.

Taking top honours this year as Asia’s Best Restaurant 2018 was Gaggan (no surprise here), with the gracious Gaggan Anand accepting the award for an incredible fourth year in a row, as he rides the wave of reverence for his progressive Indian restaurant before it officially closes in 2020. Spots #2-5 were all new this year to the top 5 ranking: Tokyo held the #2 and #3 spots with modern kaiseki eatery Den and French restaurant Florilège, which debuted on the list just last year. At #4 was Sühring from Bangkok (#13 last year), followed by Singapore’s Odette, which won last year’s Highest New Entry award.

8 1/2 Otto e Mezzo Bombana dropped from #4 to #13, surprising given that Umberto Bombana won the Diner’s Club Lifetime Achievement Award 2017; and Richard Ekkebus’ Amber also fell in the ranks from #3 to #7. Hideaki Sato’s French-Japanese restaurant Ta Vie jumped to the #16 spot, after climbing from #48 to #33 last year. Also impressive: The Chairman rose a whopping 25 spots to land in #22 and take home the Highest Climber Award, an accolade it shared with Mume from Taipei. Meanwhile, Joël Robuchon’s dual establishments in Bangkok and Hong Kong dropped off the list altogether.

There were seven total new entries on this year’s list. In Hong Kong, new entrants included French SoHo bistro Belon, led by the commendable chef Daniel Calvert; while Neighborhood — which has been quietly dishing up fantastic French-Italian fare over the past few years — received recognition for its chef-owner, David Lai. Caprice thankfully returned to the list this year at #46, and last year’s newcomer Ronin rose four spots to land at #41.

As the restaurant industry continues to face increasing scrutiny over equality in the workplace, awards such as the elit® Vodka Asia’s Best Female Chef are becoming increasingly important to highlight women in the industry with a strong, progressive vision for gastronomy. This year, the esteemed honour went to chef Bongkoch ‘Bee’ Satongun of Paste restaurant in Bangkok, known for her bold, complex and multi-layered Thai dishes. She will join previous recipients including Hong Kong’s Vicky Lau and May Chow.

Outside of the official rankings, the biggest award of the night — the Diner’s Club® Lifetime Achievement Award — went to chef André Chiang, just a little over a month since he closed his flagship Restaurant André with the goal to rediscover his roots in his native Taiwan (Restaurant André has appeared in the top 3 spots on the list for all six years). Chiang scored another victory as his Taipei restaurant Raw jumped 9 spots from #24 to #15 to snag the Best in Taipei award.

The awards also anointed Manila’s Toyo Eatery as the Miele One To Watch Award, with chef Jordy Navarra championing Filipino cuisine with inventive, locally sourced dishes. The Best Pastry Chef 2018 went to a well-deserving Nicolas Lambert of Caprice, while La Cime in Osaka picked up the honour of Highest New Entry. A new award this year was the Sustainable Restaurant Award, which restaurants can opt to enter by subjecting their outlets to an independent sustainability audit. The award went to L’Effervescence in Tokyo for its commitment to sustainable produce and clean cooking.

Asia’s 50 Best Restaurants are chosen based on a polling of 318 experts — comprised of food critics, chefs, restaurateurs and highly regarded ‘foodies’ — who each cast 10 votes based on restaurants where they’ve had the best dining experiences over the past 18 months (It’s worth noting there is no rule against accepting free meals, although voters must remain anonymous). Together, they cover 26 countries in total, divided into six regions in total, with 53 voters for each region reporting to an Academy Chair.

Here are all of this year’s winners, with Hong Kong restaurants noted in boldface:

Hong Kong Dining Restaurants Best Restaurants Asia's 50 Best Restaurants Where to eat Asia's 50 Best best restaurants asia world's 50 best where to dine
Leslie Yeh
Editor in Chief
Having worked as a lifestyle editor for almost 10 years, Leslie is thrilled to be writing about the topic she loves most: wining and dining. When she's not out pounding the pavement for the latest new restaurant opening or tracking food trends, Leslie can be found at home whipping up a plate of rigatoni vodka and binge-watching Netflix with a glass of Sauvignon Blanc in hand.
Dining Restaurants Food Trends Drinks Travel
Sign up for our newsletters to have the latest stories delivered straight to your inbox every week.