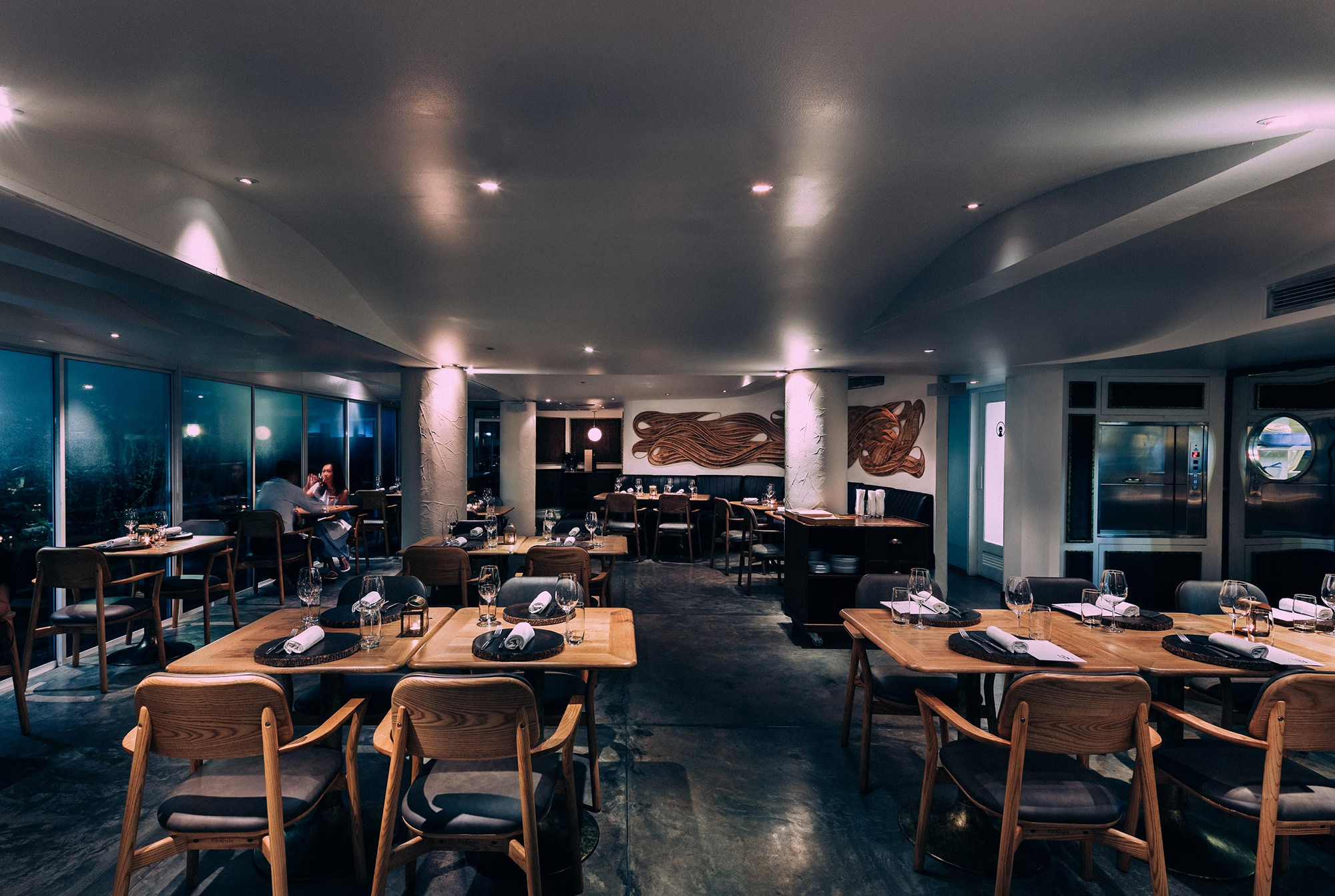 Bangkok’s food scene is a hive of options. Walk along the streets and you’ll be assaulted with the sights and sounds of hawkers clanging woks over monstrous fires, drizzling sauces over sizzling stir-fries and stirring large pots of steaming broths.

Yet the past five years have seen the Thai capital unleash a slate of fine dining restaurants and a new culinary energy that can rival Singapore and Hong Kong. The person who’s been watching it all? Chef Thitid Tassanakajohn — or just chef Ton — the man behind acclaimed contemporary Thai restaurant Le Du.

As the chef and owner of one of Bangkok’s finest establishments, he has a message for the world: “Asian food can be refined too.” After all, the fine dining scene is still dominated by restaurants that serve up European and Japanese cuisine.

He is so determined to drive the message home that he even enrolled at the Culinary Institute of America to arm himself with the right skills back in 2008. In the years after, he counts Eleven Madison Park and Jean Georges – just some of world’s most highly regarded restaurants as his former workplaces. The aim? To refine, and redefine Thai cuisine in the eyes of the public.

“I want people to understand more about Thai food and look at it in a different way,” he says. “That’s my goal: To make Thai food one of the best cuisines in the world.”

Then in November 2013, Le Du, which focuses on Thai flavours and seasonal ingredients was born. Naysayers were quick to point out that no Thai person would pay such prices for Thai food. But five years on, Le Du has landed as one of Southeast Asia’s top tables, placing at number 14 on the Asia’s 50 Best Restaurants list 2018.

He was in Kuala Lumpur recently where he cooked at the St. Regis Kuala Lumpur for a few nights. We catch him in between service to get him to explain what seasonal Thai ingredients really mean, how the Bangkok dining scene has morphed into a different beast and whether too much excitement can actually be detrimental.

Did you always know you wanted to do an elevated version of Thai cuisine?
I’ve always wanted to do Thai food. That was my goal in going to New York. I wanted people to see Thai and Asian food as something that can be refined and not just cheap.

At that time, think of Thai food, and most would think of street food. I want them to see the gastronomic and fine dining side of Thai cuisine. Every cuisine needs to evolve and Thai cuisine has been stuck in time for too long. Yes, people love it but if you don’t change and remain still instead, you will die.

All the good cuisines — Japanese, French and Italian — have evolved. They’ve all grown and progressed so much in the last 50 years, but not Thailand. That’s why I want something to happen to Thai cuisine. My cuisine might represent Thailand in a different direction, but it’s still rooted in Thai culture. Asian food can be refined too.

Tell us more about Thailand’s seasons and its ingredients
It’s the same as a lot of Southeast Asia. It’s hot most months and then rainy [for others]. Up north of the country, it can be cold in the winter — up to zero degrees in the mountains. People take it for granted that we can grow almost everything all year round so they forget that there’s the best season for everything. The problem is that people in Thailand eat the same thing as everyone else, like broccoli, or carrot — you’ll see these vegetables all over the supermarket but no Thai vegetables or seasonal produce.

Could you give us some examples of Thai seasonal produce?
For example, I will go back to the restaurant at the end of the month and change the menu. Around this time, there’s ant larvae, or ant eggs which I use every year. It grows wild and you have to forage it from the northeast of Thailand. There, they have it in an omelette, in soup or a spicy salad. The season is only three months and that starts from now to July and early August. It’s part of their natural life cycle.

In recent years, Bangkok has emerged as a fine dining capital – what has changed since you started Le Du?
When I started, it was only starting to pick up and I think Le Du came at the right time. There are places like Nahm, Gaggan and Bo.lan which already paved the way before me. Since then, Bangkok’s food scene has changed completely. Before that, there are not many standalone restaurants — you either dine at a hotel or a famous restaurant like Gaggan or Bo.lan. These days, everyone has their own restaurant – young chefs and old chefs — and they all have their own bar.

People these days travel to Bangkok to eat more than street food. They want something more refined. People in Bangkok are also spending more money and are more sophisticated — similar to the people in Singapore and Hong Kong. It’s exciting, and of course, all the big name chefs like Joel Robuchon and Alain Ducasse are coming. That’s a sign that we’re ready, that’s why they’re here.

So when you started five years ago, were people receptive?
When I first opened the restaurant, people told me: “You’re going to fail. No Thai person would pay that price for Thai ingredients.” But I said: “I will make sure I’ll get the best local ingredients and give them the best treatment.”

I want people to see that local ingredients are as good as European ingredients. It’s not about where it’s from, but about how you treat it. Diners came and decided it’s worth coming back for. Otherwise, they can go out on the streets and pay 50 baht for something while in my restaurant its 2000-3000 baht. So in the end, I showed them because I’ve survived for five years now.

I’m actually quite proud that Thais are my main customer. Yes, we’re known on the international stage but 60 per cent of my customers are Thai. When the seasons change, they come back to eat too.

What are the challenges of running a restaurant in Bangkok?
Bangkok’s restaurant scene is great but at the same time, there’s a lot of new restaurants opening all the time. People would try new places – it’s not too bad for us but other restaurants are fighting for the same group of customers.

I mean, it’s good that the restaurant scene is picking up but people think it’s an easy way to make money. They keep opening all these places but running it is a challenge. I like seeing a restaurant open but it has to be a good restaurant — not because people just want to make money. The market can be too saturated but the quality may eventually go down.

Comparing the Asia’s 50 Best Restaurants list and Michelin, which had a bigger impact?
We have to give a lot of credit to Asia’s 50 Best Restaurants, because that put Bangkok as a fine dining destination on the food map. The spotlight shone when Nahm was named the best restaurant in Asia, and of course, then there’s Gaggan for four years in a row. These five years have been the big turning point. Now, people see Bangkok as a fine dining destination. And when people come, they don’t just eat at Nahm, Gaggan, Bo.lan or Eat Me.

It’s still early days for Michelin – it’s only the first year. Like in Singapore and Hong Kong, everyone complains on the first year. Last year they didn’t have any Thai inspectors. This year, they do, so it takes time.

So what’s next for you?
I have another restaurant in Bangkok – Baan, which is for soul food, and I think that’s the true representation of what I want. I would like people to understand more about Thai food, and look at it in a different way. I want to change perceptions that Thai food is just spicy. That’s my goal: To make Thai food one of the best cuisines in the world.

Bangkok Le Du Thai cuisine Bangkok Restaurants Chef Interview The St. Regis KL Asia's 50 Best Restaurants 2018
Azimin Saini
Editor
Azimin Saini is the Editor of Lifestyle Asia and manages the team in Singapore. He has been told the sound of his backspace is like thunder through the clouds. On a regular day, he has enough caffeine in him to power a small car.
Restaurant Review Chef Interview Entrepreneurs