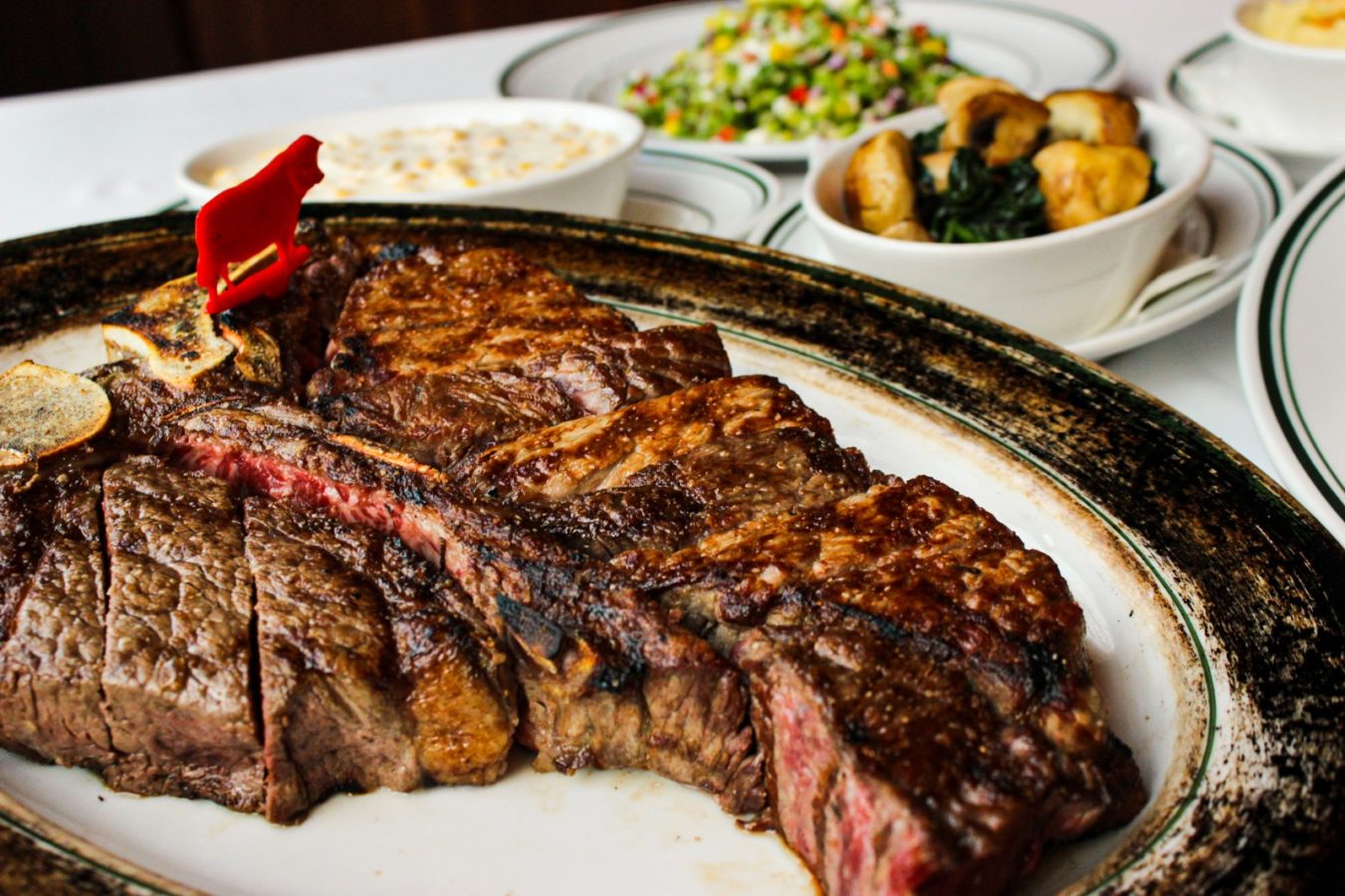 A very wise man named Ron Swanson once said, “I need five courses for dinner, and each course will be steak.”

Call it hedonistic and a cause for impending indigestion, but these are words we subscribe to. Few things in this world can satisfy like a good cut of beef, seared in a pan the way Louis-Camille Maillard intended. Tucking into a steak is as elegantly primal as dining gets.

Not many animal proteins blush pink when sliced and don’t spell salmonella. Instead, the rareness is a small tease to the union of gloriously rendered fat, sinew, and juice that awaits. We could deliver these steak adages for days.

With every good thing comes a bad: steak, as simple as it is, can be one of the most challenging things to prepare if you have no clue what you’re doing. To this, we say, let the experts handle it. Let the steakhouses in Singapore prepare your cut of choice for you, so all that stands in the way between you and channelling Ron Swanson is an order to be made.

While dining at your favourite steakhouse in Singapore may not be the most feasible right now, thankfully these restaurants have now banded to offer steak delivery to your doorstep, still hot off the grill. For our choice of steak delivery options, read on. 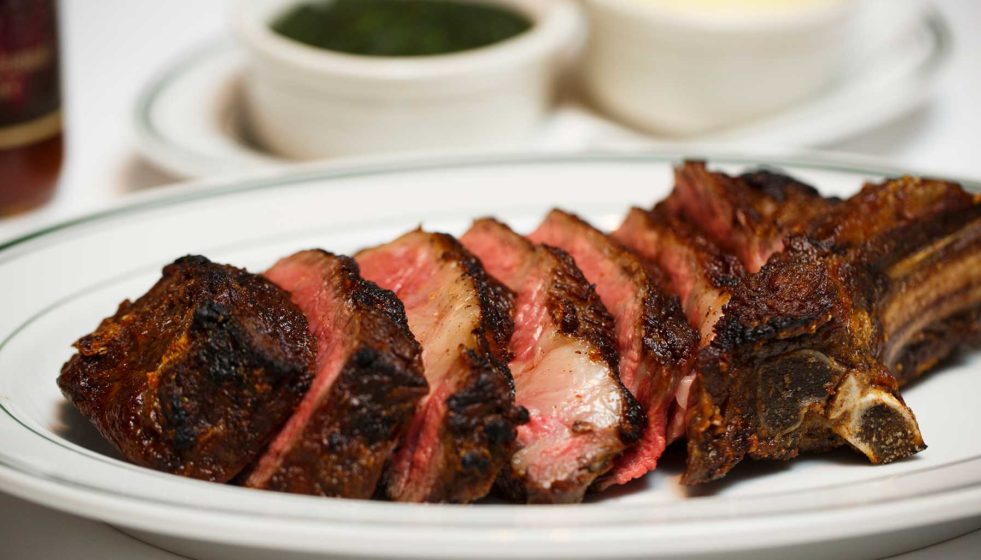 If it is classic, heart-filling, rib-sticking steakhouse fare that you crave, then Wolfgang Steakhouse is the choice. Established by chef Wolfgang Zwiener, this New York-based steak institution prides itself in serving USDA prime grade cuts, dry-aged for 28 days, offered alongside inventive burgers, salads, and classic sides. The true star at Wolfgang Steakhouse is the very dish that gives it its name: steaks seared to absolute perfection, cloaked in a well-seasoned crust that keeps on giving. The steaks are also generously-sized, averaging 500g to a whopping 2kg porterhouse. We ordered the filet mignon, which still retained its medium-rare cook upon arrival, and it was a textural marvel, underscored by just the right amount of marbling.

The burgers at Wolfgang Steakhouse are also a must. The classic Wolfgang lets the patty, which is made from the same grade of beef used in its steaks, speak for itself, adorned with only lettuce, tomatoes, onions and pickles to cut and crunch. Lifting it up is ambitious enough, given that the portion must weigh nearly a pound, but it takes a bite to remind you why the star of a burger should always be the meat, and never the accoutrements that come with. For those that prefer burgers with a little more, the steakhouse does pride itself on its Burger of the Week offering, where flavours like satay, chilli con carne and more are all fair game.

To go with the mains, a staple caesar salad drizzled with housemade dressing and a hunk of thick-cut bacon — no dried-out bacon bits here – and sautéed peas with onions. The latter is a side that not only makes you feel better about having some greens to go with the serious amount of protein working your way through your system but imbues humble peas and onions with the quality of a slow-cooked, almost roasted dish, caramelised and browned in all the right places.

You’ll have to physically will yourself to move after finishing your order from Wolfgang Steakhouse, and it is worth it. 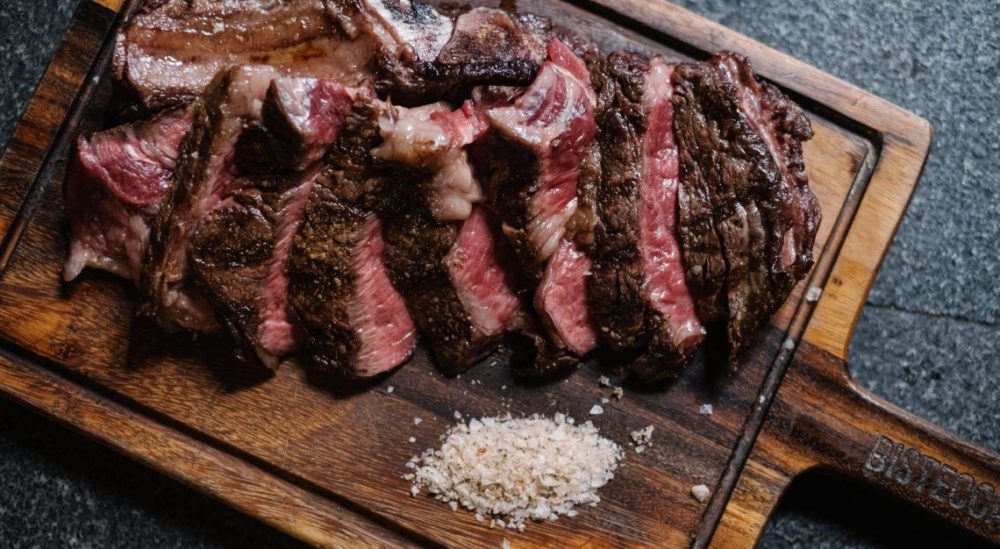 In Italy, especially Tuscany, steaks are a reason to share and often arrive at the table in generous platters. Bistecca Tuscan Steakhouse takes that method and applies it to all the steaks it prepares, cooking all its cuts in a high-heat, wood-fired grill. The beef hails from Australia, and are pasture-raised too, which reflects in every tender bite.

Ordering the Florentina, a hulking T-bone steak for sharing is a must. To accompany, choose from the restaurant’s selection of pasta and antipasti. Sometimes, you just want a steak with no frills. Meat n’ Chill is perfect for that. The steak-and-ribs establishment offers reasonably-priced portions of grass-fed beef in your steak cut of choice, accompanied by two sides. These are available with entrées aplenty, including pasta dishes, burgers and sandwiches. Take Meat n’ Chill as your neighbourhood steak joint but better, with hearty portions and plentiful options to feed the whole family. French-style steak frites establishment L’Entrecote offers gourmet bistro fare delivered to your doorstep. This includes its classic L’Entrecote sliced steak, complete with the house “secret sauce”, which you can order as part of a sharing menu for couples or families. Said sharing menu also includes a cheese platter, salad and fries as sides (naturally), and a choice of tarte tatin or lush chocolate mousse for dessert. The Mandarin Oriental’s beloved steak restaurant, Morton’s, has released its Morton’s To Go initiative, where one can order its premium steaks and sides from the familiar menu, or opt to DIY with its Steak Kits and Butcher Cuts. If you really know how to work a grill, then let Morton’s do all the prep for you. These kits feed up to eight, with surf and turf options to boot. All are served with your choice of two sides as well, making it a full dinner affair. Prices start from S$138 for two.

Website
Website here
Order here
Steak Food Delivery #LoveYourLocalSG
Beatrice Bowers
Features Editor
Beatrice Bowers writes about beauty, drinks, and other nice things. When not bound to her keyboard, she moonlights as a Niffler for novels and can be found en route to bankruptcy at your nearest bookstore. Don't tell her boss.
Drinks Beauty

How to plan the perfect picnic in Singapore

What to order this week from Jigger & Pony, Publico and Cicheti