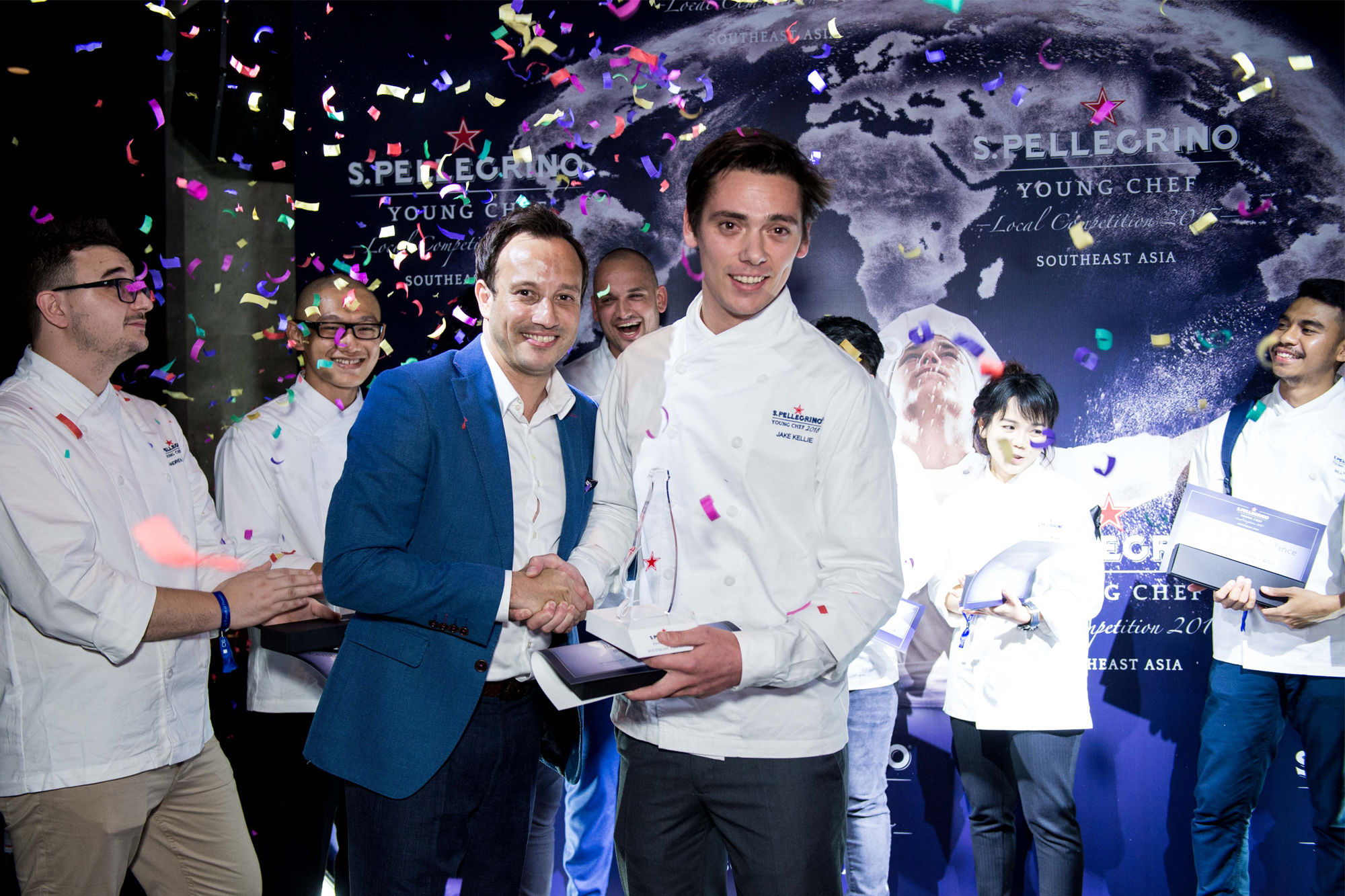 Take part in the finals for the Young Chef 2018 competition and vote for chef Jake Kellie in the Fine Dining Lovers People’s Choice Award. This award, while separate from the Grand Jury’s vote will be a way for the digital food community to reward their favourite chef. Voting ends on 13 May 3pm (GMT +2). Click here to vote.

“You wanna go grab a coffee?” asks Jake Kellie as he adjusts his slick barbershop pompadour.

Dressed in a black tshirt, dark jeans and forearms etched with tattoos, Jake looks every bit like an indie musician plucked from the Melbourne underground.

But he’s a rockstar of a different tune: one whose tools are not guitars but knives and whose chords are layers of flavour.

Jake Kellie is a rising star in the culinary world. Not only is he helming Burnt Ends — one of Asia’s best restaurants with a waitlist that can stretch up to six months – but he beat nine other contestants in the S. Pellegrino Young Chef Southeast Asia Regional Final this year and will go on to represent the region in the finals in May 2018 to be held in Milan.

Previous representatives include Kirk Westaway who won when he was a sous chef under Julien Royer at Jaan but has now come into his own and even led the restaurant to its Michelin star.

Already, he has shown immense promise. The dish that won him his crown was highly conceptual and representative of his Australian background thanks to the use of native Australian ingredients. Here, pigeon is aged in pepper leaves, hay and strawberry gum for two weeks and served with a berry compote on a plate handmade in Australia that’s been glazed with ashes from the ovens of Burnt Ends.

Did we mention he also turns only 27 this year? We chat with him over a coffee on his beginnings, what contemporary Australian cuisine means to a young man like him and what his own restaurant would look like.

Why did you decide to be a chef?
I did hospitality and food science at school, I’ve always had a strong passion for it because I was always doing something. I won an award back home – I was the hospitality student of the year and that triggered the thought that hey, maybe I could make a career out of this and give it a go.

What was your first task as an apprentice?
Peeling onions! [Laughs]

My first chef de partie role in London was at The Ledbury which was a two-Michelin-starred restaurant. Then I came back to Melbourne and took over a small restaurant called The Commoner where I got the understanding of running a restaurant and coming up with my own dishes.

I was 23 at that time and it was a gamble for the owners to hand over the reigns to such a young chef. I was there for two years and during that time I was runner up to Australian chef of the year and went to Estelle to become chef de partie, take a step back to learn how to cook again, and I guess get my arse kicked again. Then I moved out to rural Victoria to a place called The Lakeside Mill and that was when I got the Australian Chef of The Year.

Do you agree with the notion that chefs today are no longer just chefs but also visionaries?
The longer we go into the interview the deeper it gets huh? [Laughs]. To some extent yes, but you have to know your place. We’re not rockstars. We’re here to cook food and make customers happy. For example, when someone comes to Burnt Ends, as soon as they walk out I make sure they had the best night of their lives and that you’ve had a lovely evening. Making sure that customers are happy is our job as chefs.

Any dreams of opening your own restaurant?
I’m starting to think about it a lot more and more. Where? I don’t know. At this point I think it will be Asia.

Singapore?
Potentially yeah, we’ll see what happens. In the broader landscape, the opportunity to really push for something greater – the doors are wide open here. I’m not saying Australia is not like that but I’ve lived there my whole life so something different would be good.

What would it be like?
It would have to do with fire, a bit of charcoal. A little bit of Australian ingredients – I’m still thinking.

What does the term contemporary Australia cuisine mean to you?
In Australia we have a vast variety of cultures in our food. Contemporary could be the right word for it, but: Does Australia have a cuisine? I don’t really know. Each chef is totally different. One chef could’ve spent time at Narisawa, and when he comes back, he could incorporate those flavours somehow into his food. It’s a hard thing but thinking about how Australians eat is vital. I’d be curious to see what it’s like in five to six years time.

Burnt Ends Chef Interview S.Pellegrino Young Chef Modern Australian Restaurants Singapore Jake Kellie Australian Contemporary Australian Cuisine
Azimin Saini
Azimin Saini is a contributor to Lifestyle Asia. He has spent a decade in journalism, writing for The Peak, Style:Men and the Michelin Guide.
Restaurant Review Chef Interview Entrepreneurs
Sign up for our newsletters to have the latest stories delivered straight to your inbox every week.