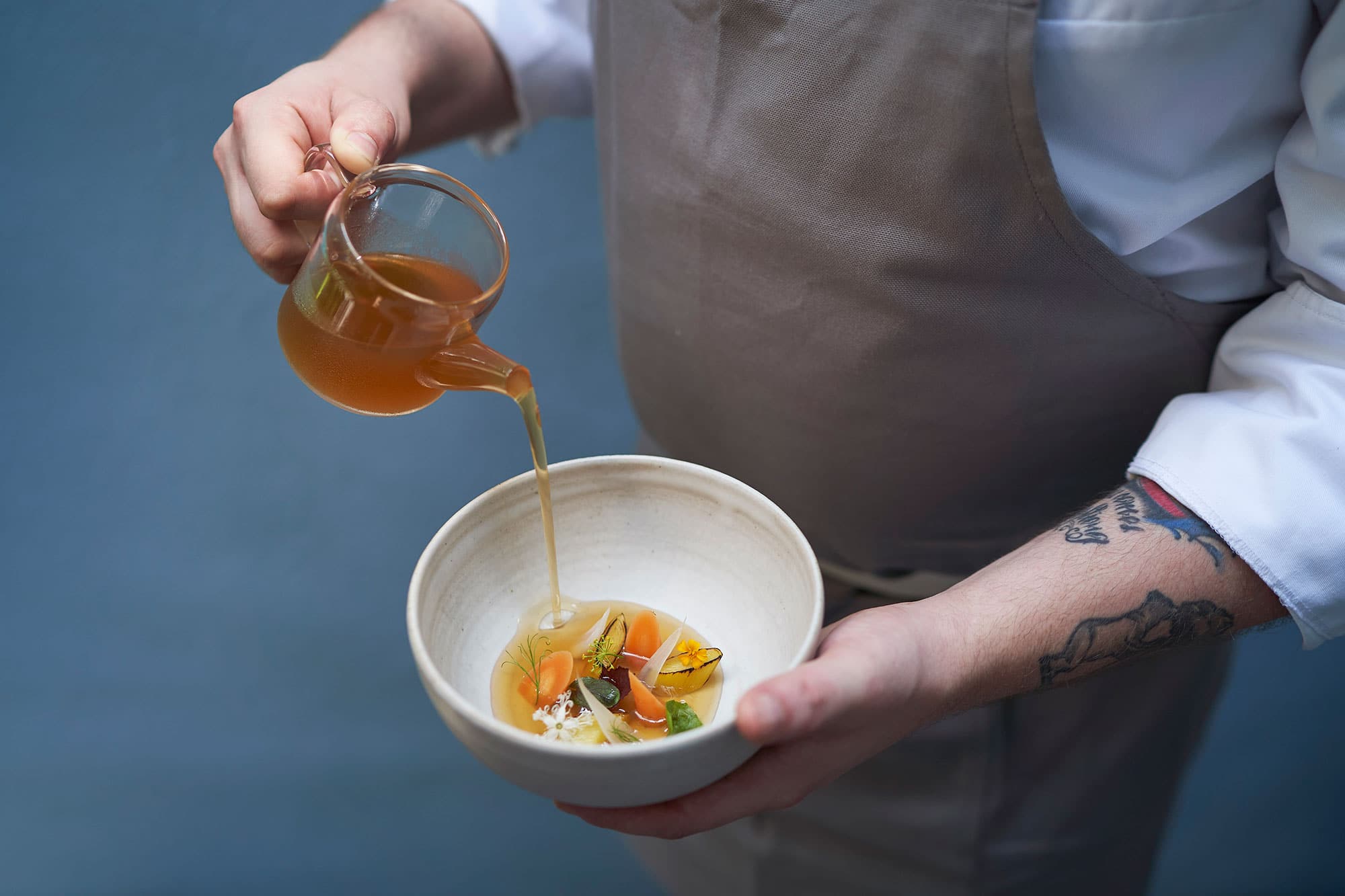 It may not have the same mass appeal as French and Italian cuisines, but Basque Country’s unique gastronomy deserves time in the limelight. That’s what chef Aitor Jeronimo reckons, just after getting a Michelin star for his first restaurant Basque Kitchen, Singapore’s first restaurant dedicated to Basque cuisine.

Previously, Jeronimo was chef de cuisine at Iggy’s and played some part in getting the modern European restaurant its first Michelin star in 2017. Shortly after, he dropped it all to be co-owner of Basque Kitchen, created in collaboration with Unlisted Collection.

Choosing to introduce Basque dishes in Singapore could be seen as a terribly risky choice. Not many are familiar with it, even if Basque cuisine is one of the most celebrated on both the Michelin Guide and World’s 50 Best Restaurants list. A community of ardent food lovers and innovative chefs have done as much to drive attention to the cuisine.

At Basque Kitchen, Jeronimo weaves in rich produce from both land and sea, traditional techniques and wines characteristic to the region he has become an unofficial ambassador to. The small window of the restaurant’s open kitchen sees garlands of dried choricero chilli peppers and the wine cellars feature txakoli wine and Zapiain apple ciders alongside exclusive vintages.

All these colourful scenes converged into simple looking dishes. A plump sliver of anchovy is just presented on sourdough toast with diced tomatoes and olive oil caviar. A Basque delicacy of kokotxas (read: the fleshy part of a fish’s jaw) comes together with a collagen-rich pil-pil sauce scented with pandan oil.

The chef-owner has his work cut out for him in striking out an identity for Basque cuisine here. But, having worked in stellar establishments such as Mugaritz and The Fat Duck, Jeronimo is well-armed with experience to take his Singaporean restaurant further. His recent accolade — a Michelin star — should serve as sufficient proof of his efforts.

Food & Drink
Where to eat in Basque Country, according to their best tour guide

When you first joined Iggy’s, you’ve managed to clinch a Michelin star. But you decided to give it up for Basque cuisine. Was it a difficult decision for you? Why did you do it?
I wouldn’t say that the decision was a difficult one because ultimately, Basque cuisine was the reason why I started cooking professionally in the first place. Food has always been the language of love in my family and I grew up being strongly influenced by both my grandmothers who each come from a different side of Basque Country, and who were both exceptional cooks. I have very fond memories of the warm, hearty and rustic meals prepared at home, so to finally be able to establish Basque Kitchen by Aitor is akin to my culinary journey coming full circle: Not only am I able to reconnect with my heritage through food, but I can also pay tribute to two of my greatest inspirations in life ‒ my grandmothers.
How did your experiences at Mugaritz and The Fat Duck define your cooking or philosophies?

Mugaritz and The Fat Duck have no doubt been crucial to my formative years as a professional chef. The Fat Duck’s research and scientific-based approach to cooking taught me the importance of utmost precision and accuracy when crafting dishes. As Chef de Partie of Mugaritz, I learned the key principles of innovation, creativity and commitment to showcasing the freshest produce.
It is through this lens that I have learned to modernise, refine and elevate heritage recipes, taking their enjoyment and appreciation to a new level. Under these Michelin-starred establishments, I have been able to cultivate an approach to food that is not only seen as a means to satiate hunger, but to provoke and celebrate creativity and imagination.
When you opened Basque Kitchen, how did you try to distinguish yourself from Spanish cuisine?

It was important for us from the beginning to distinguish ourselves from Spanish cuisine because the truth of the matter is that Basque Country, a region with its own unique set of culinary traditions, does not often get a chance to tell its own story. While it sits in between Spain and France, and naturally has influences from both cultures, there exists within Basque Country an autonomous community with its own distinct cultural landscape, traditions and language.

There are diners here in Singapore who have travelled to food destinations like San Sebastian and have enjoyed the food there, so they have an inkling of what Basque Country has to offer. Others who have not been to that part of the world might expect Spanish food, like your paellas and tapas.
This is why instead of what you would commonly find in a Spanish dining establishment, we distinguish ourselves by providing a Basque-centric experience focusing on celebrating the culinary traditions of Basque Country, and my own heritage. This is done not only through some of the Basque produce we use, but also through the inspirations and history behind some of our dishes, and cooking methods like charcoal grilling and stewing.

So, what is traditional Basque cuisine then?

In Basque cuisine, there is an emphasis on quality produce and simplicity in cooking. Our cuisine is built around authentic and local products like grilled lamb, cured meats, salt cod, sheep’s and goat’s cheese, piquillo peppers, artichokes, and fresh anchovies, to name just a few, because of the abundance of produce from the surrounding land and sea. Traditional cooking methods include charcoal grilling and stewing, while dishes are often only gently enhanced using olive oil, onion and/or salt.
These quintessential elements of Basque cuisine are reminiscent of my childhood as I recall often being in the kitchen with my grandmothers while they were either grilling meats or stirring a pot of something warm, hearty and intensely delicious.
How do you try to make your dishes relatable to Singaporeans?

In one of my dishes, the Kokotxas, I incorporate pandan oil into the pil pil sauce in place of the usual parsley oil, because I have always thought of pandan as almost a Southeast Asian parsley. This is one example of how I incorporate my past influences from cultures outside of Basque cuisine and present it in a contemporary light.
That said, I don’t particularly adjust dishes for the Singaporean crowd. Firstly, it is because I want diners to be able to experience Basque cuisine in a way that is close to my heritage.
Secondly, I think Singaporean diners are generally well-travelled and eager to explore new cuisines and cultures, so rather than adapting the cuisine to fit the local palate, I think it is about encouraging them to develop a greater curiosity and genuine interest for the cuisine.
What ingredients from Basque Country do you use in your kitchen? How important is it to your dishes as well?

It is important for us that we use produce from Basque Country where possible, so that we can showcase more of the authentic and indigenous produce from the region. Even though there are certain limitations that make it challenging for us to source more than what we would have loved to, we have managed to source produce mainly from the sea – this includes fish like anchovies, red mullet, bonito and hake, all of which are commonly used in Basque cuisine. We also use the Jambon de Bayonne for our croquettes.

Basque Cuisine Michelin Guide Basque Kitchen Aitor Jeronimo
Jasmine Tay
Senior Writer
Jasmine Tay is the dining, culture and jewellery writer. She makes fine silver jewellery and causes mini-explosions in the kitchen when she can't afford fancy dinners. Sometimes she tells people what she thinks about art, and binges on the music of Danzig when they don’t agree.
Dining Culture Jewellery
Sign up for our newsletters to have the latest stories delivered straight to your inbox every week.