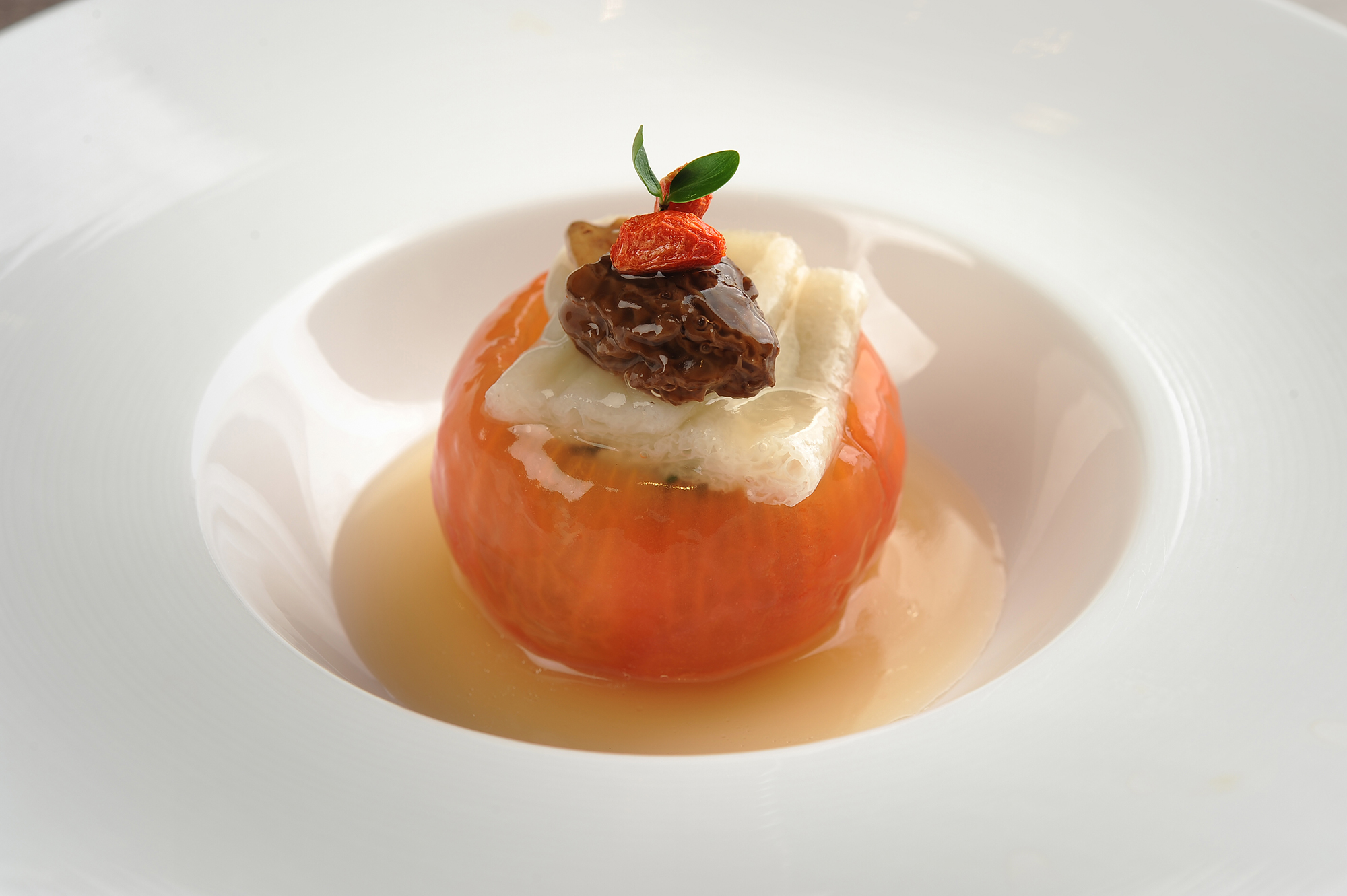 In a food-obsessed city like Singapore, culinary headlines can sometimes read like the stock ticker. Restaurants open and close, trends come and go and there’s always a chef somewhere pulling a rabbit out of his hat to enthrall diners. But do a quick scan and one would find that most of them sit firmly in the culinary encyclopaedia of the West – a major irony given that Singapore is home to a rich tapestry of Chinese food traditions.

Indeed, while there’s certainly no lack of upscale Chinese restaurants here, observers are quick to point out that the Singapore’s scene pales in comparison to the likes of Hong Kong. Young chefs in Singapore – the next generation of top minds — prefer to join Western-style establishments for the mobility and glamour they offer.

Hong Kong on the other hand, is home to the likes of Bo Innovation by “demon chef” Alvin Leung who invented the molecular xiao long bao and the three-Michelin-starred T’ang Court – a restaurant that many say is the last word on Cantonese fine dining.

But change is afoot. This month, Shangri-la hotel lays down its trump card: It has roped in chef Mok Kit Keung – the man who lifted the Hong Kong outpost of Shang Palace to two Michelin stars to helm the restaurant of the same name here.

Could the hotel be making a very real stab at garnering Michelin stars for itself and in effect, boost the cool quotient for Chinese restaurants and draw more talent? After all, even chef Mok himself notes that the Michelin Guide’s decade-long presence in Hong Kong has elevated the status of Chinese cuisine and evened out the playing field.

Hiring talented chefs from abroad who then go on to catapult the restaurant into stardom is not without precedent. When Ivan Brehm departed The Kitchen at Bacchanalia, Luke Armstrong who has worked at Michelin-starred names like Oud Sluis and The Ledbury took his place. In the 2017 edition of Singapore’s Michelin Guide, the Hong Kong street restaurant retained its stars. The same is seen at Iggy’s whose new head chef Aitor Orive breathed new life into the local institution which eventually bagged a star the same year.

But can chef Mok replicate such success?

We sit down with the man of the hour as he regales us with stories on the beginnings of his career, the importance of being proud of our own food culture and the difference between a Chinese kitchen from a Western one.

You’ve had a long career and you spent 20 years in Singapore before going back to Hong Kong. Tell us the story.

I started at 13 years old with my uncle who was a chef. He asked my parents: “How is my nephew? Is he interested in cooking with me?” My choice was to follow his footsteps. Then when I was 28, I got my first job in Singapore under the Tung Lok Group. After that, I ran my own restaurant for one year – the location wasn’t good so it closed. I joined Raffles Hotel, then the Suntec Convention Centre and the opening team for Marina Bay Sands where I was in charge of the whole casino.

A friend in Kowloon’s Shang Palace told me there was a position so I tried for executive chef. They told me they dropped a star. In 2009 they had two stars and in 2010 it went down to one. After I joined, I took the restaurant back to two stars which it has until now. I was quite happy because it’s teamwork.

You’ve had experience in both Singapore and Hong Kong. What’s the difference between the two cities’ Chinese restaurant scene?

Everything is different, I know the market here quite well but Hong Kong has the backing of Mainland China in terms of produce – fresh vegetables, live fish. Here? We have only have Chinatown [laughs]. But 70 per cent of the ingredients I bring in to Singapore are the same as Hong Kong.

For Singapore, you have other elements of Asia so it’s not just restricted to Chinese cuisine. In Hong Kong, its mostly Chinese cuisine but with Western elements.

Do you find that young people are more willing to join Western restaurants rather than Chinese restaurants?

Yes they prefer to join western restaurants because they’re popular. But in Hong Kong, the situation has improved because of the Michelin Guide. It elevated the status of Chinese restaurants and I hope to see more young people joining. I hope young chefs will try and learn traditional Chinese food. We are Chinese. We must [preserve] our food culture whether it’s Cantonese, Teochew or Hokkien style and let it shine across the world.

In terms of kitchen organisation and dynamics, how different is a Chinese kitchen?

It’s totally different. We have a wok station – we have five woks. There’s a boiling station to make soups, we have live fish tanks and someone to clean the fish. We have a dim sum station, a barbecue station to make peking duck and roast pork. It’s very different from a Western kitchen because they have stations like pastry, the cold kitchen, the garde manger.

What about the organisational structure?

It’s the same as Western kitchens but the names are different. There’s the assistant Chinese chef, barbecue head chef, the dim sum head chef. All these people can have up to four or five people. The dim sum side will also include the dessert team and the barbecue station will include the cold dishes. Over at the wok side, there will be the first wok, second wok and so on.

So in other words, even if an experienced chef from a Western kitchen were to work in a Chinese kitchen he will have to start from scratch?

Yes — the work is the same but the techniques and style are different.

What do you hope to do here? Are you gunning for a star?

First of all, I want the customers to get to know me here in Singapore. I would like guests to come in and leave with a smile – but also for them to come return. I tell all my staff to cook from the heart, everything from the ingredients to the timing and the tiniest details – the guest must feel that the dish is cooked with heart.

Let's talk about ingredients and quality. How do you hope to keep it the same as Hong Kong?

70 per cent of my menu, the dishes and the ingredients are the same. For example, when I head back to Hong Kong, I look for the same sea cucumber and bring it here. In Singapore, some suppliers bring in quality that’s a little lower compared to what we have in Hong Kong. I’ve been working with my suppliers in Hong Kong for a long time.

But whole live fish is an issue. In Hong Kong we get a lot of choice. It’s difficult here because we only get things like spotted garoupa and soon hock. The meat is the same, the wagyu we use is still from Australia and Japan.

Do you feel pressure to replicate your success?

[Laughs] Nope no pressure at all [laughs]. I enjoy my work.

Cantonese Cuisine Bo Innovation Kowloon Shangri-la Shang Palace Shangri-la Singapore Chinese Restaurants Singapore Michelin Stars Michelin Guide Hong Kong and Macau T'ang Court Michelin Guide Michelin guide Singapore Cantonese Food
Azimin Saini
Editor
Azimin Saini is the Editor of Lifestyle Asia and manages the team in Singapore. He has been told the sound of his backspace is like thunder through the clouds. On a regular day, he has enough caffeine in him to power a small car.
Restaurant Review Chef Interview Entrepreneurs