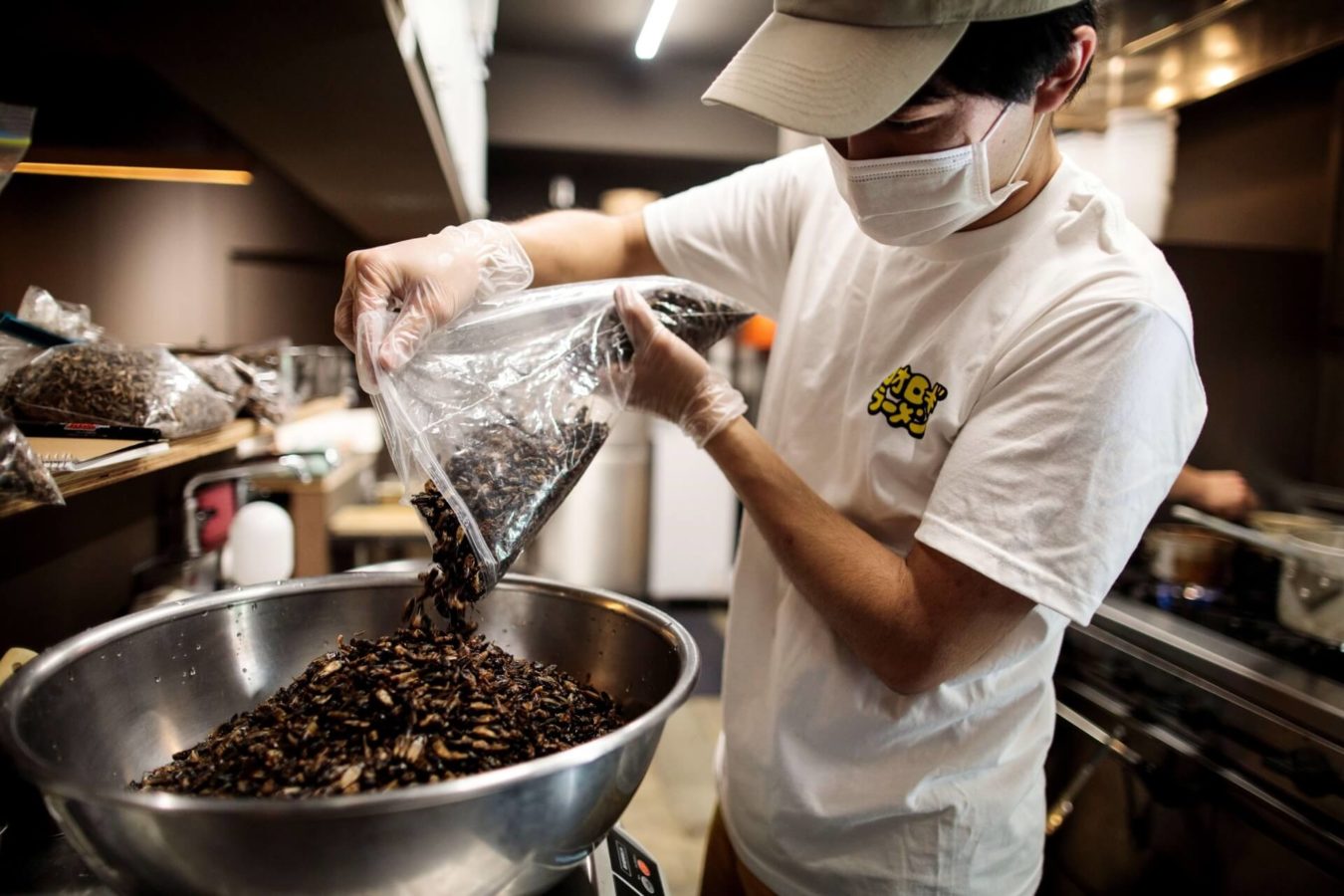 Cricket ramen? This Tokyo joint is serious about the joy of eating insects

Food & Drink
Cricket ramen? This Tokyo joint is serious about the joy of eating insects
Share this article
Next article

In a steamy Tokyo kitchen, a roasted scent wafts through the air as Yuta Shinohara prepares soup stock for ramen, derived not from pork or chicken, but crickets.

“In this pan, we have 10,000 crickets, making stock for 100 bowls,” Shinohara explained, as he stirred a large silver pot.

The bowls of ramen produced by Shinohara and his team look and smell like those at restaurants across Japan: fine white noodles sit in a savoury soup, topped with a juicy slice of pork and fat pieces of pickled bamboo shoots.

There’s little to give away the fact that 26-year-old Shinohara uses crickets in the broth, oil, soy sauce and even noodles. Except, that is, for the deep-fried insect perched next to a mitsuba leaf garnish on the soup’s surface.

Shinohara isn’t a professional chef, in fact his preferred description of himself is “earth boy.” And it’s his love of all things nature-related that led to him insect-based food.

“I want to introduce the joy of insect eating, so that insects will be respected equally to animals and plants,” he said.

Shinohara’s love affair with insects began as a child, when he spent most of his time in fields and bushes, catching grasshoppers and cicadas.

He was so fascinated by creepy-crawlies that he eventually even tasted them — but only secretly.

“I couldn’t tell anyone that I love insects or I eat insects until I was about 20 years old,” he says shyly. “I was afraid of becoming the odd one out or being bullied for it.”

Humans have been eating insects for thousands of years and they remain a common food in many countries in Asia, Africa, Latin America and Oceania. But for many in the West and elsewhere, a cultural bias against insects as food remains strong.

Environmental and agriculture experts have been trying to break down those barriers, promoting insects as an environmentally friendly rich source of minerals and protein. But while Shinohara is a strong proponent of eating insects, he dislikes the idea of bugs as a “last resort” food. He sees them instead as a delicacy that should be savoured.

Take phalera flavescens, for example. The moth’s white-tufted caterpillar is regarded as a nuisance in Japan because of its penchant for cherry blossom trees.

Shinohara however views the caterpillars as a treat.

“They are really delicious. They taste like a delicate Japanese sweet,” he said. “The caterpillar only eats the leaves of cherry trees, so they carry the scent.”

He is similarly fond of other caterpillars, including some that he says have a citrus flavour from their preferred trees. “Behind the flavour, you can imagine how the caterpillar savoured its life. That is so amazing.”

Shinohara and his team had planned to open an insect cuisine restaurant named Antcicada in downtown Tokyo in April, but were forced to put it on hold because of the coronavirus pandemic.

Instead, they have designed a pack of cricket ramen that can be cooked at home, and have sold 600 sets online as of mid-May.

“Thankfully, the latest batch sold out in three hours or so,” Shinohara said.

His team is also experimenting with a variety of other dishes including an insect-based version of a popular Japanese side dish called tsukudani, usually made from seafood, meat or seaweed simmered in soy sauce.

“We have tried different combinations of flavours to cook with these insects,” the 24-year-old said. “We found pistachio and cardamom go very well with silkworm cocoons.”

Kazuhiko Horiguchi, who ordered a ramen pack complete with whole fried cricket, said he was pleasantly surprised by the experience.

“It was a very unique flavour, the kind I like. I was very impressed,” he said. “I think many people can eat insects as food once they are cooked and served in dishes, even though they don’t want to see the insects in their original forms,” he said.

“Cricket ramen could be a starter for insect cuisine for many people.”

Shinohara has high hopes for a range of additional insect-based products, including beer made from crickets and a tea made from silkworm excrement.

“I see so much potential.”