Where to get the best curry puffs in Singapore

Most Singaporeans are familiar with the curry puff, a blistered golden-brown purse stuffed with spicy fillings of potato, fish or eggs — simple, yet heartwarming.

Available all-day round, this bite-sized treat is convenient as a quick snack for at a small price. While it has become a part of Singapore’s food identity, it is also reflective of global cultural influences from the colonial past.

The curry puff’s origins could be traced to Spanish empanadas or the British Cornish pastries. Despite the resemblance, the execution is largely different with local touches with spices and pastry. Since then, the curry puff has gone through several evolutions. The puff has become multi-racial — there’s the Malay ‘epok epok,’ the Indian ‘karipap’ as well as the Chinese ‘curry puff’ that most are familiar with thanks to snack food chains.

With just a dollar, Singaporeans can easily get a snapshot of the country’s diverse culinary landscape. The little golden package of goodness now also sees more modern fillings — think durian, yam or chilli crab — but the humble potato-and-egg combo is still beloved by all.

Here’s where to find the best curry puffs in Singapore. 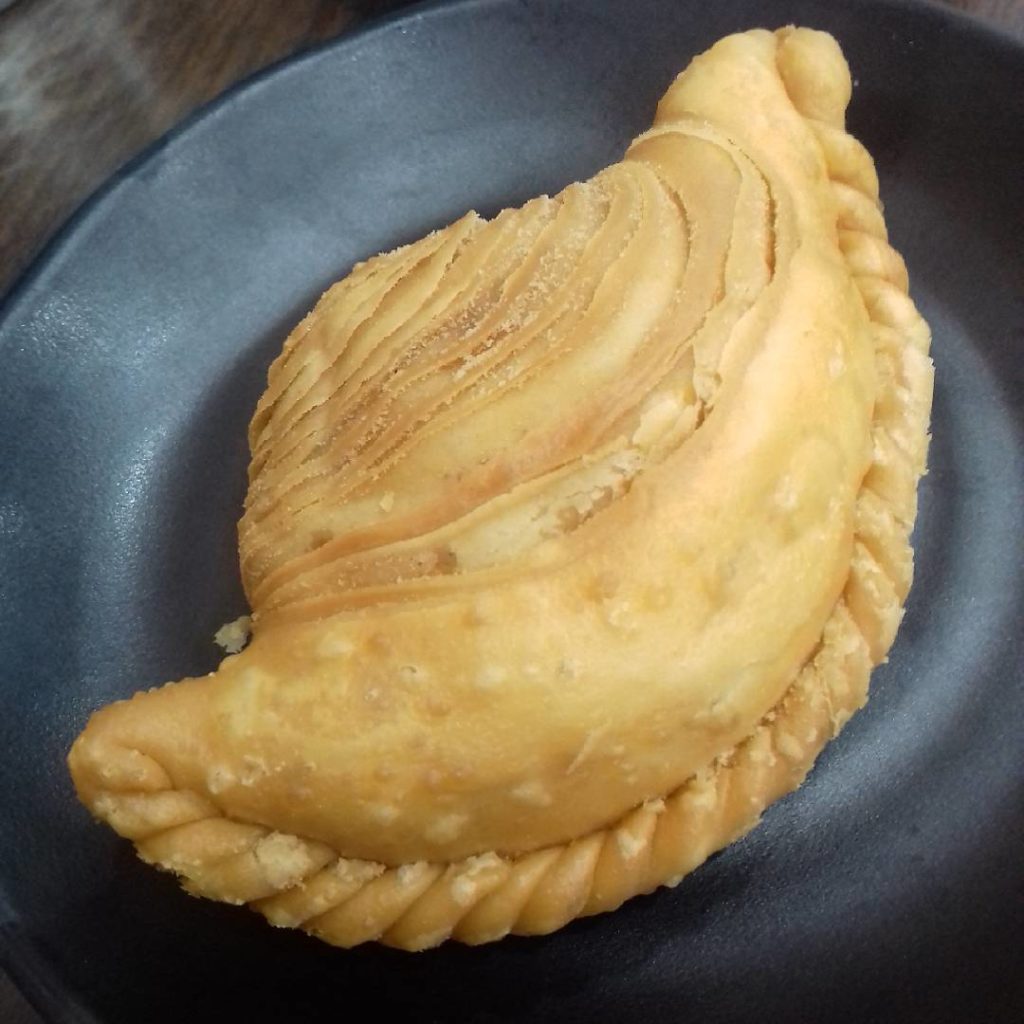 1
Soon Soon Huat Curry Puff
For over 27 years Soon Soon Huat has been frying up its unique take on the curry puff, which sports the signature multi-layered flaky skin. While the puffs are thin, they are stuffed to the brim with fillings. The curry chicken, for instance, has generous servings of diced chicken and hard-boiled egg within. The mother-daughter team have stuck to the same old recipe for its classic curry chicken, otah and sardine puffs. But over the years, Soon Soon Huat has introduced some ‘modern’ creations like custard and durian. 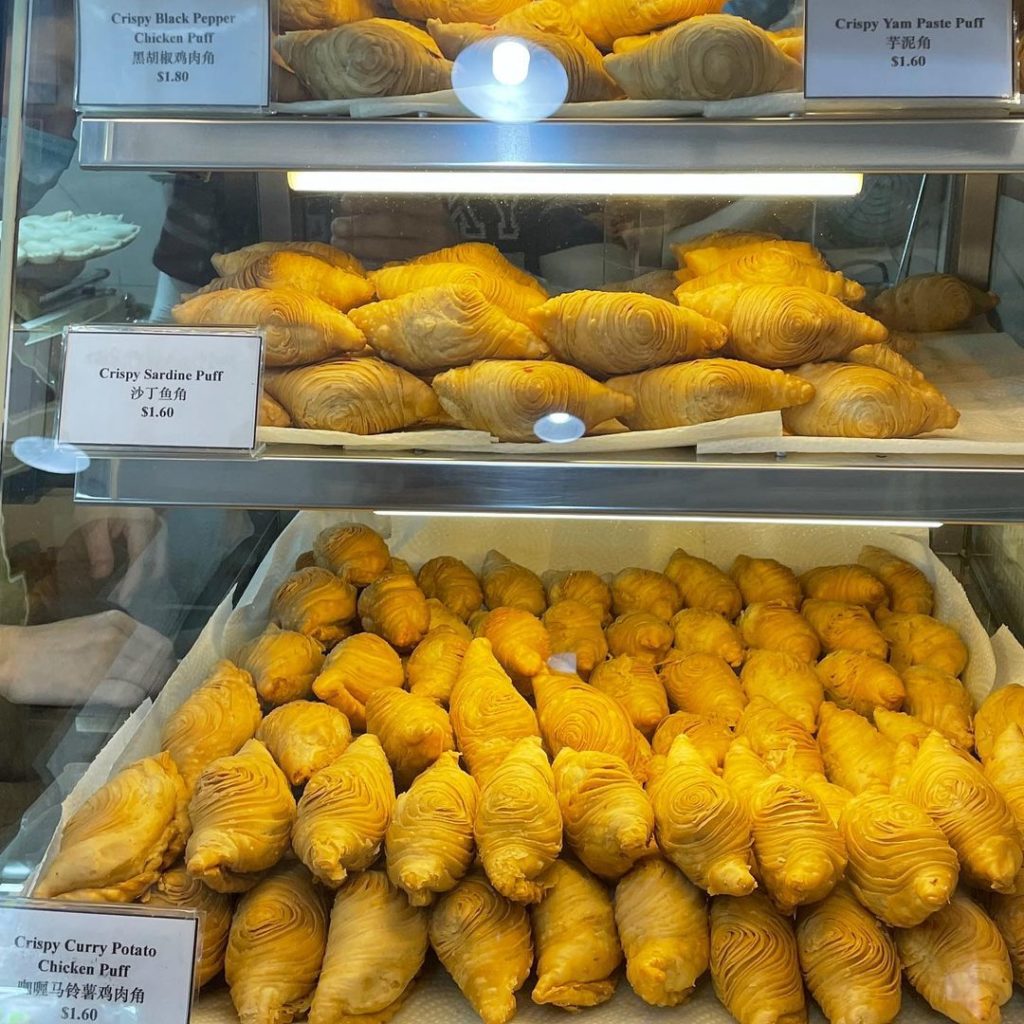 2
J2 Famous Crispy Curry Puff
Amoy Street Food Centre’s famous curry puffs have consistently been featured on the Michelin Guide’s Bib Gourmand list for good reason. Lee Meng Li and Wu Jing Hua, the couple running the humble hawker stall, make only about 500 puffs a day and fries them fresh in a large wok throughout the day. So diners are always guaranteed a piping hot treat to enjoy for breakfast or afternoon tea. The fillings are simple, but flavourful all the same. Curried potatoes and sardines with egg are often sold out, but newer creations like black pepper chicken and yam are proving to be as popular too.
(Image credit: @tanjongpagar_couple) 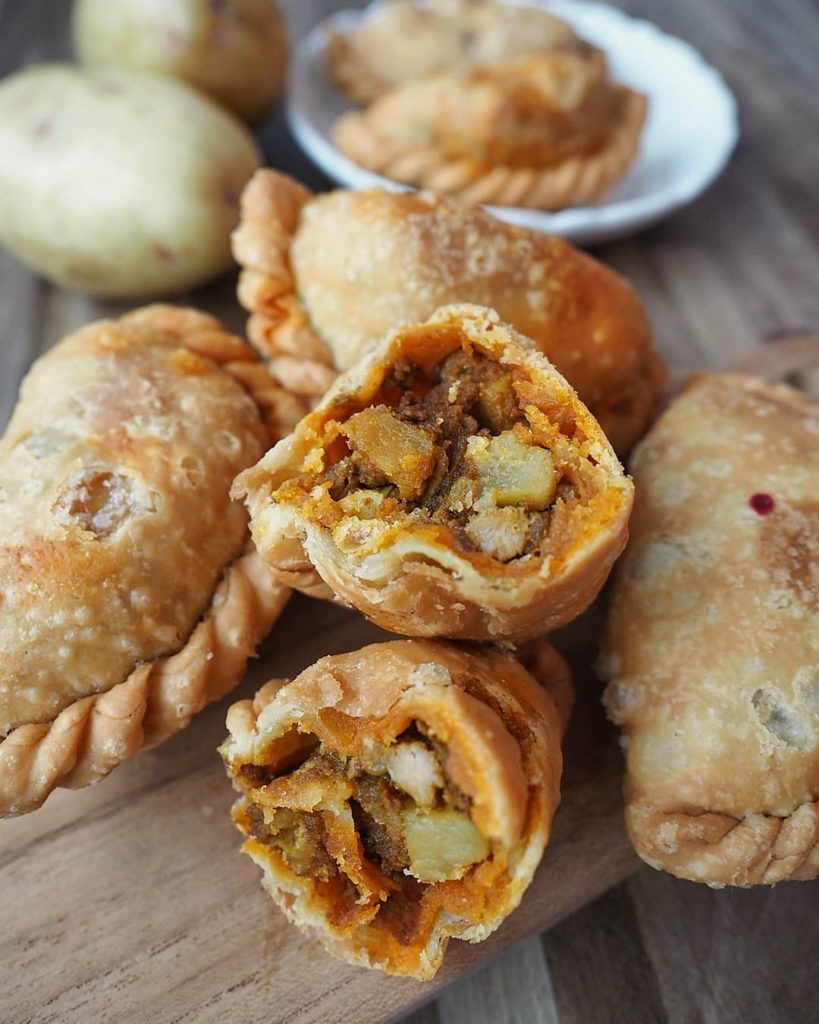 Fans of snack chain Tip Top Curry Puff will find the puffs at this hawker stall familiar. That’s because AMK Curry Puff is set-up by one of the Tip Top’s shareholders, holding on to the traditional ways of making the treat. The stall is run by former Tip Top employees who continues to fold and stuff every curry puff by hand. There’s only one filling available here, the curry chicken with hard-boiled egg — not too spicy, but still very satisfying. 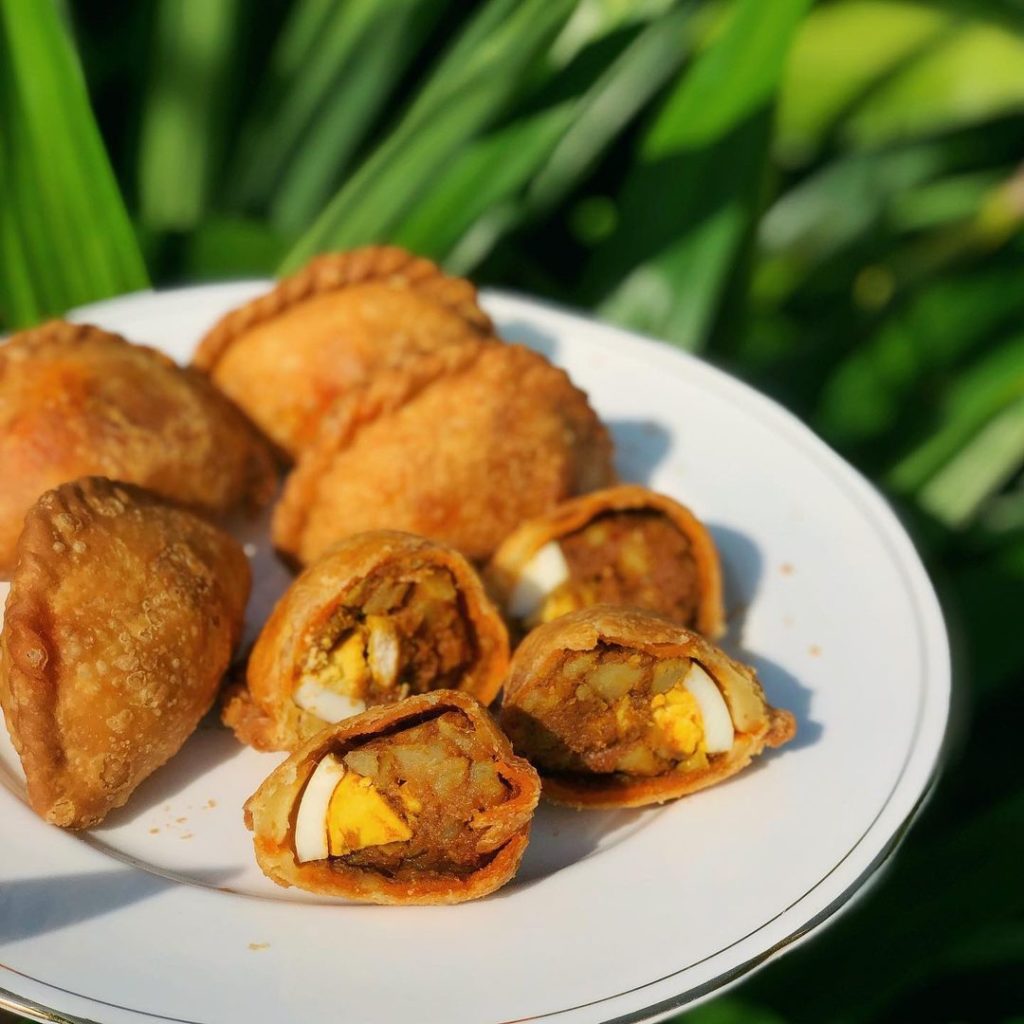 This popular stall, another Bib Gourmand listee, has been around for more than 50 years. Rolina’s curry puffs are more unusual in that they are smaller and thinner than most puffs, but holds more fillings. The Hainanese-style puff uses a more fragrant rempah to cook potatoes and chicken, making for a more satisfying bite. 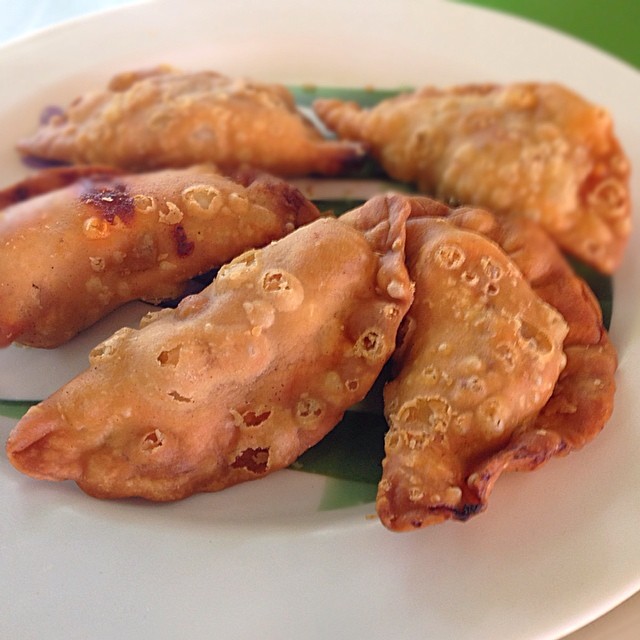 5
Epok Epok Central
As its name suggests, Epok Epok Central offers what’s better known as the ‘Malay-style’ of curry puff. The hawker stall continues to use an old family recipe for its nostalgic puffs, from its dough to fillings. The bite-sized puffs tend to be crispier and not as buttery and are available with three different fillings: spicy potato, sardine with onions or egg — all for less than a dollar. Also worth checking out is the stall’s nasi lemak which can be enjoyed with a couple of too.
(Image credit: @willcookwilleat) 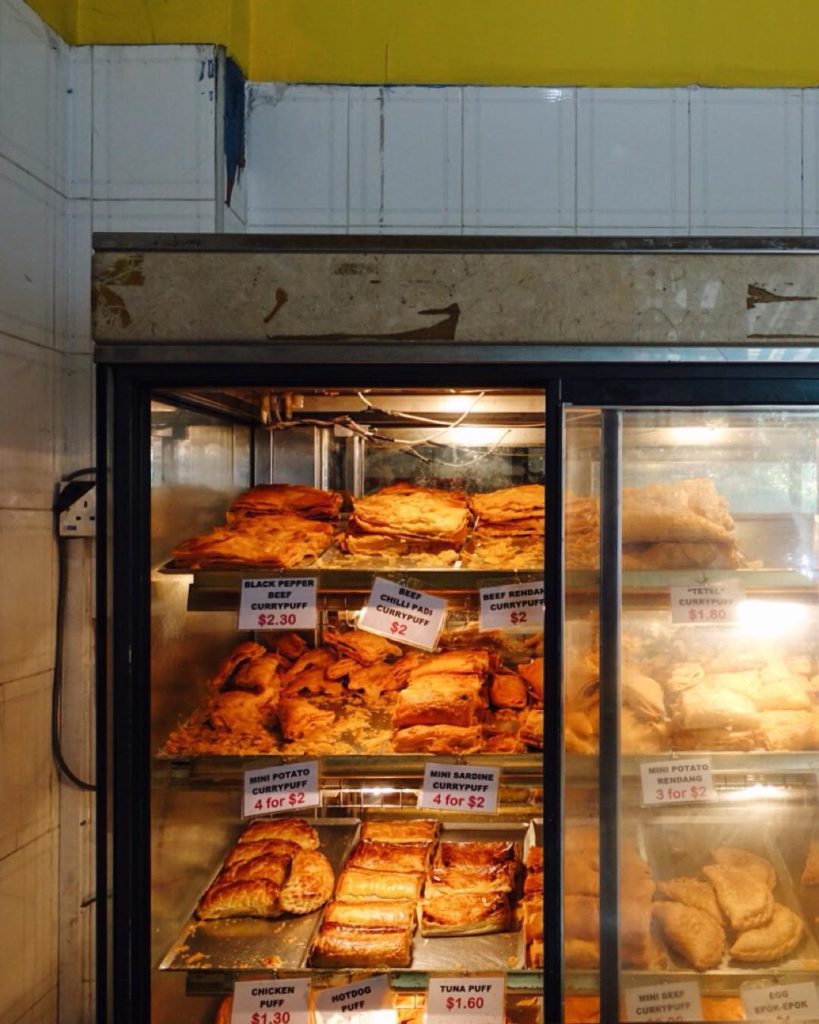 This Onan Road bakery offers two types of puffs, the karipap and the epok epok. The karipap is considerably different, a triangular treat with layers of thin pastry and spicy fillings like beef fat and rendang within. These are little spicier than the epok epok and curry puffs most are used too. The epok epok is also worth trying too, with potato, sardines or bean sprouts.

Bib Gourmand digital fashion
Jasmine Tay
Senior Writer
Jasmine Tay is the dining, culture and jewellery writer. She makes fine silver jewellery and causes mini-explosions in the kitchen when she can't afford fancy dinners. Sometimes she tells people what she thinks about art, and binges on the music of Danzig when they don’t agree.
Dining Culture Jewellery