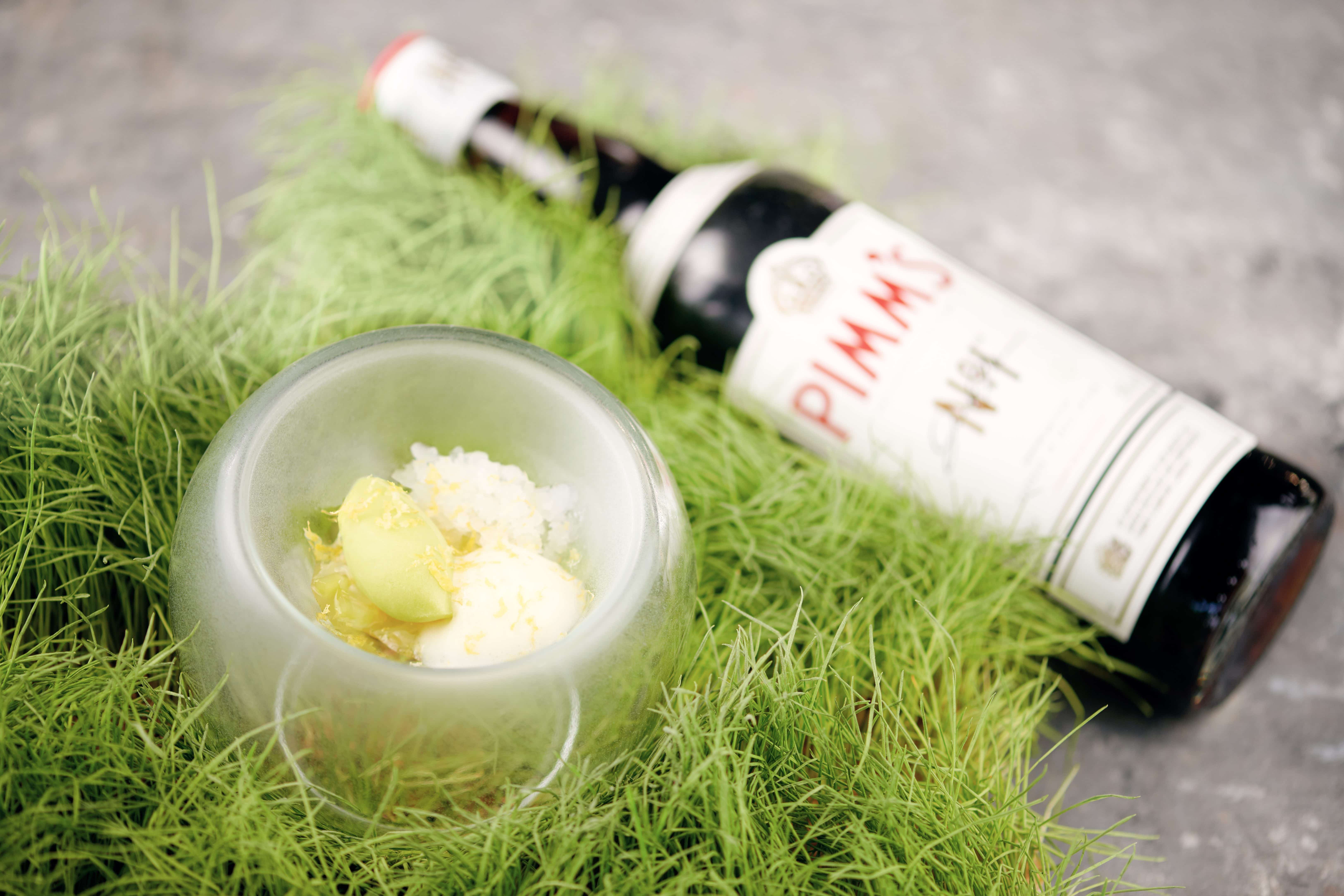 Jaan raises the Union Jack with its new British-inspired menu

Fresh from maintaining its one-Michelin-star accolade for the third year running, fine dining establishment Jaan has launched a new summer menu titled “Reinventing British”. True to its name, Jaan’s refreshed repertoire casts a spotlight on British-inspired dishes and ingredients — and steers the restaurant’s culinary focus away from its originally modern French roots.

Bold, innovative and delectable, Chef de Cuisine Kirk Westaway’s latest creations are testament that Jaan’s Michelin star is a well-deserved one. Here’s what you need to try from the new summer menu.

The new repertoire kicks off with an overture of four different snacks. Fish and Chips (bottom right) is Westaway’s spin on the traditional British dish, and comprises a crisp mini tartlet filled with a salty and velvety smooth brandade of cured codfish, capers, salted lemon, and Spanish vinegar. This is topped with a homemade tartar sauce and sprigs of parsley.

Another standout is the Chicken Curry (top right), created in a nod to chicken tikka masala’s role as one of Britain’s national dishes. Minced chicken is melded with garam masala, chilli and a variety of spices such as cumin, cinnamon and turmeric, before being slathered on moreish rice chips alongside dollops of mango chutney and egg yolk purée. Those who can’t take spicy food need not fear, as the snack only carries a faint tinge of heat.

The other two snacks include beetroot meringues (which are light, dreamy and dissolve almost instantly in the mouth) and a mainstay from Jaan’s previous spring menu — buckwheat pancake balls encasing Devon cheddar cheese.

Made with mushrooms, English potatoes, truffle trimmings and truffle juice, this delicious and earthy broth exudes a lovely, intoxicating fragrance. It’s also imbued with a dashi stock created using Scottish kombu flakes sourced from Mara Seaweed, a Scotland-based seaweed producer. Kombu is typically obtained from Japan, where it grows in abundance and is widely used in Japanese cooking. But Westaway deliberately imports his from Scotland, because of its saltier and more intense flavour. “Japanese kombu is great, but to use kombu from the UK is even more special for me, especially with the new focus in my menu,” he says.

Slurp up the soup with its accompanying side of a mini, flaky bread loaf paired with butter from Brue Valley farm in Somerset, UK.

Inarguably the most Instagram-worthy dish on Jaan’s new menu, the English Garden is a gorgeously and painstakingly plated course of over 30 different types of vegetables, flowers, herbs and condiments. Baby yellow carrots stand proudly on the platter, flanked by sugar snap peas and blobs of beetroot puree; while red oxalis leaves are scattered in between slices of cucumber and radish.Black olive sugar, anchovy dressing, and Ardonio olives are also thrown into the mix for a dash of saltiness.

The dish is inspired by Westaway’s childhood memories of growing up near the Devon countryside, where he was constantly surrounded by lush greenery and vibrant flowers. “It reminds me of home and what I did as a kid. I grew up vegetarian and ate organic produce all the time,” he says.

Every bite of the English Garden is packed with a burst of fresh and clean flavours, making it a guilt-free indulgence. The dish even comes with a tiny custom-made watering can containing a Scottish kombu and herb broth, which you can pour over the greens — just like how you’d water your plants.

Plump and succulent, the Scottish langoustine is poached in a vegetable-based blend of coriander seeds, star anise, dried fruits and peppercorns, which envelopes it in aromatic, sweet flavours. It’s matched with a stalk of blanched Italian courgette (a type of summer squash with a similar flavour and texture to zucchini) atop a combination of tangy Amalfi lemon purée and red pepper chutney.

This decadent concoction is rounded off by a risotto of courgette bits with parmesan, butter and vegetable stock, and a splotch of goat’s cheese curd from Neal’s Yard Dairy in England.

The main course of salt marsh lamb is another winner. Reared at the north coast of Wales, these lambs are left to graze on the marshes close to the sea, which naturally leads to them consuming the salt minerals, sea succulents, grass and flowers in the vicinity. This results in meat that’s tender and not too gamey, with a slightly salty taste profile.

The lamb is enjoyable on its own, but we recommend pairing it with bites of the barbecued aubergine on the side, which is deliciously smokey and adds dimension to the overall flavour. For those with a sweet tooth, the apricot and lemon purée also taste divine with the meat.

Pimm’s in the Park

Inspired by lazy summer afternoons at the park, this cool and refreshing palate cleanser comprises lemon granita resting atop a bed of orange pulp, diced cucumber, lemonade foam, and pomelo infused with Pimm’s — a quintessentially British liqueur. This is presented in a glass bowl, which arrives sitting in a mound of wheatgrass obtained from Jaan’s herb garden, alongside a poem penned by Westaway.

This deconstructed cheesecake dessert features juicy French Gariguette strawberries and strawberry jam on a cheesecake biscuit base. It’s crowned with a scoop of mascarpone sorbet, and embellished with almonds, sour pineberries (a variety of strawberries that’s known for its pale pink, almost white hue) and lemon verbena meringues. Gula melaka is also added to impart pops of natural sweetness.