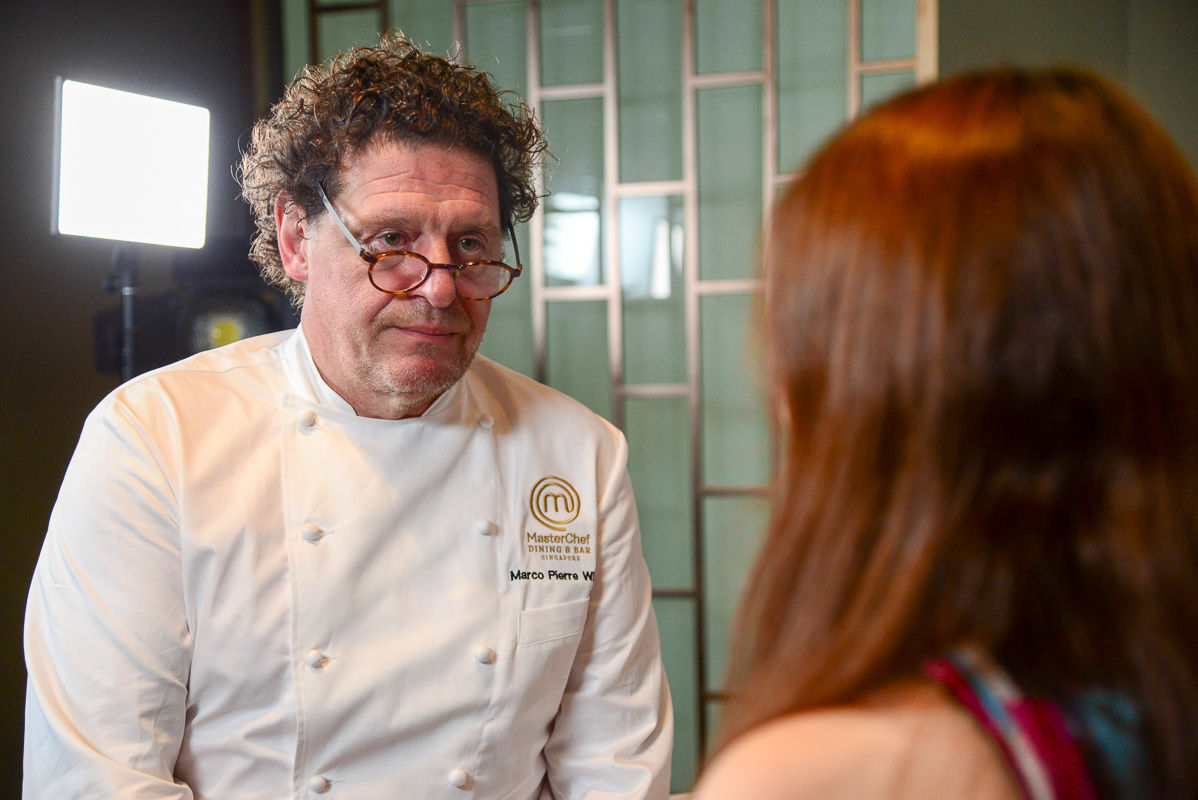 Local foodies will get a taste of British culinary legend Marco Pierre White’s food next year, when he opens his first Singapore restaurant. White made the shock announcement on Monday, at a press conference for pop-up dining event MasterChef Dining & Bar, which takes place from 25 November to 9 December, 2016. According to news reports, the 55-year-old chef plans to launch the eatery in June, in the Robertson Quay area.

White burst into the UK cooking scene during the ’80s, and at age 33, became the the youngest chef in the world to score three Michelin stars. He was also the first British chef to receive that accolade. His famous protégés include celebrity chefs Curtis Stone and Gordon Ramsay — the latter of whom he is famously not on speaking terms with. White retired from cooking in 1999, and currently runs restaurants across London and Ireland.

Standing at a towering 1.9m with a serious demeanour, White cuts quite an imposing figure. But during our interview with him, he was frank, down-to-earth and broke into a rare smile every now and again, especially while gushing about his favourite local food — chicken rice from Yet Con Hainanese Chicken Rice along Purvis Street. And yes, we did manage to dig into some details about his upcoming restaurant.

Lifestyle Asia (LSA): What are you currently working on?

Marco Pierre White (MPW): I have an old Victorian house just outside Bath. What I’m doing now is building a hotel there, which will have about 50 bedrooms when it’s finished. So that’s my real passion in England. And then I have my passion in Singapore, which is not a franchise or a management consultancy — it’s a business. It’ll be the sister business to the business in Bath, which launches next year. They’ll both have the same name.

LSA: And that business is the restaurant you’re opening in Singapore? Have you thought of a name for it?

LSA: What kind of food will the restaurant serve?

MPW: English. The kind of food I like to eat.

LSA: You’ve visited Singapore many times. What is your favourite local food?

MPW: I’ve been here six or seven times this year. I love the food and I like the hawker centres. Every so often I crave chicken rice, so I eat it two or three times a week. I go to see the old man in Purvis street, who’s been there since 1940. I’ve been there four or five times in the last two weeks. Sometimes I have a little bit of the offal — the hearts and liver — which is delicious. I like watching [the chefs] chop up the chicken in the window. It’s real, it’s honest.

LSA: What was the last meal you had that really surprised you?

MPW: The thing that surprises me most in Singapore, is that when you buy Peking duck, they give you the crispy skin, and then they take the duck away. So I make them give me the whole duck. They look at me a little bit strange, but I make them take all the meat off the duck.

LSA: But you can request to have your duck meat cooked with rice or noodles.

MPW: But they charge you for it, so you buy the duck twice. I just eat the duck skin with its meat. So I only pay once, but I get the whole duck.

LSA: Which restaurants do you frequent in Singapore?

MPW: Asia Grand for dim sum, Purvis Street for chicken rice, Eat First [along East Coast Road] and Tao [at Asia Square Tower 2]. The latter is family-run and has just really good food. I like to go where Singaporeans go. Let’s not forget, the restaurant scene is a very big jigsaw, made up of lots of little places. And that’s what makes the world of gastronomy magical.

LSA: How do you find the world of dining has changed over the years?

MPW: The world has changed, not just restaurants. The people’s wants have changed. In the world I came from, which was a very humble world, we never went out for dinner. We ate at home all the time. We were too poor. Today, you see the working man has many aspirations. He wants to go on holiday, he wants to dine in restaurants. If you go back 30 years ago in Singapore, how many restaurants were there compared to today? Or even food outlets? A lot of people work now, and they eat out. Even if it’s just in a simple café.

LSA: What about the kitchen scene? Do chefs these days have it easier?

MPW: Well, you’ve got to understand: When I was a boy and I went to work, it was a job with no aspirations. Today, people go to kitchens for different reasons. They want to make a career of it. And that’s the difference. My passion [for cooking] started at 17. I was very lucky, I got a job at [Le Gavroche], a restaurant with two Michelin stars, near my home. In those days in Britain, there were only four restaurants with two Michelin stars, about eight or nine one-starred restaurants, and no three-starred restaurants.

LSA: Back in the day, you weren’t on speaking terms with some of the other chefs in the industry. Have you tried reaching out to any of them?

MPW: It’s very simple. If someone can’t enrich your life, and you can’t enrich their’s, why would you want them to be part of your life? Think about it. As we evolve and develop, we become different people. People whom I [was friends with] thirty years ago — I have nothing in common with them today, apart from the time that we spent together. We do things for different reasons.

LSA: Outside of work, how do you spend your time?

MPW: I work outside of England, and England’s my home. I don’t work in England. Where I live is a farm. So if I go back to England for 30 days, I stay on my farm [the whole time] and never leave it — no one sees me. And then I come back out to work. I go to America, the Middle East, Singapore and Australia.

LSA: How do you unwind at the farm?

MPW: I don’t unwind. I work, with my animals and building my hotel. I never stop working. I don’t believe in days off or holidays. I work seven days a week, because I expel as much energy as I would if I didn’t work. So for me, it’s always about making and creating things.

Celebrity Chef InterContinental Singapore Ash & Elm MasterChef MasterChef Dining & Bar Marco Pierre White The English House Marco Pierre White Singapore Restaurant
Sara Yap
Deputy Director, Digital Operations (Asia)
Sara Yap is the Deputy Director of Digital Operations at BurdaLuxury, and a contributing writer to Lifestyle Asia’s dining and jewellery beats. When she’s not on the lookout for exciting new restaurants or bejewelled trinkets, she’s probably buried in a riveting read, or reminiscing the good ol’ days with her favourite playlist of ’90s boyband hits.
Dining Pass the Salt Jewellery On The Rocks
Sign up for our newsletters to have the latest stories delivered straight to your inbox every week.