Home > Food & Drink > Dining > Gold digger: All you need to know about truffles 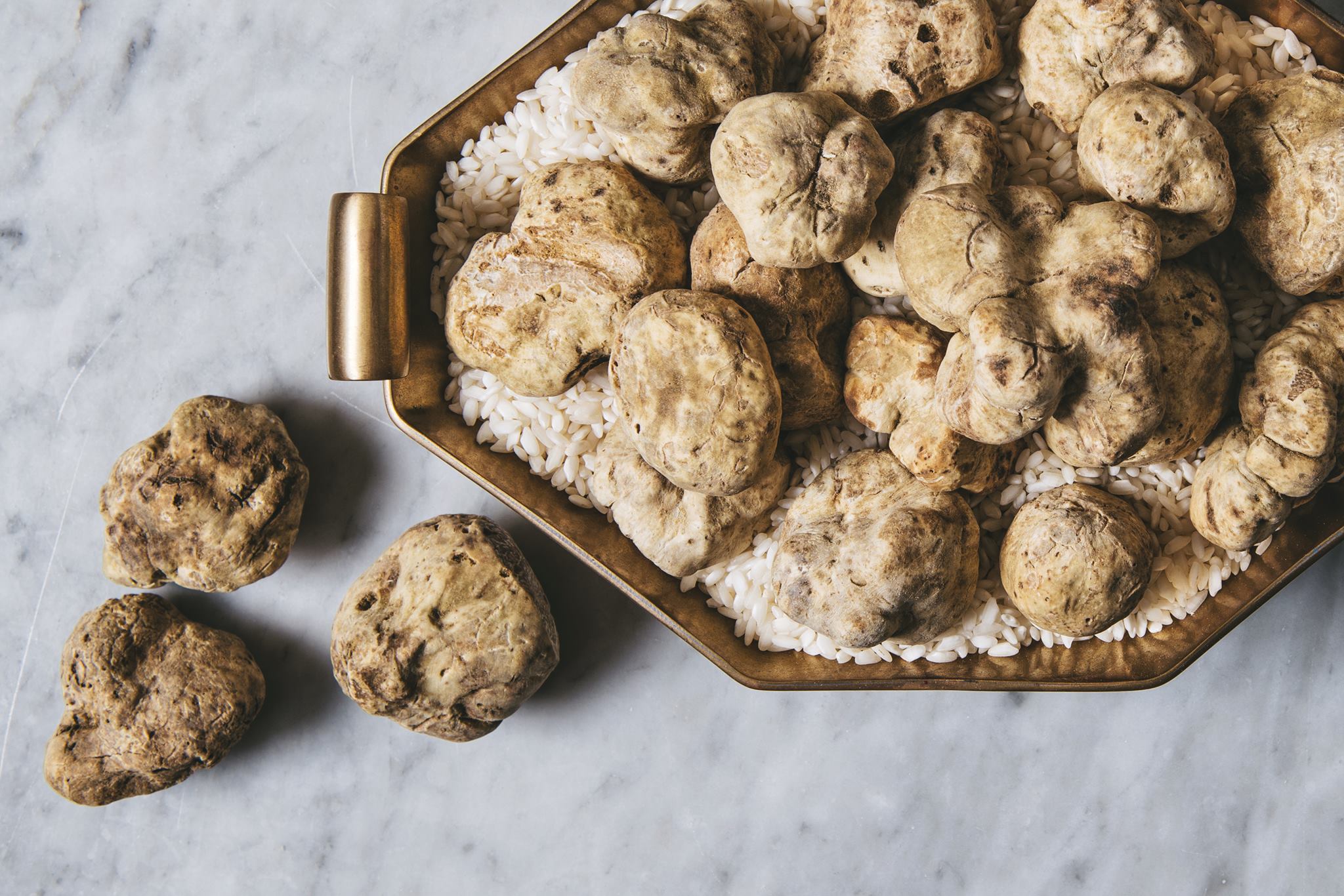 Gold digger: All you need to know about truffles

If first impressions are anything to go by, the truffle isn’t exactly the most aesthetically-pleasing food. Its dull-coloured, knobbly and lumpy exterior resembles a clump of mud, and the fact that it’s basically a form of fungus — along with microorganisms such as molds — doesn’t exactly make it any more attractive.

Despite all these unflattering characteristics, the truffle remains one of the most celebrated — and expensive — delicacies in the world of gastronomy. Earlier this month, a Beijing restaurateur made headlines when he spent an eye-watering US$112,000 (S$159,644) on a large 2.5-pound (1.13 kg) white Alba truffle at the 17th annual World Alba White Truffle Charity Auction held simultaneously in Philadelphia and Piedmont, Italy.

What distinguishes a truffle from any other fungus or mushroom, is its earthy fragrance, which perfumes any dish and makes it suddenly seem a gazillion times more exotic and appealing. And there’s its nutty, woody taste, which easily adds a new and intriguing flavour dimension to food. But what exactly makes truffles so coveted and pricey?

How does your fungus grow?

Perhaps, one factor is the challenge in farming them. Typically found in Italy, France, Australia and Spain, they can only be cultivated underground and grow from spores living among the roots of oak, hazelnut and chestnut trees. The truffles and trees share a symbiotic relationship: The fungi obtain nutrients from the soil for the tree and, in turn, the trees provide carbohydrates that nurture their growth.

Another reason for truffles’ steep prices, is the difficulty in harvesting them. As truffles are buried too deep in the earth for the human eye to see, truffle hunters in France, Italy, Croatia and the US have to enlist the help of specially-trained dogs and pigs to sniff them out. It’s interesting to note that pigs are particularly attracted to truffles, because the fungi’s aroma is similar to that of hogs’ pheromones.

The whole process of searching for truffles is a laborious and unglamorous one: Foragers often set off for the forests, valleys or mountains before dawn, hiking through rough terrain. The dogs and pigs are then sent out to find the truffles. The moment a truffle is detected, the hunters have to rush to the site before the dogs or pigs unearth and eat it. Extracting the truffle is also a messy affair, as hunters have to manually dig in the mud and soil.

Truffles are usually associated with their ubiquitous black varieties, but there are actually many different types. These include white truffles, which can be obtained from Alba, Piedmont and Tuscany in Italy between October and November, and black winter truffles — which are found in Spain, France and Italy from November to February. As for the usual black truffles, they are sourced from Périgord, France in late autumn and winter.

Other distant varieties include desert truffles, which can be harvested in the deserts of North Africa and the Middle East. These grow from spores under the sand surface, and taste similar to mushrooms. They are also more affordable and can be purchased from markets in Syria.

It is not exactly known who was the first to randomly dig up a truffle, and decide it was a good idea to bite into it. But it’s believed that people have savoured truffles since the beginning of time, with the ancient Sumerian civilisation of Southern Mesopotamia being among the first to incorporate it in their diet over 3,000 years ago. Ancient Romans, Greeks and Egyptians were also enamoured with the prized fungus, with the latter eating them with goose fat.

Early philosophers such as Pliny the Elder and Plutarch of Chaeronea were fascinated by truffles, too. Pliny’s 77 AD encyclopaedia, Natural History, for instance, marvels at how truffles appear to grow underground without roots and are “connected by no fibres, not so much as a single thread even, while the spot in which it grows, presents neither protuberance nor cleft to the view”.

A number of writers and poets even came up with wacky theories about the fungus: Theophrastus, a disciple of Aristotle, suggested that it was created by thunder and lightning, while Juvenal thought it was the result of a thunderbolt sent by the Roman god Jupiter towards an oak tree. Convinced that the truffle had aphrodisiacal properties, physician Galen of Pergamon prescribed it as medicine for his patients, stating that it was “very nourishing, and [caused] general excitation, conducive to sensual pleasure.”

The truffle temporarily fell out of favour during the Middle Ages, when some people thought it was linked to the devil or witchcraft. Its odd, ugly appearance seemed contradictory to its fragrant smell, delectable taste and fabled aphrodisiacal qualities, hence igniting suspicion towards it.

Thankfully, the truffle was once again embraced in the Renaissance period, when nobles and royalty in France and Italy introduced it to their tables. It is believed that Louis XIV, Emperor Claudius and Napoleon were among those caught up in truffle mania. By the 1700s, royals in Piedmont were organising truffle hunts for palace guests and foreign dignitaries.

The truffle’s popularity has only grown over the years, and it’s beloved by both fine dining and casual restaurants all around the world. Recent years have even seen eateries adding it to all sorts of food including mac and cheese, noodles and ice cream.

Celebrity chefs sing its praises, too. On a 2011 episode of television show No Reservations, American chef Anthony Bourdain visited the famed elBulli restaurant in Spain, and gushed over a dish sprinkled with black truffles: “This dish, I feel guilty… Guilt tastes good. I’m going to hell.”

Australian chef Curtis Stone adores it so much that he has created an entire set menu based around black truffles. The menu will be available for the whole of this month at his Los Angeles restaurant Maude. Maude is known for changing its menu every month, with each repertoire dedicated to a specific seasonal ingredient. In November, its repertoire focused on dishes incorporated with white truffles.

“From the first time I smelt a white truffle, I was like ‘Oh, what do we have here?’ I was working in one of Marco Pierre White’s restaurants and I can remember the truffle man coming in, opening the box. And that was it, I was completely drawn in,” said Stone in a statement on his restaurant’s website.

Even some of Tinseltown’s stars are drawn to the aromatic fungus. Talk show host Oprah Winfrey loves its taste so much, she carries a bottle of truffle salt around so she can lace her food with it. Actress Catherine Zeta Jones washes her hair with a shampoo containing caviar and — what else — truffles, and rapper P Diddy once demanded that celebrity chef Daniel Boulud “shave that b****” on his food, when Boulud brought a truffle to him for inspection.

Closer to home, many restaurants here have also jumped on the bandwagon. In July, Stellar at 1-Altitude launched a Truffle Constellation eight-course repertoire, which incorporated Manjimup winter truffles from Australia, and on 9 December, Osteria Mozza will serve up a dinner menu pairing white truffles with Barolo wines. If you can’t wait till then, Italian eatery Casa Tartufo offers a truffle-centric menu throughout the year.

The allure of truffles has also spawned the creation of truffle oil, which, contrary to its name, doesn’t contain actual truffles. These oils mostly comprise olive or sunflower oil mixed with flavouring, and are significantly cheaper than the real deal. Not all chefs are crazy about it, though. In a 2011 episode of MasterChef, Gordon Ramsay criticised a contestant who added truffle oil to her dish, proclaiming it “one of the most pungent, ridiculous ingredients ever known to chefs”.

Love them or hate them, truffles are here to stay. Recent years have even seen the emergence of truffle festivals, so its devotees can spoil themselves silly with the revered, tasty fungus. Upcoming events include the Oregon Truffle Festival in the US from 20 January to 29 January, 2017, and the Black Truffle Festival in Umbria, Italy — which takes place from 22 February to 26 February, 2017.

As aptly summed up by Alexandre Dumas, the writer behind seminal literary works such as The Count of Monte Cristo and The Three Musketeers, “The truffles themselves have been interrogated, and have answered simply: Eat us and praise the Lord.”

Food Dining Gordon Ramsay Stellar at 1-Altitude White Truffles Black Truffles Truffles Marco Pierre White Curtis Stone Maude Truffle Hunting Truffle History Truffle Origins
Sara Yap
Deputy Director, Digital Operations (Asia)
Sara Yap is the Deputy Director of Digital Operations at BurdaLuxury, and a contributing writer to Lifestyle Asia’s dining and jewellery beats. When she’s not on the lookout for exciting new restaurants or bejewelled trinkets, she’s probably buried in a riveting read, or reminiscing the good ol’ days with her favourite playlist of ’90s boyband hits.
Dining Pass the Salt Jewellery On The Rocks
Sign up for our newsletters to have the latest stories delivered straight to your inbox every week.