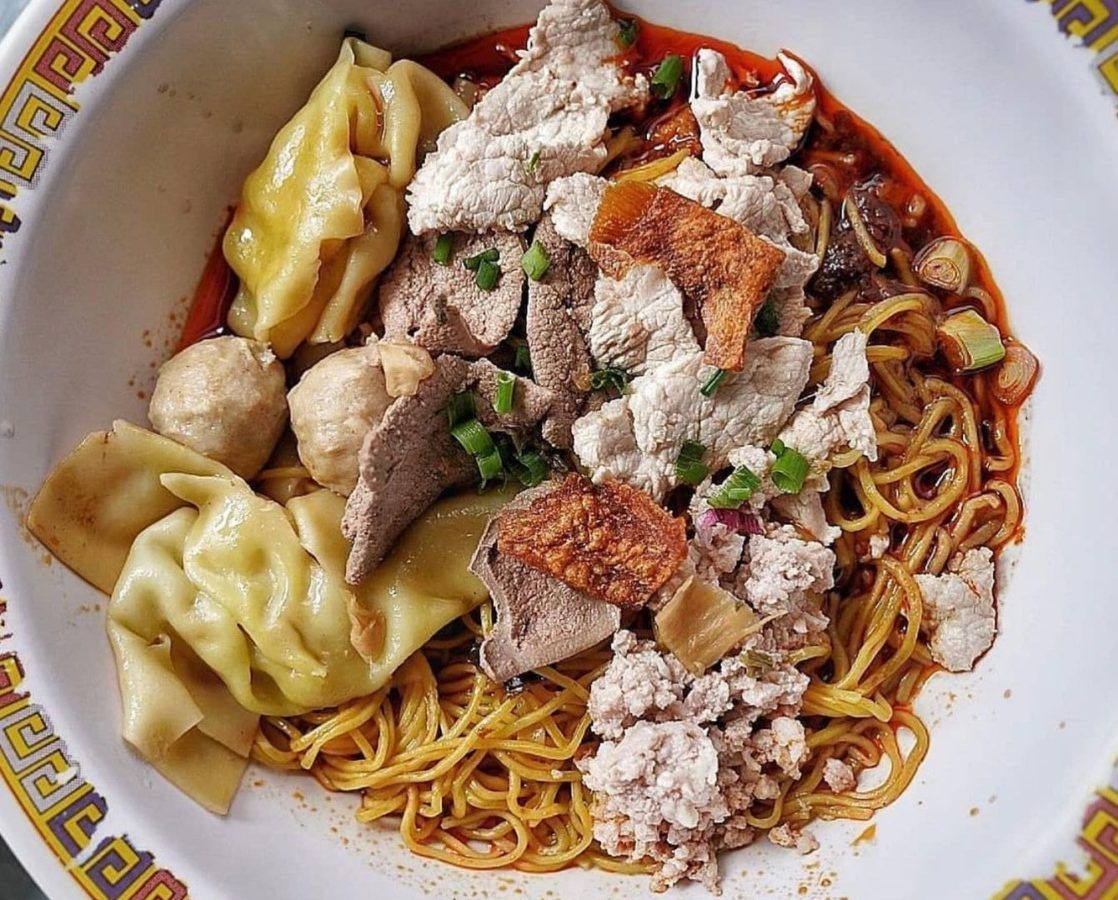 Bak Chor Mee, or minced meat noodles for the anglicised reader, is a popular hawker noodle dish that is found almost exclusively in Singapore, Malaysia and several regions in the Guangdong province in China.

The origins of the humble bowl likely stemmed from the Teochew community, and stripped to its bare minimum, it is quite literally bak chor (minced meat) and mee (noodles). The dish is a little different depending on which country you’re dining in, but in Singapore, bak chor mee can be categorised into two versions: soup or dry.

The soup variant is a test of the chef’s skill in broth making: the clear, light-tasting soup is littered with a cloudy mix of minced pork and fats, the perfect accompaniment to the thin eggy yellow noodles. Meatballs and a healthy scoop of chopped chilli slices garnish the noodles for a warm, spicy bowl great for colder days.

As for the dry variant, the secret ingredient lies in the chilli-vinegar sauce. Thick, wavy mee pok noodles are tossed this special sauce, laying the foundation for juicy slices of stewed mushroom, minced pork and glorious pieces of deep-fried lard. Other additional ingredients like pork liver, wontons, and fish balls vary from stall to stall.

You might also like…
Food & Drink
The ultimate guide to heritage hawker food in Singapore and where to find them
Food & Drink
Where to eat in Joo Chiat, a heritage gem in eastern Singapore

We don’t know about you, but we’re salivating just thinking of these moreish bowls.

Read on for the list of stalls that are serving the best bak chor mee in Singapore: 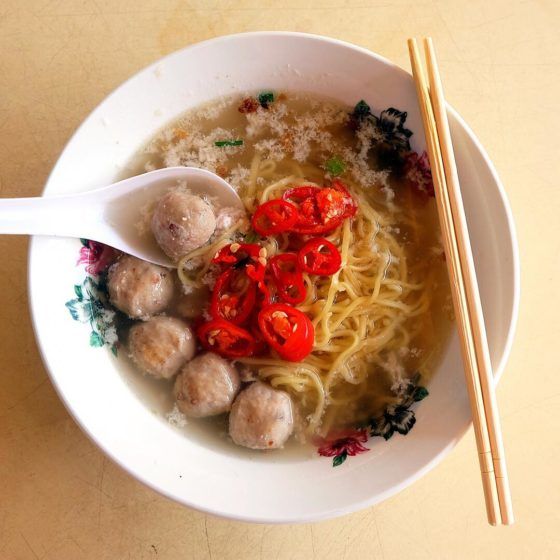 Easties will definitely be familiar with this stall, located at the beloved Bedok 85 Fengshan Market & Food Centre. These delightful bowls come with springy noodles and a flavoursome broth, and the aromatic fried garlic bits on top make the dining experience a mouthwatering one for sure. Make sure to stop by during non-peak hours, otherwise, expect a snaking queue. 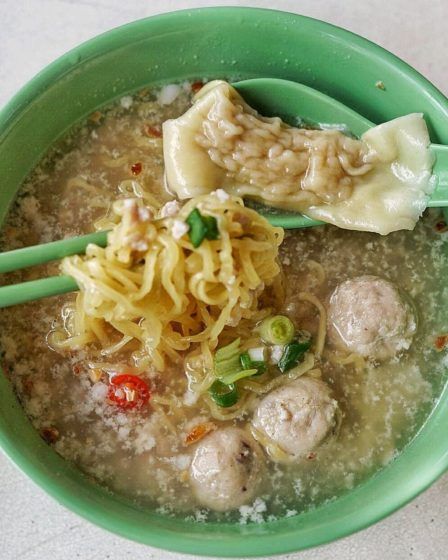 If you’re craving for a bowl of Bak Chor Mee in the CBD, get your fix at Soon Heng Pork Noodles in Tanjong Pagar. The broth here is pleasantly light and easy on the palate while staying true to the meaty flavour of the pork, and they’ve also added a couple of silky meat wontons in the soup as an extra ingredient as well. 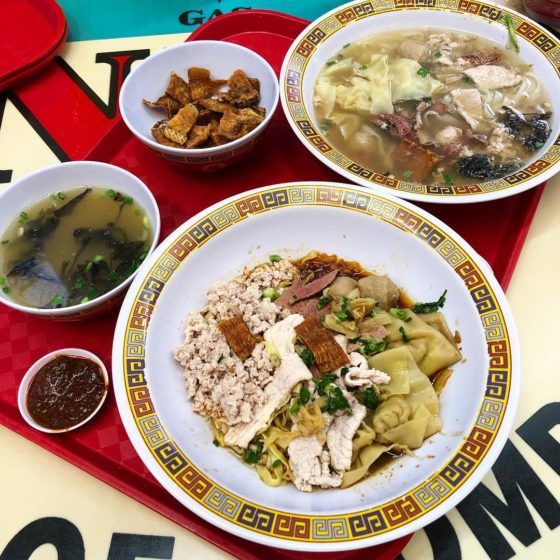 Hill Street Tai Hwa Pork Noodle was popular amongst those in the know, but after consistently earning a Michelin Star from 2016 to 2021, the fanbase of the humble stall has definitely multiplied. Here, find vinegary bowls of dry mee pok perfectly complemented by perfectly cooked slices of pork and liver. The crunchy pieces of fried sole fish give the dish a lot more texture than other stalls out there, and the dumplings also add a distinctive bite to the dish. Be warned: the queue here can be as long as 90 minutes during peak periods. 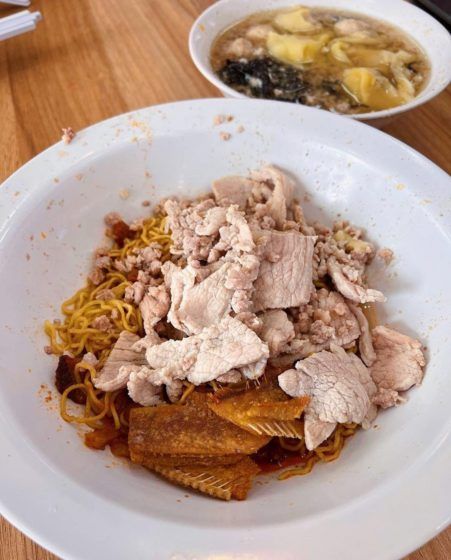 Although often mistaken for its Michelin-starred competitor above, Tai Wah Pork Noodle is just as commendable when it comes to bak chor mee, especially when it’s also been awarded the Michelin Bib Gourmand. Here, expect a base laced with a delicious mixture of vinegar, soy sauce, and chilli, all of which coat the springy noodles and minced meat, tender pork slices, and liver. The soup is just as flavoursome here; expect a hearty serving dumplings, meatballs and seaweed to come with. 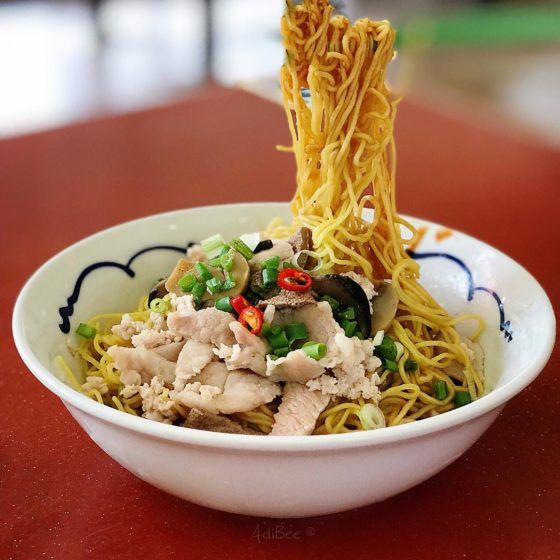 More fondly referred to as Taman Jurong BCM, 58 Minced Meat Noodle is famous for their thick, robust pork broth that’s full of garlicky goodness. Apart from springy noodles cooked al dente, find a generous serving of pork lard sprinkled on top for an aromatic experience unlike any other. Similar to other stalls, 58 Minced Meat Noodle will serve a bowl of the warm, meaty soup on the side if you order the dry variant so that you won’t miss out on its mouthwatering broth. 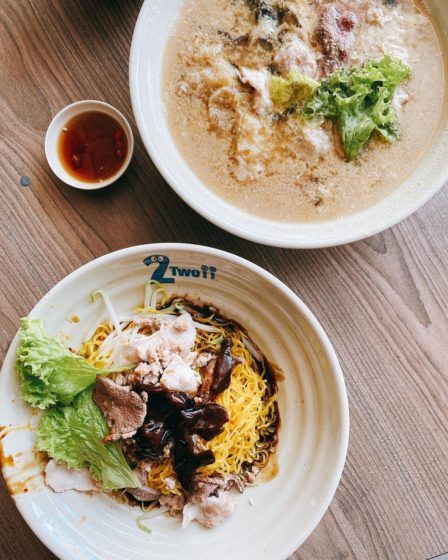 Nothing says comfort food more than a steaming bowl of Bak Chor Mee soup, and the one at Seng Kee Bak Chor Mee proves to be one of the best ones yet. The thick, almost gelatinous soup is laden with generous servings of minced pork, tender pork liver and silky smooth fish maw. Even their sliced mushrooms are full of flavour: they are braised for at least four hours to a perfect savoury-sweetness that cannot be recreated elsewhere.

Address
9A Serangoon Garden Way, #01-37, Singapore 555945
Website here
Hawker Food hawker eats heritage food #LoveYourLocalSG Bak Chor Mee
Jocelyn Tan
Senior Writer
Jocelyn Tan is a travel and design writer who's probably indulging in serial killer podcasts or reading one too many books on East Asian history. When she actually gets to travel, you can find her attempting to stuff her entire wardrobe into her luggage. Yes, she's a chronic over-packer.
Travel Design
Sign up for our newsletters to have the latest stories delivered straight to your inbox every week.