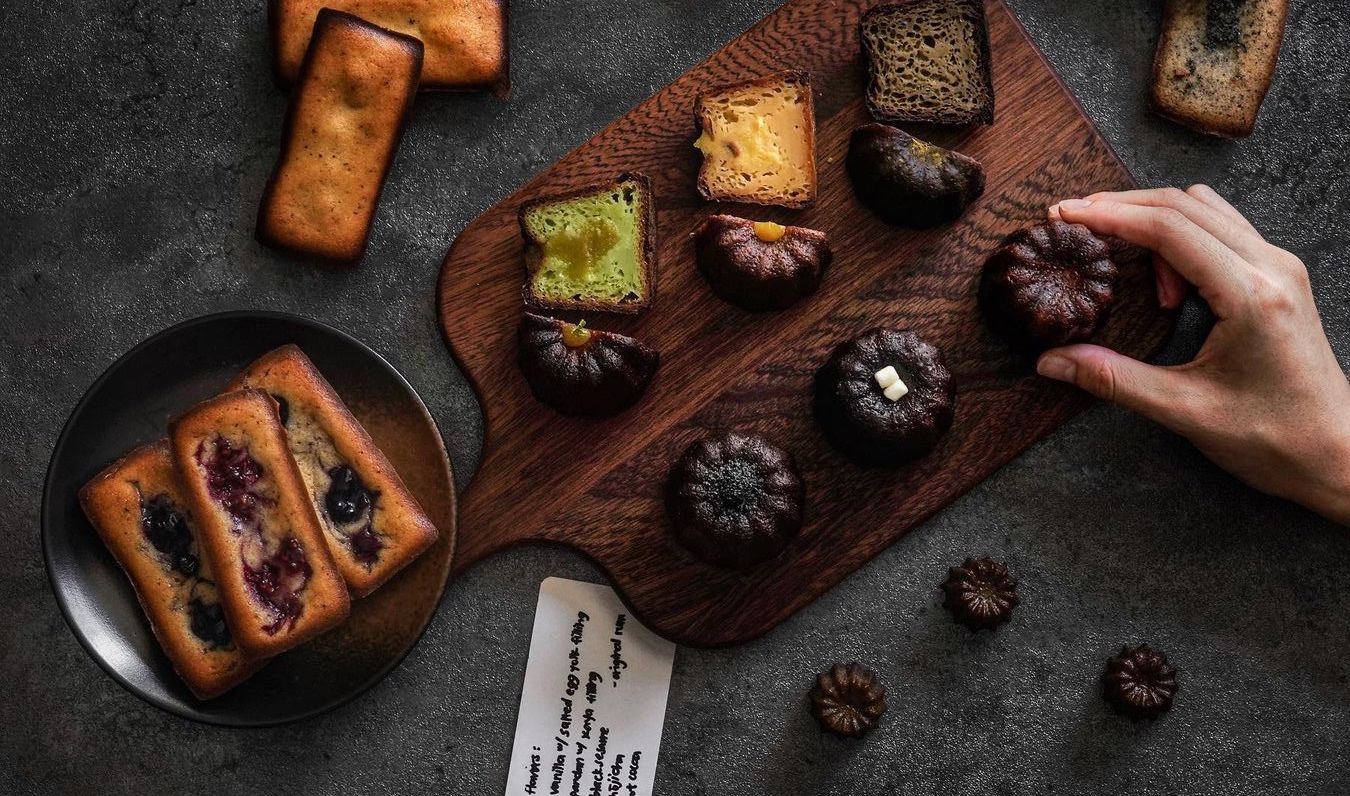 Of the endless list of French sweets, macarons, profiteroles, and crepes probably come to mind first. But canelés? Perhaps you’ve only heard of them.

Those who’ve had the chance to try these beautiful brown treats, however, would attest that they’re quite the addiction. We think it’s the winning combination of the dark, thick caramelised crust and moist custard centre, or perhaps it’s the rum and vanilla flavours that it’s usually laced with. Either way, we’re hooked.

In comparison to other French pastries, canelés aren’t as easy to find in Singapore, so we’ve taken the liberty to compile a list of places you can grab the best ones at.

Below, all the bakeries to get the best canelés in Singapore: 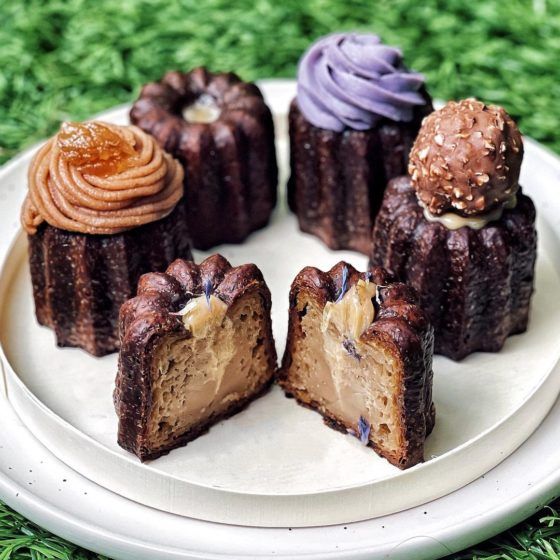 Flourcrafts Pâtisserie is where you’ll find some seriously interesting sweet treats. Founder and baker Xavier Lee set up shop after leaving his auditing career at a Big 4 accounting firm for a patisserie course at Le Cordon Bleu Australia. The rest, as they say, is history. Apart from the signature vanilla rum canelé, expect unique flavours like the Baileys Rocher and Taro. The home baker is currently operating a pop-up at Orchard Central’s Baker X till 3 April. 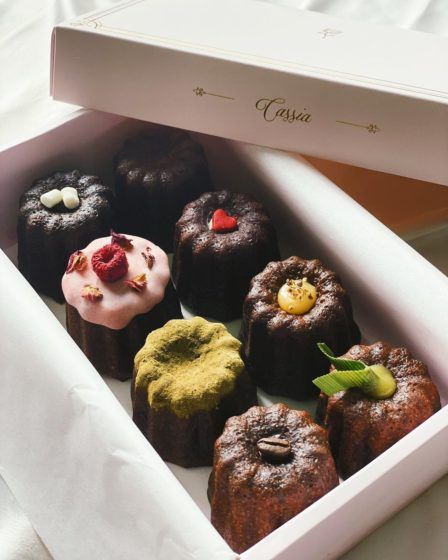 Other homebakers that’ve transitioned from an office job is Cheryll Cassia Walla. Formerly a YouTube analyst, the Singapore-born Indonesian now sells her mouthwatering bakes at her home bakery, Cassia Canelés. While you can always grab a box of mini canelés or original canelés, we suggest picking up her other more unique flavours. The box of Korean Edition Canelés, for instance, comes with flavours like peach makgeolli, honey citron tea, injeolmi and green grape soju, while the Japanese Edition Box offers variations such as hojicha, matcha, and black sesame. 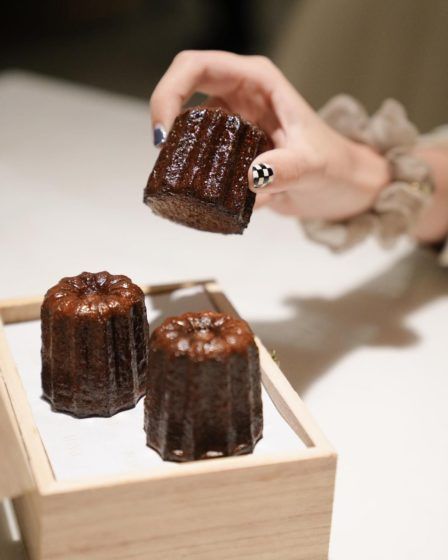 The canelés at Path Restaurant will first visually impress you with its size. The sizeable number then intrigues with its smell — instead of rum, it’s laced with Jiang Xiao Bai baijiu, which elevates the traditional French dessert with a distinct and lasting fragrance. Tear open the deeply caramelised crust to reveal a spongey, custardy centre. The dishes at Path restaurant are equally impressive, so be sure to visit for a hearty meal before finishing off with the canelés.

P.S. Chef Marvas Ng personally has a couple (sometimes more) canelés for “taste testing” daily, which is just code name for the mildly concerning addiction he has for these sweet treats. 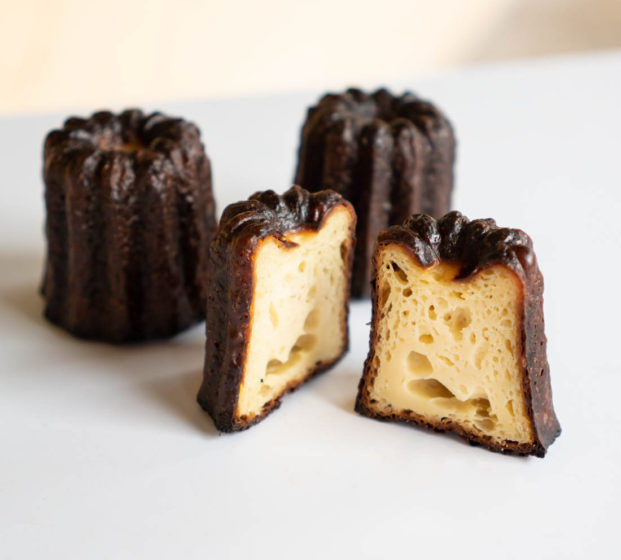 Patisserie G may be popular for their cakes, but they also have canelés on the menu that’ll sort your cravings out in a jiffy. The pieces here come crafted with a thick, dark, caramelised crust that encases a soft, rum and vanilla-flavoured custard centre. The canelés are baked fresh daily, so be sure to order them one day in advance by 12pm. There is a minimum order of six pieces per order. 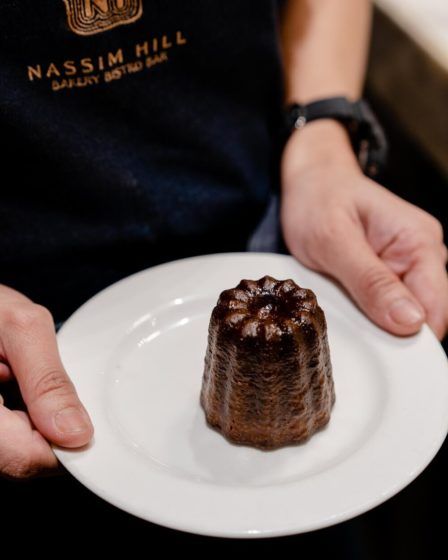 The rum-laced canelés are what we live for, but for those who aren’t in favour of alcohol, don’t fret. Nassim Hill Bakery Bistro Bar has a version of the dessert that’s free from the booze — making it friendly for kids as well.

Address
56 Tanglin Road, #01-03, Singapore 247964
Website
Website here
Order here
Dining Desserts french pastries home bakers Canelé
Jocelyn Tan
Senior Writer
Jocelyn Tan is a travel and design writer who's probably indulging in serial killer podcasts or reading one too many books on East Asian history. When she actually gets to travel, you can find her attempting to stuff her entire wardrobe into her luggage. Yes, she's a chronic over-packer.
Travel Design
Sign up for our newsletters to have the latest stories delivered straight to your inbox every week.