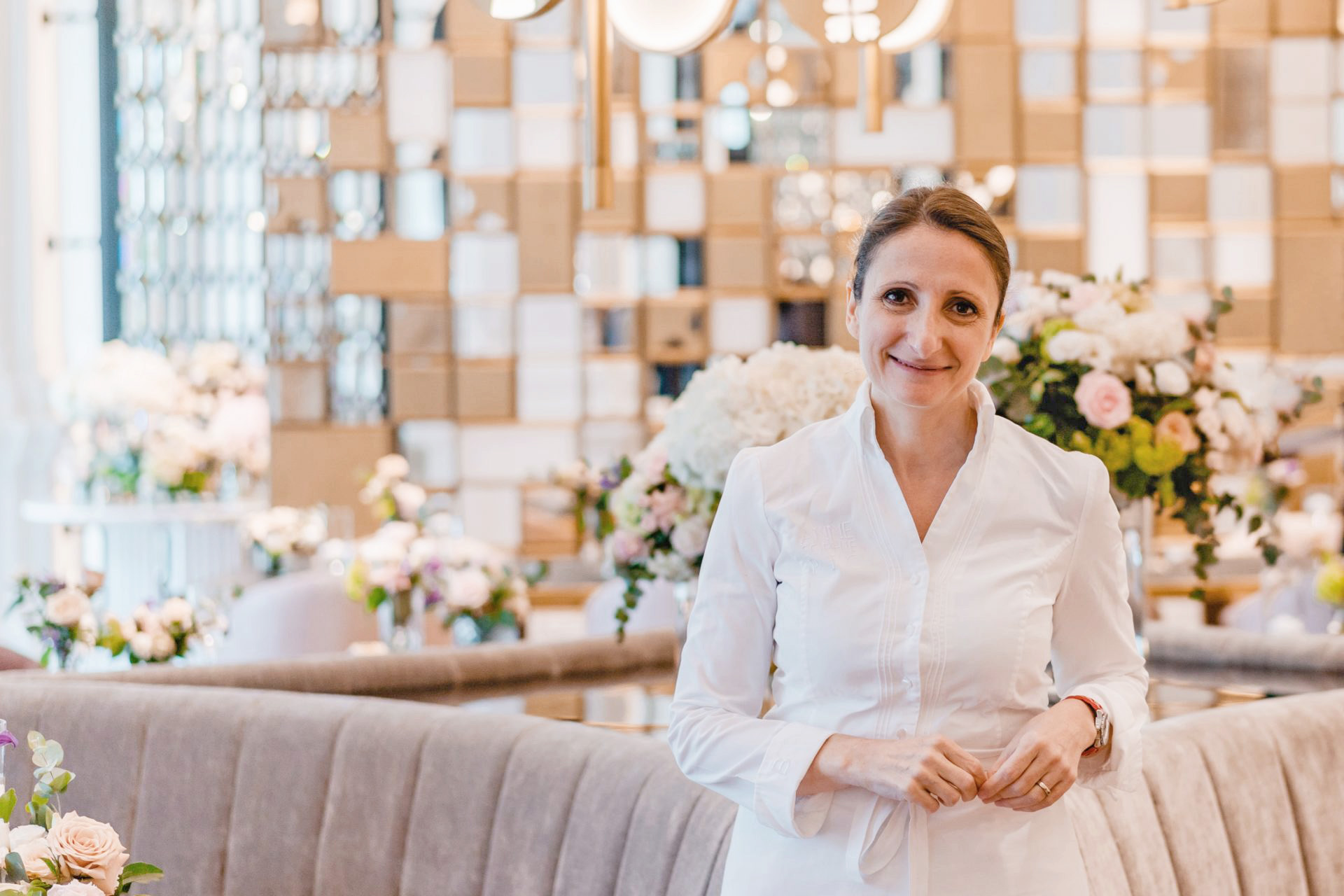 Raffles Hotel Singapore is still a month or two away from officially opening its doors after an extensive restoration and renovation project. In the meantime, we’ve scored a first look at La Dame de Pic, one of the few celebrity restaurants at the luxury property.

The restaurant’s opening marks renowned French chef Anne-Sophie Pic’s debut in Asia. The fine-dining establishment is still in the midst of some touch-ups and going through a finalisation of its menus. It is due to open to the public on 5th July.

La Dame de Pic Singapore is the third of its name. There are two others in Paris and London, but what’s unique about this Asian outpost is Pic’s more ‘feminine approach’ to interiors and cuisine.

Pic, who is the World’s Best Female Chef of 2011, goes for a colour palette of pastel pinks, soft greys and touches of plum, further accented by brass fixtures and dining tables. Spades are stamped all around the space, on hanging chandeliers and as lamp fixtures — a playful nod on a pun of the chef’s surname.

When it comes to cuisine, Pic’s interpretation of French fine dining is one that’s driven by considerable use of floral essences. There are always edible flowers delicately planted around the plate for garnish and to lend an elegant fragrance to her light-handed approach to the cuisine.

The soft-spoken chef is also insistent in opening up to local ingredients and inspirations in her dishes. Kuih Rose, or Chinese beehive cookies, serve as canapes, dotted with mushroom puree and edible flowers. Her signature berlingot pasta comes with a locally-inspired consomme made of chou cao (herb of grace) and green zebra tomatoes. In an ostensibly French dessert of strawberries atop a slender sliver of sable, there’s mousse of andaliman peppers (shown on the menu as Batak berries) lending a whisper of citrus and spice.

In the meantime, we take a few moments with her to talk about femininity and diversity in an increasingly global dining landscape.

Food & Drink
Mirazur tops the World’s 50 Best Restaurants list in 2019
The word ‘femininity’ comes up a lot in your new restaurant. What does ‘femininity’ mean for you, and how does this come through in your cuisine?

‘Femininity’ comes from my personality, it translates into my food through my attentiveness to emotion. From there, I create balanced flavours, freshness, light dishes for diners. ‘Femininity’ is something global, you can call anything feminine. But for me, it’s about being elegant as you can see here at La Dame de Pic. I’m always trying to find that balance of elegance in our dishes. It gives consistency to the cuisine.

One way I try to translate this is with flowers in my dishes too. It’s about adding them together, to appreciate and reveal different flavours instead of hiding anything. Say for my amuse bouche of peas. It’s just a small dish. I used geranium and coriander for me to add that local twist in French cuisine. But it also adds a deeper flavour, complexity in the dish.

There are many French restaurants around the world. Few, such as yours, are considered great. What’s the key to standing out amongst such intense competition?

I think it is to be aware of faults and weaknesses, to rely on intuition. In my own experience, I’ve noticed many trends in the dining scene. My intuition tells me to not follow or get stuck to these trends, but to continue doing my work and follow my way of doing things. I have the same way of cooking, but it improves because I use better ingredients and change a few techniques. It’s the same in terms of combining flavours too. I don’t work with the same flavours I used five years ago. Each year, I include new things and change ingredients and textures.

It’s also about being aware of where we are living: not to be too French and narrow-minded. It is very important to be open-minded. When you wake up, you realise there are many beautiful things to discover everywhere we work or travel to.

In my early days, I thought that when I got older I would have fewer ideas and become less creative. On the contrary, because I get more mature and I know what ways not to take. I’m more conscientious of the time we are living in. We don’t eat the same way now than 10 years ago. If you want to do the same thing, you’d fail in the long run.

In today’s dining scene, diversity is essential. How has French cuisine come to embrace diversity across borders?

What I like here in Singapore is diversity, just like London. The country’s so rich in culture. So, if you’ve only exposed yourself to one culture, I imagine you won’t be able to express yourself further and you won’t improve. So I’m very fond of this diversity. I believe in the transmission of cultures between people. Each time I work with new ingredients, I try to understand not only about how it was cultivated but also about the culture and history surrounding it. If I had stayed in my home at Valence, I wouldn’t have improved or evolved.

But this mindset has been developing for a long time as well. When I was a 21-year-old student, I had the great sense to stay one year abroad, spending 4-5 months in Asia and later in the States. There was no Skype, no iPhone, nothing to distract me. So it made me integrate into these various cultures and environments fully. Still, we have our own roots, and we should respect that. I’m very French with my values for instance. But I see it as a way to influence people as other cultures have done for me.

The world has opened up so much more to other cuisines. How does French cuisine, so often seen as the king of cuisines, stay relevant in this global dining landscape?

I don’t believe anymore in the superiority of cuisines. There are beautiful cuisines all over the world. I believe more of referencing French cuisine as an inspiration for a lot of people. People all over the world come to France to understand how the brigade or the kitchen hierarchy works. French cuisine, as a result, has gained a lot of respect in that process. The diversity of French cuisine, as is Asian cuisine, is of course something to look out for. You can get something simple to something much more complex.

Raffles Hotel Singapore La Dame de Pic Anne-Sophie Pic
Jasmine Tay
Senior Writer
Jasmine Tay is the dining, culture and jewellery writer. She makes fine silver jewellery and causes mini-explosions in the kitchen when she can't afford fancy dinners. Sometimes she tells people what she thinks about art, and binges on the music of Danzig when they don’t agree.
Dining Culture Jewellery