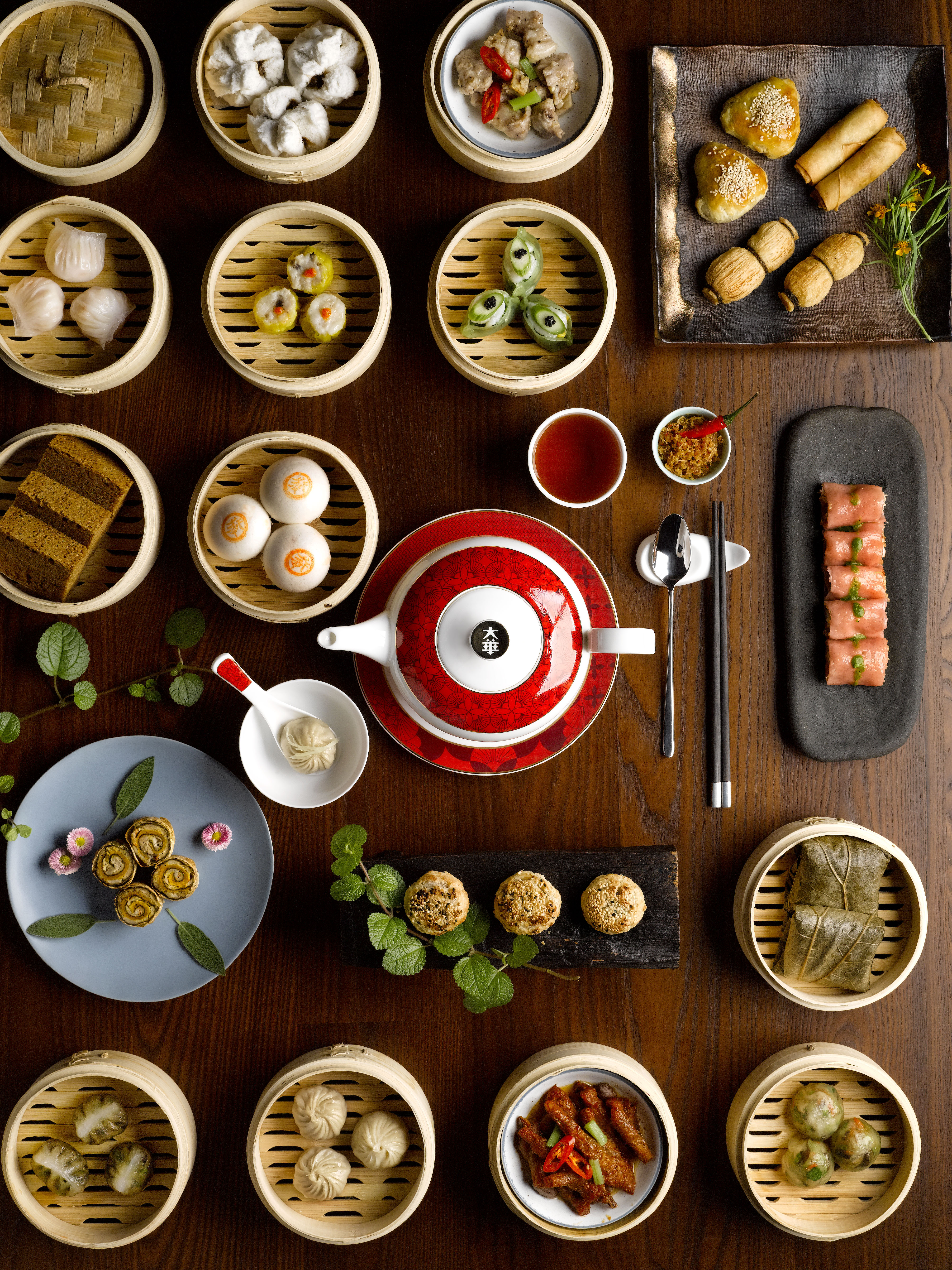 When the 11-year-old New Majestic Hotel shut its doors for the last time on 1 June 2017, it also signalled the end of an era for Majestic Restaurant, a Chinese eatery located on its premises.

First launched in January 2006, the latter had opened ahead of the hotel, which only started welcoming guests from May onwards. The restaurant served contemporary Cantonese fare in a cosy space decked out in green and white hues, and was known for its innovative signature dishes such as wasabi prawn and stewed lobster noodles.

After a six-month hiatus, Majestic Restaurant is back with a sleek new space at the swanky Marina One mixed-use development, and armed with a refreshed repertoire of Cantonese cuisine.

Its new home is a pavilion outfitted with floor-to-ceiling glass walls, and surrounded by lush greenery and swooping metal beams. Inside, calming earth tones are accented with pops of red and turquoise. Specially commisioned tableware decorated with crimson floral motifs also inject vibrancy into the space.

Some items from the restaurant’s original venue have been retained, though, such as its signboard, and paintings by Chinese artist Li Jin. And of course, it continues to be helmed by its chef-owner Yong Bing Ngen, who also operates Jing at One Fullerton and Majestic Bay Seafood Restaurant at Gardens by the Bay.

The menu has undergone a facelift too. While crowd-pleasers like its Boston lobster noodles remain available, Majestic Restaurant has introduced a range of exciting new creations, as well as expanded its dim sum menu.

Must-try dim sum dishes include organic brown rice rolls filled with prawns and topped with a sauce of pu er tea, peanuts and vegetables (S$6.80 each), as well as crunchy radish rolls that break apart to reveal a moreish stuffing of chicken and button mushrooms engulfed in gooey mozzarella cheese and sprinkled with curry powder (S$4.80 for two).

No visit to a Cantonese restaurant is ever complete without ordering double-boiled soup, so we tried its old cucumber soup, a clear and comforting broth that came presented inside a whole cucumber (S$18). Prawns and scallops were added into the soup, which made it even more delicious.

Another winner was the Lobster Soup Dumpling (S$9.80), comprising a fat dumpling sitting in a rich, sweet lobster broth. The dumpling was an indulgent treat with its generous filling of lobster claw meat, bamboo fungus and scallops, and left us craving for more. It’s one of the new additions to Majestic Restaurant’s à la carte menu.

The star of our meal was undoubtedly the Peking duck, which was served with scallions, cucumber and pancakes (S$88 for whole, S$48 for half). The duck, which the restaurant sources from Silver Hill Farm in Ireland, was roasted to perfection and its skin was delightfully crispy. Its meat, which we enjoyed as a separate dish, also impressed as it was succulent and not at all gamey.

What makes Majestic Restaurant’s interpretation of this dish particularly noteworthy, is its use of rose pancakes in place of the usual thin, crepe-like wraps. These lovely pink pancakes are coloured with rose powder and created to be slightly thicker and spongier than the usual. Who knew Peking duck could come dressed in millennial pink and look so Instagram-worthy?

Also worth trying is the French Corn-Fed chicken (S$28), which is stuffed with a medley of herbs and spices such as salt, bay leaves and ginger, before being smoked overnight, and finally presented in a glass dome containing hickory smoke. The result is soft, tender meat covered in addictively salty, crispy skin and imbued with smokey undertones.

For dessert, we wasted no time in wolfing down the restaurant’s crispy durian (S$10), a large fritter packed with sweet and creamy durian flesh, and drizzled with sticky maple syrup.

Majestic Restaurant officially opens on 26 January, but operations are already very much in full swing — during our visit, it was bustling with activity. Its posh new space at Marina One is completely different from its old, quaint home at the defunct New Majestic Hotel, and in a good way. It’s elegant and beautiful, and makes an ideal venue for anything from business lunches to family gatherings (two private rooms are available). We hear that reservations for the eve of Chinese New Year are filling up fast, so book early if you’re planning to hold your reunion dinner there.

And here’s another thing that sets this classy eatery apart from its counterparts: Instead of the usual Chinese instrumental music, expect to hear uptempo electronica tunes from the Magic Deep series of albums, curated by French DJs Claude Challe and Jean-Marc Challe. Dance music and dim sum? We’re sold.