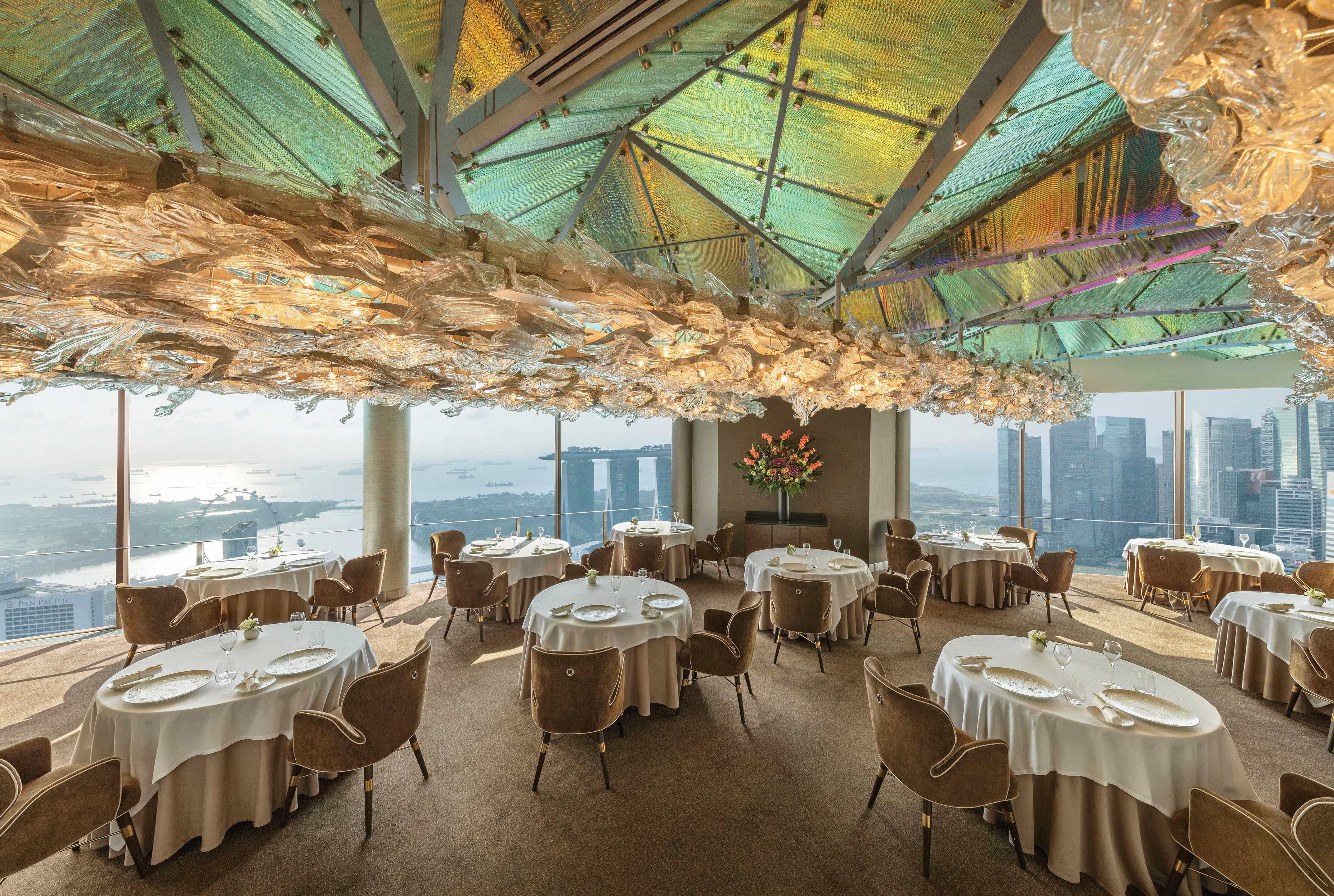 Review: Jaan grows into its British roots comfortably and beautifully

It’s been a year since Kirk Westaway took a huge gamble with the one-Michelin-starred restaurant, Jaan. Taking it from French cuisine to modern European cuisine that it was known for, Jaan is now a proud British-forward restaurant reflective of Westaway’s heritage.

That gamble has certainly paid off. With his ‘Reinventing British’ cuisine, Westaway has managed to retain and pull up Jaan’s standing on this year’s Asia’s 50 Best Restaurants list.

It seems only right to revisit how this cuisine has evolved and developed thus far. We get the usual spiel: that this menu — now in its spring edition — is not about ‘fish and chips’. Yet, one can help but wonder how to truly define British cuisine beyond beer battered seafood and pea soup.

Restaurants in Singapore are slowly catching on to giving representation to this cuisine, which hasn’t had as much time in the gastronomic scene as other European cuisines like French, Italian and Spanish.

The answer lies in proudly British ingredients. Westaway looks to his childhood, spent around Devon farms, and elsewhere in the United Kingdom for his ingredients. Elsewhere in the menu, Westaway brings in a ‘British approach’ – a more sophisticated approach to British snacks and sweets.

Menus start off with a hands-on affair with a quartet of snacks. There are the usual star highlights, like the buckwheat pancake stuffed with cheddar cheese from Devon and the delicate gem of sweet beetroot meringue, topped with smoked eel cream and horseradish. What’s new is the duck sausage roll, a beautiful construction made of a pretzel ‘spiral’ housing a thin cake of pancetta and duck. The moreish bite is followed by another new interpretation of ‘fish and chips’, another pretty thing of cod poached in milk in a potato tartlet.

Butter gets an honorary welcome to the dining table

Then, there’s Jaan’s rye sourdough warmed up in a nest of hay and hot stones. It’s a loaf of lovely bread with a tinge of musk and a crust that shatters in bits all over the white tablecloth. The highlight here, however, is the butter. We’re not sure if Westaway’s duo of flavoured butter will ever make their way back to the dining table, but we like the ‘plain’ one from Devon. It’s a little theatrical bit by the tableside. The waiter pulls up a trolley, unveils a rich yellow block, carves up a generous cube of it and presents the butter on a smaller dish crowned with sage and a sprinkle of Cornish sea salt.  It’s rich, creamy and salty in good measures, as good butter should be.

The highlight of Jaan’s new spring menu is a mesmerising mosaic of white asparagus slices, presented on a clear glass plate. This albino strain of asparagus, the result of it growing underground away from sunlight, is simply blanched in milk and left with its pure, nutty flavours. It’s interspersed with bright gold pike caviar and sunny orange trout caviar for a touch of brine for each bite. Little dollops of cream cheese and creme fraiche carry the subtle sweetness of the spring vegetable.

Here, the traditional pea soup is given a sophisticated spin. It centres around a disc of halibut, simpled seasoned with salt and cooked over a water bath. The firm fish comes along with a bouquet of spring ingredients — sweet spring peas, beans, sugar snaps and flowers — and bits of rare, Obsiblue prawns in between to lend a necessary bit of creamy sweetness. It all comes together with a deep green puree of peas, dashi and mussel broth.

While the rest of the menu so far has been gentle on the palate, the last main of Iberico pork is a flavour bomb. A tender eye of pork loin is rolled around a bed of crispy shallots and deep-fried pork crackling, topped with a mushroom mix spiced with ginger and mustard seeds. But, the star on the plate is the unassuming onion kernel by the side, stuffed with an intense mix of roasted aubergine, sauteed onion and barbecued pork belly.

The menu comes full circle with ‘sweet treats’, Westaway’s take on canapes with a cluster of classic treats. For spring, Westaway introduces a lemon meringue tart with hints of acidic sweetness. Mini tiles of marzipan-wrapped Battenberg cake, sporting alternating blocks of dense rose and almond sponge, serve as little comforting hugs at the end of the meal.

JAAN Kirk Westaway reinventing british
Jasmine Tay
Senior Writer
Jasmine Tay is the dining, culture and jewellery writer. She makes fine silver jewellery and causes mini-explosions in the kitchen when she can't afford fancy dinners. Sometimes she tells people what she thinks about art, and binges on the music of Danzig when they don’t agree.
Dining Culture Jewellery