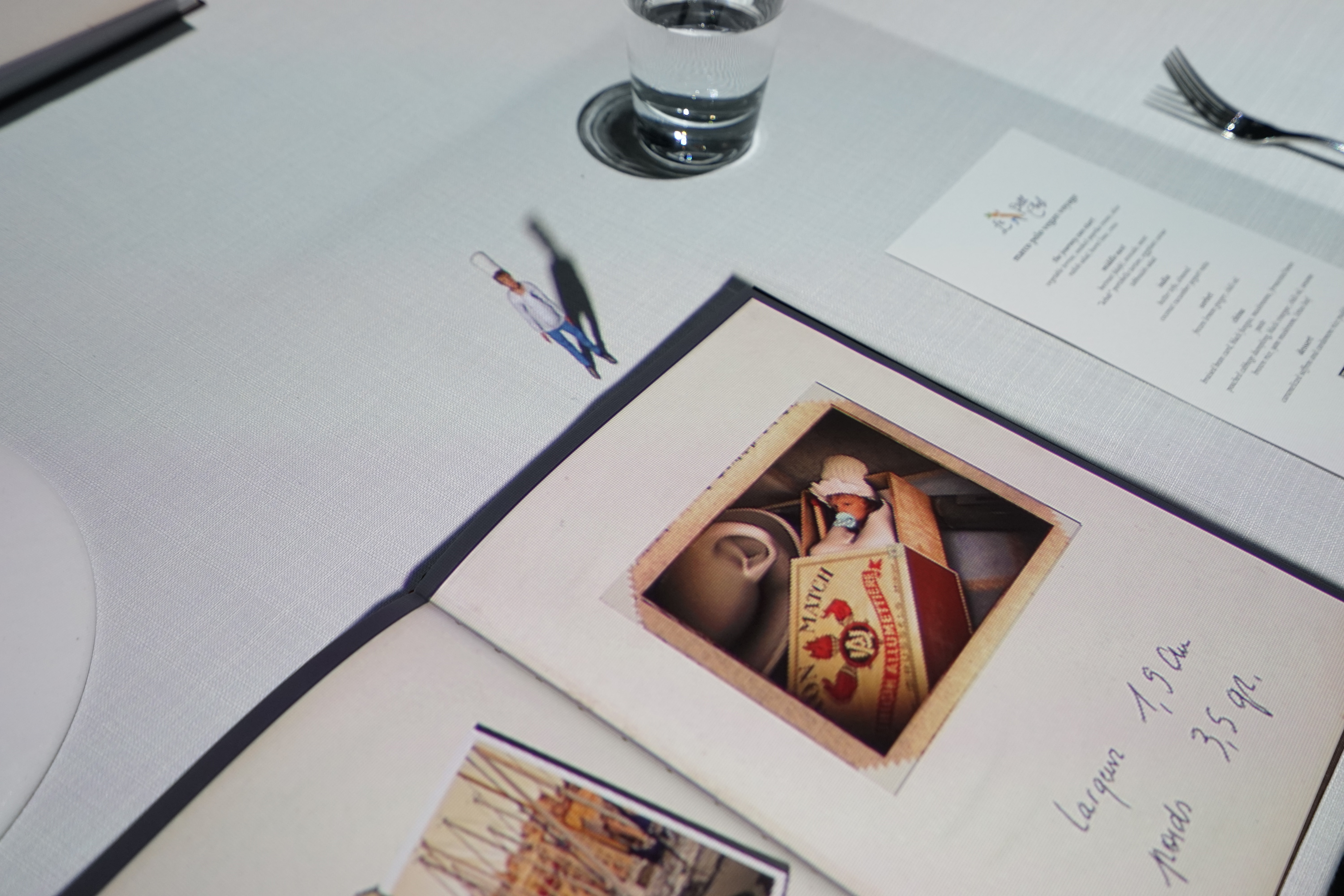 After making a brief pop-up at La Brasserie, the world’s smallest chef is now back for a longer stay in Singapore. Le Petit Chef, as he is known, is a Thumbelina-meets-Bourdain character who travels around the world for culinary inspiration. Now, he is stationed at Grand Hyatt Singapore to showcase his latest dishes from 5 September to 30 December 2019.
He isn’t real of course. The pot-bellied Frenchman is a 3D projection created by Belgian-based company Skullmapping. With the help of overhead projectors, the dining table transforms into an immersive theatre where the chef comes to life.

Food & Drink
Plant-based chicken arrives in Singapore, and you can try it at the Grand Hyatt

That’s what diners will expect at Mezza9’s wine cellar La Cave, where these cinematic sessions will be hosted at. At an exclusive media preview, Lifestyle Asia had a first look at what’s cooking.

This time, Le Petit Chef is dealing with a lacklustre restaurant and bored customers. He packs up his bags and goes on a voyage, following the footsteps of legendary explorer Marco Polo.

While Le Petit Chef (with the assistance of a host) gets to the story-telling bit, the real chefs at the back are the ones who have created the menu and are now busying about getting six courses out to the dining room. In a two-hour seating, diners get a taste of dishes from France, the Middle East, India and later in China: also a convenient reflection of Mezza9’s international buffet offerings.

A story to tell

Instead of the usual plate and cutlery set-up, the table is set with hardcover books and wine glasses. Each accessory on the table is aligned specifically to overhead projectors, and you’ll find waiters constantly fussing over them. The night’s host signals diners to flip the books open, and there on blank pages is Le Petit Chef ‘crawling’ out, flipping pages and ready to tell his story.

He takes a paper boat ride out and battles it out with raging waves and ocean life. Triumphant music fills the room and the entire dining table is awashed with waves. It’s reminiscent of a Universal Studios ride sans the nausea and plastic seats.

It makes for a comfortable and immersive experience for the first course, featuring fresh pickings from the sea. A classic bouillabaisse is reduced to a one-bite jellied terrine, and then there’s a disc of sweet crab meat with a mound of caviar: a nod to the character’s French origins.

Exploring the Middle East
The great thing (and grating for restless diners) of Le Petit Chef’s dining experience is that everyone at the table starts a course at the same time. The story continues once all diners are done. Perhaps, in a strategic move, bite-sized morsels help to get things moving.

The second course sees the Chef stranded on a desert, just minutes away from a bustling souk. He dines on figs and chillies, gets kicked out of the market but has time to gather some inspiration for the next course. Intricate enamelled dishes, in theme with the Arabesque theme, arrives to the table each filled with small bites: beetroot falafel perfumed with fresh mint, a moreish beef tartare ‘kebab’ topped with eggplant ‘caviar,’ a salad of tiger prawn that’s more tart than spicy and a bowl of tabbouleh to cool tongues off a bit.

By now, the Chef has found in a sparrow both benefactor and friend in his so-far unlucky journey to the East. His feathered pal recommends heading to India for some of the world’s most flavourful dishes. But they get distracted in the local spice market with trays of coloured sand. In the wake of their playful moment, the dining table is left in a colourful mess and wafts of spices fill the room. India’s most popular curry, the humble butter chicken, is served without much-needed fanfare. The dish is served with traditional accompaniments with fresh-out-the-tandoor naan and raita on the side.

The Himalayas and onward to China

On his way to the Himalayas, the Chef makes a quick stop on a mountain and admires the view. Diners are treated to a short break with a palate cleanser, a sorbet of lemon and ginger spiked with chilli oil. The experience goes beyond the dish as well. Billows of dry ice presented with the dish floods over the table which is now a thick bed of ‘snow.’

It also sets an exciting pathway to the next destination: China. The duo ends up in a temple nearby, unknowingly feasting on offerings and getting their just desserts promptly. The heroes make a dazzling escape out of there, to safety and another course. This time, mains see a sampler of Cantonese delights: steamed lobster dressed over with ginseng and soy sauce, a plump dumpling with a whole abalone, and lastly lotus leaf-wrapped brown rice with slivers of truffle for oomph.

Proof is in the pudding

All things come full circle in the finale of this journey around the world. Le Petit Chef settles back down in France, revitalised with ideas for a slew of wondrous dishes. But he considers one item his signature: a pudding which is a sweet culmination of influences from all the various places he had travelled. The chef insists on preparing this personally and diners are in for a real treat.

Of all the dishes in their experience, only dessert sees the Frenchman ‘working his chops’. He pulls up all the spices and ingredients he’s gathered everywhere to whip up one final sweet treat. He does expense all effort, tripping over spoons and grinding cardamom under his heels.

The real deal, a caramelised saffron and cardamom creme brûlée, is a luscious custard both fragrant and sweet. It’s a simple pudding, but also a meaningful one that weaves in all the best spices and ingredients of the regions: almost a symbolic gesture at the beautiful connections around the world.

Our snobbish selves will tell us that we really need no gimmicks to tell us how cuisines around the world come together. We have the Internet and masses of restaurants popping each day to tell us that. The lighthearted expedition of one cartoon character comically trudging through the steps of Marco Polo however has infused into a meal a rousing message on just how small the world has become. Far from pedantic, Le Petit Chef really is just great fun.

Le Petit Chef will be running his dinner stories from 5 September till 30 December at the Grand Hyatt Singapore. The six-course menu starts at $188++ with option for a vegan menu or a kid-friendly menu.

Grand Hyatt LE Petit Chef
Jasmine Tay
Senior Writer
Jasmine Tay is the dining, culture and jewellery writer. She makes fine silver jewellery and causes mini-explosions in the kitchen when she can't afford fancy dinners. Sometimes she tells people what she thinks about art, and binges on the music of Danzig when they don’t agree.
Dining Culture Jewellery