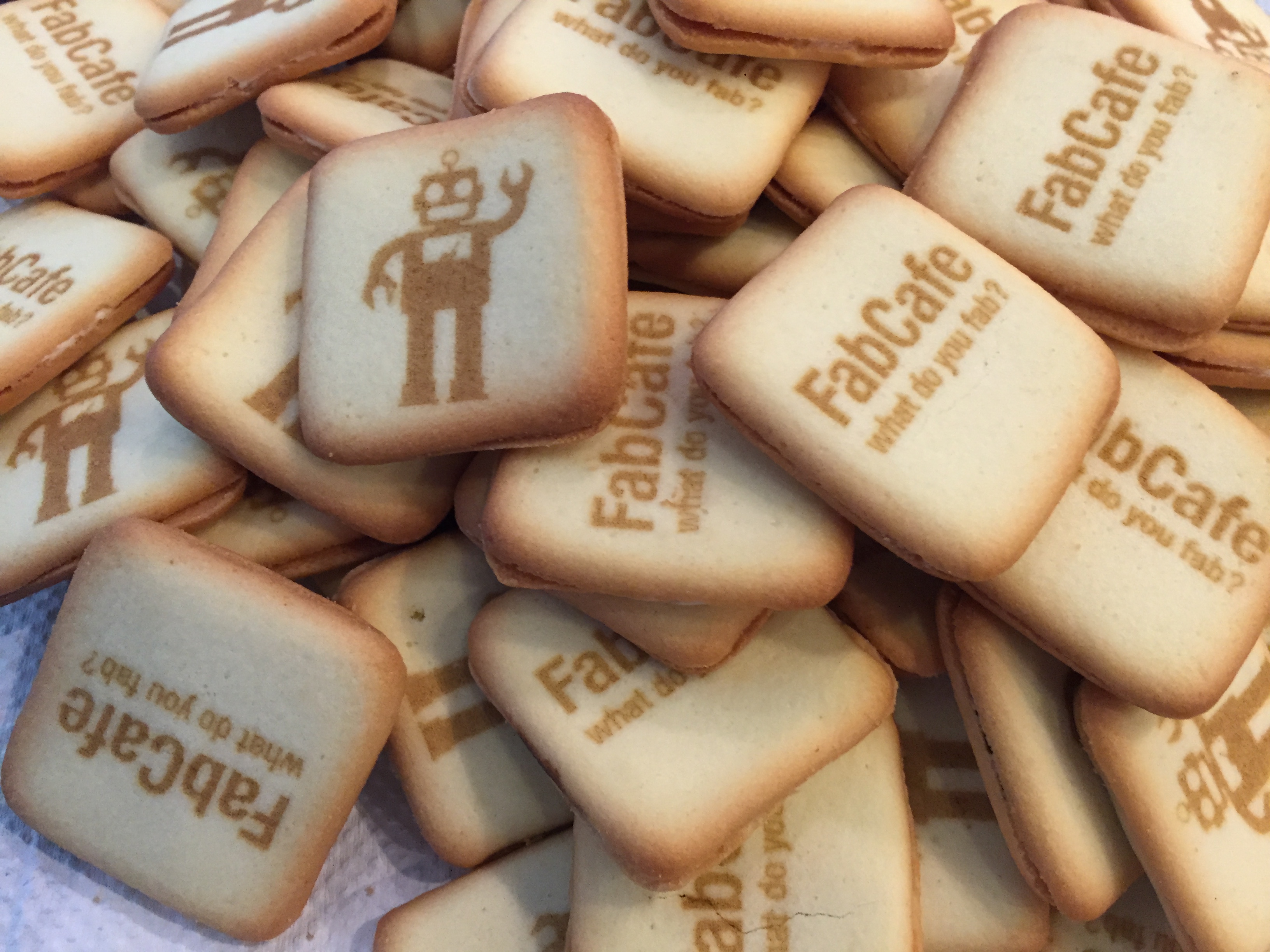 Rise of the machines: How technology is shaking up the dining world

Food & Drink
Rise of the machines: How technology is shaking up the dining world
Share this article
Next article

Pizzas from a printer. Robots that deliver your meals. Restaurants that fool you into imagining you’re dining in a lush forest, desert or any setting of your choice — thanks to some high-tech simulation effects.

It sounds like something right out of a science-fiction movie, but this Jetsonian utopia isn’t too far-fetched. Recent years have seen the proliferation of technology extending beyond smartphones and watches, and making inroads into the kitchens of restaurants. Think artificial intelligence, virtual reality, multi-sensory experiences and 3D printing.

The latter has surged in popularity worldwide, with savvy users rolling out a whole host of items ranging from makeup to jewellery and figurines. Its premise is surprisingly simple: One simply designs the desired product on a computer, hooks it up to a 3D printer and hits the “print” button. The 3D printer churns out the object layer by layer, from its bottom upward. As more layers are added, the item becomes three-dimensional.

Using such technology for food is slightly more complicated, as the ingredients — which range from hummus to pasta and chocolate mousse — have to be puréed. There are also limitations to which aspects of the dish can be easily printed. For instance, a printer can be used to produce a uniformly shaped pizza base, but its toppings still need to be added by a human chef.

Despite such limitations, a few establishments worldwide have introduced 3D printers in their kitchens. One example is Food Ink, which is one of the world’s first 3D-printing restaurants. The London-based concept is a pop-up dinner series where everything, from the food to the utensils and furniture, is crafted with a 3D printer. At its July world premiere in London, Food Ink served up an 11-course Mediterranean fine dining menu complete with a chocolate dessert.

“The goal of Food Ink is to use the universal language of food as a fun and accessible way to promote awareness about the amazing possibilities of 3D printing and other promising new technologies,” said a company spokesman to UK newspaper The Mirror in July. According to 3D printing news website 3ders, Food Ink is slated to stop by Singapore as part of its world tour. Details on its launch here are scant, but one can only imagine that it’ll draw throngs of curious foodies.

Another tech-forward enterprise is the newly opened FabCafe Singapore at the ArtScience Museum, where patrons can savour coffee and laser-cut macarons, while trying their hand at 3D printing and laser engraving. Its owners are currently in talks with a few partners about using 3D food printers in the café, and are even considering building their own.

“What we’re interested in, isn’t so much the technology itself, but how it helps to enhance and transform how we experience food — the processes of how it’s being produced before it reaches the table, and how it will change our cultural and social understanding of food,” says Chris Drury, one of FabCafe’s four founders. The establishment first launched in Tokyo in 2012 and has outlets in Barcelona, Taipei and Toulouse.

Local chefs are enthusiastic about 3D printing, believing that it can make food preparation processes more efficient. “3D printing is very progressive, and it can be useful for routine, time-consuming tasks. This can help reduce manpower,” says pastry chef Janice Wong of Janice Wong Singapore.

Wong has never tried using a 3D printer to whip up dishes from scratch, but has a special printer in her kitchen for engraving patterns on food surfaces such as cocoa butter. These have been incorporated into her food. One example is her signature Crispy Charcoal Nest noodles, which are served with a piece of flattened mushroom printed with a poem by American writer Henry David Thoreau.

It isn’t just 3D printing that’s making waves in the world of dining. Earlier this year, a group of Los Angeles-based scientists and artists rolled out Project Nourished, a concept that merges it with another intriguing form of technology: Virtual Reality (VR).

Diners chow down 3D-printed grub made of low-calorie ingredients such as algae and yeast, while donning Occulus Rift headsets that conjure up visually simulated food and settings. Aromatic diffusers are even brought in to produce the relevant scents — so you can “eat” your favourite lasagna or steak, without loading up on actual carbs and cholesterol.

Project Nourished is still in the works, but for those curious to try out its experience, its website retails a smartphone-enabled starter pack comprising a VR headset, scent disc and a downloadable 360-degree VR video. “What makes this so unique is that the experience merges physical and virtual environments into one, which means you can still chew, feel, smell and taste, but without taking in calories,” said founder Jinsoo An to The Telegraph in January.

Other similar concepts have sprouted up around the world. These include Sublimotion in Ibiza and Ultraviolet in Shanghai, both of which are multi-sensory dining experiences where guests sit down to a full dinner accompanied by lights, projections and sounds. Ultraviolet came in at 42nd place during this year’s World’s 50 Best Restaurants award ceremony.

Even celebrity chef Heston Blumenthal has jumped on the bandwagon and is currently working with London-based design studio Marshmallow Laser Feast on a mixed reality dining experience. According to Huffington Post UK, the event will “juxtapose food science, props, puppeteers and physical tracking technologies with sound design and performance”. Details for this are still under wraps.

VR has’t appeared in the Singapore food scene yet, but it’s already popping up in other sectors. Some interior design firms, for instance, offer it as a service to customers who want to see what their future home will look like. Even hospitality groups such as Shangri-La Hotels and Resorts have launched 360-degree videos so people can go on a simulated tour of their properties. So it only seems natural that the dining scene is next — and chefs here are excited.

“Give this a couple of years and a whole load of development, and the applications will be amazing. It always reminds me of the cartoon, Jetsons, or Back to the Future where you put in a mini dehydrated pizza in a microwave and, ‘Hey presto!’ — a giant perfectly baked pizza,” says Tim Ross-Watson, owner-chef of Modern European restaurant Pyxiemoss. He dabbled in both VR and 3D-printing technologies during his previous stint at food consultancy company Apple Pie Order.

Such technology has its drawbacks, though. For one, it’s bound to be more expensive than dining at a regular fine dining restaurant, because of all the equipment costs. A meal at Ultraviolet will set diners back by RMB 4,000 (SGD$817.92), while Sublimotion charges €1,500 (SGD$2285.37) a head. “For the average punter it’s just a bit too much. There will always be a market for new things and extreme dining experiences, but it’s not overly sustainable for every restaurant,” says Ross-Watson.

While it will take some time before 3D printing and VR are widely used in the F&B industry, some restaurants here are already riding the tech wave by incorporating sophisticated machines and artificial intelligence in their operations. In fact, at least two eateries here — Rong Heng Seafood in East Coast and Chilli Padi Nonya Café in Kent Ridge — have “hired” robots as waiters.

It sounds like the plot of a post-apocalyptic sci-fi flick, but rather than killer bots planning an uprising, these robots are servile ones programmed to deliver food and clear dirty dishes.

“It’s quite difficult to recruit manpower in Singapore, so these robots are a good replacement. And they won’t ever fall sick or need to take leave,” says Richard Zhang, owner of Rong Heng Seafood, which has five robots and 10 humans in its workforce. Three of the robots are tasked with sending food to tables, while two smaller ones entertain guests by dancing to tunes such as Gangnam Style. These robots are made in Japan and imported from China.

Zhang adds that another plus point of using robots is the costs he can save on manpower: Each robot costs $17,000, which is less than a human worker’s annual salary. He has already ordered four more, which are due to arrive by year end. The only drawback about these robots is that they can’t handle hot soup, in case they bump into customers.

Apart from artificial intelligence, there’s another form of technology that has been stealing the limelight as of late: Hot food vending machines. Already a ubiquitous sight in Japan — where you can get anything from beer to umbrellas and even fresh flowers with the tap of a button — these marvellous machines have been making their way into neighbourhood estates here.

The most recent entrant to the scene is VendCafé, a cafeteria equipped with vending machines that serve hot meals, snacks and drinks. Situated in Seng Kang, the establishment drew snaking queues when it first opened in August. Two of its machines offer a rotating roster of 30 hot dishes such as mutton rendang, curry chicken rice, chicken carbonara and salted egg yolk pasta. These are first prepared by chefs in a central kitchen before being packaged and sent to the machines.

“We’re thrilled to offer this new complete dining experience where technology and food work together to meet the demands of consumers’ urban lifestyles,” says Jocelyn Chng, CEO of JR Group, which operates VendCafé. “Because of the manpower crunch in Singapore, some establishments are unable to operate round-the-clock to cater to the needs of consumers. We believe that the VendCafé is in good stead to contribute positively to the local dining scene by offering the ultimate convenience of wholesome quality food, 24 hours a day.”

The café has proved to be a runaway hit, selling between 300 to 500 individual meals daily since its launch, and JR Group is now looking for potential partners to expand its concept into other estates. “We are glad that VendCafé has not only brought more convenience to the residents at Seng Kang, but it has also become an interesting dining destination for consumers from other parts of Singapore,” says Chng.

Technology’s role in dining is currently at a nascent stage, but judging from recent developments, it’s just a matter of time before it becomes more prominent in Singapore’s food scene. And perhaps, one day, we will get to “taste” culinary offerings from the likes of Heston Blumenthal without even leaving the country. Bonus points if there are robots to wait on us hand and foot.