How much do you know about the humble tonkatsu?

Tonkatsu was first served in Japan around the turn of the 20th century when Japanese restaurants started to introduce more western-style dishes, which was later on referred to as yoshoku. Similar to a German schnitzel, tonkatsu simply refers to a pork cutlet that has been coated in panko breadcrumbs then deep-fried.

Whichever you choose really depends on your preferences: Rosu-katsu comes with a layer of delicious fat, which makes the cutlet a lot juicier. Hire-katsu, on the other hand, tends to be lighter in taste, lower in calories, and is known to be the highest grade tonkatsu.

Yet, that’s not all you’re getting out of your meal when you have tonkatsu. The crispy golden slab is usually accompanied by a smear of spicy yellow mustard, a bowl of pearly white rice, a hearty mountain of thinly sliced cabbage, miso soup and some tonkatsu sauce on the side.

Authentic tonkatsu establishments also serve toasted sesame seeds that diners can grind with a mortar and pestle for a beautiful nutty aroma, which is then added into the sauce.

Ready to dig in?

You might also like…
Food & Drink
10 izakayas in Singapore that will transport you to Japan
Beauty & Grooming
Your complete guide to matcha, the ultimate Japanese superfood 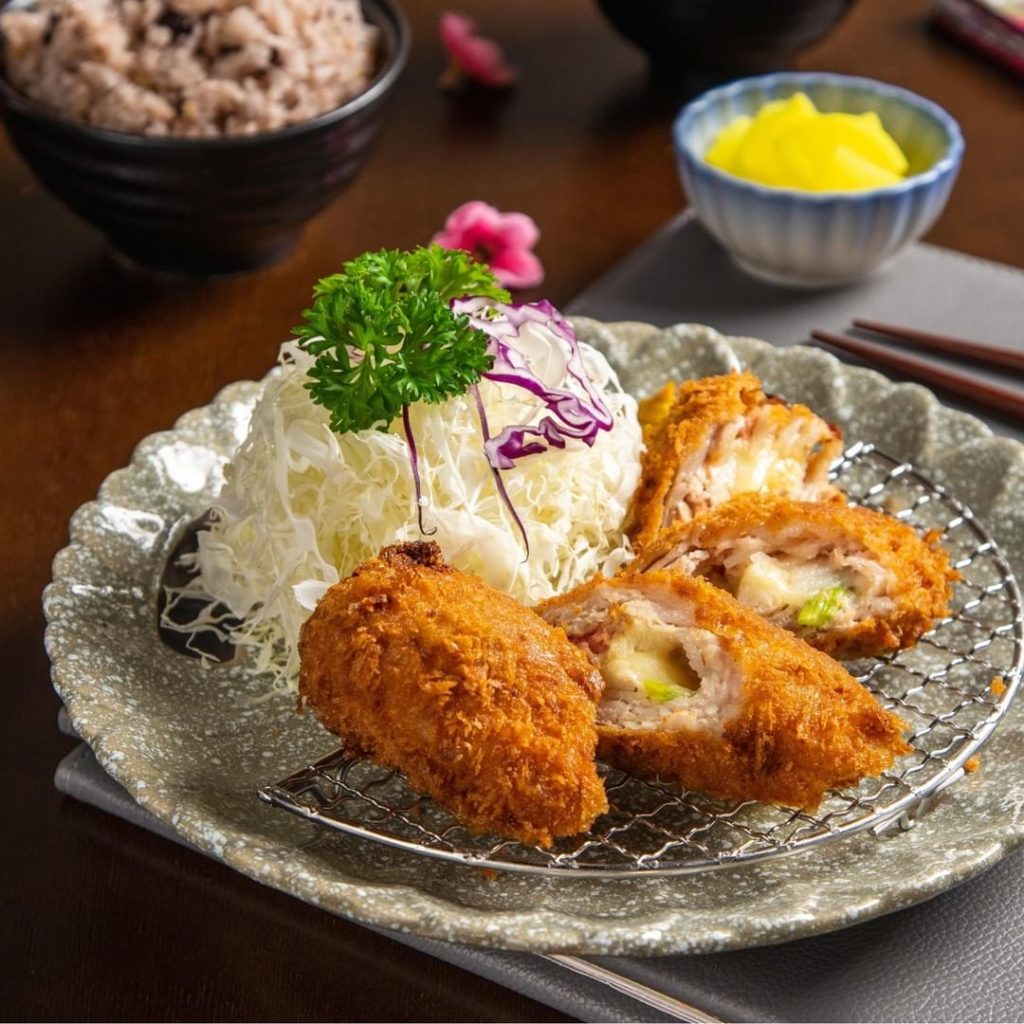 If you’re craving for thick, juicy cuts of tonkatsu while you’re shopping along Somerset, make sure to stop at Tonkatsu by Ma Maison. Here, we recommend the succulent Kurobuta Rosu Katsu, a two-centimetre thick cut that’s been aged for several days before deep-fried to crispy, golden perfection. If you’re not up for pork, the casual diner also serves a mean Chicken Cheese Roll Katsu Set, complete with katsu-style chicken rolled with cheese and vegetables. Hungry guests don’t have to fret — the rice, cabbage and miso soup sides are refillable with every order. 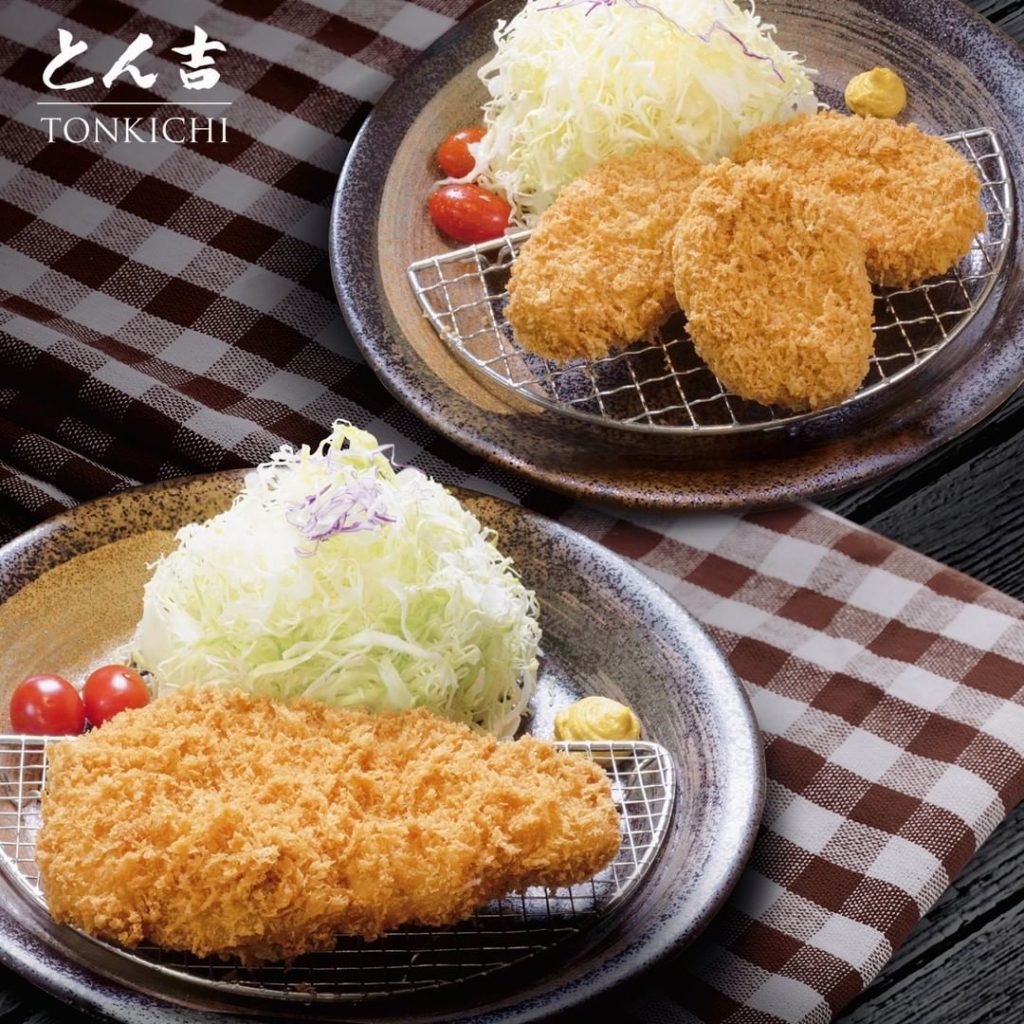 Tonkichi first opened its doors to Singaporean diners in 1992, making it one of the undisputed pioneers of tonkatsu speciality joints on our shores. Besides favourites like the Kurobuta Kata Rosu Set and the Hire Katsu Set, they’ve also introduced seafood into the mix: think prawn, oysters, and crab croquettes for a neat selection that’s sure to satisfy everyone at the table. 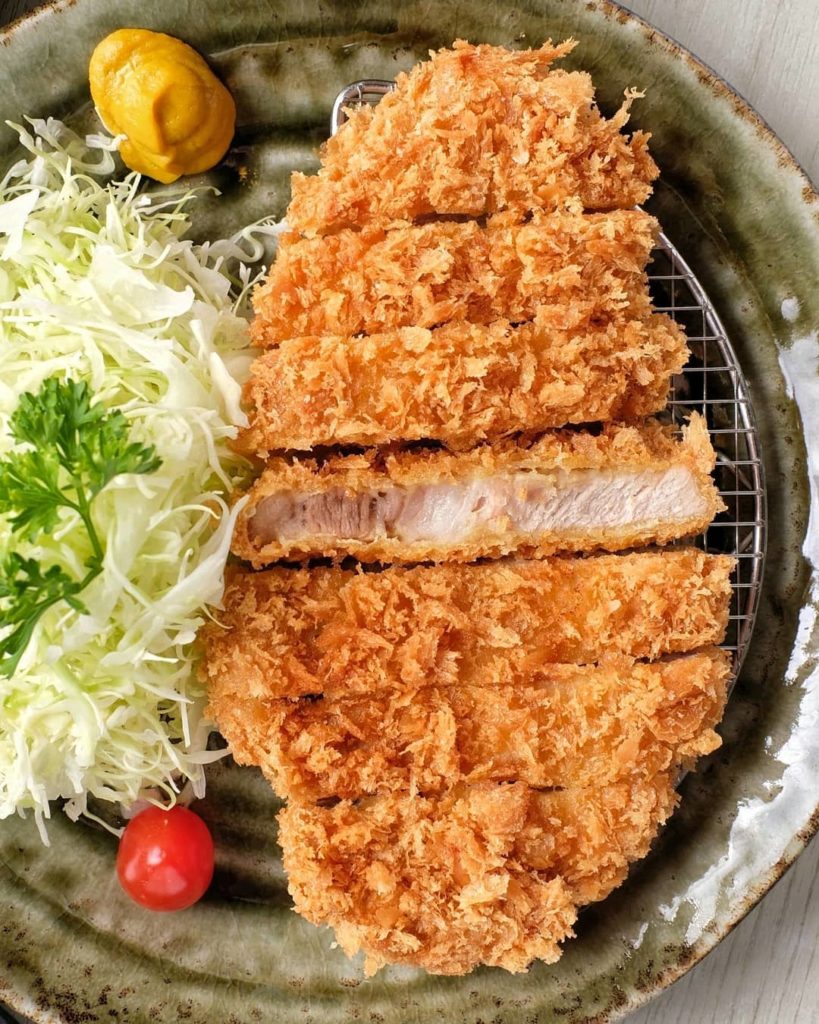 Hajime Tonkatsu & Ramen is helmed by Chef Tan-San, who brings with him a wealth of over twenty years of experience in the art of tonkatsu. Here, they specialise in the Nagoya-style tonkatsu, which sees a beautiful black miso sauce drizzle on side of the crispy cutlet. Besides their mains, sides like the juicy pan-fried Gyoza are popular too. Imakatsu is most known for three things in particular: its special double-frying method, original sauces and careful selection of ingredients. The Star Vista outlet, which opened in 2014, is Imakatsu’s first overseas outpost and the only tonkatsu store in the Buona Vista area. Crowd favourites include the Premium Pork Loin Cutlet Zen, the Mentaiko Loin Cutlet Zen and the Pork Loin Cutlet Curry. 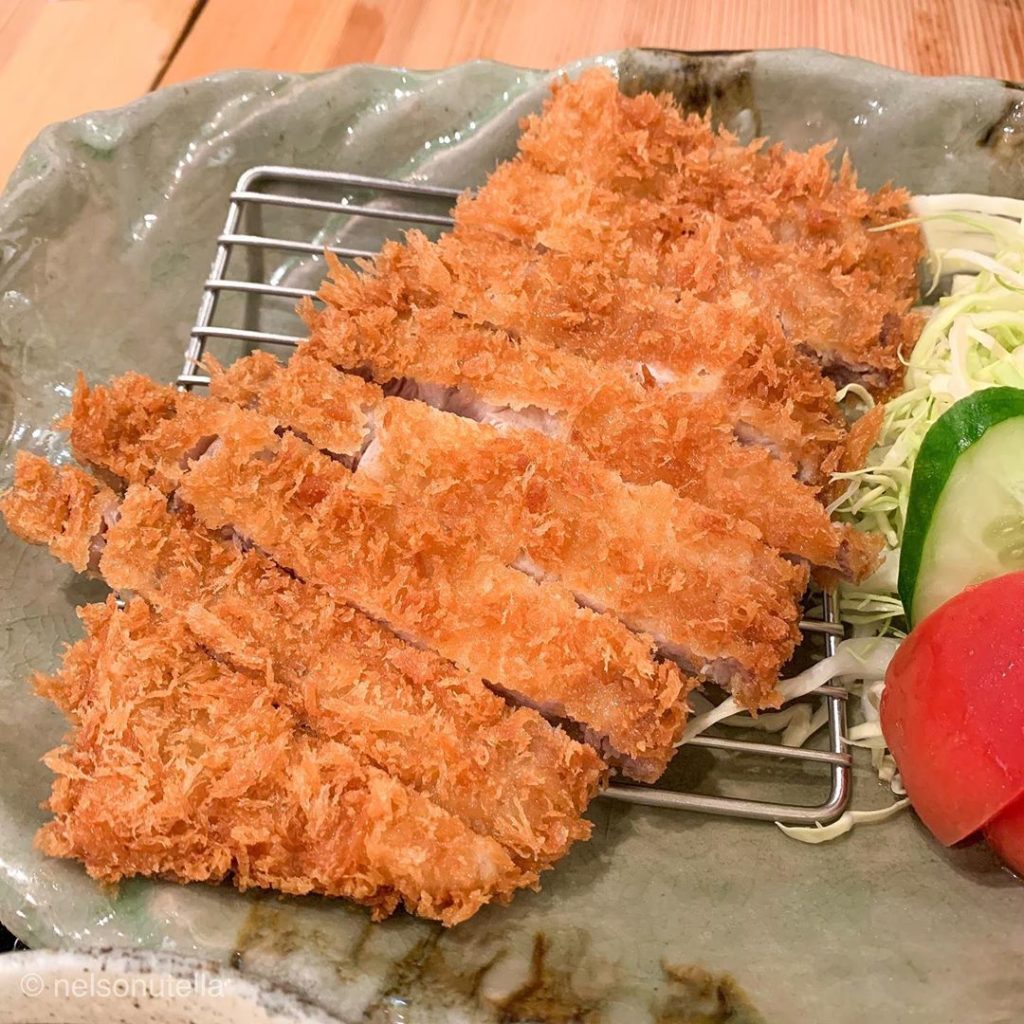 Ask any local about tonkatsu and they would almost immediately think of Tampopo. This comes as a surprise for first-timers, especially since their extensive menu boasts a whole range of dishes from fresh sashimi to hearty bowls of udon. Yet, it is their addictive golden cutlets that keep diners coming back for more each time. If you’re new to the restaurant, we highly recommend the Top Grade BP Tonkatsu Set, a Tampopo signature that makes use of cuts from the prized black pig. 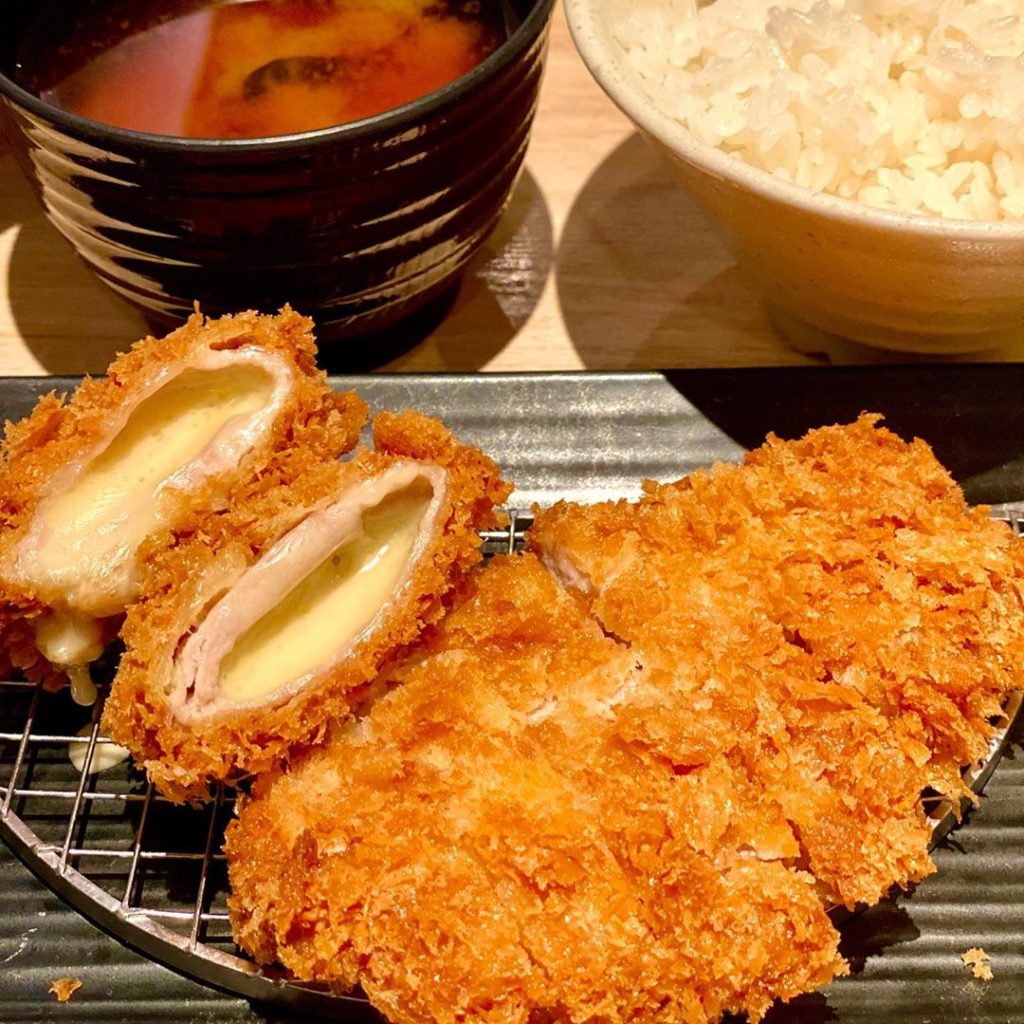 With over 500 stores worldwide, it’s safe to say that there must be something special about the tonkatsu from Saboten. From choices like the classic Tenderloin Katsu and Grated Radish Loin Katsu Gozen to the decadent Cheese Tenderloin & Loin Katsu Gozen, take your pick and have your fill with any of these battered beauties. Guests who prefer a variety should go for the Twin Tenderloin Gozen, a sharing platter that’s generously filled with tonkatsu, shrimp and salmon pieces.

Restaurants in Singapore Japanese Restaurants Singapore Tonkatsu
Jocelyn Tan
Writer
Jocelyn Tan is a travel and design writer who's probably indulging in serial killer podcasts or reading one too many books on East Asian history. When she actually gets to travel, you can find her attempting to stuff her entire wardrobe into her luggage. Yes, she's a chronic over-packer.
Travel Design