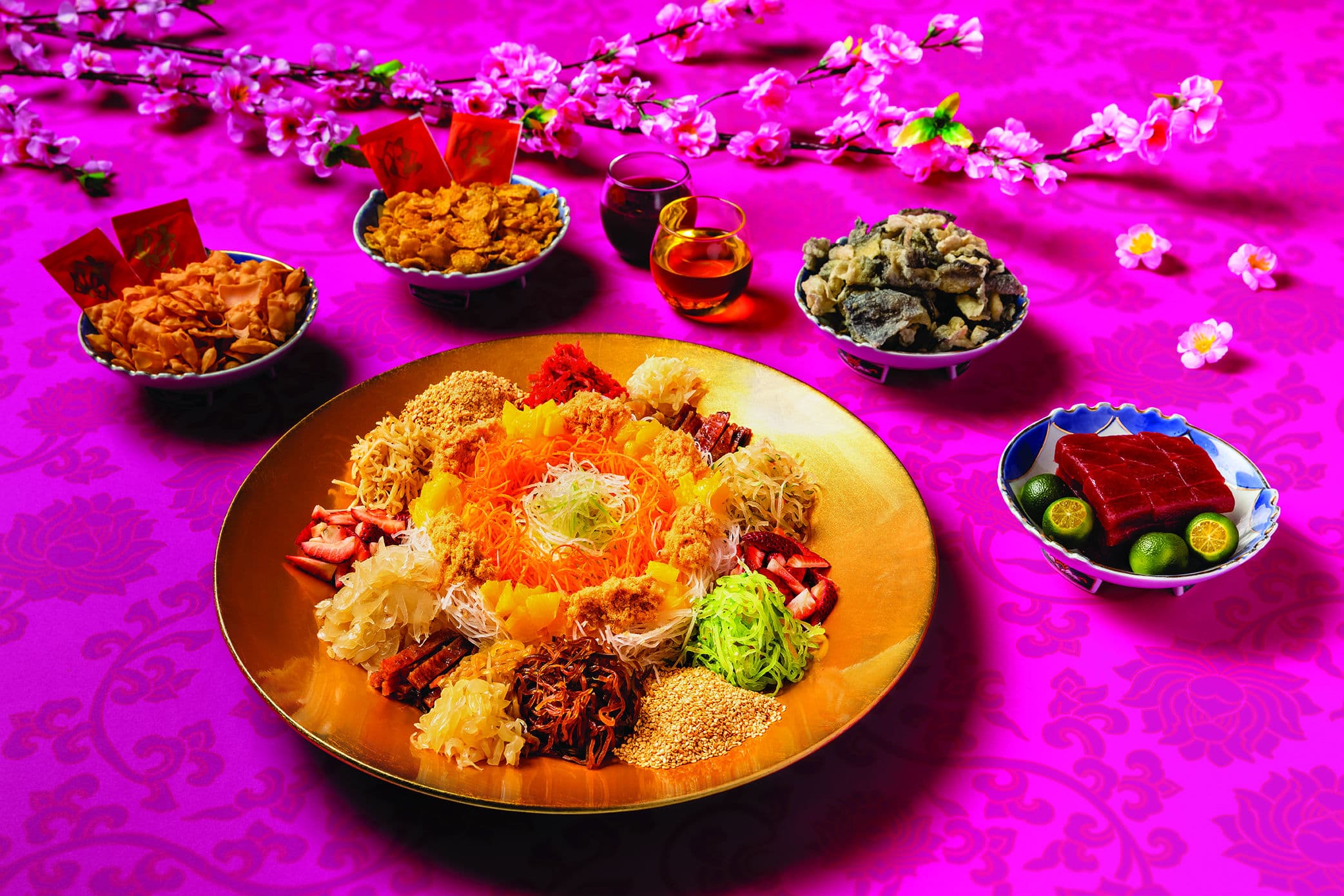 Toss up these yushengs for the upcoming Lunar New Year

Whether you like eating yu sheng, or not, there’s something about the tossing and shouting auspicious greetings (or lo hei) that adds to the festive spirit of Lunar New Year. It’s a uniquely Singaporean tradition, with Cantonese origins, that has stuck around since its introduction to heritage Chinese restaurants in the 1960s.

Since then, this festive salad hasn’t changed much — and for good reason, too. Each ingredient in the dish is added due to some symbolism or association with auspicious words. Slices of raw fish represented abundance, radish for youth, and deep-fried crisps for gold.

But with the health scare on raw fish four years ago, many restaurants are encouraged  to think out of the box and give the traditional starter its long-awaited creative boost. Over time, some have gone for alternatives to fish, or look to dining trends for inspiration. We pick out some of the fresh takes on yu sheng in the market now for the upcoming holidays.

Hong Kong’s Demon Chef, Alvin Leung, has been whipping up some modern takes on Southeast Asian dishes at his latest Singapore restaurant in Capitol Kempinski. For the Lunar New Year, Leung creates a colourful and luxurious yu sheng with fresh Japanese amberjack (hamachi), a fruit medley of orange, pineapple and starfruit and shredded vegetables. This is then tossed with toasted you tiao and mixed with a tart vinaigrette of yuzu and orange. The yu sheng is available for dine-in and takeaway at S$98++ (two to four diners) or $169++ (six to eight diners).

You can trust a one-Michelin-starred restaurant to do yu sheng right. To celebrate the Year of the Pig, Summer Palace’s version comes with eight chocolate piglets alongside traditional accompaniments. There are also eight different kinds of toppings to choose for the yu sheng, from abalone and fish lips, premium bird’s nest and pear, or salted egg yolk with crispy fish skin. Prices start for S$168++.

Yu sheng isn’t exclusive to just Chinese restaurants. American restaurant Yardbird is taking a Southern spin on the salad. Along with a mix of julienned carrots, cucumbers and radish, the salad has accompaniments of strawberry, pomelo, orange and pineapple. There’s also plum dressing with benne seed (read: sesame seed) to bring it all together. The only tossing you’ll do is on your plate, however — the Southern Yu Sheng is plated individually. The salad is part of a New Year special set menu at S$225++ per person.

Park Hotel Clarke Quay’s yu sheng is less of a salad than a heap of indulgence. There’s whole crayfish and slices of Parma ham hidden in between colourful layers of cabbage and radish. Instead of peanuts, there are sprinkles of kaffir leaves, pomelo and pickles ginger. It’s quite an impressive welcome for reunion dinner too. The yu sheng is part of Park Hotel’s New Year set menus, starting at S$378++ per table.

Contemporary Chinese restaurant Yellow Pot is pulling out a traditional yu sheng for reunion dinners. But following Six Senses’ sustainability motto, this dish is only prepared with fresh organic vegetables and sustainably-sourced seafood. For fish, there’s an option for King Ora salmon from New Zeland or raw hamachi. Now, you can have your yu sheng knowing that you did your part in saving Earth’ resources. The yu sheng is available as part of Yellow Pot’s New Year set menus, starting at S$68++ per person for lunch, and S$88++ per person for dinner.

The highlight of any yu sheng is the fish and there’s never enough for everyone on a typical plate. At Japanese restaurant Keyaki, you can be sure that all your diners have their fill of raw fish in their yu sheng pickings. The Wafu Yu Sheng (S$88 for two diners, S$138 for four diners) is a carefully arranged salad of daikon, seaweed and cucumbers with generous slabs of fresh tuna, salmon, yellowtail and tobiko. A premium version S$328 for eight to 10 diners) includes more luxurious toppings like lobster and uni.

The yu sheng is a colourful centrepiece to every Lunar New Year meal, though not necessarily the most picturesque — even before and after tossing. Min Jiang’s version might prove hard to annihilate with a storm of chopsticks. The dine-in special (S$168++ for 10 to 12 pax) is served on a plate bearing an intricate painting of pigs strolling under a sakura tree, illustrated by hand with sweet and sour piping jelly. Back to the yu sheng, there’s homemade bak kwa, salad leaves, strips of fried sweet potato and a dressing of plum sauce and calamansi juice infused with lemongrass and chilli padi. If you’re not a fan of yu sheng, you’ll find this option a good alternative.

At Forest, local chef Sam Leong goes for an old-school rendition of the yu sheng with fresh salmon, crispy whitebait and homemade citrus yuzu honey lime dressing. The dish is made a little special for diners at the restaurant too. Guests can customise their own yu sheng by picking their own ingredients from a tiered counter. Diners can enjoy the dish at S$88++ for two to four pax, S$108++ for five to eight pax, as well as S$128++ for nine pax and above.

Resorts World Sentosa Summer Palace MBS Forest Yu Sheng 15 stamford
Jasmine Tay
Senior Writer
Jasmine Tay is the dining, culture and jewellery writer. She makes fine silver jewellery and causes mini-explosions in the kitchen when she can't afford fancy dinners. Sometimes she tells people what she thinks about art, and binges on the music of Danzig when they don’t agree.
Dining Culture Jewellery

Food & Drink
Review: Mott 32 stands out from Singapore’s solemn Chinese fine dining restaurants
Beauty & Grooming
I tried Yours’ products for a month and I’m now a personalised skincare evangelist
Style
Girard-Perregaux engineers extreme transparency with the Quasar Light
Travel
7 best luxury hotels in Amsterdam
Beauty & Grooming
LSA Loves: How a Tom Ford perfume shocked my life into high gear
Living
Dry brushing is 2020’s trendy way of reinvigorating the skin
Style
How to nail tomboy chic like Kaia Gerber
Travel
Your guide to Le Marais, Paris’ most storied neighbourhood
Style
Our quintessential guide to cleaning and caring for your leather bags
Sign up for our newsletters to have the latest stories delivered straight to your inbox every week.