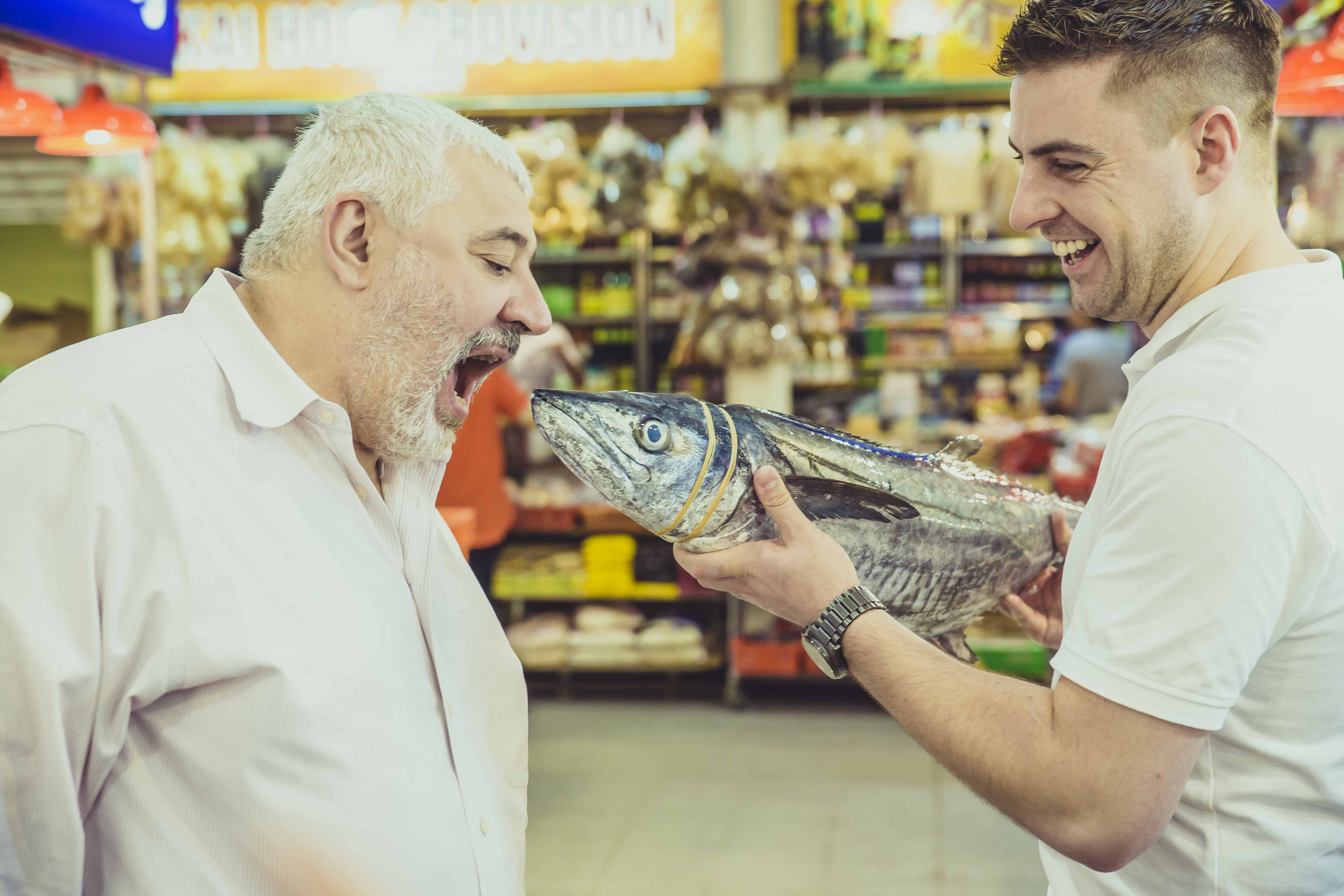 “Who are they?” a middle-aged woman asked us, her brow furrowed in confusion as she watched chefs Umberto Bombana and Kirk Westaway weaving their way through Tiong Bahru Market. It was 8am on a weekday, and the wet market was bustling with activity as throngs of shoppers made their way around the stalls to pick up the freshest produce.

The lady’s curiosity wasn’t unfounded — the two chefs stood out in the crowd, thanks to their 10-strong entourage comprising journalists, photographers and marketing (pun unintended) personnel. Pair that with the incessant click of cameras, and journalists (ourselves included) scrambling to catch up with the chefs, and it made for quite an unusual sight. One would inevitably assume that someone famous was in town, or that it was election season.

Perhaps the former would be somewhat accurate, as Bombana, the Italian chef-owner of three-Michelin-starred restaurant 8½ Otto e Mezzo Bombana in Hong Kong, and Westaway of one-Michelin-starred Jaan, are both accomplished chefs in their own right. They were at the market to shop for ingredients for a special culinary masterclass organised by S.Pellegrino and Acqua Panna. Just a couple days earlier, they had joined forces on a four-hands lunch and dinner menu at Jaan.

For the masterclass, they planned to replicate two dishes they had presented at their collaborative event — Bombana’s blue lobster with matsutake mushrooms, and Westaway’s dessert of chocolate espresso muscovado. As it was the Italian chef’s first time in a Singapore market, Westaway took the lead as they moved from stall to stall, examining various ingredients.

“Smell this,” he said, holding up a bunch of plump cherry tomatoes. Bombana leaned in and sniffed, before nodding in approval. “Very good.” The tomatoes were immediately placed in a basket alongside other vegetables such as bay leaves, parsley, lemon balm and eggplant. They next made their way to a fruiterer, where Bombana purchased a watermelon after carefully inspecting a few options, before heading to a fish stall, so Westaway could get a grouper head and sea bass for his team’s fish curry staff meal.

As we tailed the two chefs on their market visit, they offered us several tips on how to choose ingredients, and how to make the most out of a quick morning grocery run. 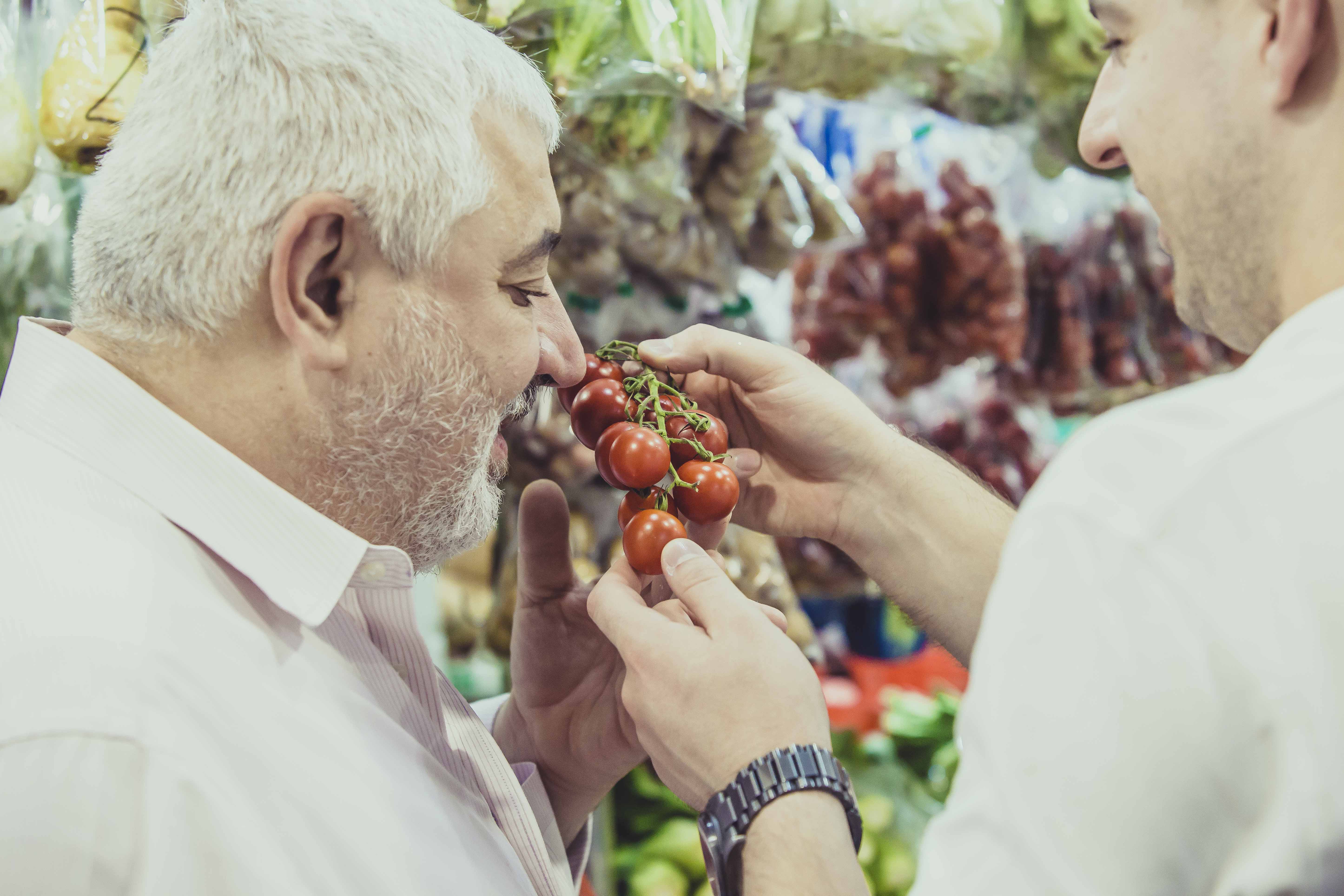 1
Get up close and personal with your vegetables

When it comes to vegetables, it always helps to smell and touch them, so you can gauge their freshness. For instance, fresh cherry tomatoes will have a naturally sweet fragrance and a firm texture. “For vegetables, the consistency has to be hard. It has to return to its natural shape quickly when you squeeze it. If it stays [dented], the vegetable is old,” said Bombana. 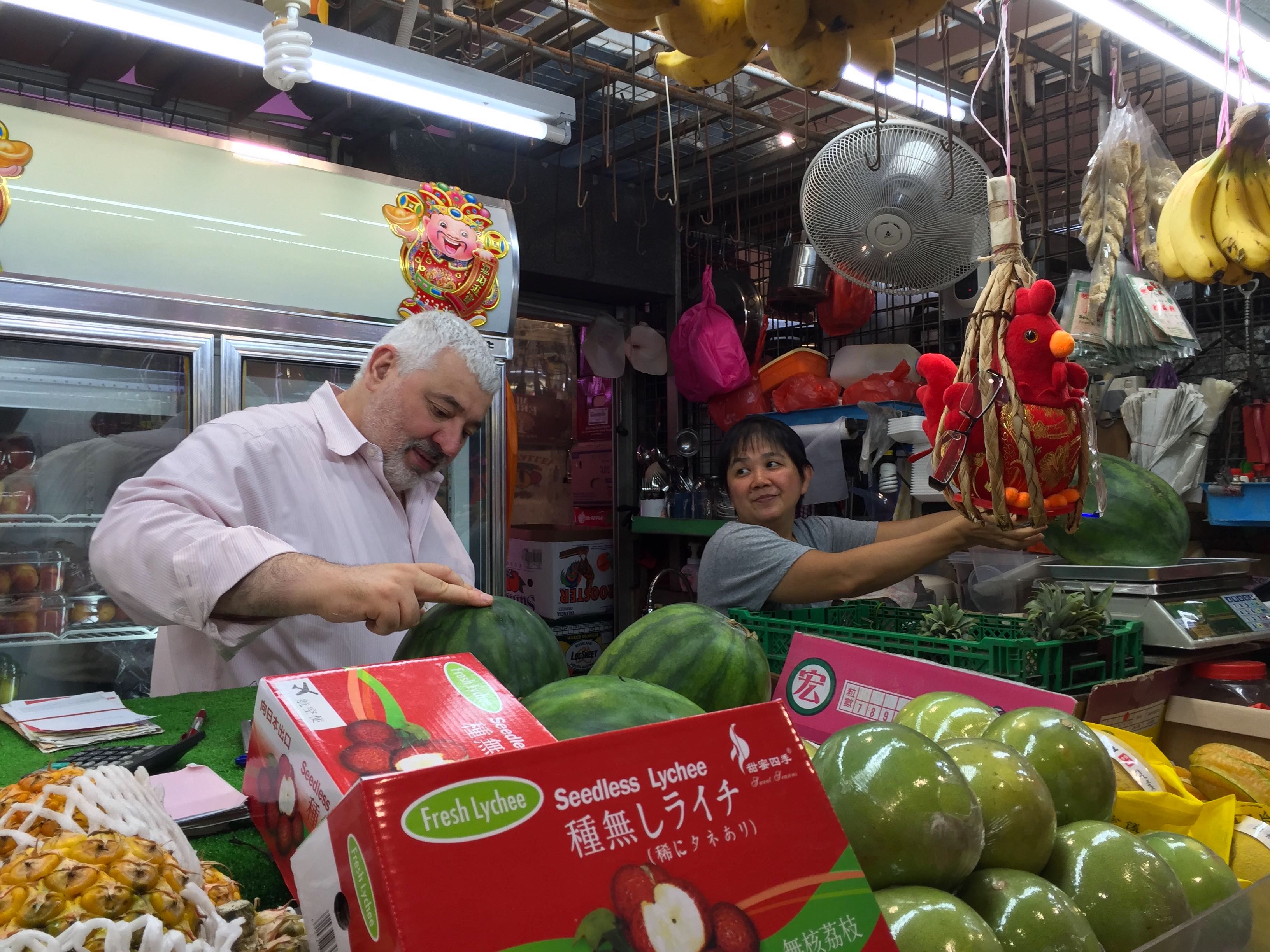 As tempting as it is to pick a flawless, completely unblemished fruit free of spots, sometimes it’s the imperfect options that taste the best. For watermelons, Bombana advises choosing one that has brown crust-like patches on its rind. “When there are small marks on the skin, it means the watermelon is sweet. These marks are left behind by bees when they [pollinate] the plant. The bees always choose the best ones,” he said. Another pro-tip: Knock on the watermelon to check if it sounds full — this is an indication that the fruit is ripe. 3
Don't be afraid to ask questions

Even the most experienced chefs will come across items they’ve never seen before in the market. For instance, Bombana and Westaway were fascinated by the Bombay Duck, a small, menacing-looking fish with sharp teeth. “It’s like a little sea monster!” exclaimed Westaway, brandishing it. Curious to know how it could be cooked, the chefs struck up a conversation with the friendly fishmonger, who explained that the fish can be fried, added into soup, or even used in curries. 4
Get your hands dirty when buying fish

For those who aren’t accustomed to handling fresh fish, the smell may be a little, well, fishy. So it’s natural to feel slightly reluctant to touch it. But according to Westaway, this is a necessary step in ascertaining the fish’s freshness. “Check the gills — they should be bright red and not slimy. The fish should also have a firm texture. See if the eyes are clear and fresh,” he said. At one of the fish stalls, Westaway gamely joined the fishmonger behind the counter and even assisted him in chopping up a piece of fish.