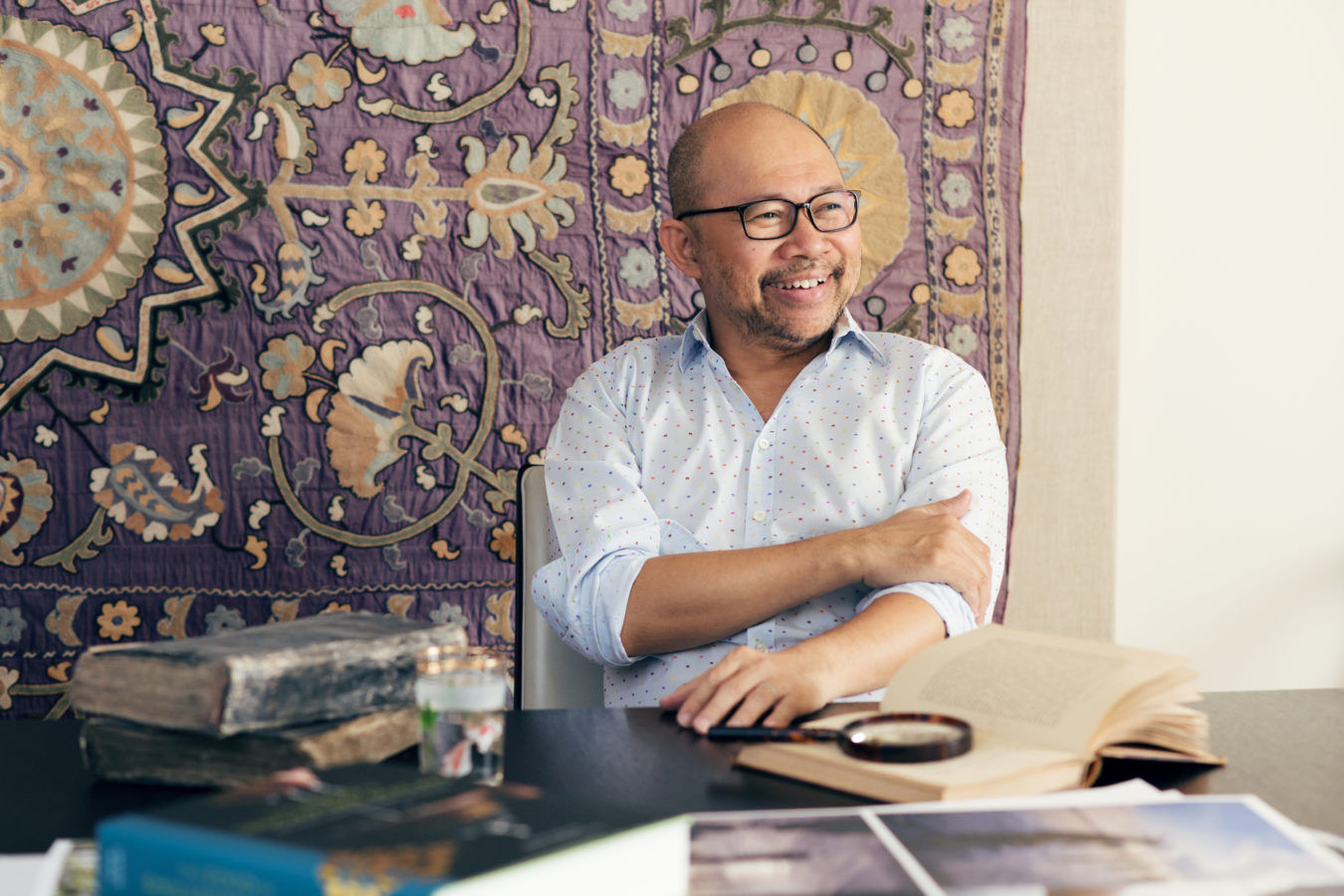 The author Khir Johari has a gentle, affable air of a very patient professor. He enjoys patterned shirts and speaks with a quietly excited manner that compiles you to pay attention.

But his genial exterior can barely disguise his encyclopaedic knowledge gleaned from 11 years of research for his book “The Food of Singapore Malays: Gastronomic Travels Through the Archipelago.”

Perhaps calling it a mere book is doing Johari’s work a disservice. Spanning 624 pages, it’s an authority on Malay gastronomy, spanning what he calls the “people, space and place” that influenced the heritage and cuisine of Singapore Malays.

Much of what we recognise as Malay food today started in Kampong Gelam, renamed today as Kampong Glam. It was where Malays from the region traded, mingled and settled, eventually becoming the cradle of what Johari calls “the Nusantara Kitchen,” a term encompassing Indonesia, Singapore and Malaysia.

Johari’s connection with food also started in the district. He grew up in the historic Gedung Kuning surrounded by four generations of family members. A six-year stint in teaching mathematics in California eventually catalysed him to write the book on Malay food, which he found “under-researched and under-recognised.”

Eleven years in the making, the book – which is now on its second print – is a wealth of historical, cultural and culinary depth, which Johari sourced from across the region and as far as London. In our conversation, we talked about the challenges of categorising dishes, the future of Malay food, and why he doesn’t like the name Nasi Lemak Burger.

See below for our interview with Khir Johari, then check out his recipe for Mee Siam here.

On the back cover, you explicitly state your book is not a cookbook. In your epilogue, however, you encourage people to cook the 32 recipes you included. I would assume calling it a cookbook would also have more mass appeal. Why did you choose this direction?

A cookbook definitely has a place. But I think for someone who enjoys exploring the genealogy of something, in this case the genealogy of food, it’s important to know why do we eat what we eat, and to provide context to explain. Why the ingredient? Why that technique? The etymology of a particular dish and its name are very important. That’s what the book is attempting to do. It’s more about cultural anthropology. The book attempts to explain Malays through food.

You mentioned that you visited countries like Indonesia and Malaysia to research dishes and techniques that no longer exist in Singapore. What is the state of their cuisine?

Some places really hang on to traditions. It’s very much still alive and kicking. I think Jakarta has been very good with that.

It’s a big country and there’s also a big celebration of regional food. When people go to the capital for school or for work, they bring with them their cuisine, and their understanding of it is still very much practiced where they come from.

You see that too. You see in KL a renewed interest in regional food. In the seventies and eighties, you don’t see, let’s say, nasi kerabu in Kelantan or on the east coast, but now it has garnered traction. I think it’s a celebration of food, understanding that there is so much diversity and ingenuity. It could be national pride. It could even be state pride. It could be that you’re from Terengganu, you move to KL, and you see there’s a potential to start selling Terengganu food there. So, socio-economics as well.

With the Chinese being the majority ethnic group in Singapore, has that led to Malay cuisine begin marginalised? Is more official support needed?

You don’t need a push from the top down. I believe in market forces too. The more people are exposed to Malay food, the more they are interested in unpacking and understanding it. For example, in Malay there’s a different nomenclature for different sotong. There is a particular sotong called sotong-sotong that’s the best to cook in its own ink. It is of a certain size, has a certain taste and texture. With this book alone, I’m getting messages from young people saying, ‘Hey, this is interesting. We never knew this. The next time we go to Geylang Market, we’ll have our eyes open.’ I hope the book triggers this sort of interest in young people.

Which is ironic because throughout the book I always got this sense of loss, this nostalgia.

We can’t deny this. We always have this yearning for grandma’s cooking. I think it’s quite natural if, as a kid, your dad has taken you to intertidal spaces and he picks certain things, but how do we go about doing it now? That said, I’m very heartened to see that at the Singapore Nature Society or the Singapore Heritage Society – I was a VP for SHS – a revival of wanting to know what it was like. Foraging is very sexy these days. Everyone wants to be doing it, or by extension, having an urban garden. If you go to the HDBs, they have these plots where people are growing all sorts of things.

It would be helpful for people to understand the source. When you call it Nasi Lemak Burger, do you mean burger with nasi lemak flavour, or nasi lemak served as a burger?
Khir Johari

In the West, there have been cases of people “discovering” ingredients that have been used by ethnic minority groups for centuries, leading to accusations of cultural appropriation. Do you see this happening with traditional Malay food?

This could happen. We have this innate curiosity. When people discover a certain herb, for example, they look for what they can do with it. When I was in California I would go foraging for mushrooms, then I would think about how I can use it in a Malay dish. Someone from a different ethnic group discovers something, and they’re curious to know how this is prepared by their Malay neighbours.

That would take a culturally curious person though.

I say the more, the merrier. But there’s such a thing as localisation or hybridisation. You take something and marry it with something else. You experiment. If you look at Malays in the urban setting, they’re very cosmopolitan, and they bring with them their prior knowledge. Anything that is delicious works. It might be something new, but if it’s yummy, people would want to replicate it. And over time you might see variations of the same thing.

This reminds me of a paragraph in your book where you called out the appropriation of traditional Malay food names for modern dishes. You use Nasi Lemak Burger as an example, saying it “reflects a confused state of understanding about the meanings and origins of our food.” What is a better way of describing these types of dishes?

I love innovation. I’m open to ideas. Fusion, putting things together: it’s as old as history. But it would be helpful for people to understand the source. When you call it Nasi Lemak Burger, do you mean burger with nasi lemak flavour, or nasi lemak served as a burger? You can innovate, but the thing that’s going to guide you are principles like understanding your flavour profile.

In your chapter about kueh, you talk about the challenges of classifying Malay confections as they don’t neatly fit into the Western idea of desserts. You cite savoury versions and that the fact that they’re served in a wide range of context, not just after dinner. Do we need a new framework for talking about cuisines that are not Western?

No, we just need different ways of talking about it. It’s about diversity. In this part of the world, you could have kueh for your breakfast, as a snack, during teatime. It could also be your after-meal dessert. And hence that’s why the chapter is called Dainties and Delights. It’s very convenient to call it dessert, but then we tend to project our understanding onto the category.

We are so good at knowing different parts of the tuna, but this is our food. It would be great for us to be acquainted with local names.
Khir Johari

You use the term sweetmeats to describe certain types of kueh, which I find very apt.

Yes! Sometimes they’re called that. It goes back to the definition of this. Can we find a word that is an overarching umbrella term? The closest I can find is penganan. Today everybody uses the word kueh, but the older word for it is penganan. And under that penganan umbrella, you have the sweetmeats. Of course, it doesn’t have to be only kueh. You can have a bowl of sweet porridge as well.

In the book, you talk about coming back from California and seeing the names of dishes mangled and changed, like otah versus the original otak-otak. How do you feel about it?

We are so good at knowing different parts of the tuna – otoro, chutoro – but this is our food. It would be great for us to be acquainted with local names. So back to the otak thing. I think it’s fun to have a group of kids and teach them what reduplication means with words. Otak is brain, otak-otak is that which looks like brains! It gives a new meaning, and it has reference. Layang is to glide, and layang-layang (a type of kueh): that which glides. Onde is a sphere. And onde-onde is that which is spherical. The Chinese in Java even refer to tangyuan as onde-onde.

One goal of your book is to document and celebrate Malay heritage. Did you consider writing it in Malay instead of English?

I can do that, but why preach to the choir? I want to have a wider appeal. I want to introduce Malay food beyond the shores of the archipelago. These days, with globalisation, we could be sitting in Singapore and be interested in Oaxacan cuisine. But this book is a Singapore book. It’s not just about the food, but of the culture and of the people of the region. I feel English is the appropriate medium for that.

How hopeful do you feel about the future of Malay food?

I’m hopeful, that’s why we have the book! It’s been so heartwarming to receive notes on Instagram, on Facebook, from people I don’t know. Young people. Not necessarily Malay. They’re trying out recipes. It’s only 32 recipes, but with the background, it’s more meaningful. It’s almost like a degustation, a nice cross section of so many different things. Hopefully it’s a good start to get the conversation going.

The second print of “The Food of Singapore Malays: Gastronomic Travels Through the Archipelago” by Khir Johari is scheduled to reach major bookstores by the third week of March 2022. Alternatively, get it on Amazon (S$85.60).