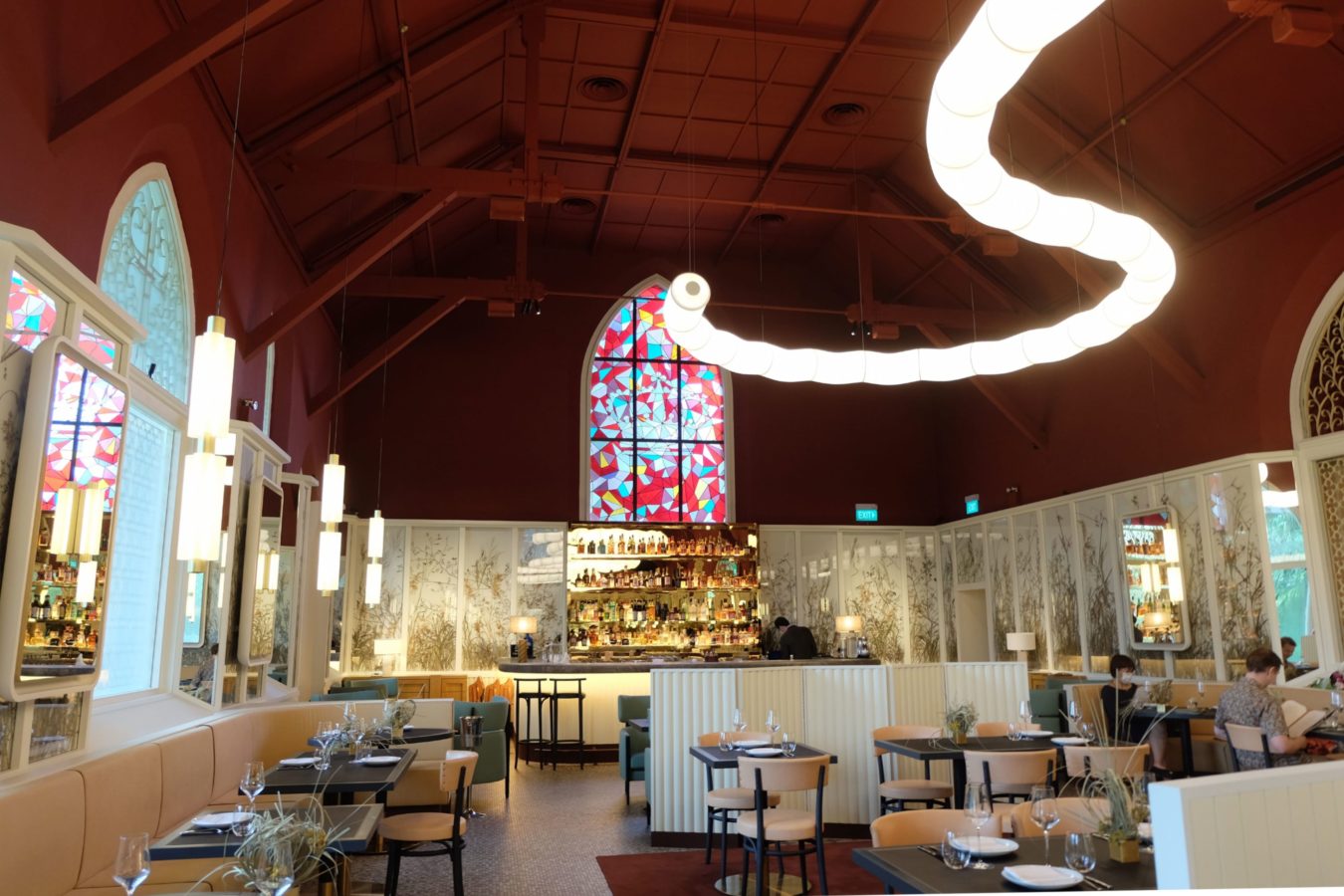 What to expect at Claudine, chef Julien Royer’s latest concept

A trip to three Michelin-starred Odette in Singapore is a treat for many. Chef Julien Royer, however, now has a new establishment besides the fine-dining locale on the cards for when you’re searching for a gastronomic good time — minus the course menu.

A quick note for the uninitiated, however: this may be chef Julien Royer’s concept, but you probably won’t find him at the back of the restaurant cooking up a storm for guests. He has instead, entrusted the open kitchen to the good hands of Executive chef Julien Mercier and Chef de cuisine Loïc Portalier. The former is longtime friend of his that has trained under the tutelage of Pierre Gagnaire at Sketch, and the latter was sous chef at Louise, chef Julien Royer’s one Michelin-starred establishment in Hong Kong.

Diners will find some sense of familiarity in the space. It is after all, located in the same former military chapel built in the 1930s that once housed The White Rabbit. If you were expecting the same white painted walls, however, you’ll be gravely mistaken. The design of the naturally-lit space comes under the purview of Nice Projects — co-founded by Singapore-born Sacha Leong and Simone McEwan — who’ve fashioned the restaurant in a cosy, earthy red, complemented by an airy open kitchen and a classy bar on both ends of the heritage building. They managed all this remotely from London and Sydney.

While the iconic glass stained window, mosaic floor tiles and wrought-iron grilles have remained untouched, the cosmetic refresh is obvious at first glance. Botanical panels — made of locally sourced plants — from This Humid House wrap around the walls of the restaurant, and a snaky 15-metre paper lantern also weaves through the entirety of the ceiling.

The friendly staff and congenial atmosphere here ties in with its description of “an intimate side of French cuisine, inspired by honest home-cooking and convivial meals” but you won’t find your ultra causal bistro fare and prices here — this is, after all, a Julien Royer concept. Amidst the extensive menu, we’re highlighting some of our favourites so you’ll be able to wade to through the list with ease on your first visit.

The Charred Leeks starter, for instance, is a moreish plate that spotlights the modest leek, a beautiful number that’ll convince even the most meat-loving of individuals. Here, the vegetable is sous-vide to tender whirls, before it’s charred to release some of that beautiful smokey flavour and topped with an oil-based Ravigote sauce. Creamy, hearty and wonderfully addictive.

Other appetisers that are perfect for those not big on sharing include the Mozambique Langoustine, a plate that’s Asian in influence — think sugar snap peas, a stuffed crustacean dumpling and perfectly pan-roasted langoustine that sits neatly in a pool of a silky seafood bisque.

If you’re after a similar taste of the ocean for the entire table, however, we suggest a platter of the Claudine Bouillabaisse. While the nourishing, wholesome nature of the classic Provençal speciality endures in Claudine’s rendition of the dish, its decadent ingredients cements this fish stew as a course that separates it from its working class roots. Think a generous serving of John Dory, razor clam, mussel, squid, scallops, carabinero shrimp — with their sinfully juicy heads still intact, mind you — fennel and potatoes, best had with a slice of baguette and rouille.

Yet, if there’s only one dish you have to order on your first and subsequent visits, it’d be the Vol-au-Vent. Chef Julien Royer, we were told, has memories of his mother cooking this for him on special occasions, and it’s also something he loves to eat on a day off or to cook for friends at home. Here, a moat of velvety mushroom jus — reduced with a touch of cream, and cognac — surrounds a hollowed puff pastry tower, before it’s packed with a medley of veal sweetbreads, morel, chicken mousse quenelle, mushroom, cockscomb and pearl onion.

Still hungry? Perhaps a serving of the Chou Farci will do you good. A recipe from his mother, the cabbage that’s typically stuffed with minced pork is now generously brimming with layers of Gascon bacon, foie gras, and prune for an indulgent touch.

Desserts like the Baked Alaska and the île Flottante are made to impress. After all, who’s to say no to a flambé at the table or an orange blossom vanilla custard that spills out when cut from a cloud-like poached meringue?

Yet, our dessert of choice to end of the meal with is the humble “Pariterole.” A cross between the Paris-Brest and profiteroles, two of Julien Royer’s favourite desserts, the “Pariteroles” come in a ring of five, dressed with a beautiful crisp, toasted-caramelised pecan praline. Rather than an ice-cream to meld the centre, a light, parfait-like New Caledonia vanilla cream sits in between the choux, elevated by a warm, luscious chocolate cream that’s poured over at the table.

Claudine, is located at 39C Harding Road, Singapore 249541. Advance reservations for tables two months in advance are open daily. A small number of walk-ins are available.

Dempsey Hill Julien Royer french fare Claudine
Jocelyn Tan
Senior Writer
Jocelyn Tan is a travel and design writer who's probably indulging in serial killer podcasts or reading one too many books on East Asian history. When she actually gets to travel, you can find her attempting to stuff her entire wardrobe into her luggage. Yes, she's a chronic over-packer.
Travel Design