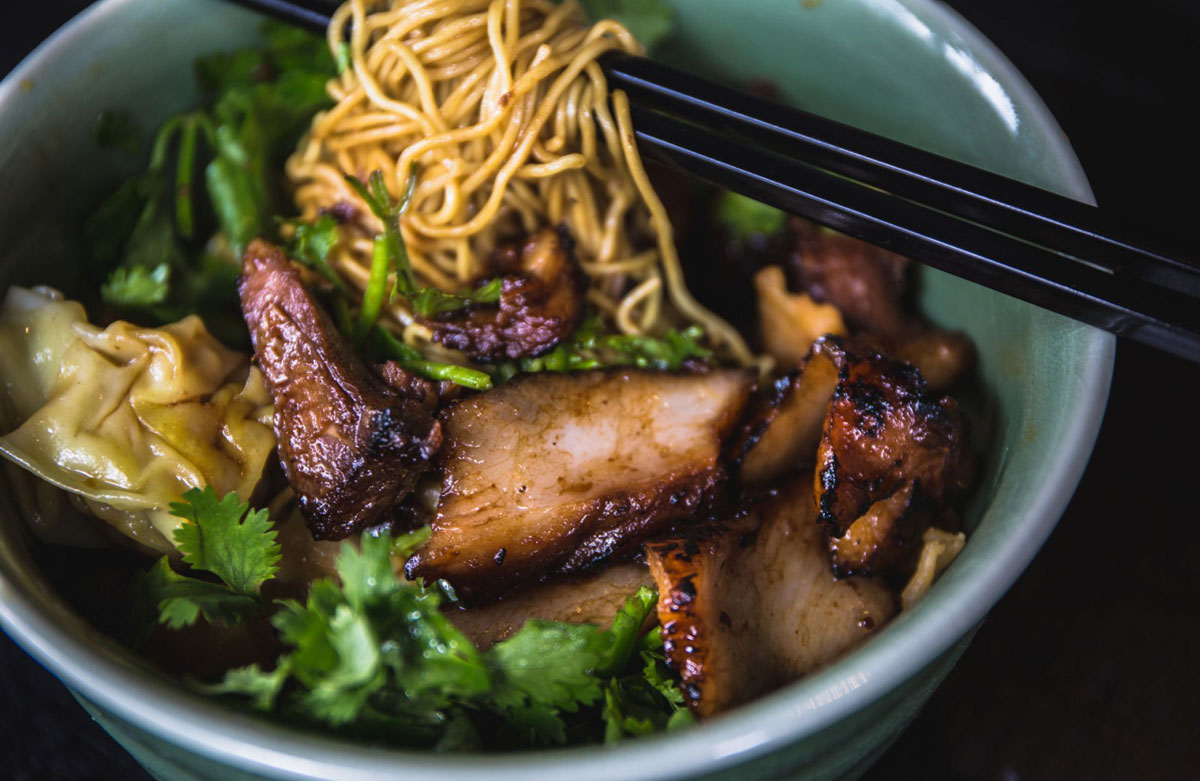 Where to find the best wanton noodles in Singapore

Wanton noodles, known colloquially as wanton mee, may hail from Cantonese cuisine, but its Southeast Asian permutation is markedly different from the soupy original.

In Singapore, Malaysia and even Thailand, wanton noodles connote dry egg noodles dressed in a dark sauce and chilli mix, topped with slivers of fatty barbecued pork, still tinged by woodsmoke, handmade shrimp dumplings and the cautionary strand of green leafy vegetables (because the presence of greens imply balance, obviously). All of these versions of wanton noodles bear their own idiosyncrasies, and all of these different takes coalesce in Singapore.

Whether it’s breakfast, lunch, dinner or supper, a good bowl of wanton noodles checks any of those boxes. We’ve rounded up some of the spots we deem serve the best wanton noodles in Singapore, the next time you’re hit with a craving.

Food & Drink
Where to find the best prawn noodles in Singapore 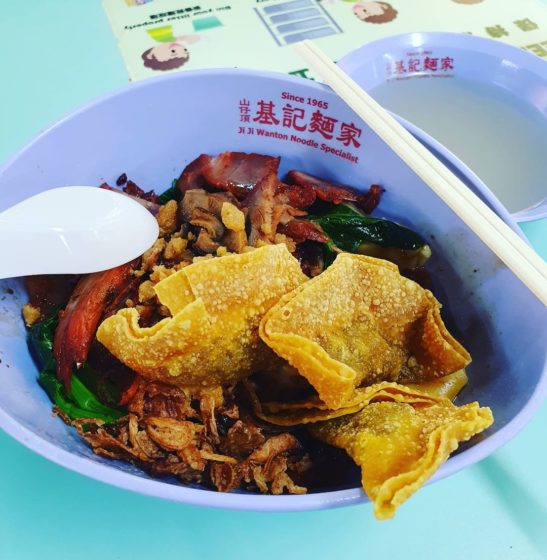 Snaking queues are the norm at Ji Ji Wanton Noodle Specialist, and for good reason, given that this stall has been running since 1965, and remains the pitstop for Singapore’s bestselling wanton noodles. Ji Ji serves a family recipe, using thicker, chewier egg noodles that taste less oily than your run-of-the-mill version, slivers of sweet char siew and wantons that snap with every bite. 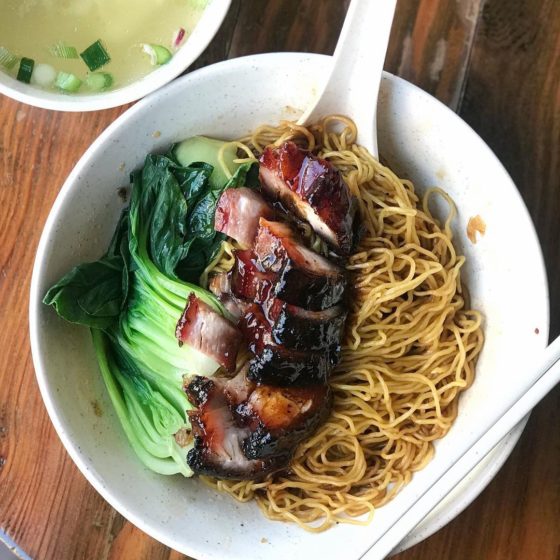 Though 88 Hong Kong Roast Meat Specialists are best known for their namesake offerings, they also make a mean wanton noodle dish, topped with generous chunks of caramelised char siew nestling a bed of noodles coated in a sticky, spicy dark sauce. There is even the option to add crispy pork belly as an additional topping — one we’d highly recommend. 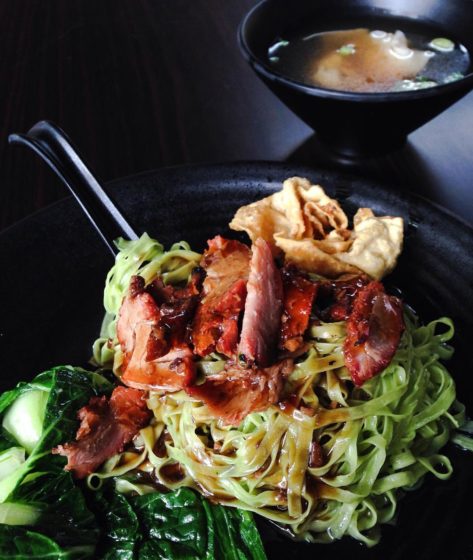 Wong Kee Wanton Noodles & Roasted Delights is another close contender for the most popular wanton noodles in Singapore, and anyone who has eaten there will testify to that. The wantons served with the noodle dish are the real star here, so generously portioned and teeming with shrimp, spring onion and pork, cooked to chewy glory. Wong Kee is also well-known for offering spinach noodles instead of the usual egg noodles for those feeling slightly health-conscious. 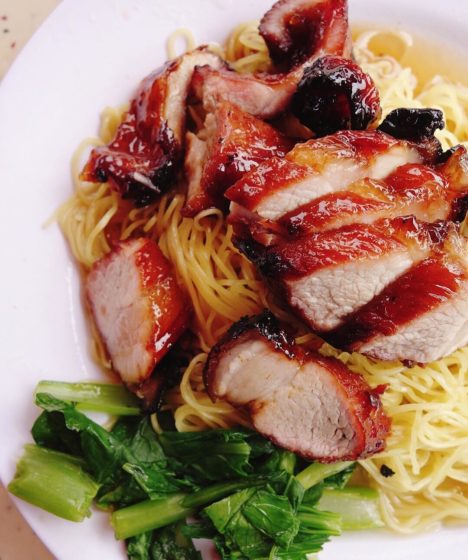 Tiong Bahru Market’s Zhong Yu Yuan Wanton Mee is perpetually plagued by a lengthy queue, so expect to wait at least 20 minutes for a bowl of wanton noodles, featuring their famous bu jian tian char siew, made from the extra tender cut that is the pig’s armpit. The stall sells out by noon each day, so be sure to come by early. 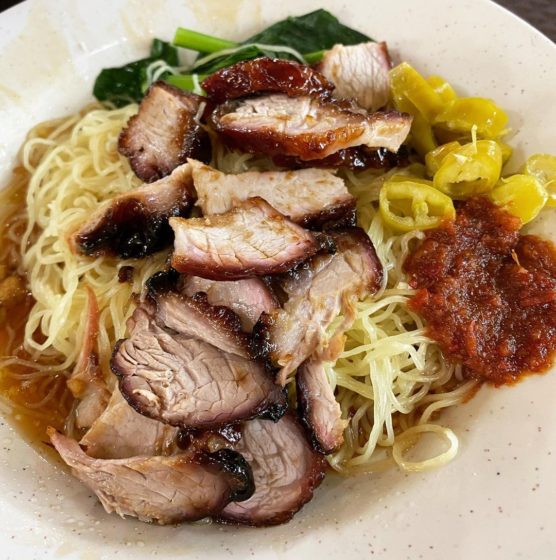 It was only a matter of time before Fei Fei Roasted Noodle got its Michelin Bib Gourmand accolade. The stall at Yuhua Village Market and Food Centre has been a breakfast staple for years — but only if you get there early enough. Because it’s only opened for a few hours a day, the wanton noodles here are often sold out before its closing time at 12.30pm. Here, the stall serves its angel hair-thick eggy noodles al dente, which is laced with an aromatic anchovy-based broth and topped with tender charcoal-roasted char siew and wantons with fresh shrimps — all for a mere S$3. 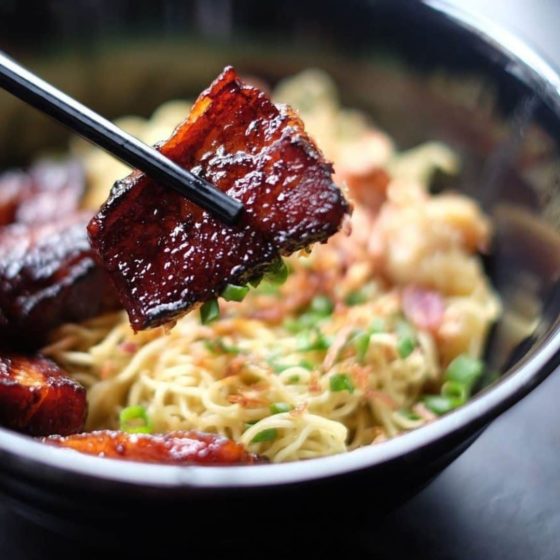 When Wanton Seng’s Noodle Bar opened, its very idea seemed blasphemous — a build-your-own-wanton-noodle restaurant in the heart of the Central Business District, where a humble bowl of noodles with all the fixings cost an upwards of S$7. The restaurant might have closed down but the team’s still wants to offer the best wanton mee in the CBD with a smaller outpost, Wanton Seng’s Express. Like its predecessor, you’ll find some of the finest pork belly char siew you’ll ever encounter. Each moreish slice is teeming with sweet barbecue marinade, wood smoke, and caramelised pork fat, and topped over a bed of springy noodles and juicy wantons.

Address
Guoco Tower, 7 Wallich Street Singapore 078881 #B2-27
Phone
+65 8138 5175
Find out more
Dining Hawker Food wanton noodles
Beatrice Bowers
Features Editor
Beatrice Bowers writes about beauty, drinks, and other nice things. When not bound to her keyboard, she moonlights as a Niffler for novels and can be found en route to bankruptcy at your nearest bookstore. Don't tell her boss.
Drinks Beauty